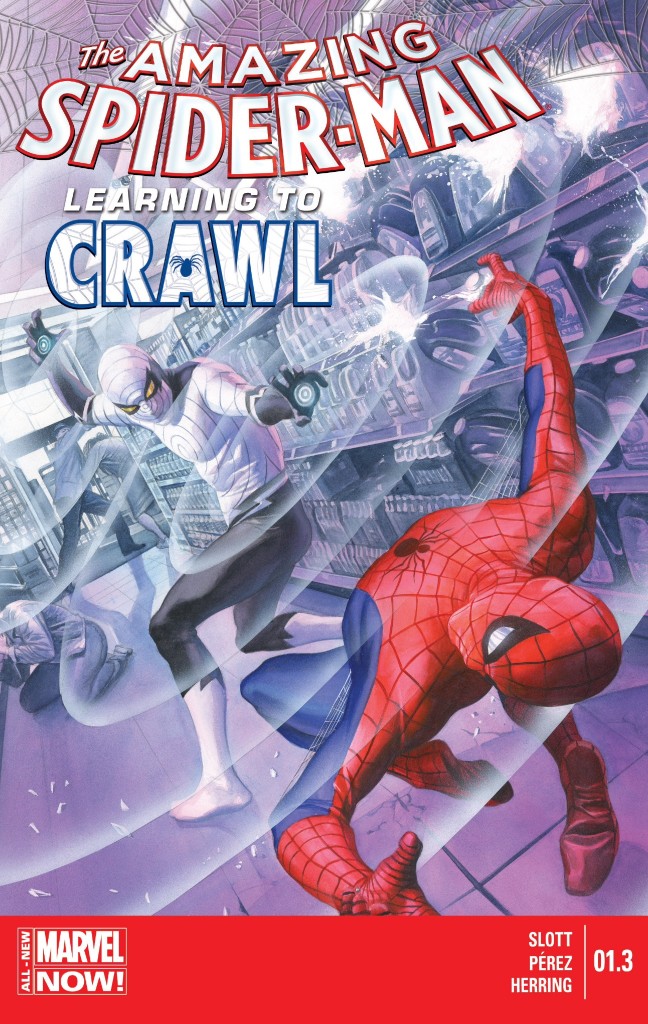 After reaching the middle chapter of the Dan Slott/Ramon Perez “Learning to Crawl” miniseries, its become abundantly clear to me that the storytelling is at its sharpest and most engaging when the focus is its original elements – i.e. Clayton Cole/Clash – while things seem to grind to a halt when the script seemingly adds minor, quibbling embellishments to the iconic Stan Lee/Steve Ditko text.

As I mentioned in my write-up on Amazing Spider-Man #1.2 last month, I still have some concerns about what this series is ultimately trying to achieve, and who it is catering to – hardcore fans who obsess over minutia or newbies who are unfamiliar with the Spider-Man mythos. But that doesn’t change the fact that I legitimately enjoyed parts of Amazing Spider-Man #1.3; primarily because Slott’s script finally goes through the dirty work of giving Cole some needed characterization and motivation.

The opening sequence involving Cole, half-in-costume, loudly brooding in his room about his failed encounter with Spider-Man one issues earlier has the makings of a rather riveting supervillain origin story. It’s the naïve teenager who sees costumes and powers as a means to become rich and famous, rather than actually using his gifts for the benefit of the greater good. 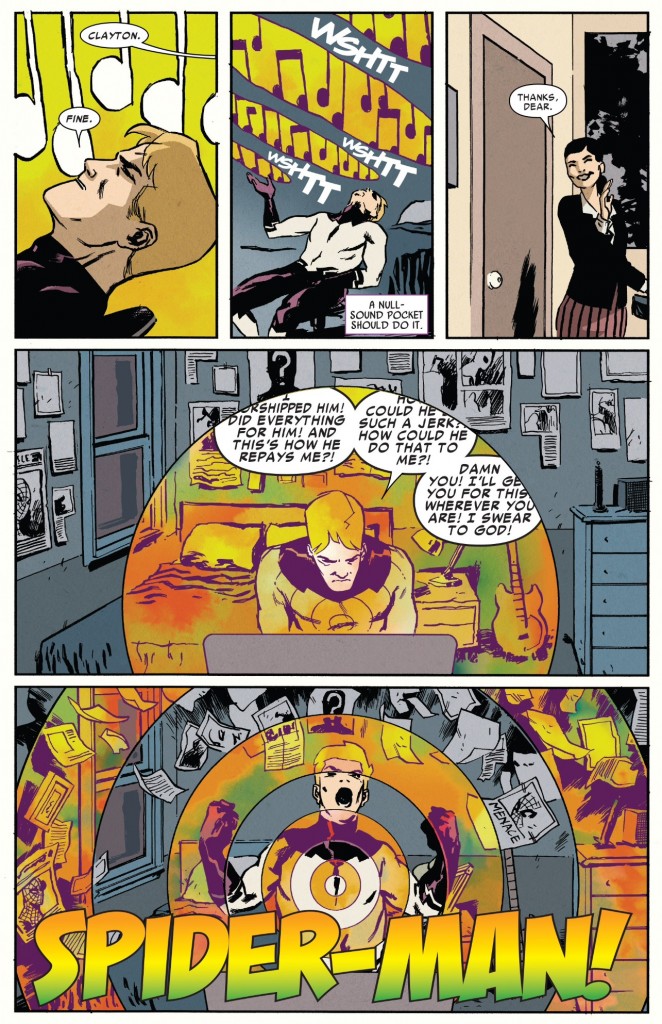 Or, as this series has frequently spelled out for readers through its use of visual and narrative juxtaposition, Clayton is a reflection of what Peter would have likely become if he had just stopped that damn burglar and Uncle Ben wasn’t murdered.

Instead, Peter continues to live precariously, always coming up with some kind of excuse to explain away his bizarre, absent behavior. It’s completely fitting that as Cole sits in his room, plotting his next move against Spider-Man, his parents obliviously just knock on the door and ask him to keep the noise down, while Peter’s first scene in ASM #1.3 involves him seeing that Aunt May has unlocked his bedroom door and potentially learned his secret identity.

This is the kind of dynamic I want to read about in “Learning to Crawl.” The majority of the very best villains from the Lee/Ditko run were those that spit in the face of the power/responsibility mantra. Characters like Doc Ock, Sandman, Electro and Vulture all possessed extraordinarily abilities, whether they be via accident or mechanical enhancements. And yet they make a distinct choice to use these powers to rob banks (or take over the world if you’re Otto). Defining these characters this way makes their pairing with Spider-Man more logical and compelling. It’s power and responsibility versus power and no responsibility. Ying and Yang. It’s simple, but it works. 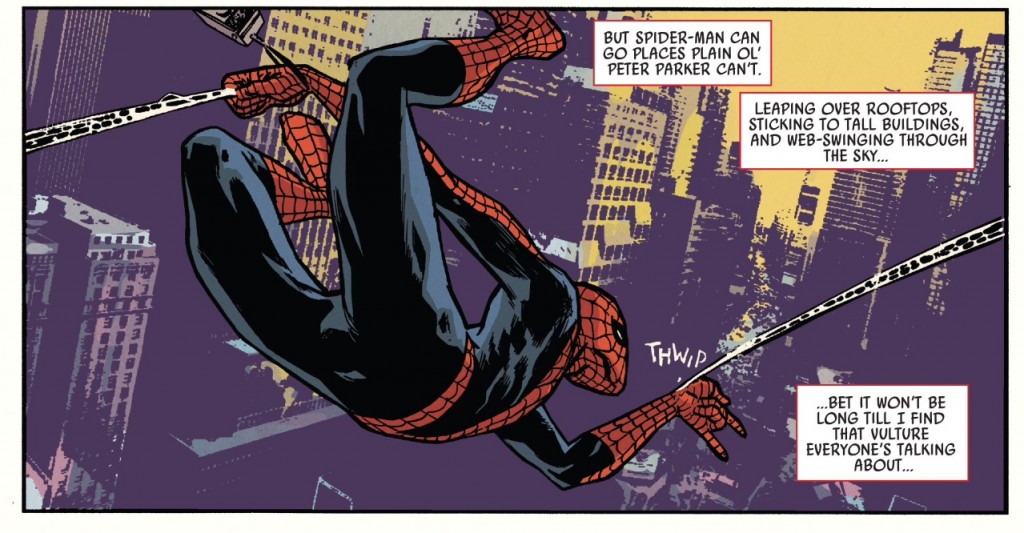 With Clayton, the character point I keep coming back to is the fact that there’s a sense of entitlement with this kid. And beyond that, there also seems to be some stability in his life. Peter, even before his Uncle was murdered, had to endure the childhood trauma of his parent’s death/disappearance. Even if May and Ben were the best parents a kid could ask for, as we later learned in stories like “The Child Within,” Peter’s abandonment scarred him.

Unfortunately, ASM #1.3 hits the skids once things move away from Clayton and instead start traversing the established continuity of the original ASM #1-2. Not to sound like a broken record after what I wrote last month, but I can’t say I’ve ever sat down and thought to myself, “hmmm… we really need a story that details why Peter never just submitted his web shooters for a science fair project when he was at Midtown High School.” And as beautiful as Perez’s double page spread depicting Spidey’s very first battle with the Vulture from ASM #2, these little “peek-ins” really don’t serve the story, and instead just appear to be paying lip service to fans who only read stories like “Learning to Crawl” to pour over where things fit in to “continuity.” 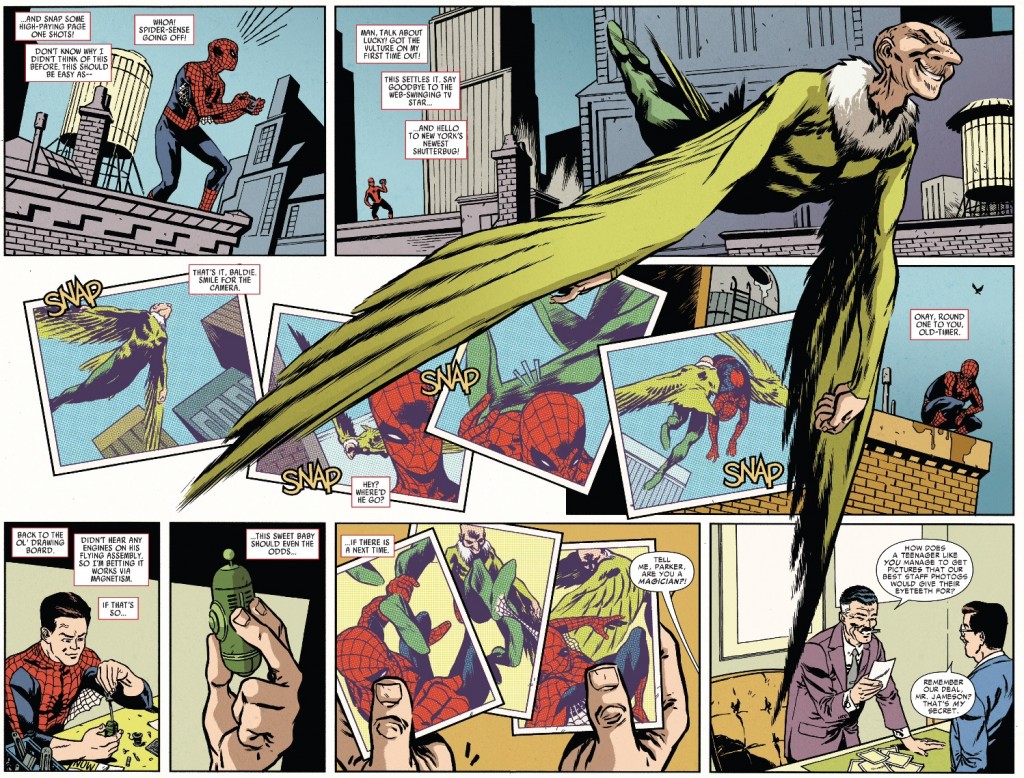 I don’t think Slott is doing this because he’s making a statement that he can do Spidey’s origin story better than Stan and Steve – if anything, I’ve criticized him for being a bit too reverential and afraid to take risks. This is definitely not John Byrne’s Chapter One. But all the same, what are these moments supposed to be doing for my overall appreciation of Spider-Man’s early years? Is Aunt May being present for a fight between Spider-Man and Clash supposed to provide the appropriate amount of clarity and explanation as to why she’s never liked Spider-Man? I think Lee/Ditko were pretty clear about that – she’s an older, more conservative woman and between that and J. Jonah Jameson’s smear campaign against Spider-Man, she just doesn’t trust him.  No more detail required. 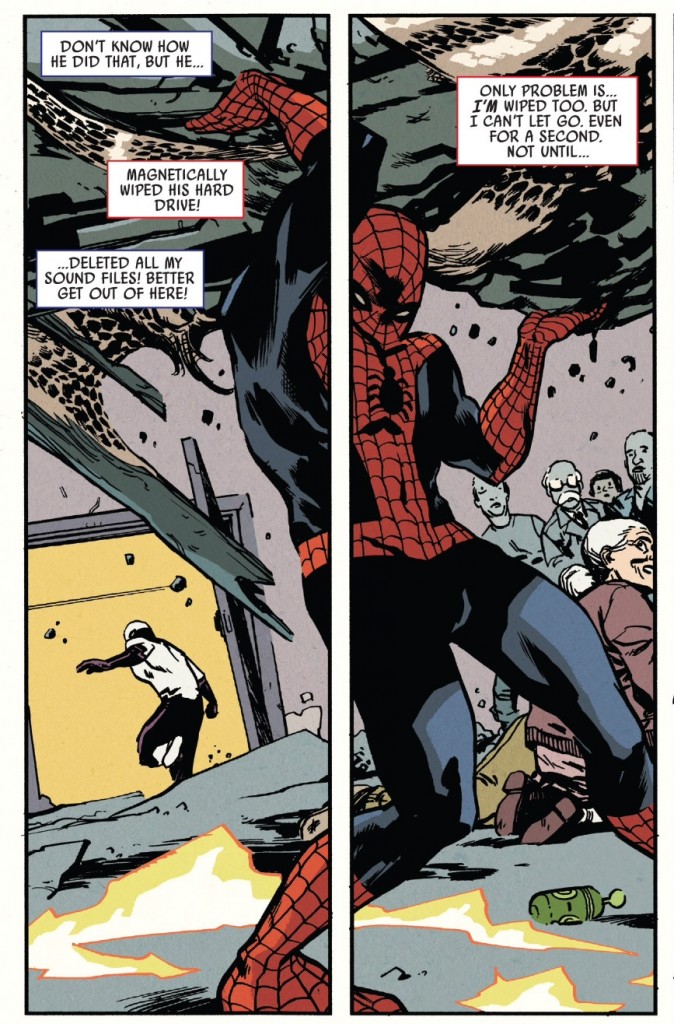 It’s because of these lingering problems that show no sign of being resolved that I just don’t see “Learning to Crawl” being anything other than a blip on the overall Spider-Man radar when it’s all said and done. It’s nowhere near as infuriating as Chapter One, but it lacks the bold, game-changing qualities of some of the more famous flashback stories like “Batman: Year One,” Daredevil: The Man Without Fear, or even the underrated Man Out of Time miniseries about Captain America.