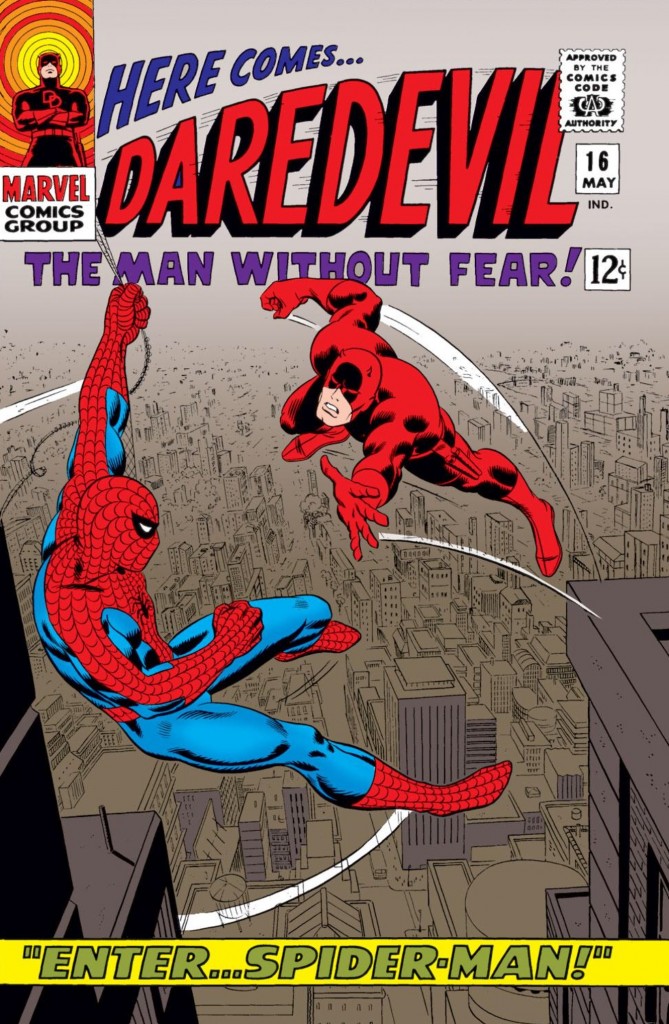 Ask fans of Spider-Man and Daredevil to rank the definitive artists for each of these two heroes and somewhere near the top of these lists you’ll likely see John Romita Sr., for the Webhead and Frank Miller for Ol’ Hornhead.  And yet, in a unique twist of fate that has long fascinated me (and hopefully you or I’m about to waste everyone’s time with this post), JRSR’s first opportunity penciling Spider-Man came during a two-part arc in Daredevil #16-17 in 1966 and Miller’s first opportunity with the “Man Without Fear” came during a two issue run in Peter Parker The Spectacular Spider-Man #27-28 in 1979.

In both instances, Romita and Miller were essentially providing “guest” pencils on a short-term basis until long-term solutions were found for the two series. Instead, both used these short-term opportunities to transition to something that would go on to define each of them as true artistic icons for generations. And that’s not even taking into account the dramatic changes in look and tone Romita and Miller brought to Spider-Man and Daredevil respectively. 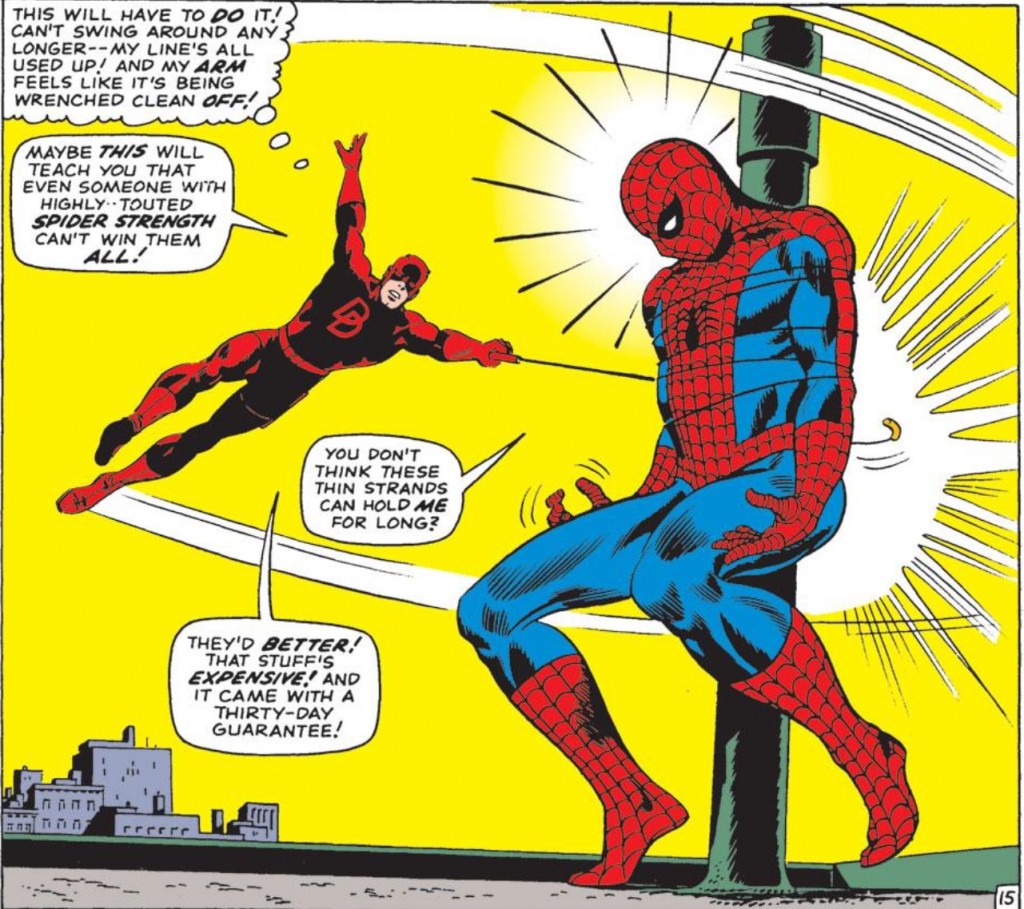 Romita’s metamorphosis from guest penciler to greatest Spider-Man artist of all time was a gradual one. Stan Lee first asked Romita to illustrate Daredevil for issue #12 and after a few months, Stan started pushing JRSR to put together a Spider-Man/Daredevil team-up in order to get a sense of how he would interpret the character. Romita, very famously, initially imitated Steve Ditko’s thin-line style for Spidey out of respect for Ditko’s impact on the Spider-Verse. During an interview from the late 1980s, Romita likened the experience to being asked to draw Dick Tracy in a Daredevil comic:

“If Dick Tracy were guest starring in Daredevil, I would have tried to assimilate that different technique and done him like Chester Gould. That was the way I thought Spider-Man should be done, like Ditko.”

Romita is either being incredibly modest or oblivious to just how dramatically different his version of Spider-Man is compared to Ditko’s. Starting with Daredevil #16’s first few pages, many of Romita’s trademark redesigns for Spidey are on full display: more refined muscular definition, more dynamic action sequences and fights, and looser, less densely-plotted layouts. 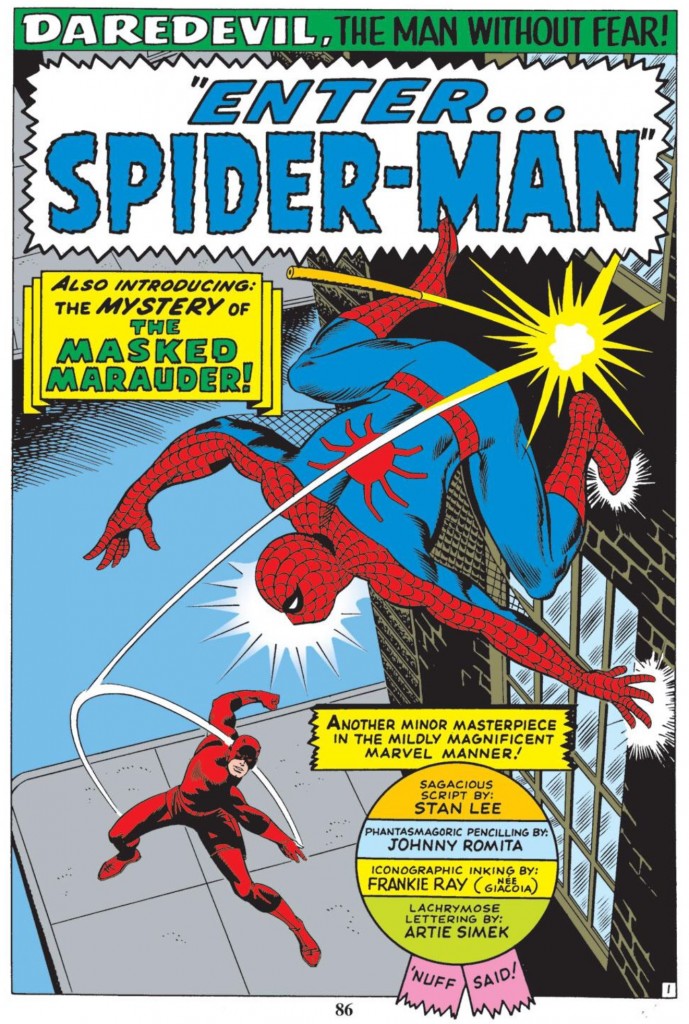 And that’s just referring to Romita’s artwork featuring Spidey in costume. The biggest difference between JRSR and Ditko was how he illustrated Peter and Spidey’s supporting, non-superhero cast. Romita softened the cast’s physical features and veered away from Ditko’s overly-cartoony look. In Daredevil #16, we see visuals of Peter, J. Jonah Jameson and Aunt May, and Romita’s distinct choices for the look of these characters is already on display. Peter, for lack of a better phrase, is a good-looking dude (so much so, Stan used to scold Romita for making the “professional wallflower” resemble a geeky GQ model), while May and Jonah look considerably more realistic with more rounded faces and less exaggerated facial expressions. 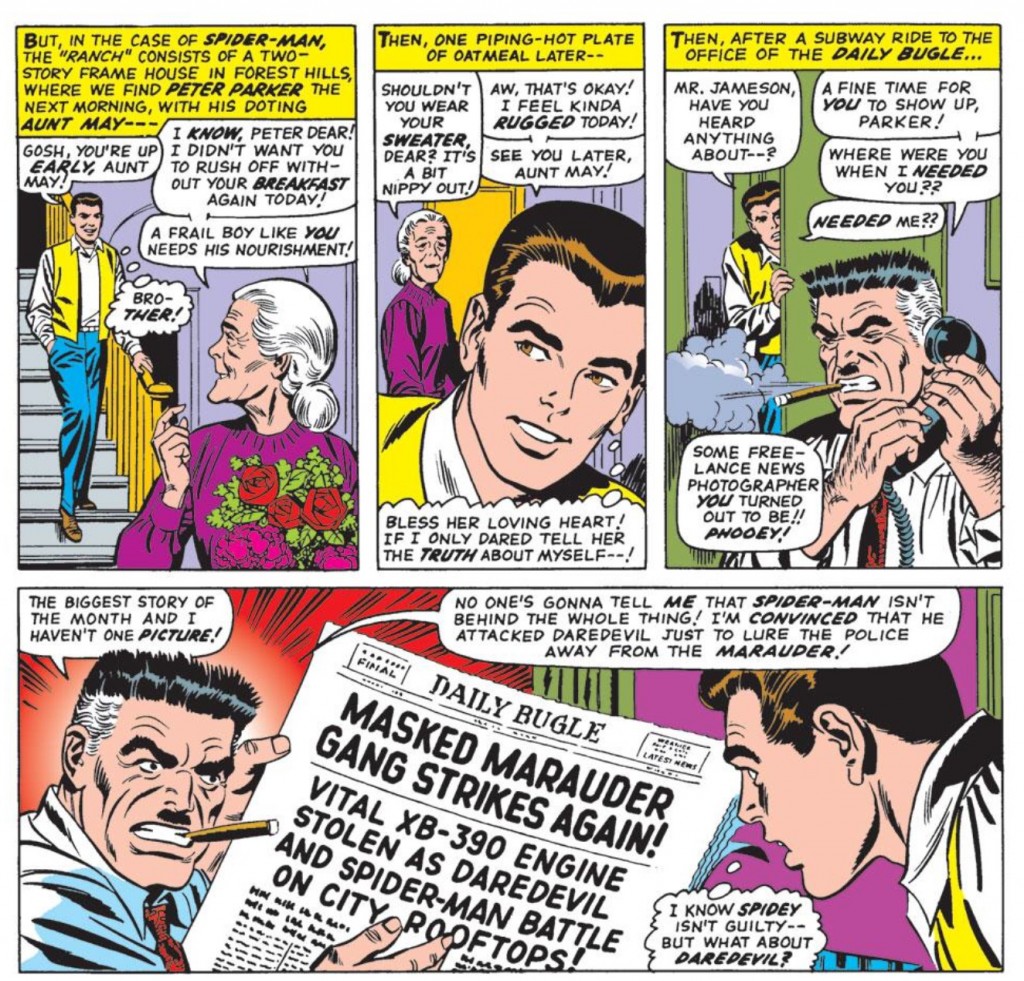 I’m sure some of you Daredevil aficionados will note that Romita even got to work his artistic magic on Matt Murdock’s supporting cast. Originally illustrated by Bill Everett, Romita’s Murdock is more chiseled and handsome (for whatever reason, JRSR believed he had more freedom in how he drew Daredevil’s cast) and Daredevil’s love interest, Karen Page, is a blonde beauty (while still retaining a “girl next door” type demureness). JRSR’s ability to draw attractive, realistic-looking women would end up being the bread and butter of his work on ASM when Peter was playing Archie while Mary Jane and Gwen Stacy were fighting over him like Betty and Veronica, so it’s not to see that here with Karen (with both Matt and Foggy fighting for her affections to boot).

Not for nothing, Romita even manages to make the storyline’s big bad, the laughably D-list Masked Marauder, look slightly intimidating. At least the Maraduer’s optic blasts look pretty sinister. 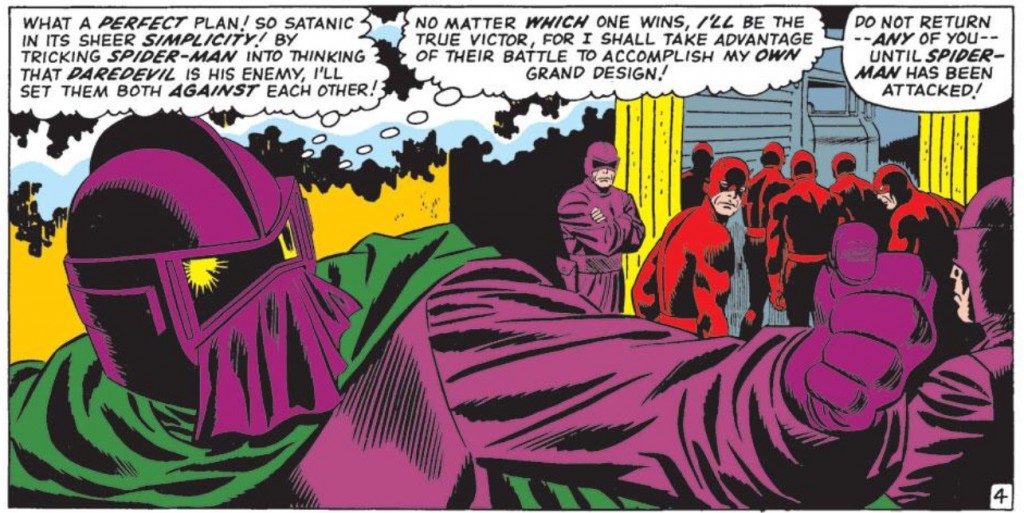 Marauder, oddly enough, played a featured role in this Freaky Friday-esque artistic switch 13 years later when Miller was asked to provide guest pencils for two issues of Spectacular during the Bill Mantlo run. In this story, Spider-Man is blinded by … the Masked Marauder. With the help of Daredevil, Spidey gets his mojo (and sight) back just in time to walk into his apartment that’s been wrecked by the cryptic Carrion villain (setting up what ended up being one of Mantlo’s best stories on Spectacular). 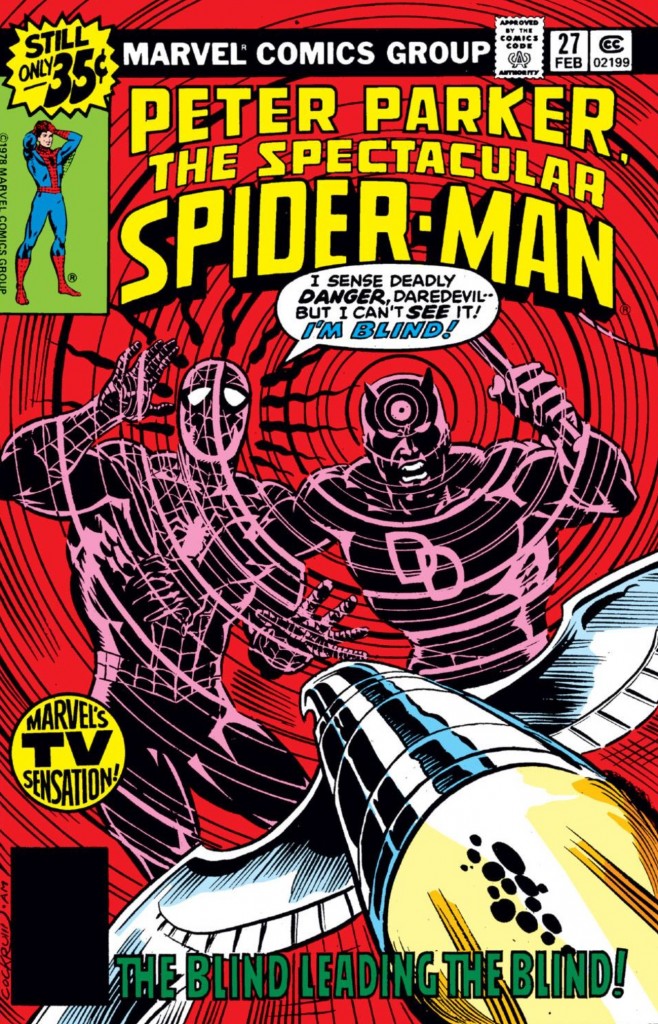 Miller’s noir-inspired style is immediately on display in both these issues, and it’s patently clear that Miller has an affection for Daredevil unlike any other creator that came before or after. The opening splash page of Spectacular #27 shows Daredevil in the background, almost in shadow, echoing the grim and gritty aesthetic Miller brought to Daredevil when he started penciling that series a few months later. 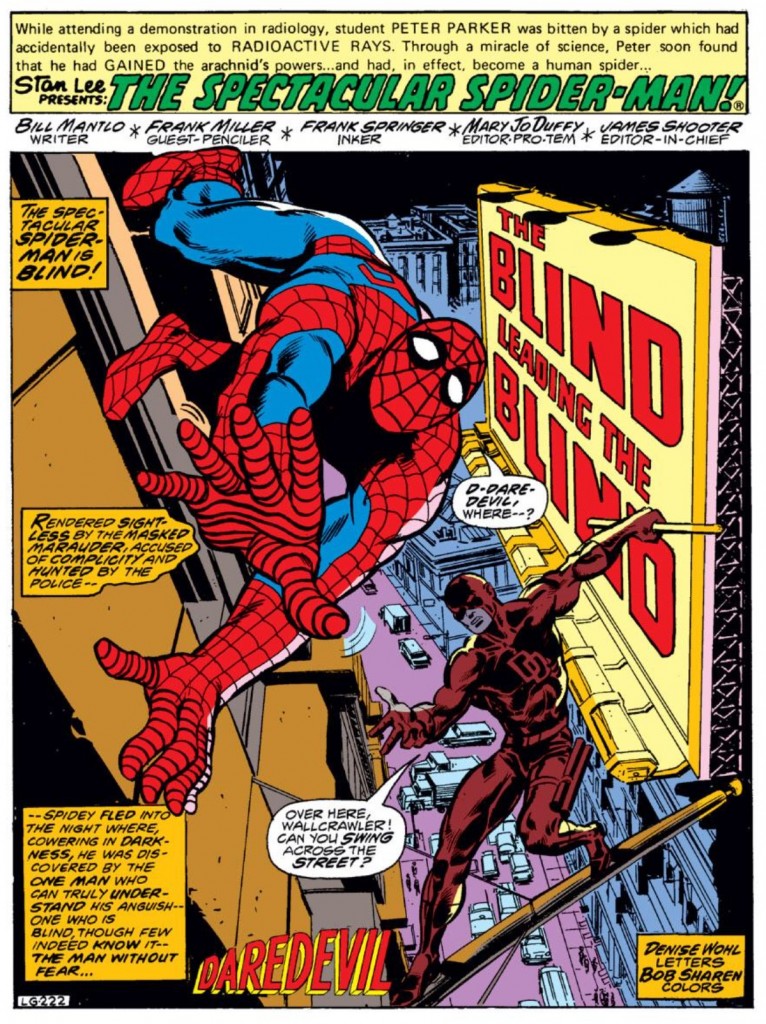 In addition to the darkness, Miller manages to work in a few of his eventual trademark Daredevil-isms in this Spidey story, such as his visual interpretation of ‘Ol Hornhead’s radar sense, and a particular favorite of mine, Miller’s penchant for capturing motion by illustrating several poses of the character at various points of ascent or descent that together, almost create a “flip book” effect.

As it worked out, Miller starting penciling Daredevil two months after the Spider-Man storyline. Miller was so dedicated to Daredevil, he eventually was tasked to pull double duty (scripts and pencils) for the title during his run that completely reinvented the character and his supporting cast, saving the title from certain cancellation.  Some of Miller’s more famous storyline changes included bringing Spider-Man villain Wilson Fisk, aka, Kingpin, into Matt Murdock’s world, as well as more prominent roles for characters like Daily Bugle reporter Ben Urich and Daredevil’s ninja mentor Stick. And who can forget Miller’s best creation,  one of Marvel’s greatest femme fatale in Elektra. 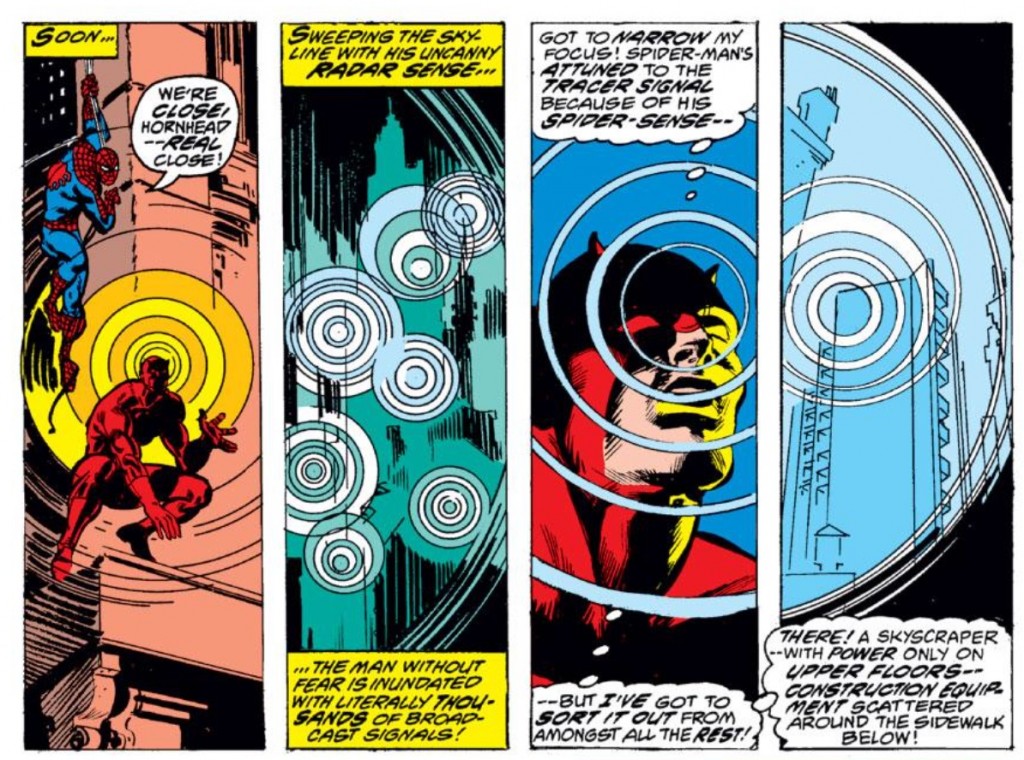 If you consider yourself even the slightest bit of a comic book historian with a specific focus on Spidey and Daredevil, you have to get your hands on these four comic books (or just read them in digital format like I did on the Marvel Unlimited app). They are four of the most randomly influential issues in Marvel history. Not too shabby for something headlined by a couple of “guest” artists.