The “Hobgoblin Lives” mini-series certainly goes a long way in setting things “right” about the identity of the Hobgoblin in that writer Roger Stern was finally given an opportunity to explain the story he was building before leaving Amazing Spider-Man at issue #250. But despite the fact that Stern finally had an opportunity to tell HIS story with the character he helped to create with John Romita Jr. in 1983, I’ve often questioned whether or not revealing Roderick Kingsley as the man under the mask was really all that much better of a choice than the Ned Leeds letdown in ASM #289.

After going back and reading Kingsley’s earliest appearances in Spectacular Spider-Man #43 and #48, I can’t say that anyone would have been all that enthusiastic if this odd duck of a character was revealed to be one of Spider-Man’s greatest villains in the 1980s. Sure, maybe things would have played out differently if Stern had stuck with ASM and had an opportunity to develop things his way rather than retcon a resolution 10 years later, but still … Roderick Kingsley? Really? 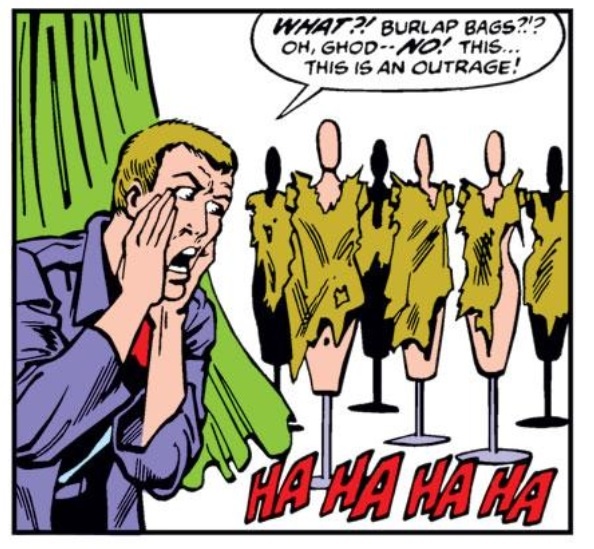 When Kingsley is first introduced by Stern in Spectacular #43 (well before the Hobgoblin was ever a twinkle in anybody’s eye) he comes across as a 1980s stereotype/caricature of a male fashion mogul – i.e. scrawny, cowardly and effeminate. I won’t go as far as to say offensive – the early 80s were a vastly different time and place from today and I have a lot of respect for Stern as a writer to think he was intentionally trying to be hurtful to a community of people with Kingsley – but I have to believe a character like this would probably be a lot more controversial if he was introduced in 2013’s America. 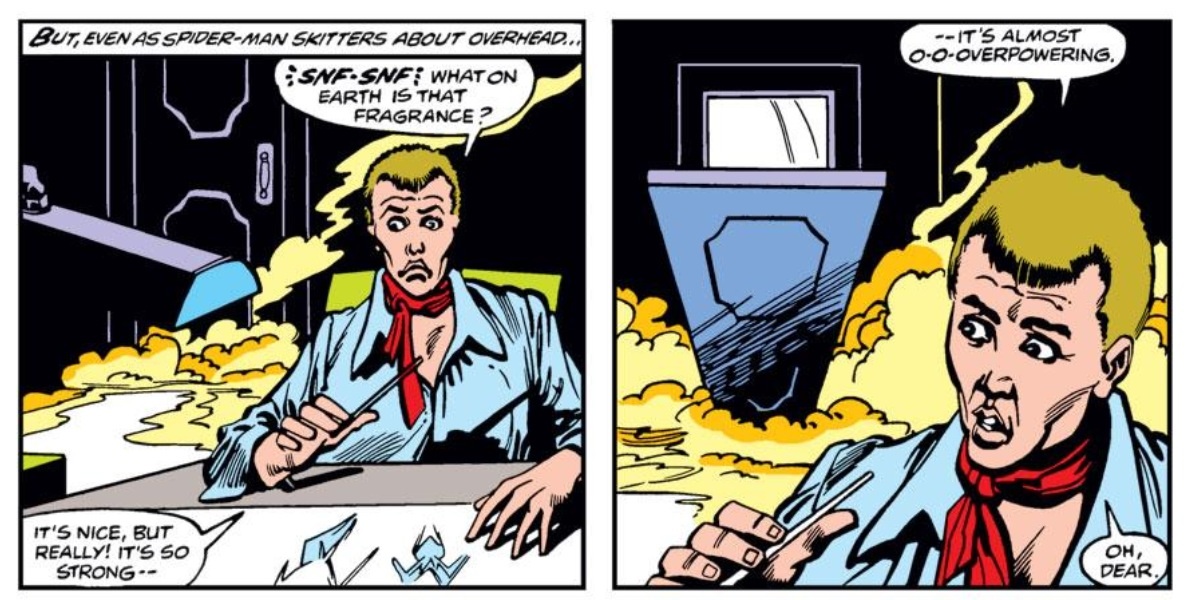 In this issue, Kingsley is at odds with the Belladonna, a female fashion mogul who claims Roderick stole fashion ideas from her. Kingsley is frequently found in different panels with his hands on his hips, harping on someone (or Spider-Man) about something. He’s not intimidating, not do I get any vibe from him that he’s capable of being as devious and sociopathic as the Hobgoblin, despite the fact that a bunch of people keep saying his a “bad” guy. 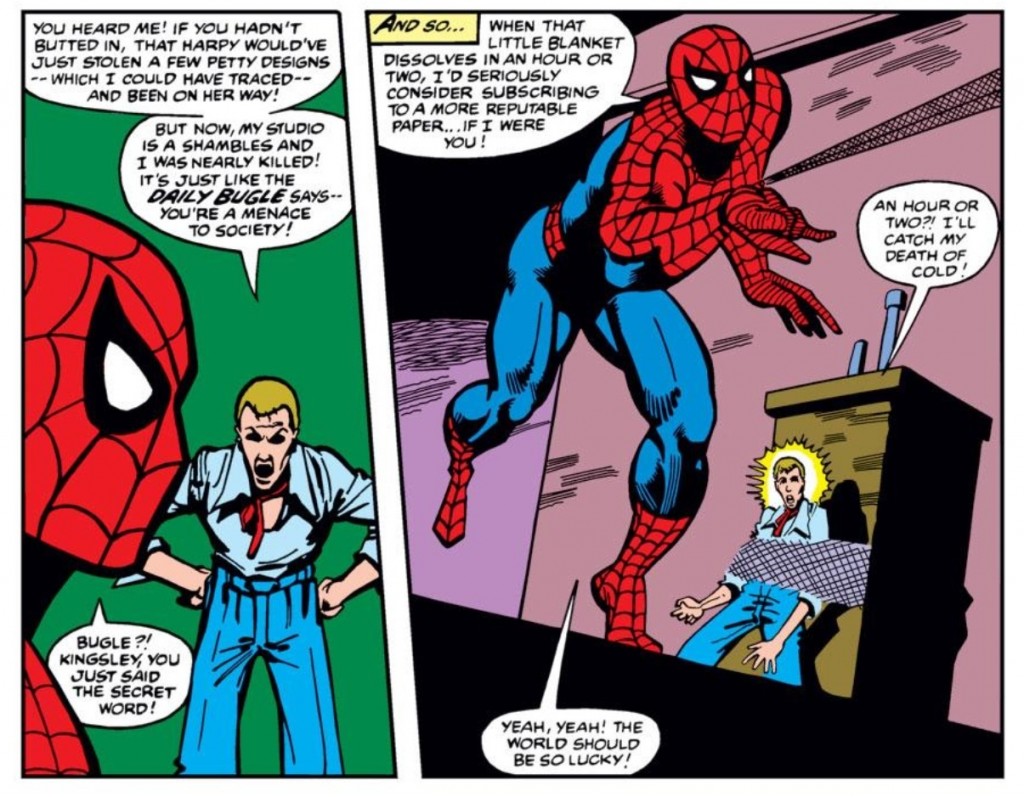 Roderick is portrayed as being a little more masculine for his second appearance in Spectacular #48, but only in that he’s now willing to get his hands dirty with a gun if need be. We learn a little more from Belladonna about what a creep Kingsley is and how his entire fashion/fragrance empire is essentially built on the backs of those he stepped on and/or abused. But he’s also still incredibly skittish and un-supervillain-like. In one panel, he looks anxious and sweaty with a gun in his hand, and then when “Spider-Man” does show up (it’s actually a dummy), Kingsley shoots first and asks questions later, and ends up looking like more like a reactionary fool than a methodical madman capable of taking on Spider-Man in a fight while blackmailing some of New York’s most powerful individuals. And yet many people claim that this guy made more sense to be the Hobgoblin than Ned Leeds. 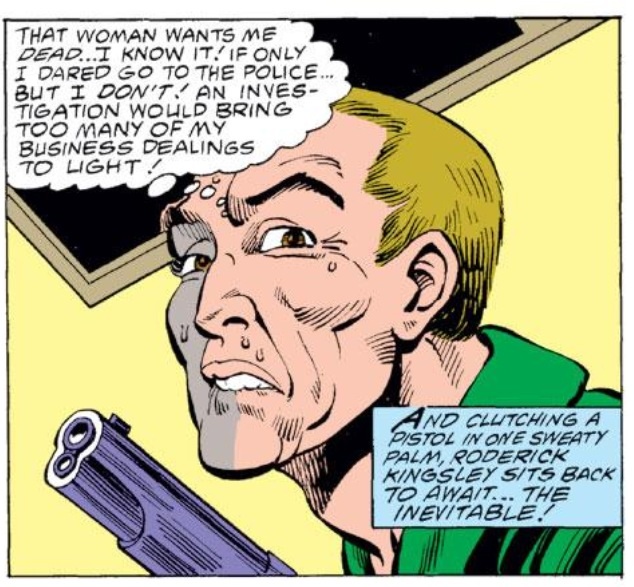 When speaking last week with Tom DeFalco, who was the group editor of the Spider-Man titles in the early 80s and writer of ASM starting with issue #251, he said that Stern had told him he wanted to reveal Kingsley as the Hobgoblin. When DeFalco said that was impossible because of the “famous” scene in ASM #249 when the Hobgoblin busts through the country club to attack the businessmen he’s blackmailing (and Kingsley is seen screaming that the Hobgbolin could be “any one of us”), Stern explained to the incoming ASM writer that Roderick had a brother Daniel who was posing as him in public, allowing Roderick to sneak off as the Hobgoblin. DeFalco, a big fan of mystery novels, said it would be unfair for Stern to introduce a character like this after the fact – the first rule of a mystery is you need to be upfront with your audience about all of your suspects. While Stern had just started to lay the groundwork for a Kingsley brother in ASM #250, it was just one issue where this fact is mentioned and it was when Stern already had one foot out the door on ASM. While I guess DeFalco could have picked up the story where Stern dropped off, it wasn’t like Kingsley was this ultra-compelling character that warranted an extended backstory. This is the same guy who shot at a Spider-Man dummy in Spectacular #48. 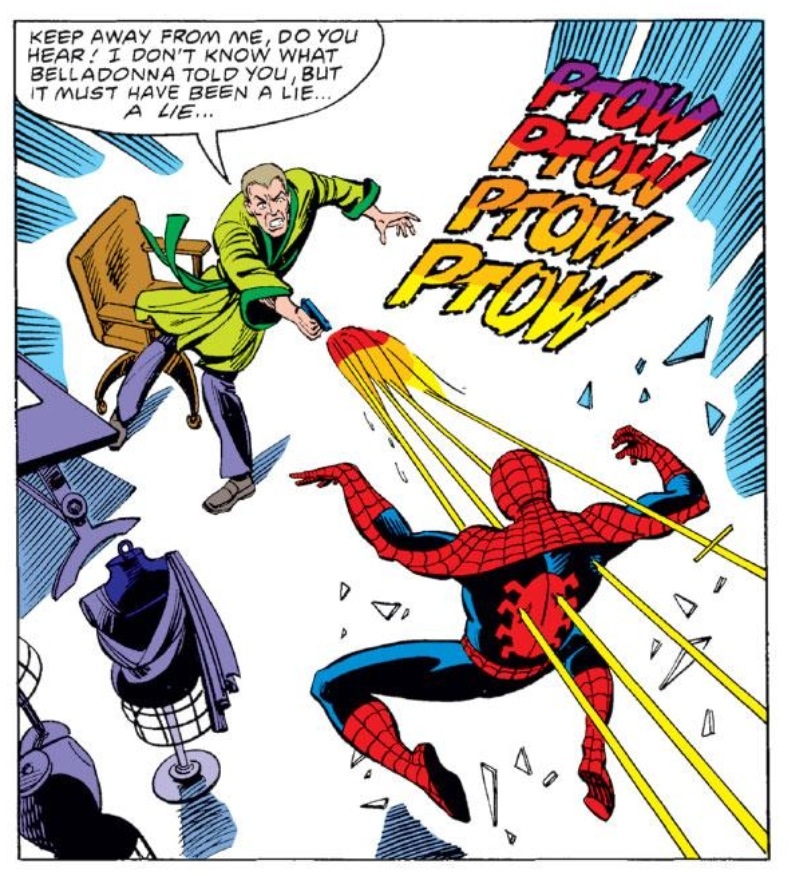 DeFalco’s idea of making Kingsley the Rose, a crime boss that a) didn’t get his hands dirty, b) wore a purple mask and was well dressed, and c) had an affinity towards roses, a flower known for its fragrance, makes total sense. This reveal would have paid off some of Stern’s groundwork in setting up Kingsley as a shady character. Plus, since the Rose wasn’t exactly the phenom that Hobgoblin was, I don’t think anybody would have felt too let down with that reveal.

Of course it still doesn’t address the issue of who SHOULD have been the Hobgoblin? We can continue to dissect this issue for years to come and still not reach a consensus – I don’t think we ever will. In its current incarnation, there were complaints about Phil Urich being the Hobgoblin, especially when everyone thought he killed the “true” Hobgoblin in Roderick Kingsley to become him (whoops, he only killed the “evil” twin!). And now that Phil has left the Hobgoblin behind in order to become the “Goblin Knight,” I’m sure there will be some hand-wringing about the next character to wear the orange hood.

Writing about the Hobgoblin all summer has been a lot of fun, as reliving each of these comics one-by-one has gotten my brain working overdrive about this character. I promise for the indefinite future I will cease talking about the Hobgoblin mystery as part of my regular posts here on Chasing Amazing, but I also hope to continue digging about this topic independently. Where that ultimately will lead me, nobody knows.