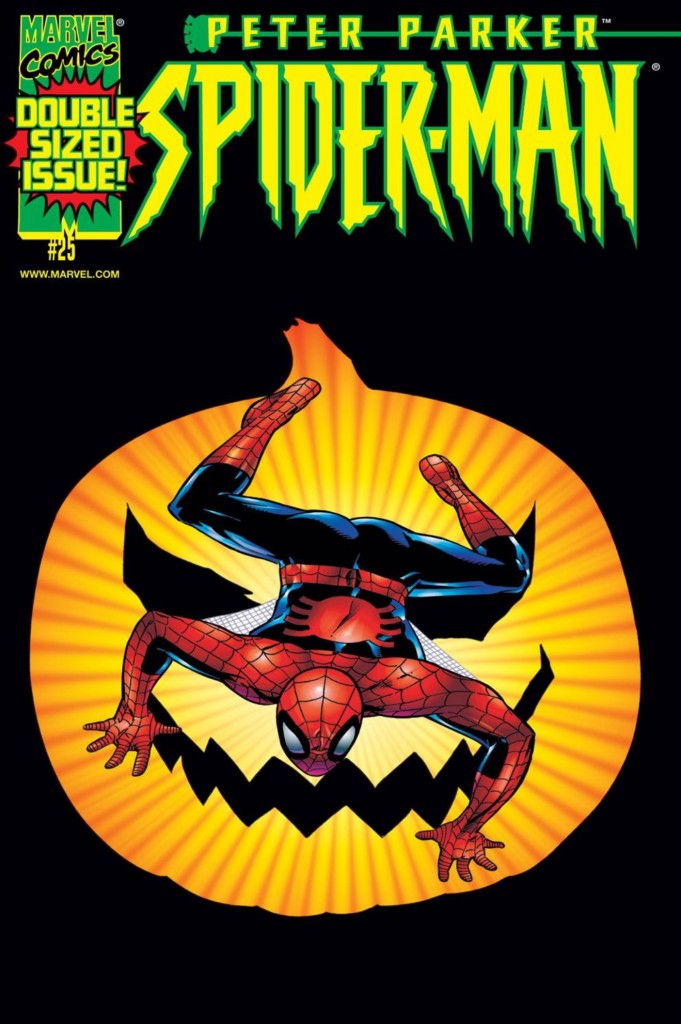 I feel exhausted after writing all of those writer/artist credits, but despite it being a story that sprawled across three different series all with different creative teams, 2000-2001’s “Revenge of the Green Goblin,” makes my list at No. 8, in large part because of its synchronicity and how it demonstrates yet another new wrinkle in the Peter Parker/Norman Osborn character dynamic.

Throughout this storyline, the three different creative teams examine the dark and twisted symbiotic relationship between Peter and Norman. After spending years of his life (including a period of time when he wasn’t even supposed to be alive) trying to kill Peter/Spider-Man, Norman, noting that Peter’s wife is presumed dead in a plane crash, hatches a scheme to turn “Parker” to the “dark side” and join him as his one true heir (since Harry is/was such a colossal failure). 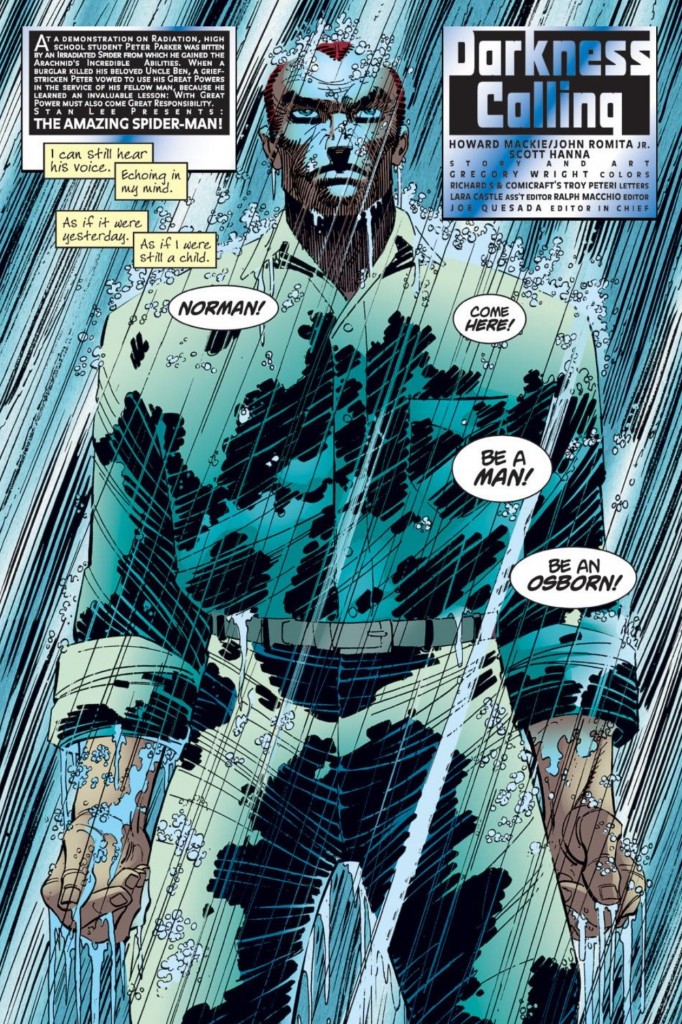 Stern, Mackie and Jenkins key in on one of my favorite kinds of hero/villain character studies: the unexpected parallels between the hero and villain and how those paths inevitably diverge thanks to one specific decision or event. In terms of Spidey’s rogue’s gallery, I’ve long believed that he and Doctor Octopus had more in common than any other villain  (as Dan Slott is expertly showing on Superior Spider-Man), but “Revenge of the Green Goblin” aligns Peter and Norman in ways that hadn’t been explored prior to this storyline.

In a number of scenes, Norman is shown as being broken by his abusive relationship with his aloof father. At one point when he was much younger, Norman was forced by his father to “embrace the darkness,” causing Osborn to devolve into the power-hungry businessman-turned-supervillain he would eventually emblemize as the Green Goblin. This cycle would obviously go on to repeat itself in how Norman treated Harry, and how he aspires to treat his grandson Normie. But along the way, Osborne has a revelation about Peter that causes him to rethink his adversarial relationship with him. Following his presumed “death” and exile to Europe, Norman comes back to New York to “protect” Harry during Normie’s birth. However, Norman finds that Spider-Man is already there, keeping watch over the Osborn family. That’s when Norman realizes that Peter was everything he ever wanted in a son – physically powerful, fiercely loyal and capable of taking care of everyone in ways that Harry never could. 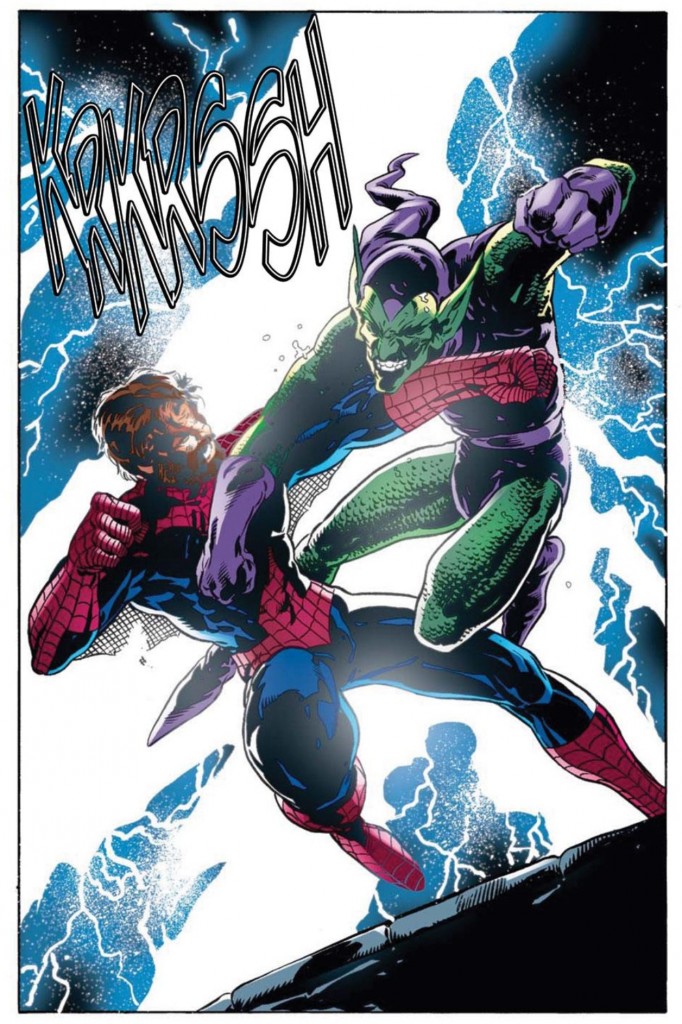 The only hitch in Norman’s master plan is that Peter hasn’t “embraced the darkness.” In order to push Peter in that direction, the creative team introduces “Chekov’s tube of poisoned toothpaste,” delivered to Peter by Norman in disguise. The toothpaste causes Peter to hallucinate and have crazy dreams and visions, including one of Uncle Ben morphing into Norman and the Green Goblin. 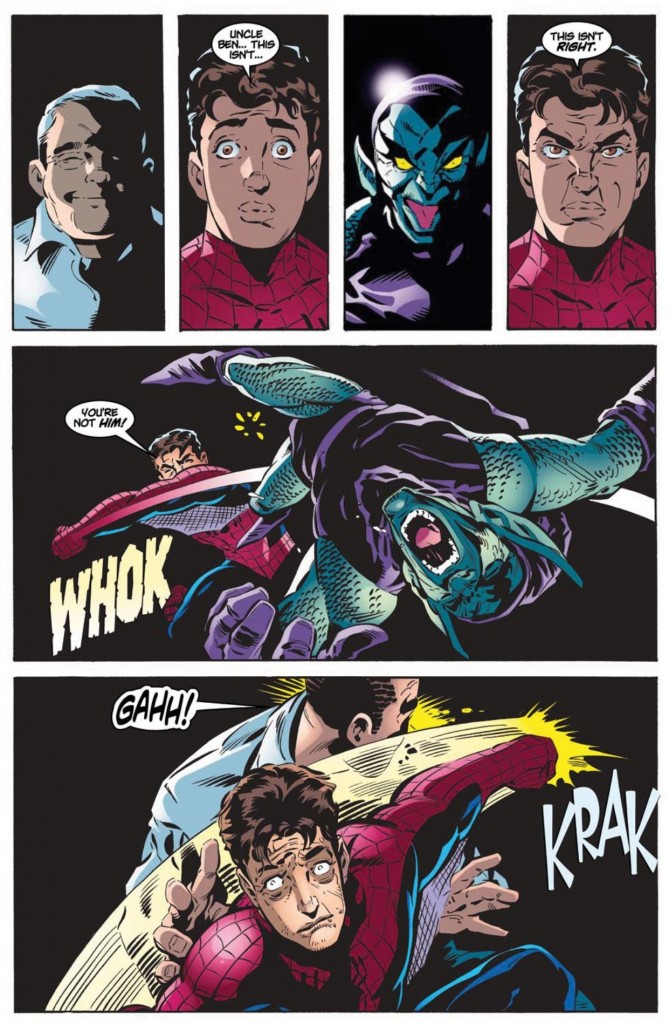 It’s a terrifying image that also raises an interesting question about Peter’s unconscious thought process: is there a part of Peter that thinks of Norman as a father figure? On the surface, it’s a totally outlandish thought, but “Revenge of the Green Goblin” gives the idea some weight. Peter was orphaned as a young boy and his Uncle, who filled the void of his father for years, is killed due to Peter’s arrogance and negligence. Ben’s death is obviously a defining moment as it leads to the birth of Spider-Man and his mantra, “with great power must also come responsibility,” but in the years that follow, Norman’s actions, probably more than any other character, have defined Peter and Spider-Man. Granted, Norman’s actions are all heinous and abusive, but that’s consistent with the relationship he has with his own father. If you don’t buy into the idea of Peter and Norman as father and son, “Revenge of the Green Goblin,” should at least make you realize that a “father figure” is not always a positive influence.

ASM #25’s plot focuses on the Green Goblin terrorizing everyone close to Peter: the Daily Bugle newsroom, his roommate, Randy Robertson and the Stacy family. But Mackie’s script reveals there’s something “off” about the way the Goblin is operating. Robbie tells Spidey he looks unsteady and unsure of himself on the glider. After another dose of toothpaste, Peter passes out and awakens to find himself in the hands of Norman. Norman tells Peter that he himself was the one riding around as the Goblin, while Osborn watched from the sidelines. 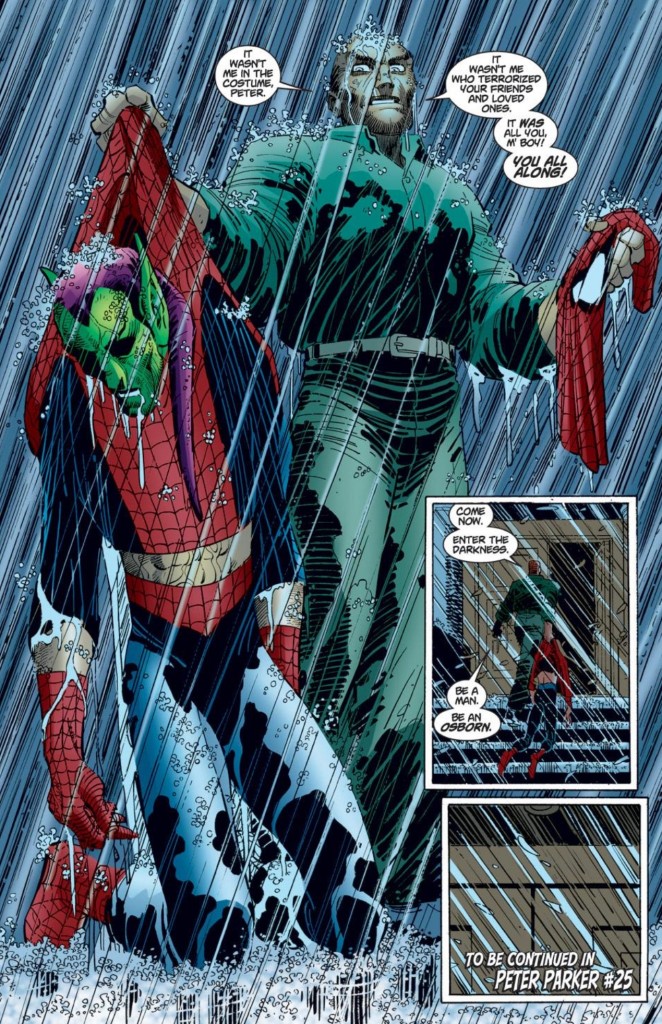 To this day, this major reveal confuses me and I wonder if its just Mackie’s script lacking clarity and needing more exposition to explain what exactly happened. The few clues Mackie does provide, like Robbie’s account of the Goblin attack followed with JJJ’s freak-out that Spider-Man is there to “finish the job,” aren’t enough to sell me on this idea that it really was Spider-Man posing as the Green Goblin. It’s the only part of this entire storyline that really bothers me, and even after subsequent re-reads, I still choose to not think of this reveal as the literal truth, but rather just more mind games from Norman. 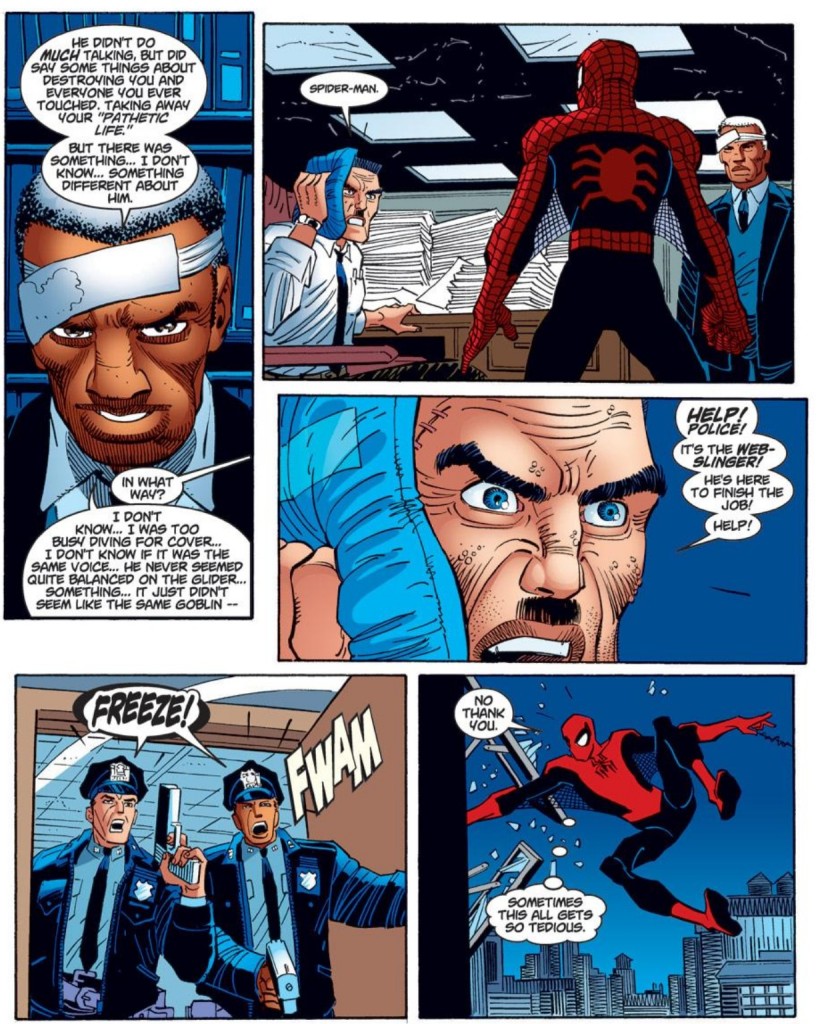 Fortunately, Jenkins works around Mackie’s muddied ending in ASM #25 for his issue of Peter Parker: Spider-Man, leading to one of the most intensely plotted single-issues of Spider-Man I can think of. Jenkins focuses exclusively on Osborn’s physical and psychological torture of Peter. Throughout the issue, Norman sets up a number of “challenges” for Peter that involve him choosing between darkness and light. Each time Peter chooses the light, he’s subjected to electrical shocks, or some other form of physical abuse, causing him to cry out “why are you doing this to me?” 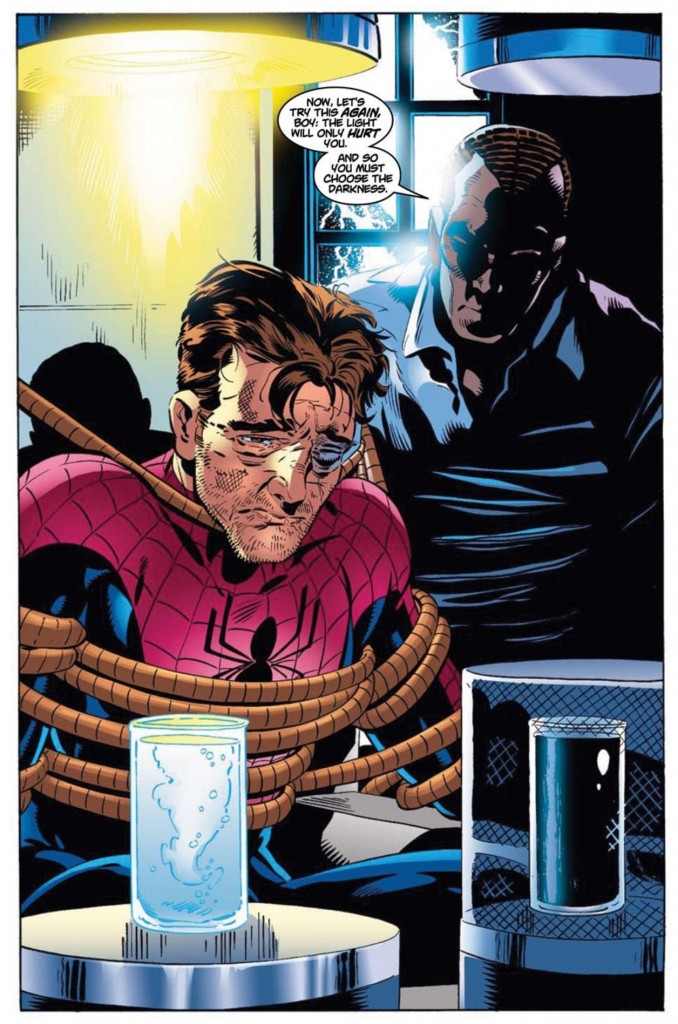 The intensity culminates with a scene that shows Norman opening the door to the room where Peter is being held captive. As the light flows into the room, Peter shirks it and cries for the door to be closed so he can stay in the darkness. Despite being battered and beaten leading up to this moment, this scene marks the first chink in Peter’s armor, giving Norman the opening that he’s been waiting for since he first started planning his revenge in the Stern/Frenz mini. 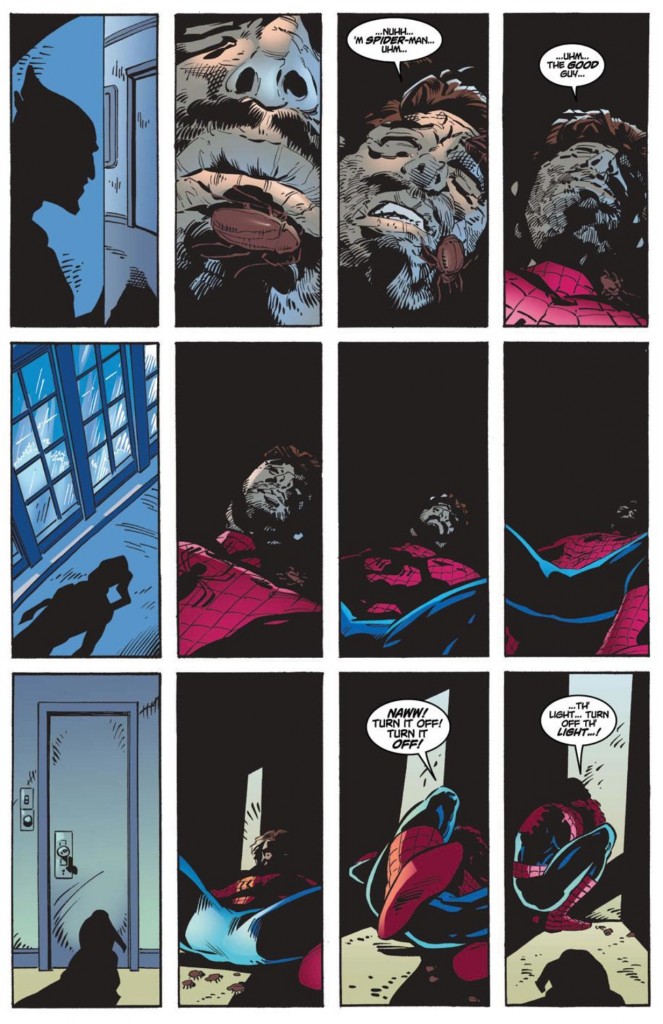 Norman puts the famed Goblin Serum in front of Peter and demands that he drink it. Peter is on the verge of giving in when he envisions Aunt May telling him what a “good boy” he’s always been. It’s in that moment that Peter rejects darkness again, throwing the serum in Norman’s face. 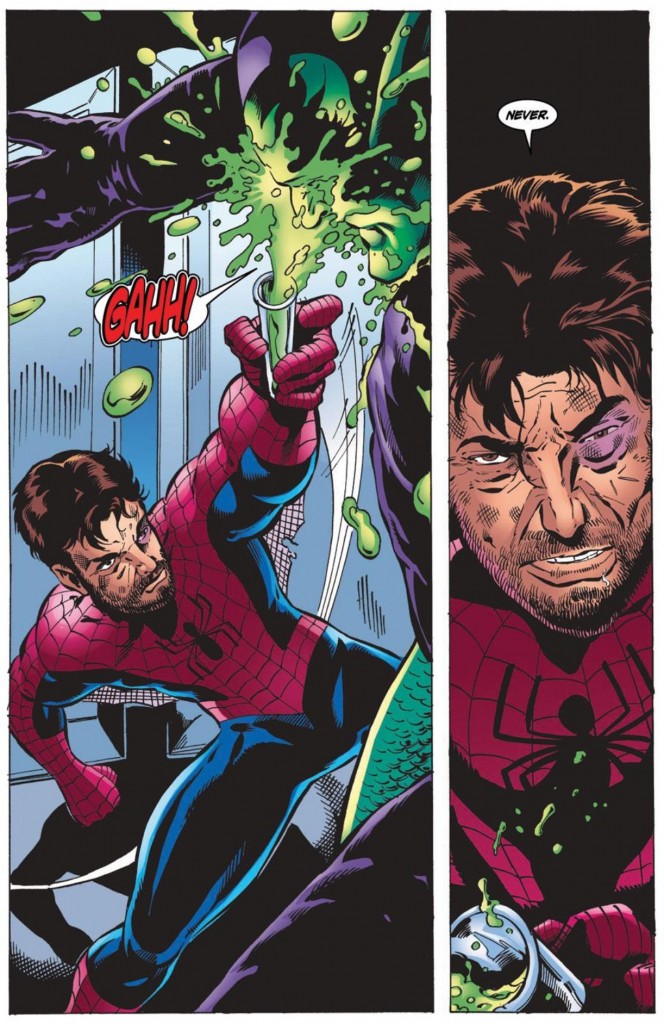 And therein lies the core difference between Peter and Norman. Whereas Norman is incapable of finding any kind of love – familial or romantic – that could help heal his emotional wounds caused by his father’s abuse, Peter, even after moments of self-doubt, manages to choose light because of his fulfilling mother/child relationship with Aunt May. This idea of Peter overcoming all the odds because he has love was also famously explored in “Kraven’s Last Hunt,” when his marriage to Mary Jane gave him the strength to tear himself out of the grave. Using his relationship with May as the foundation for his revival in “Revenge of the Green Goblin” is equally effective and rings true in light of MJ’s presumed “death,” since Peter has no one else left to fuel his heroism. 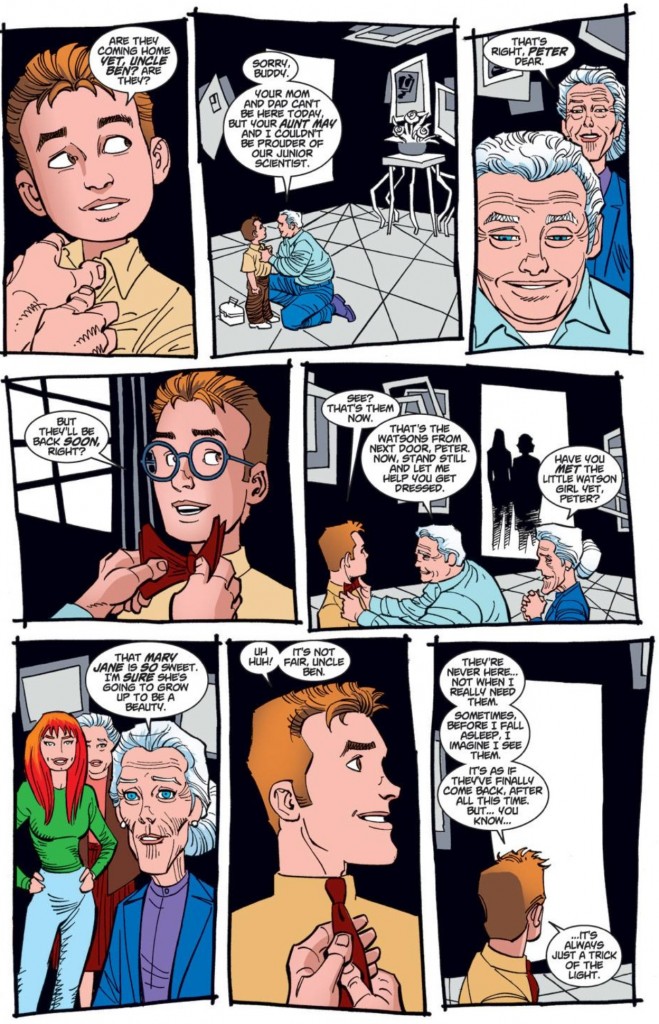 And still, even with this brief moment of triumph, Jenkins manages to end this storyline on a down note. Peter physically “wins” his battle with Norman, but Norman points out that Peter is showing signs of breaking down psychologically. This development allows Norman to leave the scene claiming to be triumphant. It also plants the seed for a more “final” confrontation down the road, which will end with either Peter or Norman killing the other.

“Revenge of the Green Goblin” is special because it is one of those storylines that dares to ask “why” these characters continue fight each other. Norman has inflicted Peter with almost every kind of pain conceivable, from killing his girlfriend and his clone “brother,” to kidnapping his Aunt, to making him a wanted man and villain in the eyes of the general public. And yet, Norman keeps finding new ways to tether his life to Peter’s he’s strictly a sadist who wants to brutalize him, but because deep down he respects his opponent – so much so that he sees him as a more fitting heir than his own flesh and blood. Meanwhile, all three creative teams inflict enough doubt on Peter throughout this storyline that it leads us to believe that maybe deep down, he has a modicum of respect for his opponent as well. “Revenge of the Green Goblin” sends us down a very dark rabbit hole, but after decades of storylines that feature these two characters beating the crap out of each other, this rabbit hole is a pretty interesting place to hang out for a few issues.