Without further ado, let’s get to the list’s “honorable mention,” aka, #11: 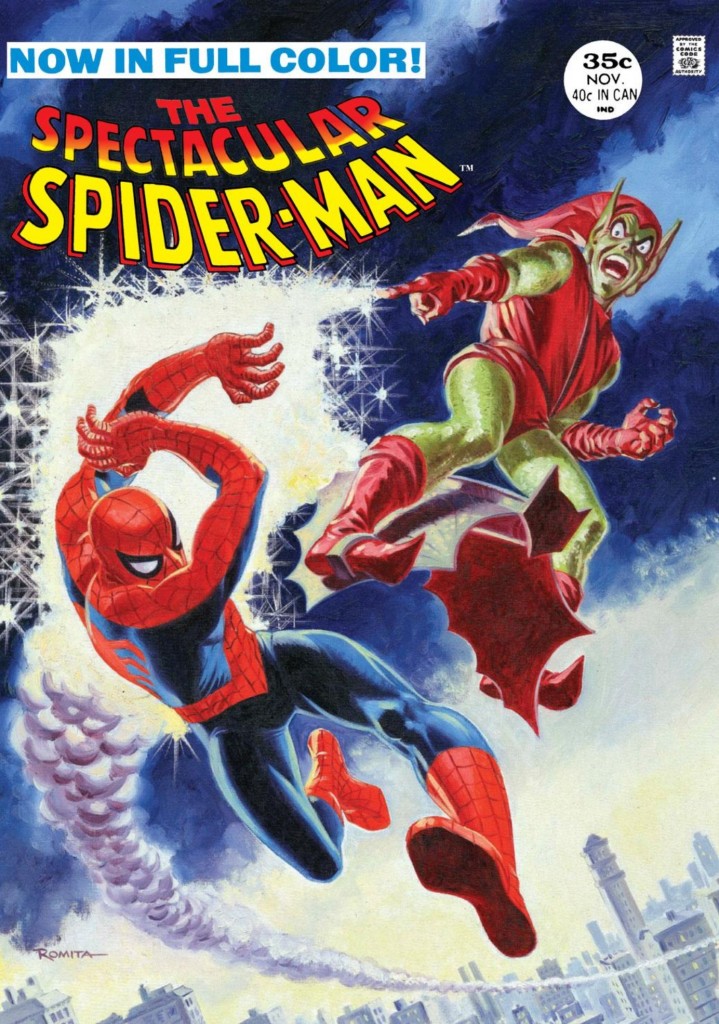 It wasn’t my original intent to start a “Top 10 Green Goblin Stories” list on Chasing Amazing with an officially designated “honorable mention,” but to paraphrase from a very famous fictitious British rock band, my list “goes to 11.”

In all seriousness, initially, 1968’s Spectacular Spider-Man Magazine #2 had JUST missed the cut-off for my list. I went back and forth several times between this story and what will eventually be revealed as my No. 10 story, before (obviously) deciding on the latter. As such, I had resigned myself to not even mention this story as it figured into my countdown, but over the past few weeks, I’ve received a number of comments via e-mail, Twitter and Chasing Amazing’s comments section about whether or not Spectacular Magazine #2 would be included. It made me realize that this story is more popular than I thought, so rather than ignore its existence, I conjured up a way to have my cake and eat it to by giving the comic its own dedicated post, but not a numerical spot on my list. Pretty sneaky, huh? 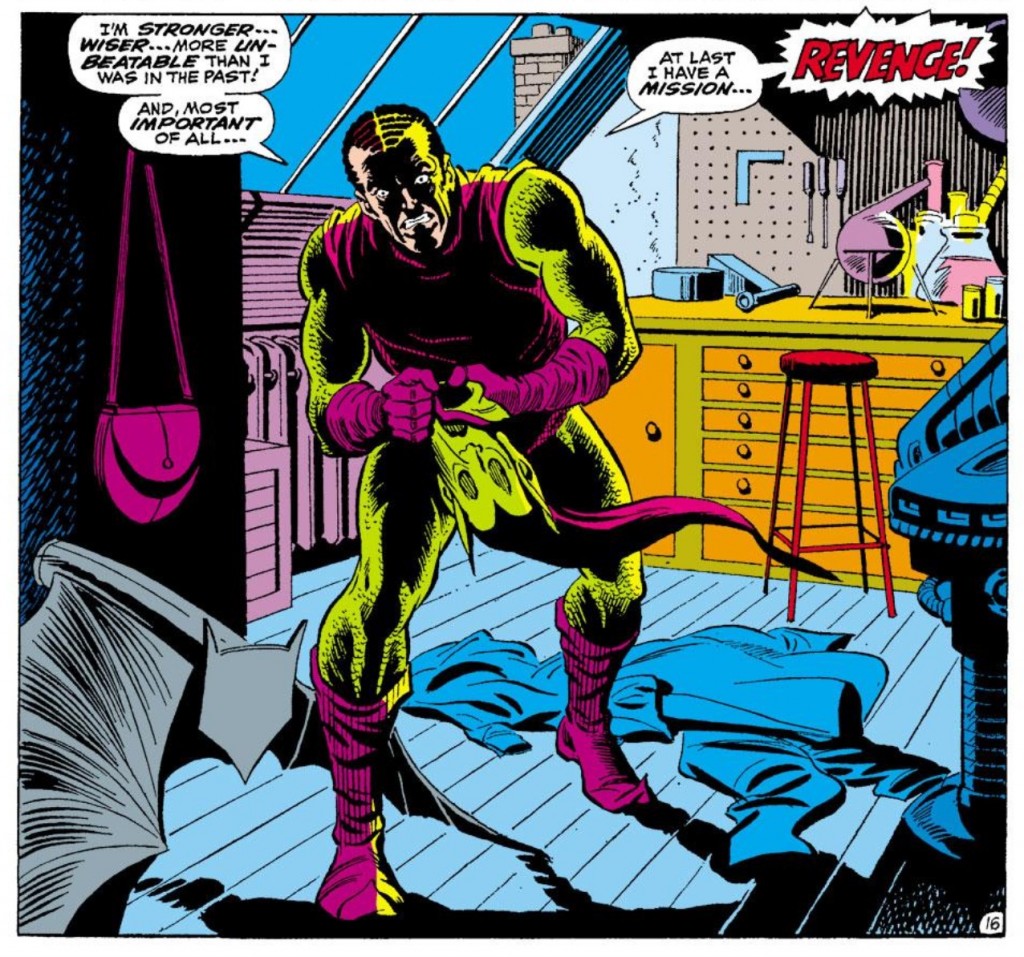 But since I’m as petty as I am sneaky, it would be uncharacteristic for me to talk about this story without defensively dissecting why it didn’t make my top 10 list. It’s not that I dislike Spectacular Magazine #2 – remember, I just said it would be ranked No. 11 if my list went that high – but whereas I think the following 10 entries all bring something new to the table in the Spider-Man/Green Goblin dynamic, Spectacular Magazine #2 feels like a very well made hour-long television special that loses points for the fact that the first 20 minutes is all clips and flashbacks.

For those who haven’t read this comic, Spectacular Magazine #2 marks the first time Green Goblin and Spider-Man squared off after an unmasked Spidey famously defeated the Goblin (who had also been unmasked as Norman Osborn, the father of Peter’s friend Harry) in Amazing Spider-Man #40. Spectacular Magazine was also Marvel’s first attempt to create a secondary Spider-Man title. After publishing the first comic in black and white, Spectacular Magazine #2 was in full-color and for a whopping 35 cents, customers received an enormous amount of content (more than a standard Annual issue). At the end of this issue, a #3 was advertised, but the story never saw the light of day. 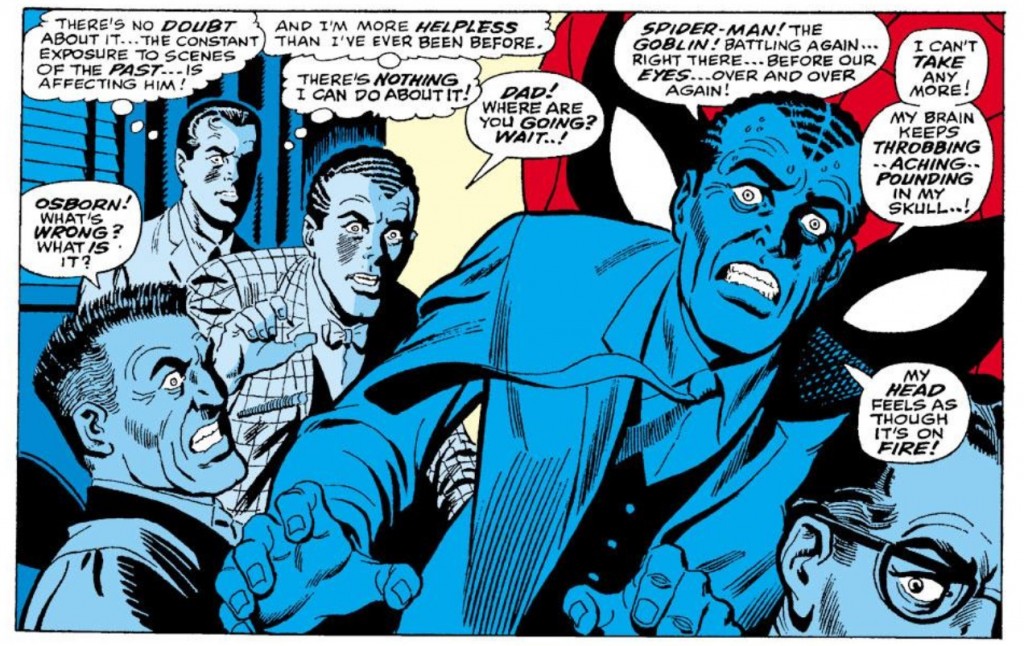 The magazine pays off a low and slow cooking story that had been appearing in ASM. Norman, who had developed amnesia after his last battle with Spider-Man/Peter, had started to become nervous and paranoid again. Peter, who was socially doing a lot better for himself in the Lee/John Romita Jr.-era thanks to the addition of Mary Jane Watson and his romantic relationship with Gwen Stacy, was concerned that Norman’s erratic behavior was a sign that he would eventually return to his Green Goblin persona.

Naturally, Peter had a reason to be concerned. During a police briefing organized by Gwen’s father, Captain George Stacy, Norman sees photos from his last fight with Spider-Man and it’s only a matter of time before he’s back on his Goblin Glider, terrorizing Peter. 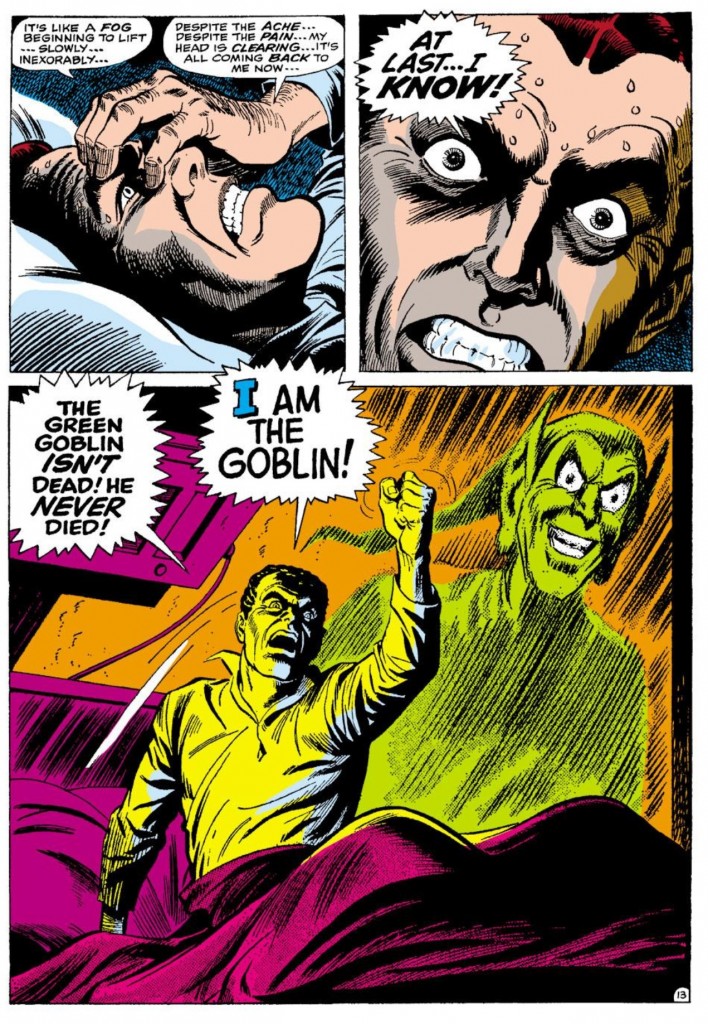 The magazine features plenty of drama centered on the fact that Norman is still the only Spidey villain to know his secret identity. While that was technically true the last time they fought, the Spider-verse now had the additions of Gwen and MJ, while Harry was a more fully-formed character. At one point during an incredibly intense dinner-party sequence, which includes Peter, Norman, Harry, Gwen and MJ, Peter wonders if Osborn would actually show his hand in front of his son and a couple of college girls. In a creepily ominous passage, Peter reminds himself that Norman is such a sociopath when his Green Goblin alter-ego is in control, that having all of these innocent people around him wouldn’t deter him from acting on his bloodlust for Spider-Man. Of course, this would prove to be especially prescient  when Norman kills Gwen in years later in ASM #121; her only crime being that she (unknowingly) dated Spider-Man. 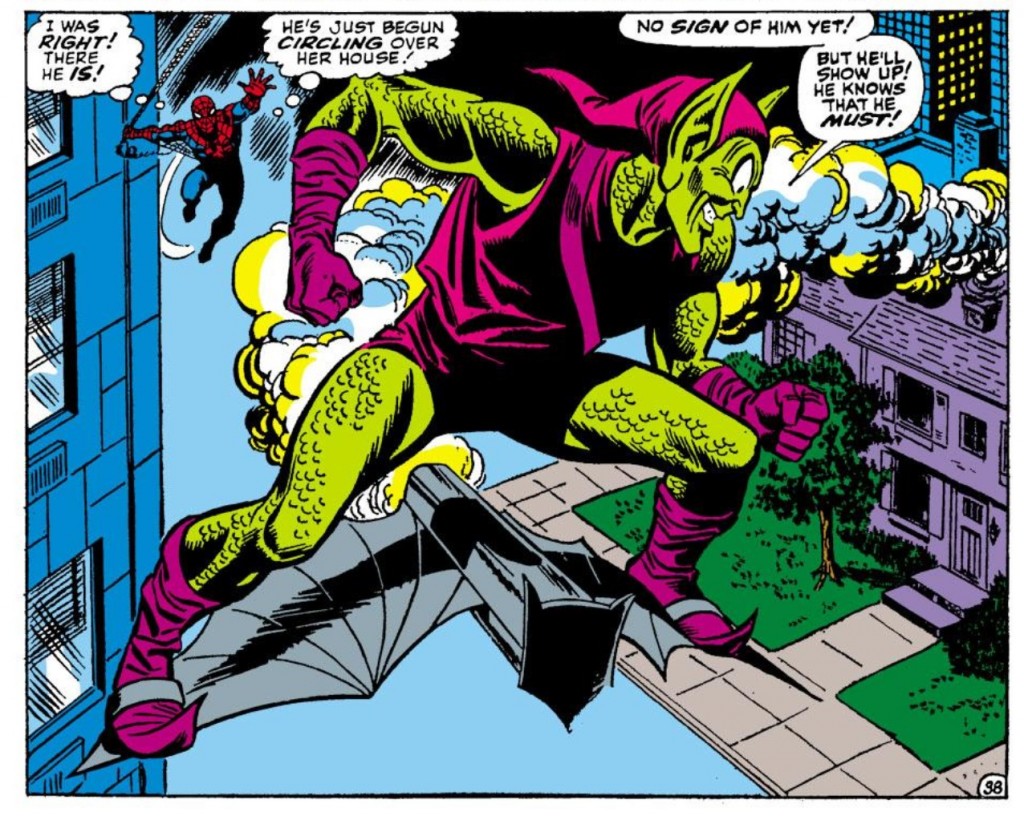 Romita is on top of his game throughout this issue. True to form, his women never looked better (though MJ’s Little Orphan Annie hairdo feels like a fashion faux pas to me today). Gwen looks like a total knock-out when Peter picks her up for dinner (though Stan and “Jazzy” John had this penchant for having Peter and Gwen ogle each other in front of Captain Stacy, which always makes me feel a tad uncomfortable for Peter … seriously, he looks like he’s mentally undressing Gwen in front of her police captain father?). 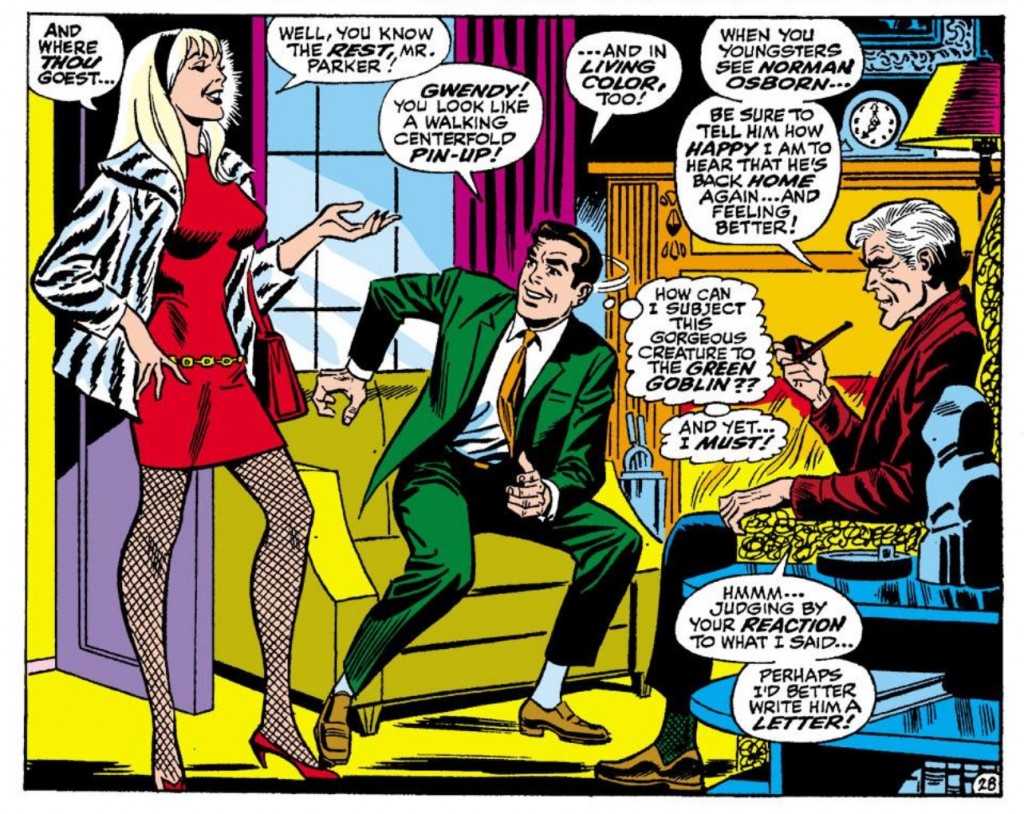 My favorite Spider-Man artist of all time then gets to cut-loose in a comic book scene straight out of the psychedelic 60s when the Goblin hits Peter with a hallucinogenic “smoke bomb.” As visually dated as these images might come across 45 years later, Spidey’s (not) acid trip (because it was a Goblin bomb you see …) provide us with a stunning (and trippy) sequence. Romita gets to illustrate a bunch of oddly shaped hands and faces that threaten Spider-Man to the brink of a near mental-breakdown. The scene demonstrates that the beauty of Romita’s art went beyond pretty faces and puppy dog love. He could even pull off an illustration that’s straight out of a Strawberry Alarm Clock album cover. 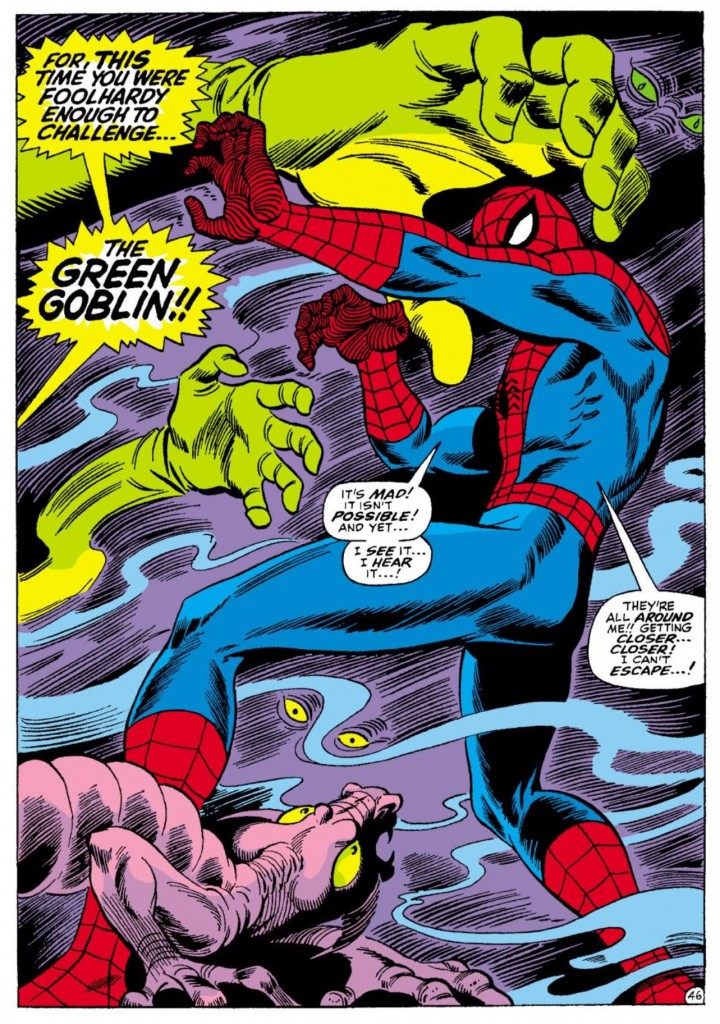 So, some top-notch Romita artwork; a wonderfully tense scene with Peter, Norman, Harry, MJ and Gwen over dinner; and a fun battle between Spider-Man and his arch-nemesis Green Goblin. Why isn’t this storyline ranked in my top 10, you might ask?

Again, it comes down to the fact that as jumbo-sized as this magazine might be, it also features of a ton of recapped content. As the famous Stan Lee adage goes, “every comic is someone’s first comic,” so I totally understand the logic and reasoning of why Spectacular Magazine #2 is constructed this way. Given the fact that it’s formatted like a magazine rather than a standard comic book, I’m guessing Marvel was banking on a number of casual readers picking it up off the newsstand. But for long-time readers and hardcore fans, all of the flashbacks occasionally drags an otherwise fast-paced story to a crawl.

It’s important to serve those first-time readers, but if it comes at the expense of the enjoyment of long-time readers, then I just can’t possible place Spectacular Magazine #2 in my top 10 list. Additionally, I also question the long-term ramifications of this story. When we get to the very end, the status quo has been restored – Norman has amnesia, Harry, Gwen and MJ are all pretty much unchanged after their awkward dinner at the Osborn house, and Peter’s secret identity is safe . If someone had never read this story, there are no indications within the larger ongoing ASM story that they even missed anything important in Spectacular Magazine #2. 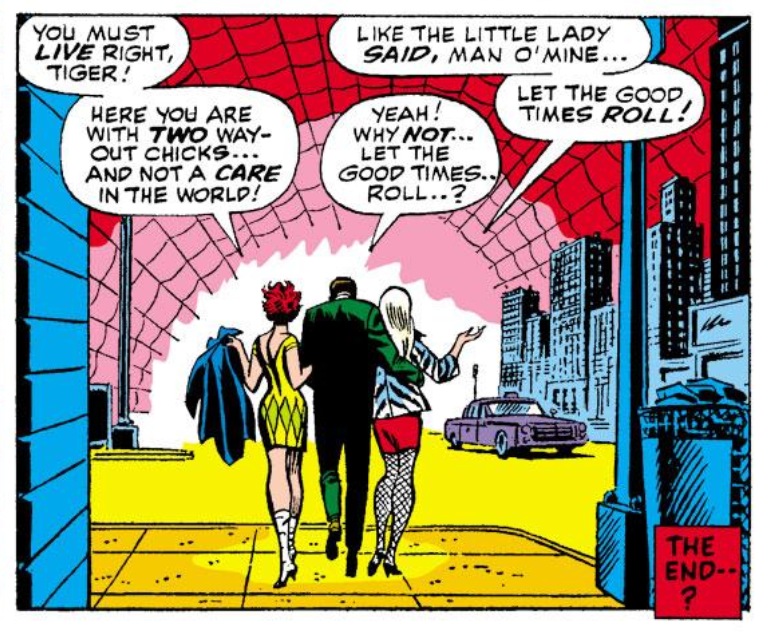 And let me be clear, all of these factors don’t make Spectacular Magazine #2 a bad story, or even a mediocre one. But competition was very fierce for this list, and I hope that some of you see my logic for the storylines that did end up making the cut for my list once I get those posts up and running over the next two months (and if you do disagree, I hope the debate in the comments section is spirited and civil).

Tune in to Chasing Amazing on Wednesday to find out the No. 10 entry on my “Top 10 Green Goblin Storylines” list!