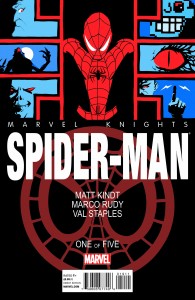 When Marvel announced a few months ago that my “mom and dad’s Spider-Man,” aka, Peter Parker, would be returning as the Web Slinging focal point of a five part mini-series that would also resurrect the Marvel Knights imprint from the early 2000s, I was intrigued by the project without even really caring if the comic itself was going to be any good. Not that I’m some mindless Spidey fan that’s going to drop $20 on a mini-series even if I hate it, but the announcement was such a surprise – Peter Parker AND Marvel Knights making a comeback in the midst of the “Superior” era? Who’d a thunk it? –  that I never really took the time to consider if I’d actually enjoy the mini.

I certainly didn’t know much about the comic’s creative team. Writer Matt Kindt has done some work for the “big two,” but seems to have made more of a name for himself writing the Dark Horse published Mind MGMT (which actually sounds like a pretty cool concept for a comic book and something I might want to pick up as a collected edition). The mini’s artist, Marco Rudy, doesn’t even have a Wikipedia page, which means he might as well not even exist on this plane of existence (my tongue is so firmly in my cheek here).

And the plot of the story was promoted as something along the lines of Spider-Man taking on 99 deadly foes, which certainly sounds like an imposing number of villains, but as the old saying goes, I’ll always take quality over quantity. So if you add all these elements together – the return of Peter/Marvel Knights being promoted as another Marvel event; a creative team I was totally unfamiliar with; and a plot description that sounded like Sam Raimi’s Spider-Man 3 on steroids, I wasn’t so much managing my expectations as much as I didn’t have ANY expectations to manage.

Of course, the moral of all this rambling is that I really enjoyed this comic book. I hesitate to call it a “great Spider-Man story,” because after years of reading the Silver Age sensibilities of Dan Slott in Amazing and Superior (a style that has been echoed by Chris Yost in Avenging/Superior Team-Up), Kindt’s script is like a bucket of cold water on my head on a hot summer’s day – shocking but ultimately refreshing. This is not me saying I prefer one style/characterization over the other, but Kindt’s Marvel Knights Spider-Man is one of the more unique takes on the character I have ever read. Sure, there are some familiar beats scattered throughout the text – some Parker luck moments in the beginning, a handful of quips by Peter and his overwhelming sense of guilt and responsibility for his Uncle Ben’s death – but I can’t for the life of me think of a Spider-Man narrative that was this unsettling before. 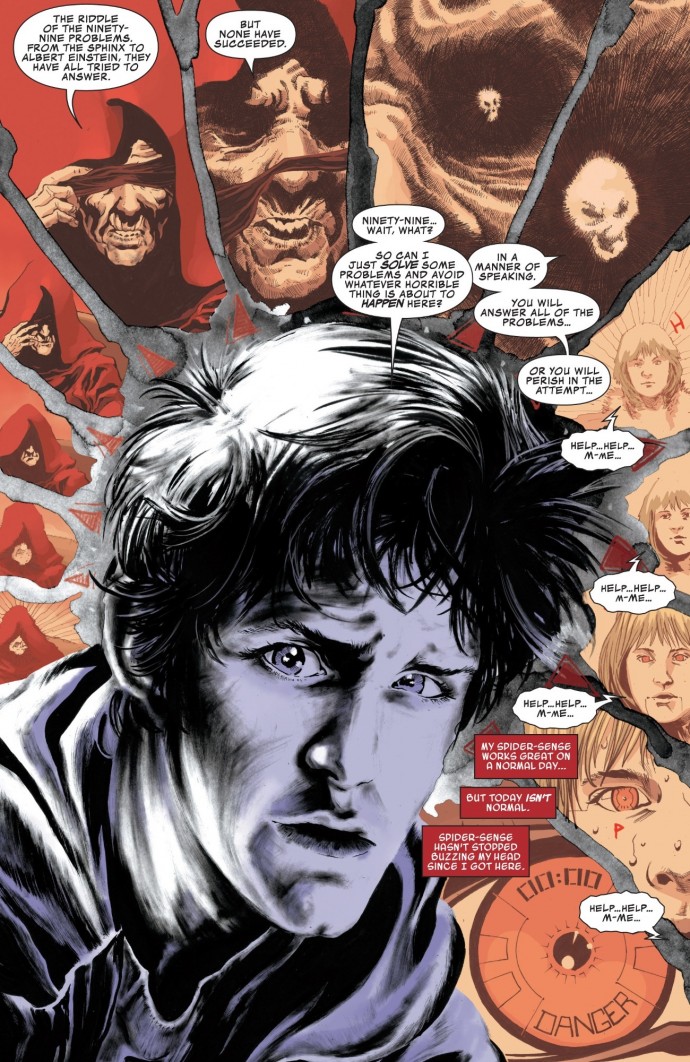 A lot of that has to do with Rudy’s artwork, which creates a sense of disorientation that mirrors Peter’s drug-induced spiral in the comic. And Rudy doesn’t just come up with a bunch of clichéd “psychedelic” drug images here. The way he visualizes Peter’s state-of-mind is much more intelligent than that. Page layouts are varied and offer up an extraordinary amount of detail. He frames panels in creative ways, like incorporating text representing Peter’s inner monologue to split up one double-page spread. 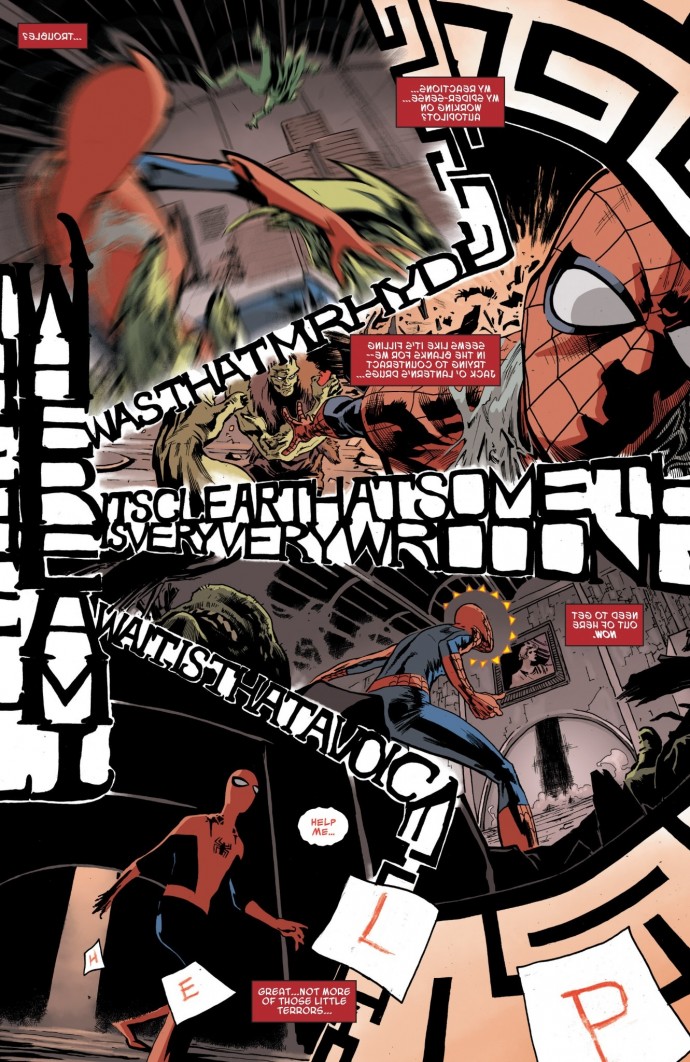 Rudy also mixes full-color illustrations with film-style “negative” illustrations of classic monsters like Frankenstein and Morbius’ vampire. The stylistic choices for these specific characters gives those sequences a “vintage” feel. 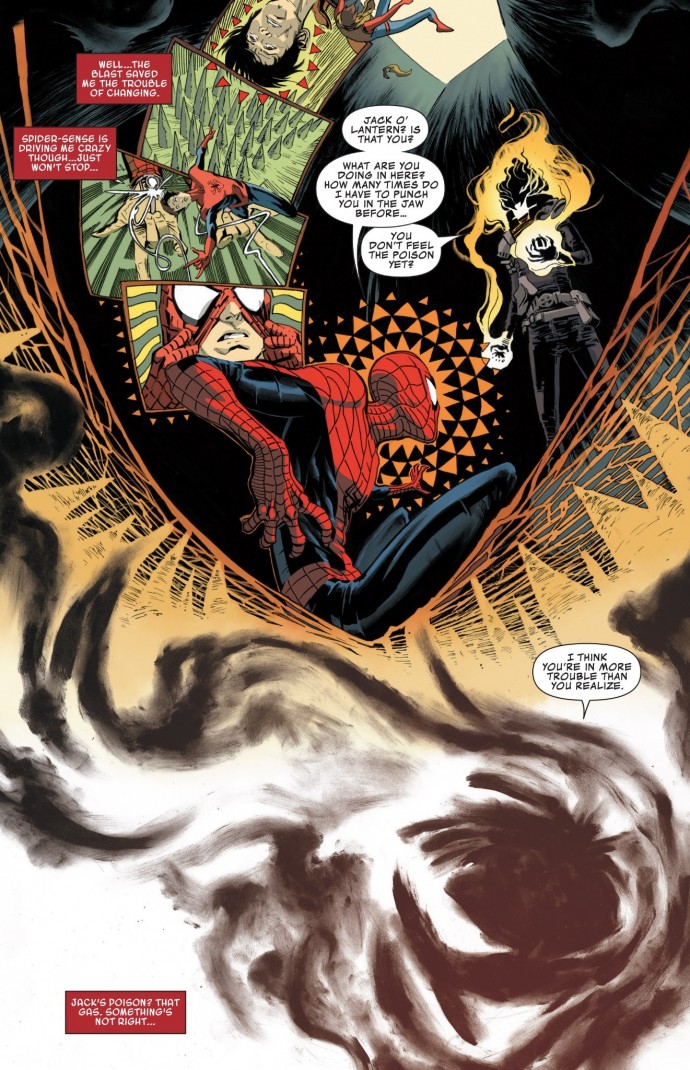 But where the art team really hits a home run is the sheer variety of artistic styles this comic book contains. There’s realism mixed with an Alice of Wonderland distortion. There are images that resemble the stick figures from restroom signage. For the coup de grace, when the classic villain Arcade is introduced, Rudy actually incorporate 8/16-bit video game imagery on the page. Sure, there’s a busy-ness to these pages – especially when you compare it to the more simplistic styling of a Spidey artist like Marcos Martin – but because of Kindt’s script, the art just works here. Rather than be put off by the level of detail, I found myself looking at certain spreads and then checking them out again to see if I missed anything. I think most comic book fans are resigned to drop $4 on new titles these days, but in the case of Marvel Knights Spider-Man, I can honestly say the reading experience was immersive enough that I got my money’s worth. 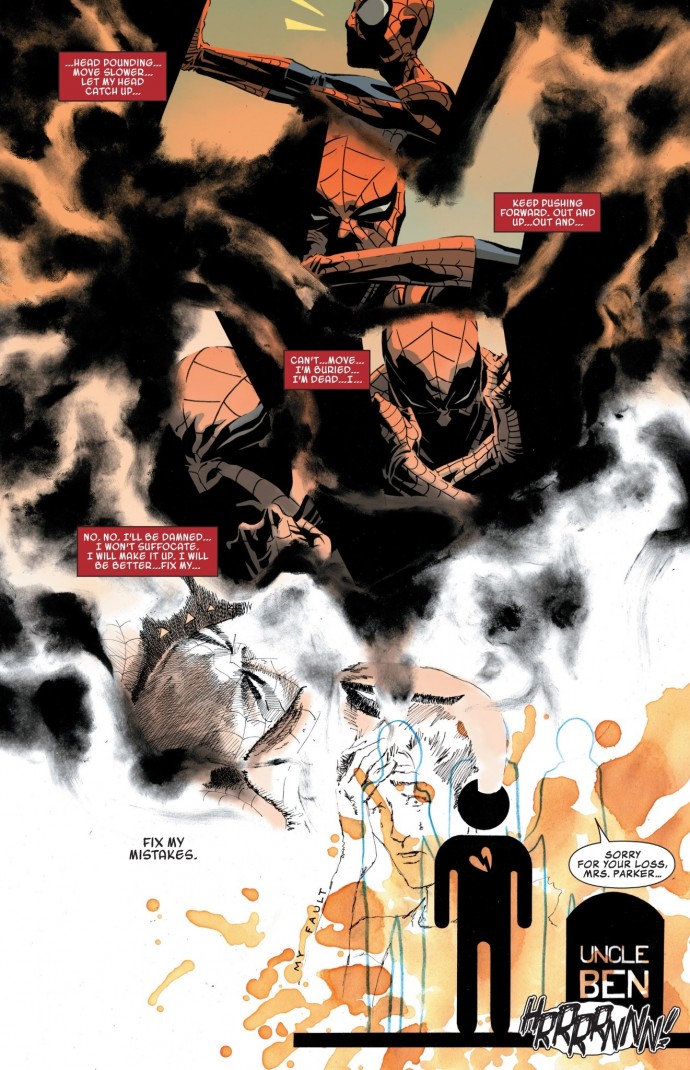 What Kindt and Rudy managed to do here is (in my opinion) more closely capture the spirit of what the Marvel Knight’s line is supposed to be about. From what I understand, Marvel Knights is a place for new and up-and-coming creators to put their own unique spins on classic properties. While Mark Milar’s run on Marvel Knights Spider-Man in the early 2000s was wildly successful and revered by many fans, I would hardly call the story itself groundbreaking from a stylistic standpoint. It was a  “darker’ story than the token Spidey stuff we got around that time, but it was also a fairly straightforward Spider-Man vs. the world type of narrative. It was Spider-Man vs. Norman Osborn and then Spider-Man vs. Vulture and Spider-Man vs. Venom before returning back to Norman and his Sinister 12. In Kindt and Rudy’s story, the reader is told that Spider-Man is up against 99 villains, but based on their disorientating style, I’m not 100 percent sure I believe that’s what’s really going on here. 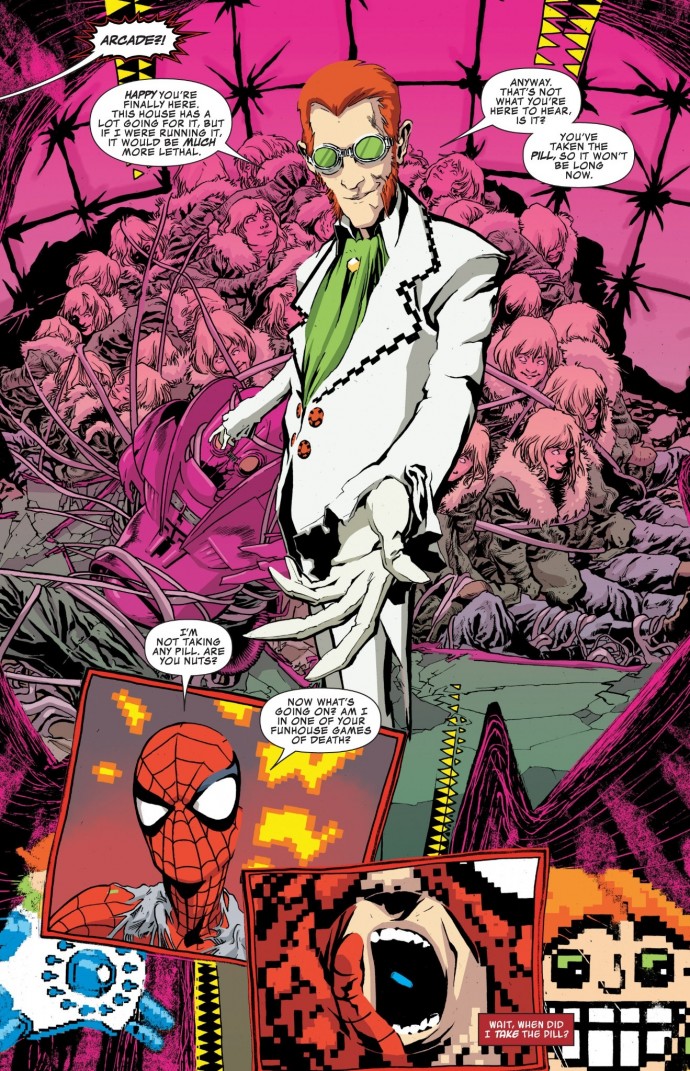 And on a final note, a comic like this made me realize exactly how much I missed Peter. Even in the instances where I’ve been hard on Superior Spider-Man, I still have mostly enjoyed the series and applaud Slott and Marvel for trying something so dramatically different with one of their core characters. But Marvel Knights demonstrates that if you can still be daring and different with those “tired” characters the company was supposedly moving away from when it launched the Superior status quo a little less than a year ago. My biggest fear about Superior since the day it was announced was that if the characters remained unlikeable I would eventually lose interest. I can’t even say with any certainty if Kindt has a strong grasp on who Peter is – it’s way too early and this first comic was way too hallucinogenic to make any declarations. But I can definitely say the character I was reading about wasn’t Spider Ock. And while I anxiously await what comes next in Superior Spider-Man, I think the bulk of my anticipation is tied into the hope that this concept is nearing its expiration date.