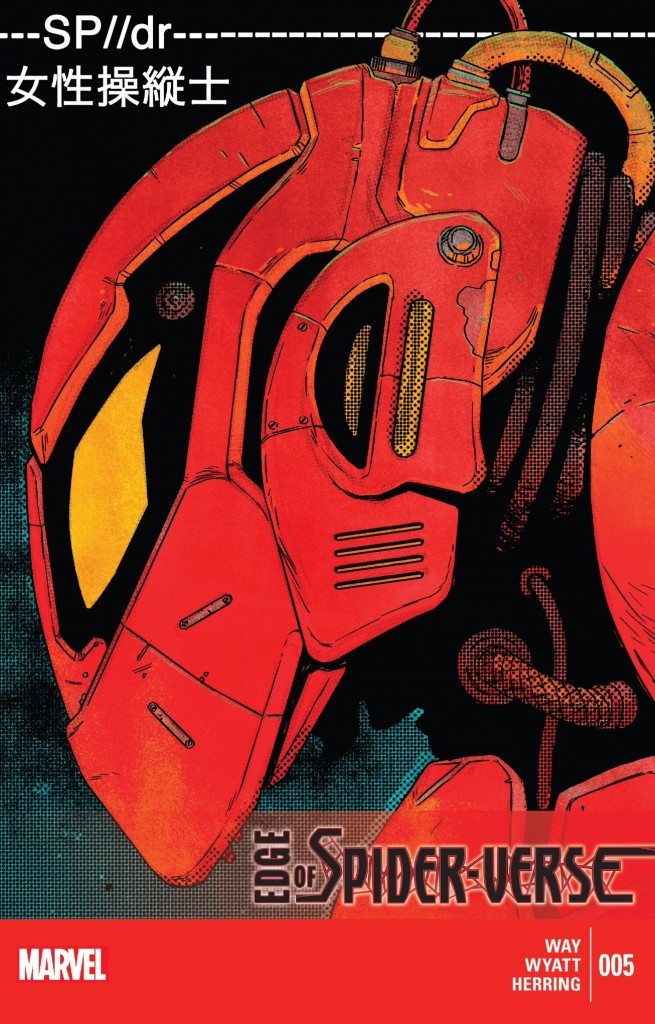 Similar to what Jason Latour and Robbie Rodriquez accomplished with Spider-Gwen and Edge of Spider-Verse #2, Gerard Way and Jake Wyatt’s Edge of Spider-Verse #5, creates a wholly unique universe that appears to speak its own language and operate on its own dedicated frequency – a stunning achievement considering the creators only had one installment of a comic book to pull this off.

With that said, there’s a certain amount of sterility and coldness with this issue and its characters, specifically the protagonist, Peni Parker, who wears the suit and armor of the mechanical hero SP//dr. The story’s overall coldness keeps me from joining in on some of the calls asking for this universe to get its own ongoing series a la what was recently announced with Spider-Gwen. 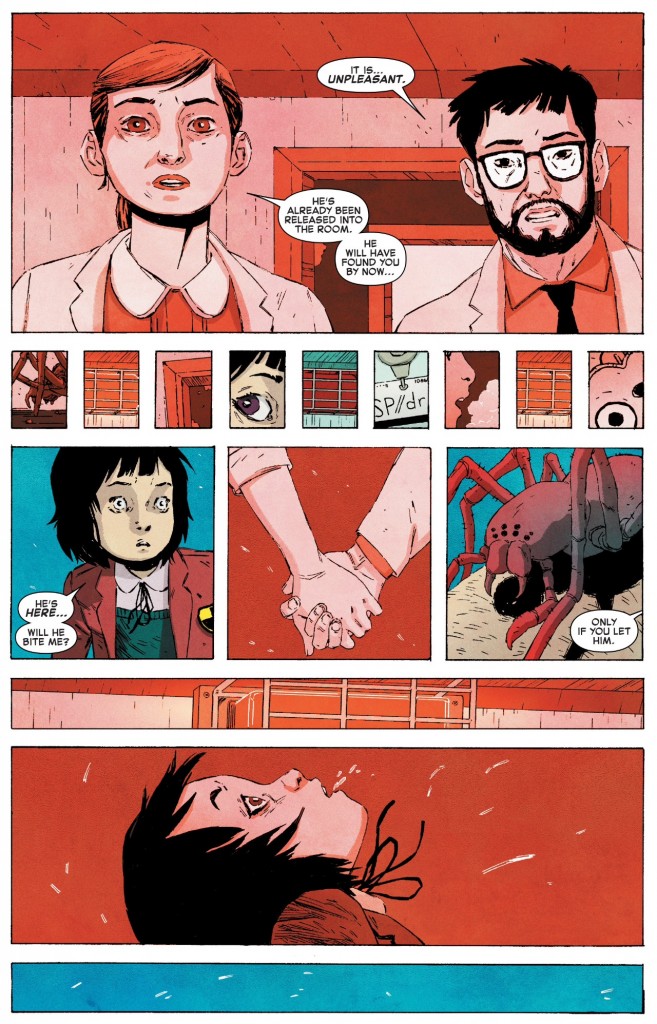 Perhaps part of my disengagement from the issue comes from the fact that I’m not much of a fan of Way’s other artistic endeavors – namely his prominent role fronting the “pop punk,” “violent rock” (just don’t call them “emo” at risk of riling some people up) band My Chemical Romance. I remember my sister-in-law, who’s 10 years my junior, playing some of their tracks for me when she was in high school, and it just never clicked with me. Probably something my parents’ parents said about those Beatles and Rolling Stones kids.

Regardless, there’s no getting around the general aloofness of this comic. Like Edge of Spider-Verse #3, Way and Wyatt place their alternative Spider-Man in a dystopian, technology-centric Blade Runner-esque universe that’s dark and despairing. There are a number of sequences where characters just seem resigned to do what they do because that’s what’s required of them. As a result, the main characters of the story lack the emotional fire and passion that we got from Spider-Gwen. As demonstrated in the Amazing Spider-Talk interview with Latour and Rodriguez, these two operate with a high level of energy and enthusiasm that bleeds into the comic. 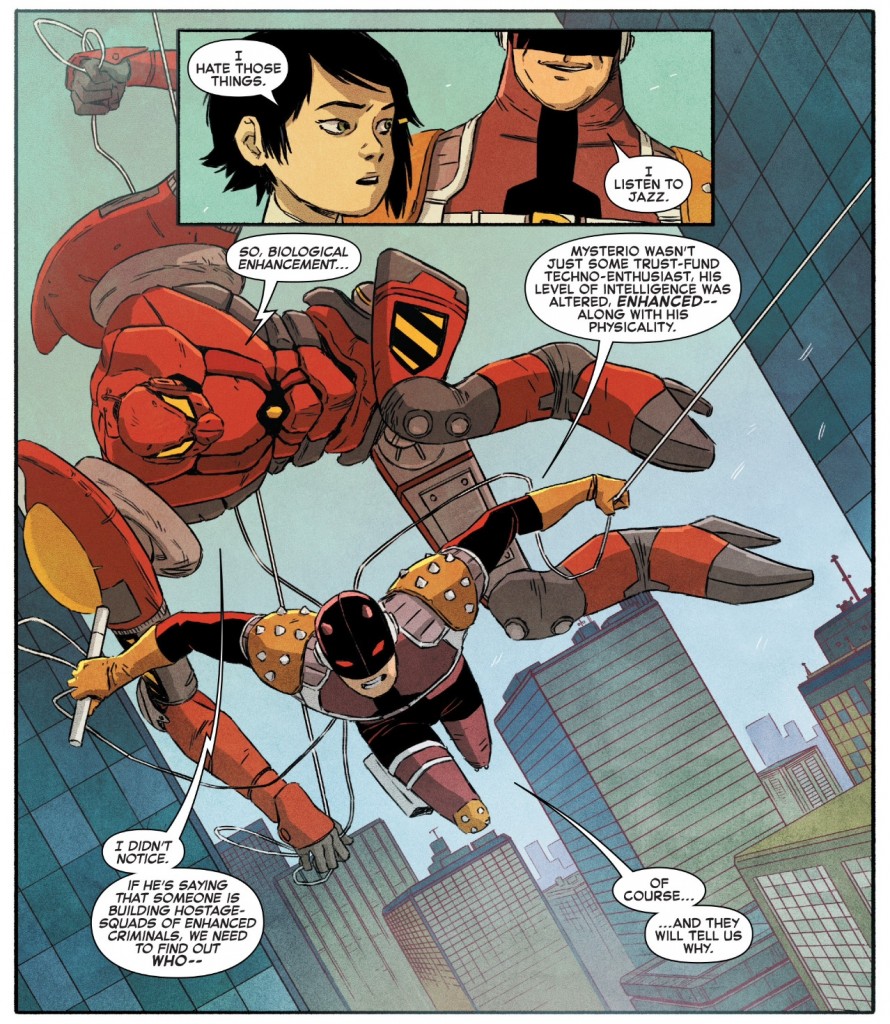 That’s not to say that Way and Wyatt aren’t enthusiastic about their characters. To his credit, Way is quite comfortable in this world and knows who he’s writing about. Peni is fully-formed, has a distinct personality, and a logical explanation for why she’s this universe’s version of the hero Spider-Man (in this instance, it’s because of the death of her father, the original SP//dr, and someone with his genetic makeup “must” continue on as the hero). But similar to some of the problems that plagued Tony Stark for years, it’s hard for readers to connect with a character that’s embedded in a suit of steel and metal (that’s one of the big reasons people thought it was risky to kick off their cinematic universe with an Iron Man flick – fortunately Marvel Studios NAILED casting with Robert Downey Jr. and billions of dollars later, everyone can laugh about that risk). 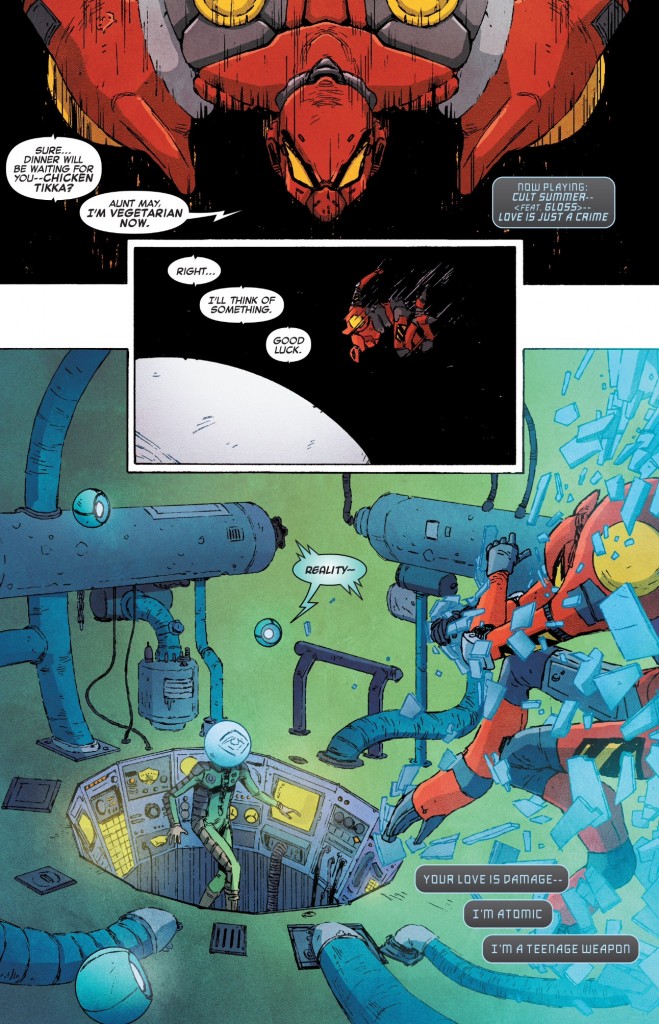 There are undoubtedly things that I really liked and thought were quite clever about Edge of Spider-Verse #5. There was a very specific emphasis on music throughout this comic (which makes total sense given the author) and the way these characters speak is almost lyrical and melodic (there’s one sequence involving Peni and an alternative version of Daredevil that reads like a conversation put to music). The twist involving this universe’s version of Mysterio – that he’s actually a fan, bordering on stalker of SP//dr and is thereby willing to help her – is a fantastic bit of writing/characterization.

Wyatt brings a unique twist to how he plots the book. There’s one page early on where Peni’s instructions in becoming the SP//dr are explained and Wyatt integrates a number of tiny square panels with cinematically-detailed shots within a larger spread of traditional comic book images. 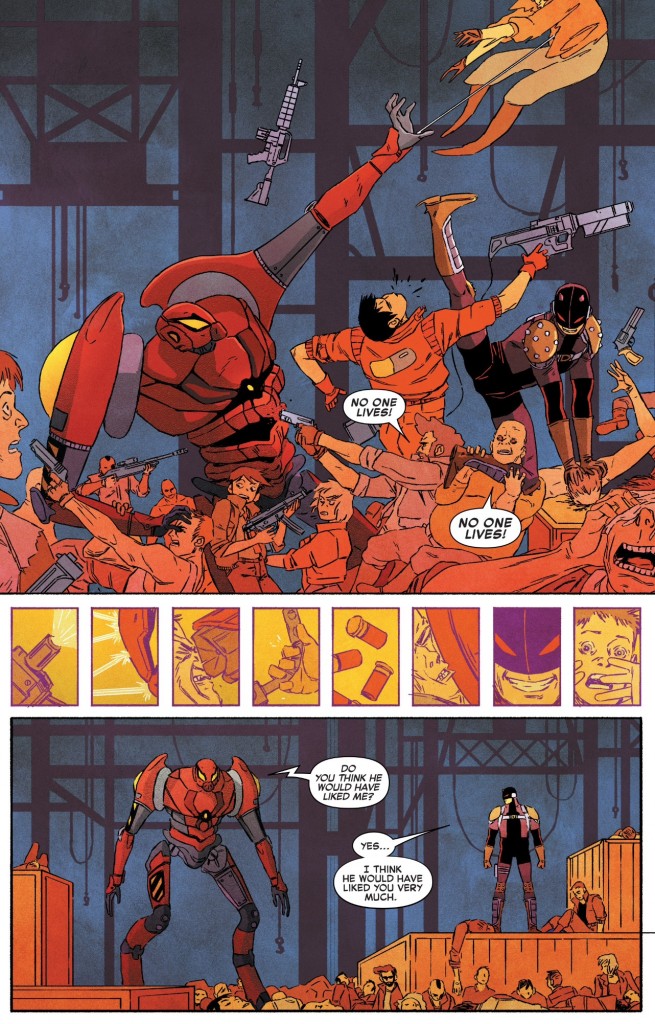 The million dollar question is, can I, as an almost middle-aged reader who’s been reading Spider-Man comics written by the likes of Stan Lee, Roger Stern, Gerry Conway, J.M. DeMatteis and Tom DeFalco for nearly 30 years, identify with this universe and its characters enough to want to keep spending part of my month there?

When I reached the end of Spider-Gwen, without a shadow of a doubt I was clamoring for more, more, more from Latour and Rodriguez and I was legitimately giddy when I saw an ongoing was announced at New York Comic Con. I can’t say I’m as passionate for SP//dr, though I don’t begrudge anyone who feels otherwise. One of the very beautiful things about Edge of Spider-Verse is it really did offer a little something for everyone, in every corner of the Spider-Man universe of fans. I liked some stuff more than others, but graded as a whole, this was a shockingly awesome miniseries that introduced me to a number of new storytellers. Marvel needs to do more series like these when it starts to pump out its big events.