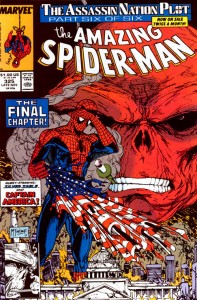 In honor of Independence Day, I thought it was appropriate to discuss Amazing Spider-Man #325, a David Michelinie/Todd McFarlane issue that was one of the few instances I can think of where Spider-Man’s patriotism and loyalty to the United States was the central plotline of a story.

ASM #325 comes is the final installment of the “Assassin’s Nation Plot,” an arc I’ve admittedly never been a huge fan of because it focuses on a convoluted story dealing with the assassination of a political figure from the fictitious nation of Symkaria, the homeland of one of my least favorite Spidey supporting characters (and a real favorite of Micheline/McFarlane based on how often she shows up in their run) in the Silver Sable.

With a few notable exceptions – including a spread in ASM #38 plotted by Steve Ditko as a thinly-veiled “FU” to the student protest movement of the 1960s – the world of Spider-Man has often been an apolitical one. I’ve never really been too sure where Peter Parker lies on the political spectrum, and I’m perfectly ok with that. Reading the occasional Ronald Regan or Jimmy Carter joke in a back issue is all the political talk I really need from a Spider-Man comic. If I wanted to read overly complicated stories of international political intrigue and espionage, I’d pick up a S.H.I.E.L.D. book.

But “Assassin’s” is about as political a Spider-Man can get. There’s a Cold War vibe to the story, even if Michelinie is pitting the United States against the considerably smaller and assumingly more militarily modest Symkaria, as the two countries almost declare war on each other over the deaths and near-deaths of all these political officials. And if the political stakes weren’t high enough, Captain America shows up for the last few issues to play peacekeeper.

In the opening pages of ASM #325, Spider-Man is set to join Cap and Sable on their mission to protect the Symkarian Ambassador to the U.S. (who’s reportedly next on the hit-list), but he’s denied security clearance from an American Colonel because he won’t take off his mask and reveal his secret identity. 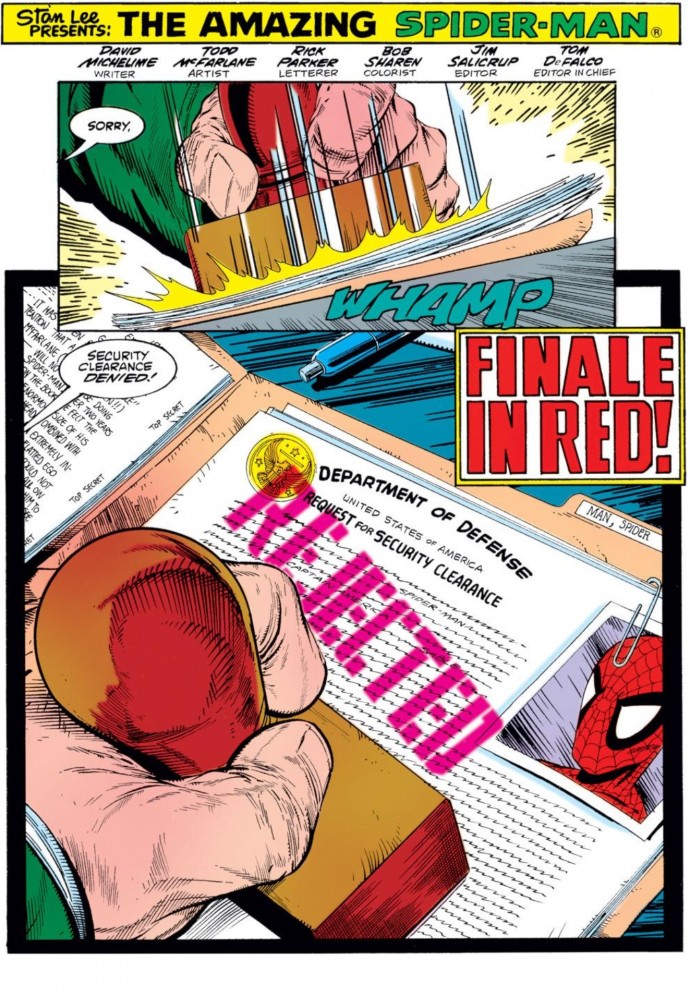 It’s a valid point – and one that gets revisited in the pages of ASM and the Marvel Universe in the mid-2000s during the build-up of the Civil War storyline. The New York City Police Department has never seemingly trusted Spider-Man for being a masked vigilante, so it makes sense that the government would follow suit, even with Captain America lobbying on his behalf (though, come on … it’s Captain America and some Colonel is going to question this guy?). Of course Spider-Man goes to Washington, D.C., to help out Cap and Sable, even without proper security clearances, because as Mary Jane points out, that’s just part or Peter’s DNA. 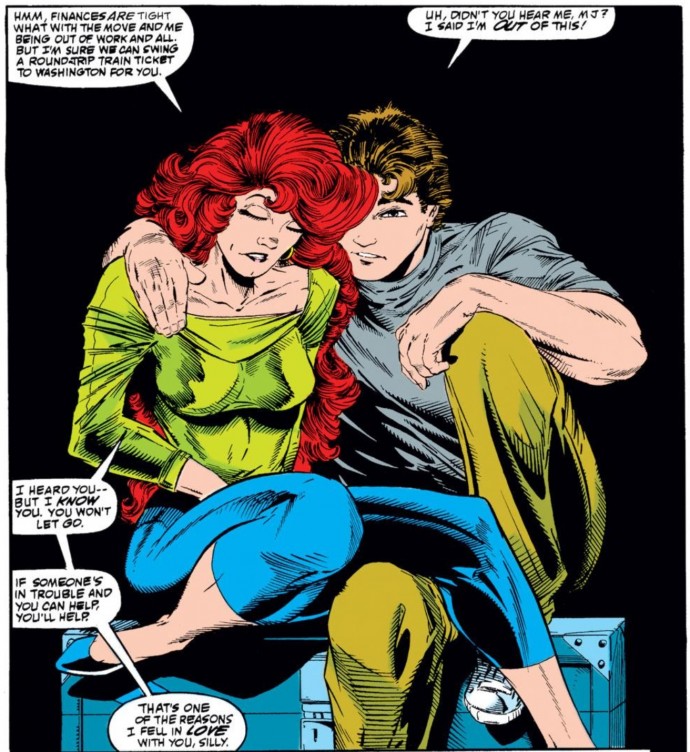 What starts troubling me is this idea that Peter’s obligations to do the right thing here have something to do with patriotism and the political sensitivities of the U.S., rather than just his core characteristics. Despite feeling a bit insulted by the Colonel’s rejection, Peter learned all the way back in Amazing Fantasy #15 that if you have the ability to use your powers to help somebody, you go ahead and do it (or better yet, “with great power, comes great responsibility”). The fact that Michelinie keeps wrapping Spidey in an American flag seems irrelevant. And it gets worse as the issues reaches its conclusion. 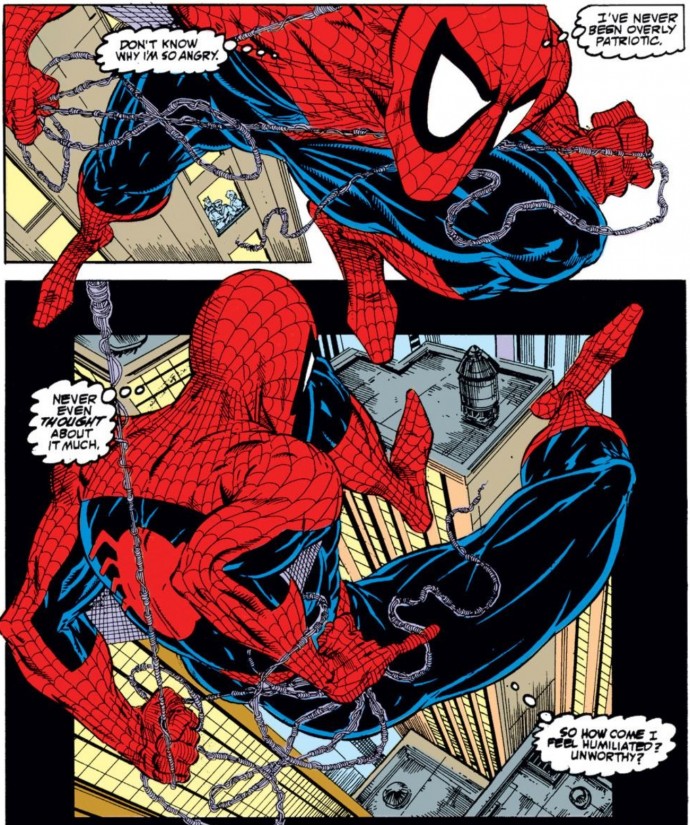 During his unsanctioned solo mission, Spider-Man finds himself in the National Archives where he believes a terrorist group is about to steal some of America’s most valuable documents like the Declaration of Independence, and set-up Symkaria to take the fall (assuredly starting a war). That’s when the nefarious Red Skull – one of my favorite villains not to be associated with Spidey – reveals himself to be the mastermind of the whole plot. I love using the Red Skull in this situation because his past interactions with Spider-Man are so sparse, the confrontation has some real drama. Lest we forget that Spidey and the Skull HAVE crossed paths once before … and it’s because of this continuity oversight from Michelinie that the story goes off the rails for me.

As we learned in Amazing Spider-Man Annual #5, Red Skull framed Peter Parker’s parents as traitors to the United States before orchestrating their deaths in a plane crash. The comic features a memorable and emotionally charged battle between Spidey and the Skull, where Spider-Man emerges victorious while clearing his parents name in the process. The fact that these events are not even whispered about in ASM #325 is bad enough, but then Michelinie really goes on to rub salt in the continuity wound by having the Skull offer Spider-Man $1 million to walk away and pretend he never saw anything fishy in the National Archives. And Spider-Man actually CONSIDERS it for half a second because of some financial problems he and MJ are having. 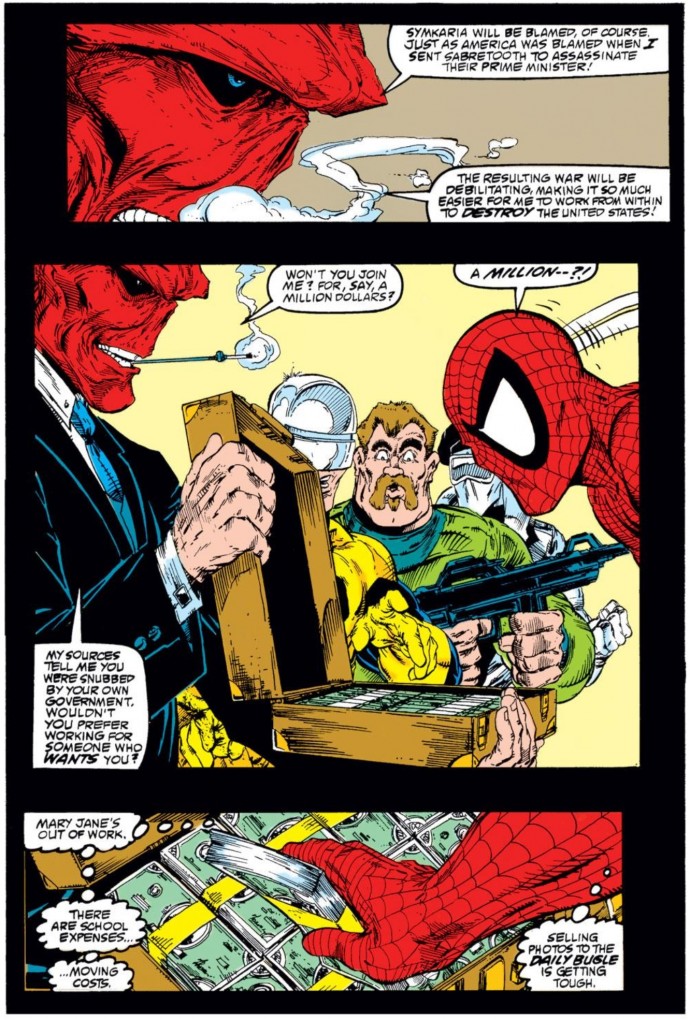 In all honesty, I don’t actually subscribe to the line of thought that Spider-Man is purer than pure and is incapable of acting in a questionable way. I made that argument during my write-up of Superior Spider-Man #9 when some critics of the comic thought it was unconscionable that “just for a moment” Astral Peter debated interfering with a little girl’s surgery in an effort to prevent Spider Ock from discovering his presence in his brain patterns. But one thing Peter has always been is loyal to is his family and friends, especially after the death of his Uncle Ben. How he would even have a micro-second of hesitation when faced with the Skull’s offer given the history the two have is beyond the pale.

Just in case I wasn’t ticked off enough by this comic’s plot, Red Skull disregards Spider-Man’s rejection of his money as a case of blind patriotism. And based on what transpires throughout the rest of this issue – Spidey has an “aw gee, I guess I am a loyal American” moment after Cap, Sable and the Colonel thank him for his admirable actions in recording the Red Skull declaring he was behind the whole assassination plot – the reader is basically supposed to accept that yes, Spider-Man did the right thing because he’s a patriot. Not because he was being bribed by the person responsible for the death of his parents and the besmirching of their names. 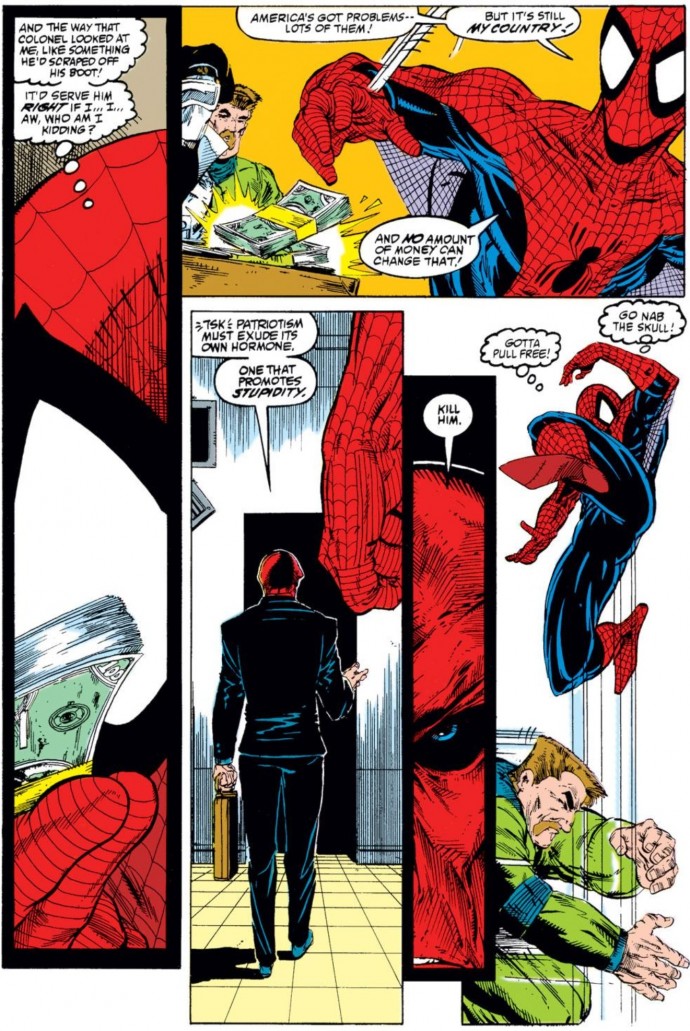 It’s not that I doubt that Spider-Man is a patriot but the whole concept just feels so out-of-place and unnecessary as a critical part of this arc’s conclusion. There had to be a better set-up for Spider-Man to earn his stars and stripes than having him reject someone as personally tied-in to his past as the Red Skull. If that was the direction Michelinie and Marvel wanted to go, things could have been considerably more effective with another international thug like Baron Zemo. But I’m going to go out on a limb and guess that with a rising star like McFarlane drawing the issue, they wanted to give him another signature Marvel character to illustrate. So viola, here’s the Red Skull, but let’s gloss completely over anything from the past that might be relevant for a Spider-Man comic.

Beyond the circumstances with the Skull, I just found ASM #325 to be a half-hearted attempt to try and demonstrate the differentiation between heroism and patriotism. And I don’t know if such a differentiation really exists unless you’re dealing with an anti-hero like Wolverine. It’s generally understood that a hero defends and fights for the forces of “good” – and in whatever country you live in, you’re traditionally led to believe that your nation is on the side of “good.” So with that in mind, I don’t need an issue of a comic book to explicitly make the case that an American-born and created hero like Spider-Man is loyal to the United States. That should be a given.