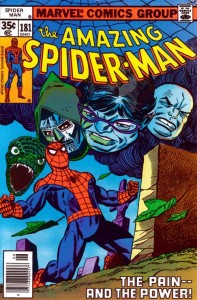 As someone who started reading Amazing Spider-Man comic books 296 issues (and 25 years) after they debuted, I’ve always come to understand Peter Parker/Spidey’s origin story in a roundabout way. Given some of the expected changes on the horizon after ASM #700 is released in a few days, I’d like to spend a few “remembrance” posts looking at those significant origin issues in my life.

In my write-up for ASM #698, I jokingly referred to the pre-twist story as the comic book equivalent of a television bottle episode – when budget-strapped creative teams stick to minimal or frequently used set pieces, and lean heavily on previously-filmed footage to piece together a show. NBC’s Community, naturally, sent up the entire bottle episode art form during its second season with “Cooperative Calligraphy,” but that’s not to say that all of these types of episodes are guaranteed bad television. But most of them are.

ASM #181 is undoubtedly a bottle episode in comic book form – a total rehash of the Spider-Man origin story set to the backdrop that it’s the anniversary of the death of Peter’s Uncle Ben and he’s now visiting his grave and reflecting. There’s no new information in this comic book – no character development or insight into why past activities happened the way they did. It’s just Peter running through his rogues gallery, the loves of his life, and the significant of his Aunt and Uncle. I don’t know the back story of the genesis of this issue, though given the fact that it was early in Jim Shooter’s run as editor-in-chief, and given what a state of organizational disarray Marvel was in during the immediate moments preceding Shooter’s arrival, maybe this was the best the creative team could punch out in order to meet their monthly deadline. 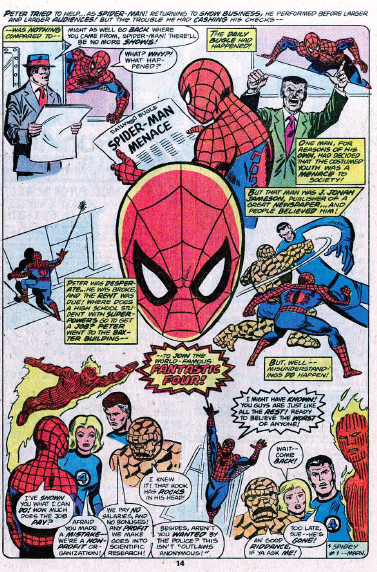 With that said, it’s intriguing to look back at an issue like this and examine how my perspective has changed about the quality of the book. After just re-reading this for the umpteenth time in anticipation of this post, I can’t help but cringe at the overall laziness of the issue. It’s filled with a combination or large panels recreating historic moments in ASM history along with large blocks of text trying to cram as much information in as possible. The issue is essentially a Spider-Man handbook posing as a comic book. There’s a  minor twist at the end – Peter places his old microscope at Ben’s grave and within minutes, someone working the nightshift at the Cemetery lifts the device to give to his own son as a birthday present. I guess that functions as another example of that terrible Parker luck, but the whole thing always struck me as a little callous (I think if I forgot my son’s birthday and the gift I got him was lifted from a graveyard that I would have some serious explaining to do to my wife). 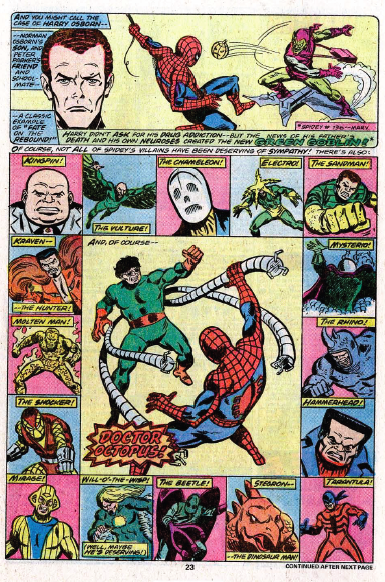 And yet it was such a fantastic “get” for me when I was kid searching the back issue bins at my local comic book shop. I can’t imagine I paid a terrible sum for the comic, and I remember reading it religiously since it was the first “back issue” I ever owned that so thoroughly laid out the origin story and then the 180 issues that followed. This Spider-Man cliff notes comic is where I learned pretty much everything that seemed important to know as a Spider-Man fan who came to these comics so many years after the fact. In ASM #181 I learned (snippets) about folks like Gwen Stacy, Flash Thompson, Aunt May, Doctor Doom and the Punisher. If it wasn’t for this comic book, I probably would never have become interested in trying to acquire ASM #’s 33, 121 and 129 because I would have never understood their significance as part of a larger canon.  And considering what a superfan of the series I went on to become, that makes this comic a very significant part of my collection.