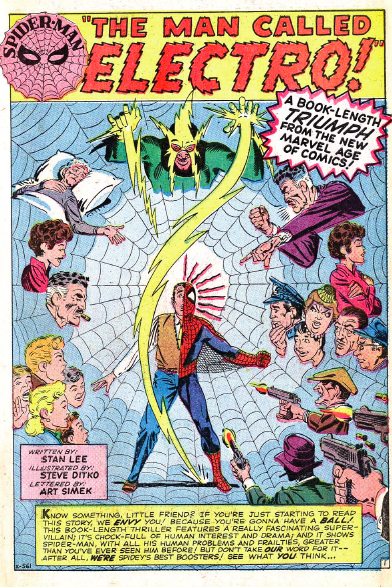 While the comic book medium is notorious for its “can you top that?” mentality, sometimes that old K.I.S.S. adage (depending the edginess of your audience, it’s either keep it simple silly or stupid) really holds true. While I appreciate backstories with incredible depth and development, or storylines with shock-twist endings, there’s nothing wrong with the creative team taking a straightforward approach without overthinking.

It’s for this reason that I’ve always had a soft-spot in my “make mine Marvel” heart for Max Dillon, aka, Electro. While the mystery of the identity and the origins of the Green Goblin make for great reading material, and the depth of a bad-guy like Doctor Octopus gives him a legitimate claim to being one of Marvel’s best villains of all-time, Electro’s origins and motivations are something out of the Golden Age-era of comic books where it was more about the powers and attributes than actual story (hey, look, Superman can fly and is impervious to bullets. The Flash runs really, really fast).

Just now I’m imagining the creative team meeting in the 1960s with Stan Lee and Steve Ditko. They’re probably up against a deadline and after using a killer robot in ASM #8 they figured it was time to come up with a brand new supervillain to be a long-term antagonist for Spider-Man. After hours of deliberating, they’re still at a loss when Stan and Steve start looking around the room for inspiration.

Stan: How about coffee man? He’s hyper-caffeinated which gives him incredible power and speed.

Steve: Would the comic book authority object to that? Sounds like a drug story to me.

Steve: I’m not drawing a villain who’s calling card is to “poke somebody’s eye out.”

Stan: Yeah, you’re right. That sounded stupid just coming out of my mouth. Why don’t you plug in the TV and maybe we’ll get some inspiration there.

Steve: Are you kidding me? Do you see how frayed that power cord is? I could get electrocuted and die…

All fan fiction aside, Electro is about as dumb-downed a villain  you can ask for. Blue collar lineman is on the job when a bolt of lighting hits him. But instead of killing Dillon dead, he instead gets the power of electricity. He gets more “power” by charging himself (working in a nice tie-in to another Marvel character by stealing equipment from Stark Industries) and rather than using his new-found power to make the world a better place, does what any average joe-schmo who probably hates his job would do, and turns to a life of crime. 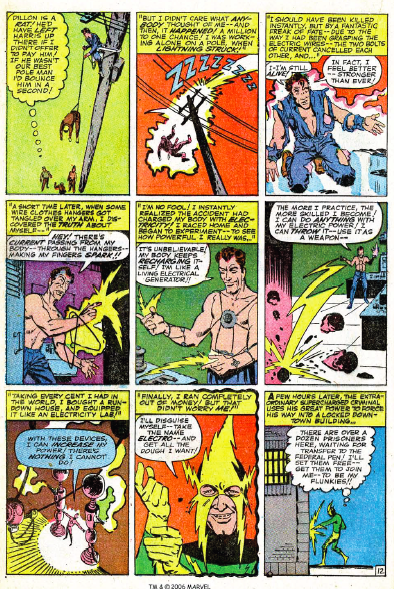 Out of this simple tale of, man gets hit by lighting, man gets electrical powers turns to life of crime, we have a character who has truly earned a spot in upper echelon of Spidey villains. He’s a member of the original Sinister Six, has been featured in nearly every piece of outside Spider-Man media (i.e. television shows, video games, etc. – he was even a rumored villain in one of the Spider-Man films) and has been a thorn in the Web Slingers side since his inception. Sure, Doc Ock has a more complicated history with Spider-Man, Green Goblin has wreaked more havoc, and Kraven still gets points for burying Spider-Man alive, but after those three (and I’ll add Venom in there for all you symbiote fans), Electro is near the head of the pack for the next tier of adversaries. If we were in school, I’d call him a B+ villain.

Of course time and changing industry trends have caused Dillon’s character to evolve in recent years. When he was brought back to the pages of ASM in 2008, writer Mark Waid chose to make him a voice of the anti-Wall Street/Bailout movement (no word if Electro was providing power in Zuccotti Park during the recent OWS protests).  I have nothing against this evolution, but there’s a part of me that believes Electro never really needed that level of motivation or intelligence. He is what it is. He has electrical powers because he was hit by lighting. It’s that simple. Nothing wrong with that.