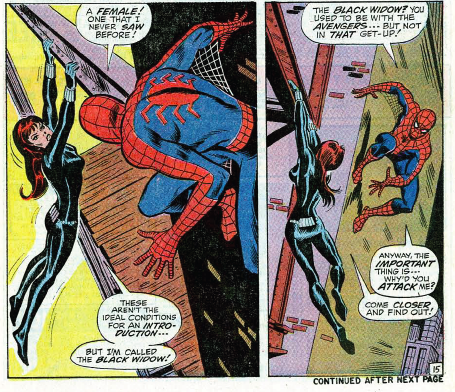 Though I often complain about the cynical nature of comic books, I thought I would take advantage of all the “Avengers-mania” connected to the new blockbuster movie (in theaters today!) and do a post about a featured character in that movie, Black Widow. Of course, I have an ulterior motive in talking about Black Widow – as what I really want to do is talk about feminism in comic books.

Are you still there? Great. If I already didn’t scare you away on Wednesday when I promised not to talk politics in connection to ASM’s “Obama issue” in 2009, then I guess a little chit-chat about the portrayal of female characters within the Spider-Man universe isn’t going to totally turn you off. Or maybe it will and you can leave me some angry hate mail at my gmail account or something (or in the comments section. Why does the comments section on this site always run so hot and cold?).

Anyway, the timing of this topic du jour is actually quite fortuitous, as I honestly had forgotten all about the events of ASM #86 despite the fact that it marked a significant character transformation in the form of the Black Widow updating her costume to the sexy black leather get-up that some percentage of the site’s audience may recognize as the outfit they’ve mentally undressed off of Scarlett Johansson. Regardless, probably because this comic book was sandwiched between a couple of major ASM storylines at the time – the ongoing “tablet” mystery that seemingly went on for issues, and then the death of Captain George Stacy and its appropriate fall-out which kicked off in ASM #88 – I don’t remember ever reading this issue cover-to-cover before. As a result, a recent ASM-reading marathon brought about by my somewhat crazy desire to do a “best of” series this summer to coincide with Spidey’s 50th anniversary (we’ll see if I do it) reintroduced me, or maybe just introduced me to the contents of this issue. 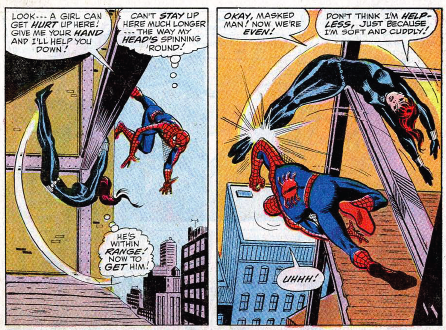 What struck me as particularly noteworthy was Spider-Man’s general attitude towards the Black Widow. The cover of this issue promotes Widow as a “female copy” of Spider-Man but rather than paint her as some kind of strong female character, Spidey spends the bulk of the issue worrying for the safety of the female flying along the New York City’s skyline. It’s incredibly off-putting but then I realize that good old Stan Lee takes a similar approach a few issues earlier in ASM #62 when Spider-Man does battle with the female Medusa over what is essentially a botched hairspray ad. The issue also features the very pro-feminist quote from Spider-man “But that’s the problem with women … they just can’t keep their mouths shut.”

Granted, this kind of concern for the “poor wittle girls” in the Marvel universe could be just as much a product of the era these comics were produced in, the 1960s and early 1970s, but as someone who came to the Spider-Man universe in the late 1980s – a seemingly more progressive era – I never really thought when looking back I would find myself debating whether or not Spidey/Peter Parker has a problem with women. After his Uncle Ben is murdered, he’s raised by his Aunt May, who granted, can come across as weak and sickly for a number of issues, but has her moments of profound insight and strength. Meanwhile, the primary love interests for Peter during this era are all women who seem to have some layers of depth – except for the one he inevitably marries of course. Betty Brant’s indecisiveness and petty jealousy can be laid on a bit thick, but you have to respect the fact that she just doesn’t take Peter’s mysteriousness without some pushback. As for Gwen Stacy, the fact that she’s “gorgeous” seems to be front and center in the storyline, but there’s also an intellect and sensitivity to her that elevates her above other typical “girlfriend” characters in comic books. It took Marvel a number of years to make Mary Jane interesting, but by the time they did, they really hit a home run with the character. So what’s with these moments of overt sexism from Spider-Man when it comes to Black Widow, and Medusa? 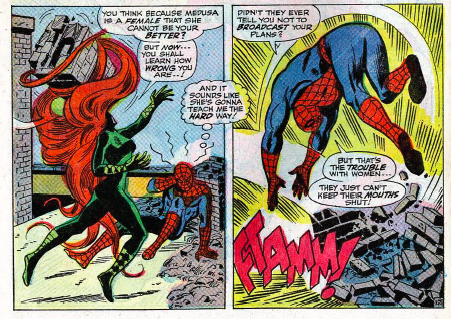 I hesitate to honestly think Stan’s writing cuts this deep, but I know from being a bit bullied myself as a kid and teenager that there’s a social pecking order and when you find yourself near the bottom of the ladder, you have a tendency to lash out on the few people who are even lower than you. Maybe that was the case with Peter here – tired of being pushed around by the likes of Flash Thompson and Harry Osborn, once he dons the mask of Spider-Man, he resorts to chauvinism with costumed superheroes and villains who happen to be women. That, and plenty of fat jokes for Kingpin.

What’s more shocking about ASM #86 is the fact that for an issue that was used primarily to launch Widow in her own solo series, you’d think Marvel would have done a better job as building her as some kind of badass female character rather than someone who emits pangs of sympathy from her male counterparts. Heck, you could even have Spidey ogle her new leather outfit if it makes her look like a character you want to build a series around. Granted, that doesn’t solve the issue of sexism, but at least it makes me think that Spider-Man is just being a horny guy, rather than a condescending jerk.