When I think “love” and “Spider-Man” an outsider may assume I’m going to talk about Peter Parker’s long-time relationship with Mary Jane Watson – that IS the girl he married after all. But maybe because Spider-Man is a comic book that’s as much about loss and responding to loss as it is about web shooters and funny one-liners that for a pseudo-Valentines Day themed post I actually want to talk about some of Peter’s early interactions with his first great love, Gwen Stacy.

This is not to say that I prefer Gwen to Mary Jane though I know many fans do. In fact, I would wager that the great status quo public pushback of One More Day/Brand New Day had more to do with the lazy way it was implemented rather than the actual eradication of Peter and MJ’s marriage. However, as he famously told Brody in that New Jersey mall in Mallrats, Spider-Man’s creator, Stan Lee was an old romantic at heart, and as a result when going back and reading some issues by the Lee/John Romita Sr.-era of ASM, I found the whole Peter/Gwen dynamic to be quite charming. It’s too bad the Green Goblin had to ruin it for everyone by throwing her off a bridge and killing her.

After recently re-reading a number of issues going back to Gwen’s first appearance in ASM #31, my one complaint about the whole development of their relationship is the whole thing came across as a little too out of nowhere for me. Not that there weren’t flirtations there – it’s established early on that despite his social aloofness, Gwen sees something a little different in Peter. Peter is very open about the fact that he finds her attractive, but during the span of about 20-or-so issues he flirts with her, goes out a few times with MJ, gets into a couple of arguments, has amnesia thanks to Doc Ock and then suddenly is on the cusp of dropping the “L” bomb with her after they have a huge misunderstanding centering on the fact that Gwen walks in on Peter accidentally knocking over her elderly father who’s been brainwashed by the evil Kingpin. Phew….

Point being that while Peter and Gwen went on to have a very passionate romance in the pages of ASM, I was initially stunned when I was rereading these earlier issues and in one comic Gwen and Peter were just flirting and by ASM #59, Gwen is throwing her arms around him and smooching him in front of her father. Then two issues later, she’s so beside herself on what she thinks Peter has done to her father, that she’s absolutely depressed and despondent until her father clears up the misunderstanding and Peter is absolved of any potential wrong-doing. Despite the fact that Stan had been teasing this romance for dozens of issues, there still wasn’t any real build from “occasional interaction at school” to “going steady.”

And considering how important Gwen’s love ends up being in the world of Spider-Man, a part of me wishes the build could have been stronger. Compare how Peter and Gwen were brought together with the way Mary Jane was first introduced – with what amounted to years of fanfare and arguably one of the most iconic panels and catchphrases in comic hook history. To follow all that up, the first few pages of ASM #43 show Peter and MJ interacting in a very funny give-and-take. Throughout this time period, Gwen seemed to be operating more as a plot device – someone to put in the group along with Harry Osborn and Flash Thompson who would defend Peter when the two bullies ripped on him. In many ways, Gwen was no different than Liz Allen, who spent the bulk of the Lee/Steve Ditko-era playing devil’s advocate to Flash the bully when it came to Peter.

Yet Gwen was eventually chosen to be the first “true love” for Peter and it’s a logical choice. She’s smart, attractive, has a strong relationship with her family. She’s the opposite of MJ in almost every respect (all the way down to the blondes versus redheads debate). And again, once Lee committed to the relationship, there is legitimate chemistry between the two characters. During the aforementioned “Kingpin brainwashes Captain Stacy” arc, despite the unseemly acceleration of the status of the relationship, I still found myself legitimately caring about both of these characters and whether or not Peter would be able to clear his name and get back together with Gwen. 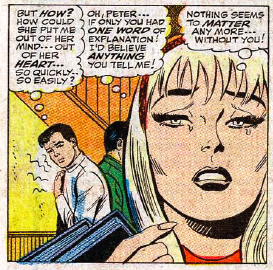 From there, many of you know the story – Captain Stacy is killed during a battle between Spider-Man and Doctor Octopus and Gwen blames Spidey, casting real doubt over her relationship with Peter, who has not yet revealed to his girlfriend what he does on nights and weekends. The black cloud essentially hangs over their relationship until Gwen is eventually killed by the Goblin and from there, it’s a moment that Peter goes on to relive in the pages of ASM countless times. Gwen’s death is almost as important to the development of Peter and Spider-Man as the death of Peter’s Uncle Ben in Spidey’s origin tale. It’s one of those rare moments in comic book history where the hero does not get the girl, and in fact, inadvertently kills her. You could say that perhaps Peter should have never had the chance to love again after that, but Jim Shooter and the comic book boon of the 1980s and 1990s would disagree with you. And I’m not about to sit here and say that Peter and MJ shouldn’t have been married.

Still, in retrospect, it’s pretty amazing that well over 30 years since her death, Gwen Stacy is still a relevant figure in our lives (or at least in the lives of those who read Spider-Man comic books). The fact that she’s the love interest rather than MJ in this summer’s Amazing Spider-man movie will ultimately make her even more relevant (let’s not get into her portrayal in the awful Spider-Man 3). The story of Gwen and Peter is a true testament to the abilities of Stan Lee as a writer – that in the midst of a comic book series about a guy in tights fighting over guys in tights and masks he was able to establish a charming romance between two characters. While I would have love to see Stan build their romance a bit better, the ultimate execution of it once it was going was near-flawless. That kind of attention to detail to the human side of Spider-Man’s life accentuates why this is my favorite comic book series of all time. 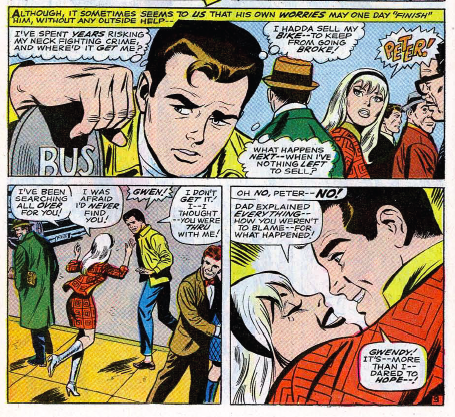