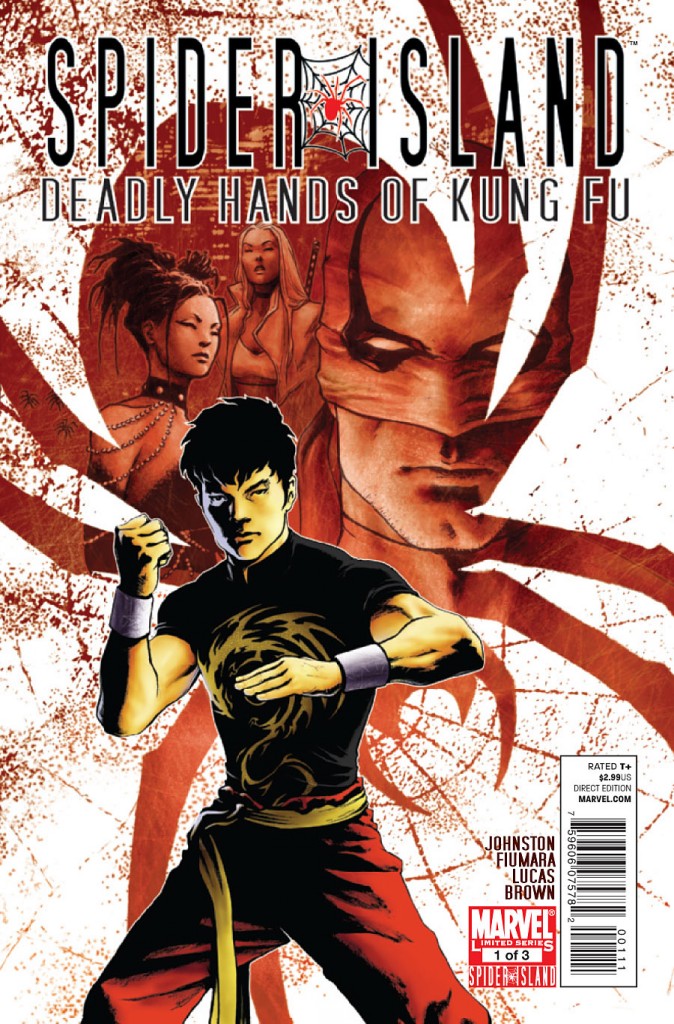 While I’m sure a statement like this is going to have some comic book fans out there asking for me to turn in my “geek card” in shame, I am completely unfamiliar with Shang Chi, the star of probably the most autonomous of all of the Spider Island tie-ins, Deadly Hands of Kung Fu.

Whereas all of the Spider Island tie-ins I’ve talked about so far seem to have their own identity, Deadly Hands of Kung Fu is in a class by itself in terms of tone and mood. Given the cult status and biographical background of Shang Chi, this is not a shocking move by Marvel. However, if memory serves, Shang Chi did play a prominent role in the Free Comic Book Day issue of Amazing Spider-Man a few months ago. So the seed was most certainly planted that the kung fu master would be making his way into a future Spider-Man storyline.

Of course, in Deadly Hands of Kung Fu, Spider Island feels more like a backdrop than an actual setting. Shang Chi now has spider powers like a number of other New Yorkers, but again, that’s really more of a device used by writer Antony Johnston to dive into a completely different kind of story – a kung fu mystery about some shared dreams featuring another team of characters I know absolutely nothing about, the Immortal Weapons. But as I said in previous Spider Island posts, I’m going to use these tie-ins as an excuse to read up on some other characters, and expand my usual Spider-Man-centric tunnel vision. The worst case scenario is at the end of three issues, I decide going forward that anything involving these characters is just not my cup of tea. All that will be loss is some time spent reading and $9 for the three issues.

What’s interesting about Deadly Hands of Kung Fu is it’s a new, yet simultaneously nostalgic experience for me as a comic book. Its form and style is just so different from the standard superhero comic book I grew up with yet as someone who also remembers spending Saturday and Sunday afternoons watching old kung-fu movies at my parent’s house, there’s also something very familiar about Deadly Hands. Sebastian Fiumara’s stylish artwork drives home the essence of these old pulp movies. And while it’s so stylistically stark from anything else that’s currently out there from a major publisher, I also have to imagine that Deadly Hands looks a lot like some typical Marvel miniseries from the late 70s and 80s when kung fu movies were all the rage.

But I can’t lie. The plot here is completely over my head. While I did watch some of these movies as a kid, I was probably 7 or 8 at the time. The memories are fuzzy. I recently re-watched the fight between Bruce Lee and Kareem Abdul Jabbar in Game of Death and while it all looked so familiar to me, I couldn’t for the life of me pinpoint the moment in time where I first saw it. It’s just reaching too far back into the recesses of my mind, and to be honest, I haven’t paid much attention to kung fu movies ever since. So by asking me to get back into the “mindset” while reading this comic, is a big leap, especially as someone who is unfamiliar with Iron Fist and The Immortal Weapons. That’s not to say for the sake of Spider Island I won’t try.