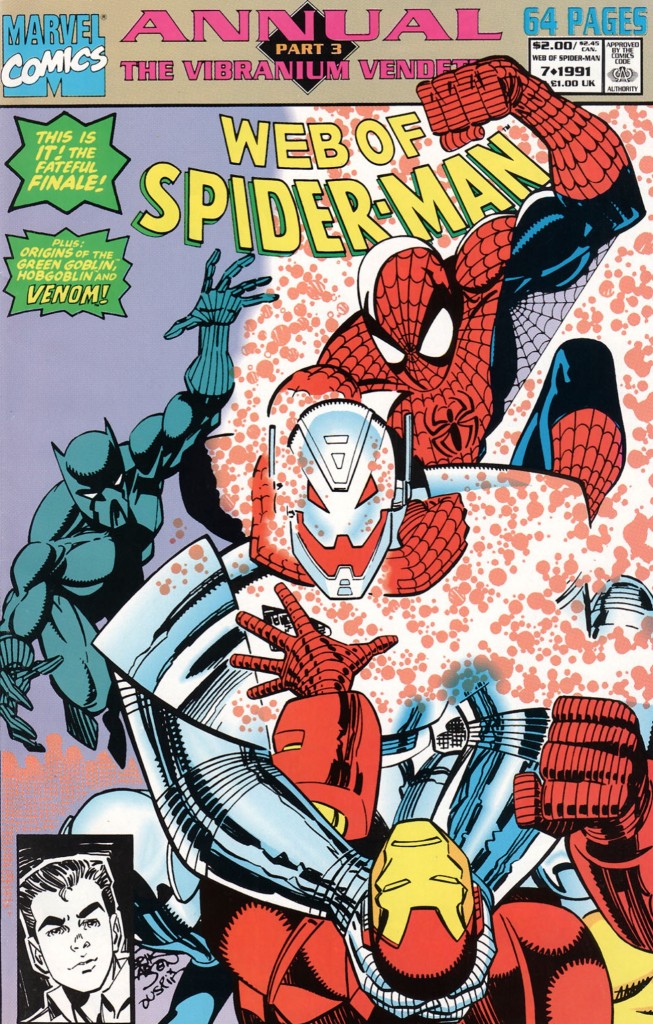 Here’s a case where my inability to remember certain details from the tsunami of Spider-Man published in the early/mid 1990s has led to disappointing results. With Avengers: Age of Ultron clearly being all the rage today (and for the foreseeable future – we are talking about the sequel to the biggest movie ever) I wanted to write about a somewhat relevant Spider-Man storyline as part of my weekly retrospective. Over the years, I’ve written about a ton of comics where Spider-Man teamed-up with the Avengers (or joined them, or failed to join them), so for the sake of no boring you, my dear readers, I wanted to find a slightly different hook this time around.

Then it dawned on me … Spider-Man fought Ultron once. I think. And no, I’m not talking about that Age of Ultron miniseries from 2013 where Marvel couldn’t decide if the guy in the spider suit was Peter Parker or Doctor Octopus. The story I was thinking of was part of some kind of crossover that traversed a bunch of Spidey annuals in the early 90s (and we all know how much I love talking about annuals).

Thanks to the wonderful powers of Google (what did you think I was going to do? Go through every long and short box in my collection until I figured out which story I was thinking of?) I hit upon “The Vibranium Vendetta,” a three-part arc that was published in Amazing Spider-Man Annual #25, Spectacular Spider-Man Annual #11 and Web of Spider-Man Annual #8. In it, Spidey teams up with Black Panther and (sorta) Iron Man to investigate the Roxxon Corporation and its production of imitation vibranium. Wilson “Kingpin” Fisk is also involved with this kerfuffle, and lurking in the background for the duration of the arc is Ultron, who wants to obtain this new substance to reinforce his adamantium body with MOAR POWER RUH RUH RUH (if I need to tell some of you what I’m referencing there, then it’s probably going to make me feel old). 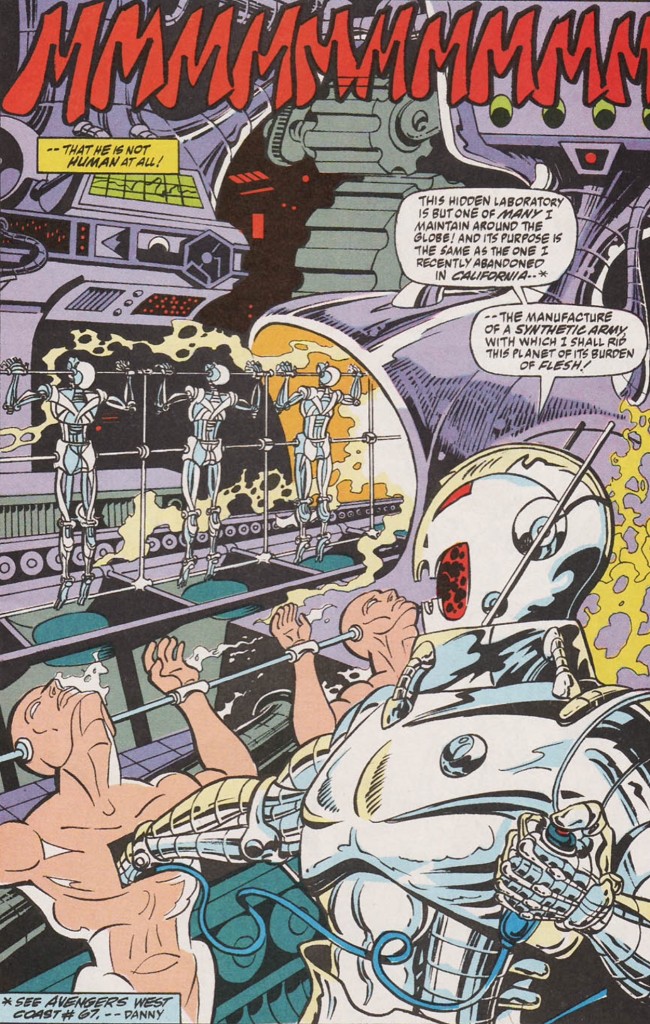 Tangentially, this arc should also be known as three comics that I would have probably never had blogged about if it wasn’t for the fact that they are the only core Spider-Man books I could find that feature Ultron in some capacity. That’s not to say these are bad, terrible comics – “The Vibranium Vendetta” is a totally acceptable story and the fact that David Michelinie, the then-writer of ASM, had scripted it elevates the arc well above the usual inventory schlock that was the stock and trade of annual issues at this point in time.

All the same, once Todd McFarlane left the Spider-books in the early 90s, the vast majority of these Michelinie stories just blur together in a way that makes them nearly impossible to distinguish from each other. Sure there was “Cosmic Spider-Man,” the “Return of the Sinister Six” and an annual Venom arc to break up the monotony, but then pretty much every other comic from his post-McFarlane run featured mass quantities of faceless, Storm Trooper-esque villains that it’s nigh impossible for me to find something from these stories that makes them spotlight worthy for Chasing Amazing purposes. 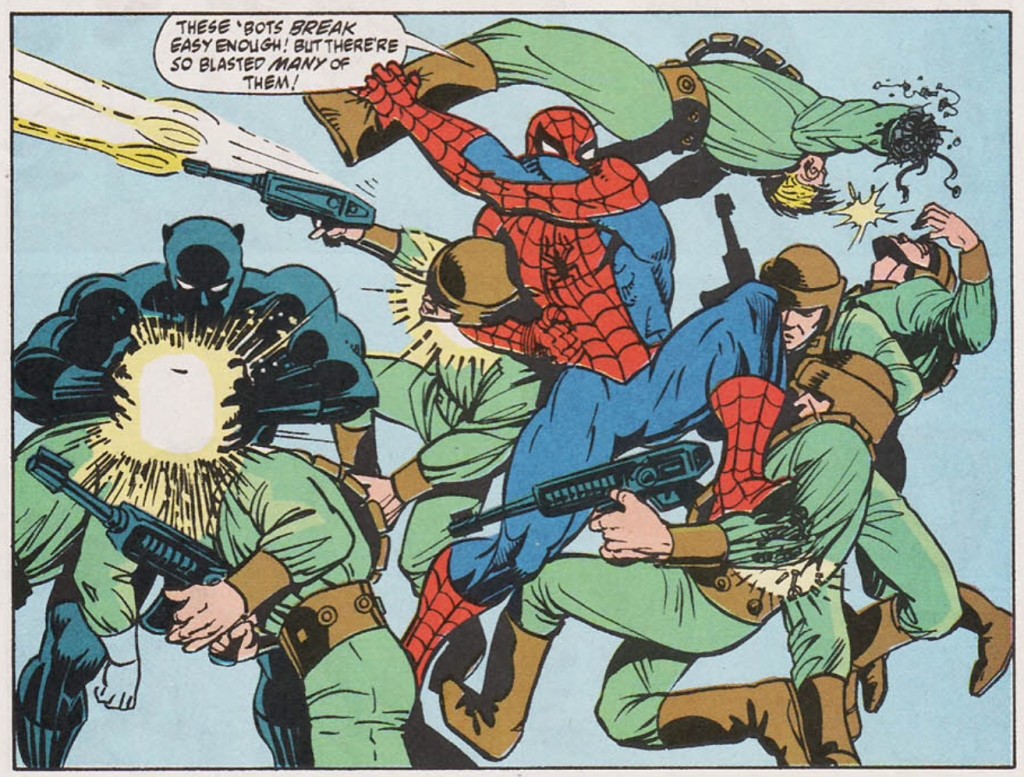 Because of this phenomena, my own Spider Senses should have been screaming when I decided to investigate “The Virbanium Vendetta” for my Age of Ultron post. Obviously I needed to re-read these comics to craft my post since I haven’t given these issues a second look in more than 20 years. But once I was knee deep in re-familiarizing myself with this arc, I realized that Ultron was rendered pretty irrelevant in this story and was there more or less as a reminder for his recent role in a much more famous West Coast Avengers tale. And not to spoil the fun for any of you out there but Spider-Man does NOT fight Ultron in this storyline. In fact, I don’t think he’s ever in the same room as him. Instead, Spider-Man and Black Panther are occupied dealing with a bunch of glass jawed robots while Ultron gets vaporized by some dude in a metal suit named Sunturion, a character Michelinie created during his acclaimed run on Iron Man in the early 80s.

It is a total letdown, especially when you consider the cover to the Web of Spider-Man Annual showing Spidey wrestling with Ultron. But if I dismiss my emotions for a second and look at things pragmatically, I guess I understand why Marvel set it up this way. Despite the fact that the street level Daredevil famously defeated the adamantium Ultron with his billy club during the Ann Nocenti/John Romita Jr. run on that book, Ultron had long been depicted as a special event foe within the Marvel Universe. Anytime he took on the Avengers, the assemblage of “Earth’s Mightiest Heroes” were always overmatched and only emerged victorious by a stroke of luck or good fortune. What chance did Spider-Man have against Ultron? 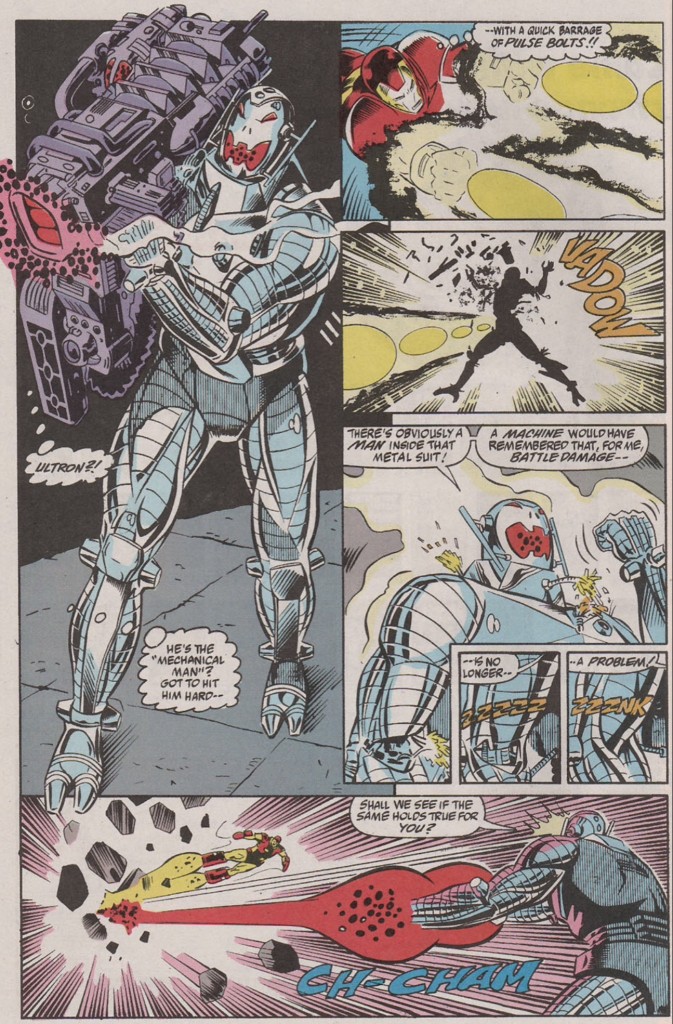 I realize the “Spider-Man can’t beat Ultron” meme is a bit of a strawman argument. It’s not like Spidey hasn’t made a career of finding miraculous ways to defeat guys that were way over his paygrade (Doctor Doom, Juggernaut and Firelord to name three). And this argument is further negated by the fact that the killing blow to Ultron is delivered by a guy in Arthur Dearborn/Sunturion who is barely relevant in comics anymore (if he was ever truly relevant). Maybe from a technology standpoint, Sunturion is better equipped to fight a killer cyborg like Ultron, but when you’re publishing this story across three Spider-Man comics, you better believe fans are tuning in to see Spidey save the day against another unbeatable foe.

Actually, if we really want to jump down the rabbit hole, what was Michelinie doing bringing Ultron into this story in the first place? His quest for more vibranium is a tertiary part of the larger storyline which mostly deals with T’Challa/Black Panther working with Spider-Man and Iron Man out of fear that Roxxon’s experimental material could bankrupt his homeland, Wakanda by offering people a cheaper alternative to vibranium (I’m ignoring the fact that, even as someone who personally has some distrust for a strict capitalist system, how can T’Challa justify bringing in the Avengers to prevent Roxxon from developing a cheaper product, even if it hurts Wakanda’s economy). It turns out Roxxon’s substance had the nasty habit of melting whatever metal it came into contact with, so that added another layer of drama to the arc. But still, where does Ultron fit in? 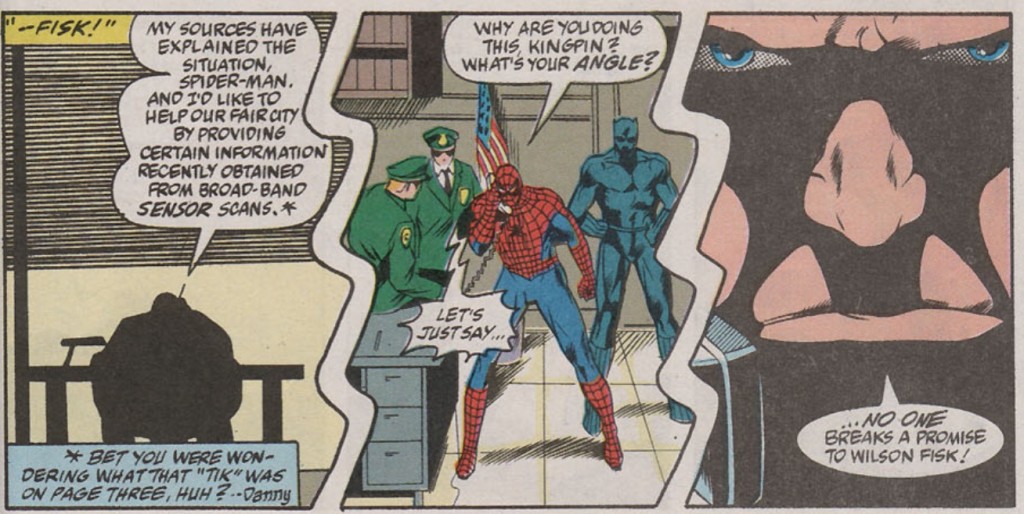 When a character is generally regarded as a special attraction, it feels like a missed opportunity to use him in such milquetoast fashion. At yet this is the closest I can get to highlighting a Spider-Man/Ultron storyline. If only I could remember Michelinie’s early 90s run with a bit more clarity, I might have been able to avoid this time-wasting exercise and found some other random storyline where Spider-Man tries to join the Avengers and fails. We all love those, right?

Anyway, to all of you who get to see Age of Ultron this weekend, I hope you enjoy it. I have family coming into town so I don’t think I’m going to get to it, and I’m now looking at my calendar and wondering when I will. So avoid talking spoilers with me here or on Twitter in the interim!