The powers that be will never acknowledge it, but I can say with near-certainty that there is a Marvel title currently on the rack that actually features Peter Parker as Spider-Man. It feels silly to even be acknowledging such a fact, but considering the two current incarnations of Spider-Man are the hero’s arch-nemesis occupying his mind, and a Latino teenager, stumbling upon Peter, in the flesh, in the first two issues of Brian Michael Bendis/Bryan Hitch’s new mini-series, Age of Ultron, has been a breath of fresh air. It’s the equivalent of discovering an old friend on Facebook and wondering why the two of you haven’t connected in some time. 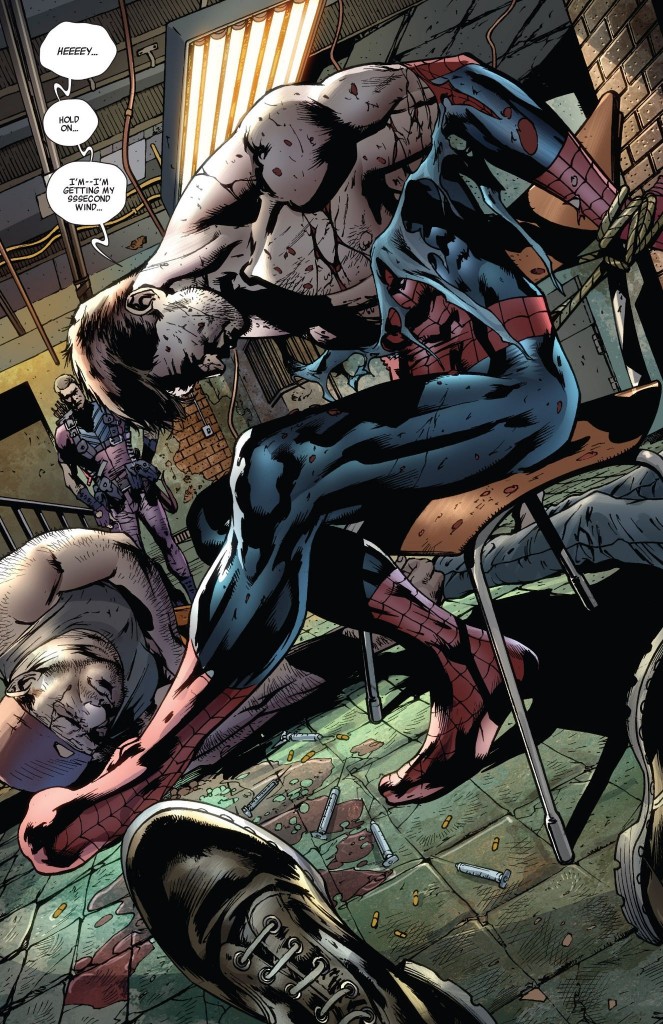 And yes, I understand that Marvel is making it very clear that the status quo change brought by Amazing Spider-Man #700/Superior Spider-Man #1 is absolutely being maintained by Age of Ultron. Yes, I’ve already read the Superior Spider-Man Age of Ultron tie-in issue #6U. THAT comic that undeniably features Otto Octavius as Spider-Man (more on that issue in another post). But I also know Peter Parker when I see him, and ladies and gentleman, when have you ever heard the Otto-ized version of Spider-Man snarkily telling Hawkeye that he loves him, after being saved from certain death. That’s a tailor-made Peter Parker line by Bendis if I ever heard one.

But beyond that one exchange between Hawkeye and Spidey, where else since the status quo switch have we seen such a vulnerable and humble interpretation of Spider-Man. Spider-Ock’s hubris and how that affects his relationships with the rest of the Marvel Universe has been one of the central themes of the Superior and Avenging Spider-Man titles. Throughout the first two AoU issues, readers get that familiar, self-deprecating gallow’s humor from Peter. The fact that Christos Gage writes Superior Spider-Man #6U so clearly in the voice of Spider-Ock, makes the contrast between the two personalities, all the more stark.

It’s very easy to explain how this kind of character confusion could have happened. Age of Ultron has taken a considerable amount of time to come together. Additionally, it would appear that the bulk of the artwork was already handed in for the series before the end of 2012. I’m sure Bendis could have gone back and re-worked some of the dialogue after Marvel threw the Spider-Man universe a major curveball at the end of last year, but I’m guessing Marvel had hoped that the interaction between Spidey and everyone else would be minimal enough that nobody would pick up on it. Then, when the whole thing was ultimately cleared-up by the Superior Spider-Man tie-in, all would be right in the Spider-Ock/Spider-Man world.

For me personally, having Peter Parker star in Age of Ultron isn’t such a terrible thing . I think every sensible comic book reader understands that Otto is not going to be Spider-Man forever (despite any of the jibber jabber from the usual suspects at Marvel), so if this mini-series goes out to be a comic book cultural touchstone in the mold of Secret Wars, Infinity Gauntlet or Civil War, it probably makes sense to feature Peter Parker as your Spider-Man rather than some trumped-up ego-maniacal version of him that would only confuse readers looking back at these comics 10-20 years from now.

As for the series itself, I have to admit that between this and Guardians of the Galaxy, I’m really starting to come around on Bendis. I know he supposedly did some tremendous things on Ultimate Spider-Man, especially in the very beginning, but I was never all that impressed with his general tone and characterizations, especially for Spider-Man within the Avengers.

Age of Ultron is one of the most despairing comic book series I’ve read from Marvel in a long time. As a result (through two issues at least, #3 is in the mail and on its way to me – fingers crossed), it’s an engrossing, gripping read that’s actually worth the hype it received. The reader is just plopped into this awful, dystopian situation with very little set-up and exposition, which is the polar opposite of what Bendis has done with a lot of his other mini-series. I enjoy reading a major Marvel event where something is actually happening, rather than people talking about something happening for five issues, and then reacting to what happened for another four.

We’ll see how much longer Peter Parker exists in this universe, but his involvement is only adding to my enjoyment. Of course as more and more people around the Internet point out this editorial oversight, I’m sure all Parker-isms will be erased from AoU before it reaches its conclusion this summer.