This is a totally unoriginal thought, but the exhibitor area at New York Comic Con is a terrible place to buy comic books. Not because there aren’t plenty of people selling comic books – I could walk two feet and find someone hawking some cherished issues of Spider-Man like Amazing Fantasy #15 and Amazing Spider-Man #1. But the problem for collectors like me is that there’s not a bargain to be found at NYCC. From what I’ve heard, exhibitor space ain’t cheap, which probably plays a role in how retailers price their wares, plus with so many people in attendance, it’s not like anyone needs to beg you to be a customer … at least, not until Sunday.

But even the Sunday rule is a bit of a fallacy. While any major con veteran will advise you that on the final day, retailers will mark down their comics so they don’t have to ship anything back to their point of origin, you’re still not guaranteed to walk away with a “steal” if you wait to do your purchasing. Granted, I saw a bunch of vendors selling comics at 50 percent off on Sunday, but what good is half off in the original listed price is twice as much as what the actual comic is worth?

As such, I had no expectations of eliminating any of the four coveted issues from my “remaining chase,” but I STILL didn’t want to walk away from my first-ever trip to NYCC completely empty-handed. So, instead I focused on some of the true albatrosses of my collection – the ASM annual issues. 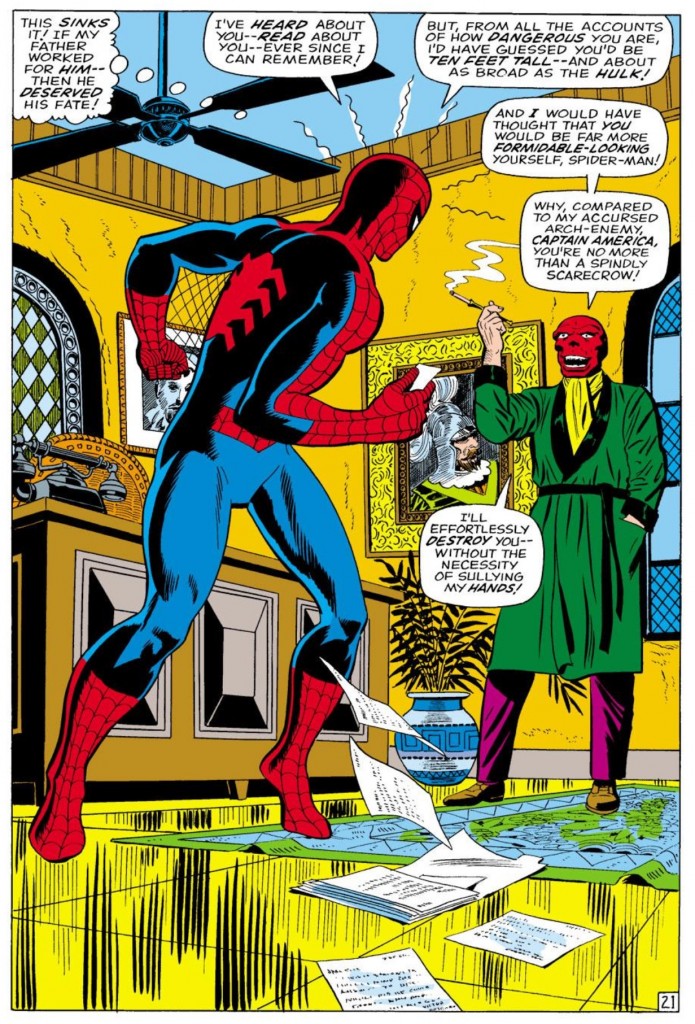 My irrational anger about ASM annuals has been duly-noted, and is a frequent point of contention between my podcast partner, Dan Gvozden, and myself, but to briefly recap: I don’t consider the annuals to be a part of my “chase” to collect every issue of Amazing Spider-Man because 1) they’re not part of the title’s numbered continuity and from a cataloguing standpoint are regarded as being a separate series; 2) when I was a home subscriber to ASM for 10 years, I NEVER received an annual which additionally reinforces my first point; and 3) while there are some fantastic annual issues, a lot of them are also reprints and it seems silly to pay decent money for unoriginal material (especially some of the annuals from the 60s and 70s where you pay a premium just because the comic is old, not because anything of significance happened in it).

Still, the angst-filled completist in me acknowledges that one day, I HAVE to own the damn annuals. If somebody were to drop the four ASM issues I am missing on my doorstep tomorrow, I will consider my “chase” complete. But once I get over the shock of such a generous gift from an anonymous stranger (I know you’re out there), my “collector” mindset would turn its focus on nabbing the last dozen or so annuals I’m missing. So, in an effort to demonstrate my ability to multi-task, I walked away from NYCC as a (somewhat) proud owner of ASM Annual’s #5, #6, #10, #11, #13 and #14.

What I find interesting about those six issues is that when grouped together, they demonstrate both legitimate “pros” and “cons” of the “should I count the annuals debate?” In my NYCC haul, there lies a hodgepodge of riveting new material that’s consequential to the Spider-Man universe, silly stories that were probably better left on the cutting room floor, and of course those dreaded reprints. There’s also the debut of a very important Spider-Man artist in one of these issues, and some appearances from some all-time great creators in a few others. So let me break down the good, the bad and the undecided of my NYCC haul.

The Good: Probably the most significant comic I picked up in terms of its consequence on the Spider-Man universe was Annual #5, which provides the origin of Peter Parker’s deceased parents. While I probably overstated the issue’s quality when I named it an “honorable mention” in my “top 10” ASM issues list earlier this year, it’s unquestionably an “important” part of the ASM library, especially for anyone who was seeking more information about Peter’s folks. 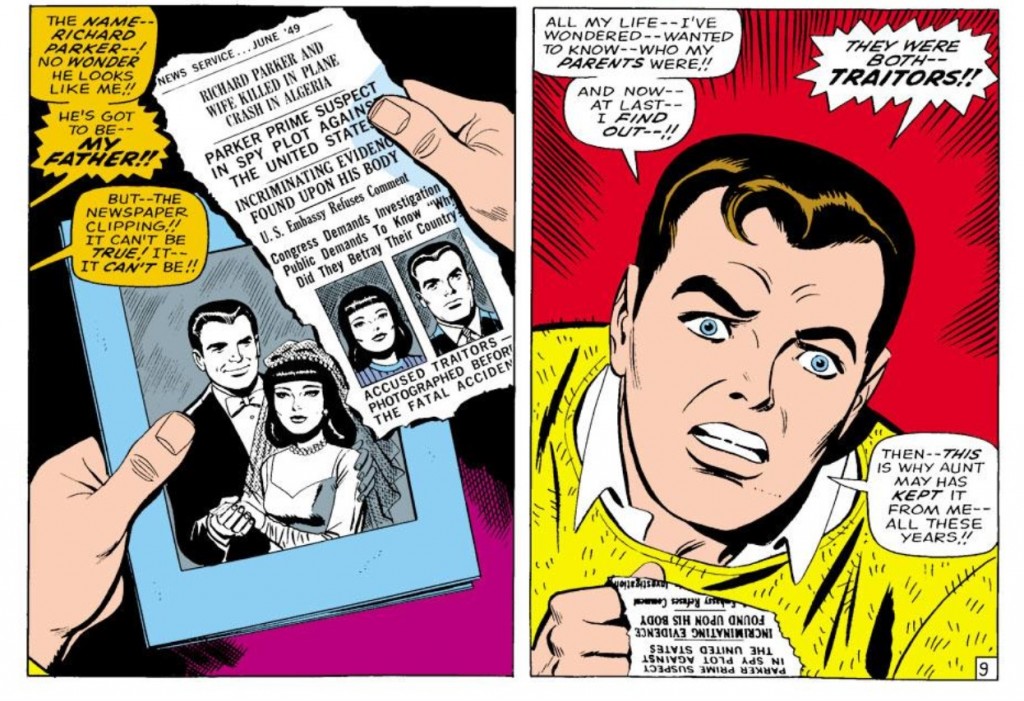 To quickly summarize, while sifting  through some old belongings, Peter finds a newspaper article that says his parents were traitorous spies against America. Peter confronts Aunt May, who confirms that she and Uncle Ben withheld this information from him because they couldn’t accept that it was true. Peter flies out to Algeria to try and vindicate his parents, and while over there, discovers that they were set-up by the Red Skull. The issue concludes with the Red Skull escaping, but not without leaving behind evidence that exonerates Peter’s parents. In a final panel that unfortunately features some rough pencils from Larry Lieber, Peter relishes the fact that it’s Spider-Man who actually helped his parents. 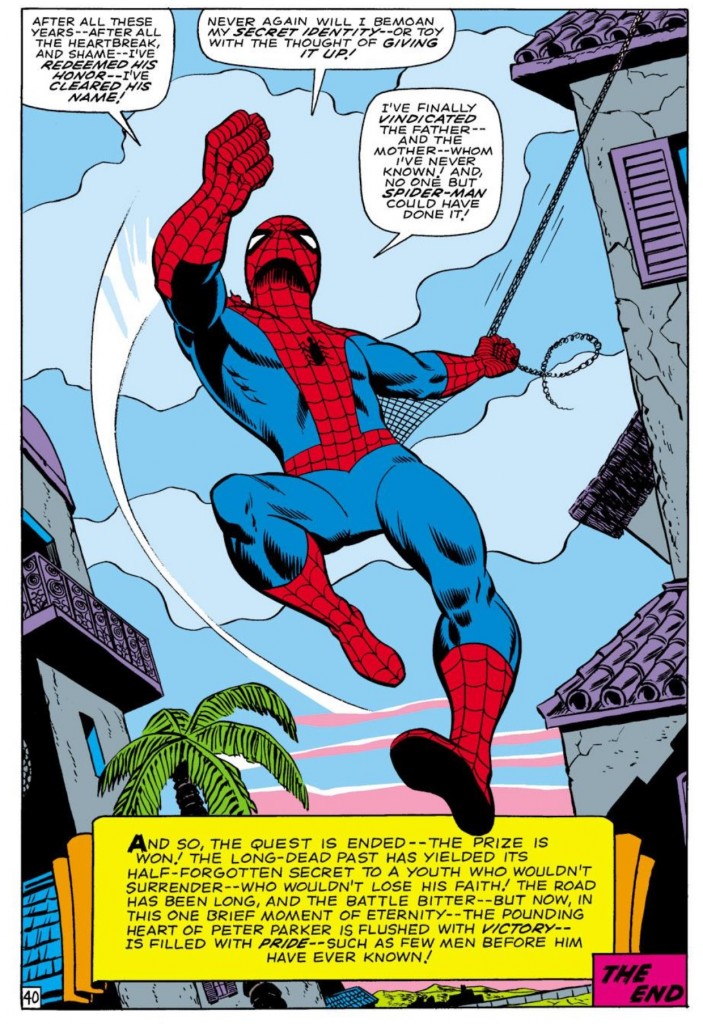 I think my personal affinity towards this story is born from the fact that it resonates emotionally – why kind of human being doesn’t want to see an orphaned hero exonerate his wrongly-accused mother and father? – plus it features the first Spider-Man/Red Skull confrontation (that I can think of). At that point, Skull was so closely associated with Captain America, that it’s still a thrill for me years later to see this unique crossover. The Red Skull’s role in framing the Parker family automatically moves him up the food chain in Spider-Man’s rogue’s gallery.

As for another good issue, ASM Annual #13 is definitely a forgotten gem – a  Spider-Man/Doctor Octopus encounter that features an off-beat script from Marv Wolfman focusing on a mysterious man who happens to know Peter is Spidey. The comic also features some brilliant John Byrne artwork during the early part of his career. At this point in Spidey history, Doc Ock is fresh off of trying to trick Aunt May into marrying him, so bringing him back into the fold is a good time. 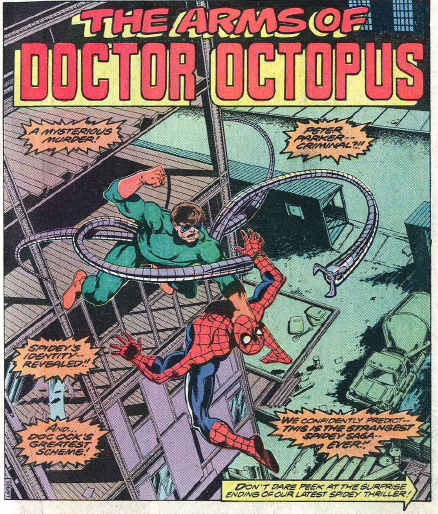 We also get to see Peter try his hand at being the world’s worst master of disguise, when he dons some stubble in order to secretly work as one of Doc Ock’s henchman a la Leonardo DiCaprio’s style in “The Departed” (spoiler alert, Peter’s disguise doesn’t work).

For my final definitively “good” annual moment, the “B” story from ASM Annual #11, “Chaos at the Coffee Bean” is a short six-pager that marks the first U.S. appearance of John Romita Jr. Given that JRJR would go on to be one of the most influential comic book artist of all-time (and responsible for some of the greatest Spider-Man moments ever), the story itself seems irrelevant. JRJR’s style is still clearly being developed, but you could definitely see the promise from the get-go. 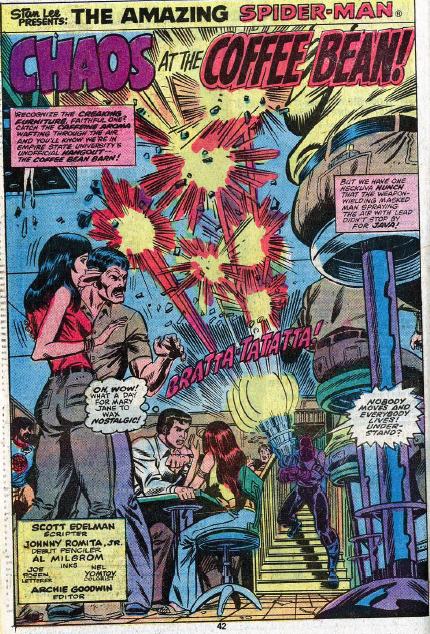 The Bad: ASM Annual #6 is exhibit A as to why I don’t consider annuals a part of my chase. The main story is a page-by-page reprint of ASM Annual #1, the first appearance of Doc Ock’s “Sinister Six.” If I want to own this story, why wouldn’t I just pick up ASM Annual #1 and/or read it as a reprint in a trade paperback or as part of the Marvel Unlimited app? And since it’s published in 1969, I get to pay Silver Age prices for a reprint. Yay!

While not nearly as frustrating as spending premium dollar for a reprint, ASM Annual #11 (the main story) is an absurd, early Bill Mantlo tale about Spider-Man fighting a couple of crooks wearing insect costumes on the set of a movie. It’s total “B” title fodder that would have been better suited being printed in an issue of Spectacular Spider-Man or Marvel Team-Up. Now, I understand that if I only included the “good” ASM stories as a part of my collection, I would probably be missing at least a quarter of the 700-issue run, but if you think like me and consider the annuals to be their own confined series, then what reason do I have to run out and buy this comic (except for the fact that I’ve already done that)? 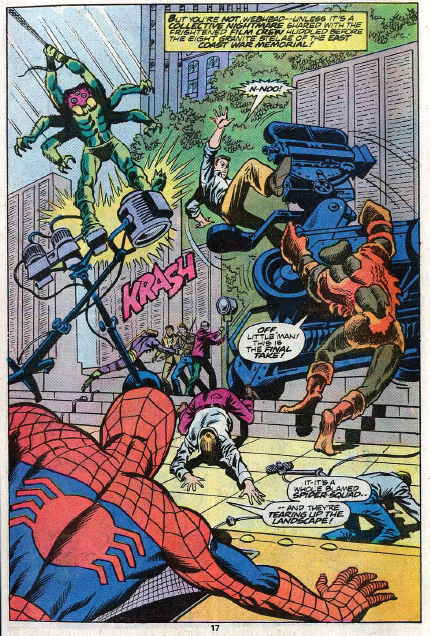 The Undecided: ASM Annual #10 marks the first appearance of a new villain, the Fly, who does end up getting some additional burn in future Spider-Man comics. Still, the Fly is a classic Bronze Age baddie in that he’s built up to be the next big thing in his first appearance, and after a few subsequent appearances, is relegated to the bottom of the pile in favor of more established villains like Doc Ock, Green Goblin and Kingpin. Plus, the Fly’s origin story is something we’ve seen at least twice before in Spider-Man history: J. Jonah Jameson inadvertently bankrolls another supervillain to take out Spider-Man. I enjoyed it more the first time with Scorpion and the Spider Slayers. Plus, it’s not like this story ever gets lumped in as an example of one of Jonah’s “sins” whenever a Spider-Man comic goes that route with Jonah (as seen here and here). 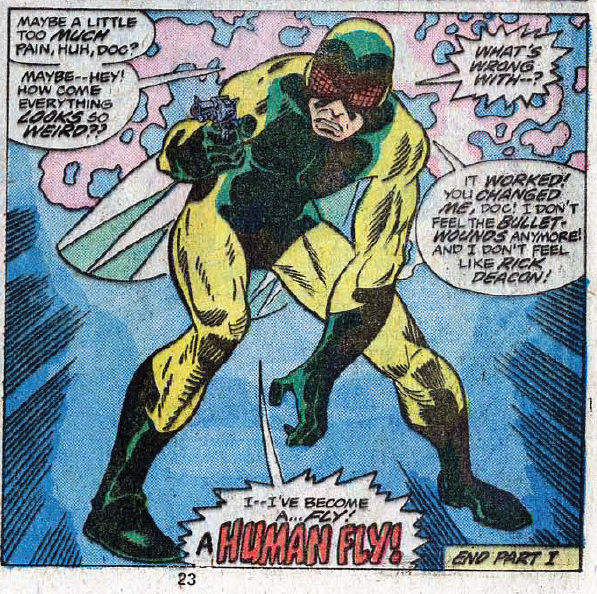 ASM Annual #14 has the makings to be a memorable Spider-Man comic, but manages to fall flat. It’s a Denny O’Neil story, which came during the era where he was scripting the main ASM series (providing a point in the column for those who say I SHOULD own the annuals) and has pencils from future Marvel superstar Frank Miller (second point). But the comic gets demerits for teasing a Spidey confrontation with classic bad-guy Doctor Doom and instead giving us Doom’s diminutive pawn Dilby. Additionally, the comic promotes a Spider-Man/Doctor Strange team-up but ends with Spider-Man freeing Strange, Strange saving the day and never explaining to Spider-Man (or the readers) exactly what he was saving everyone from. 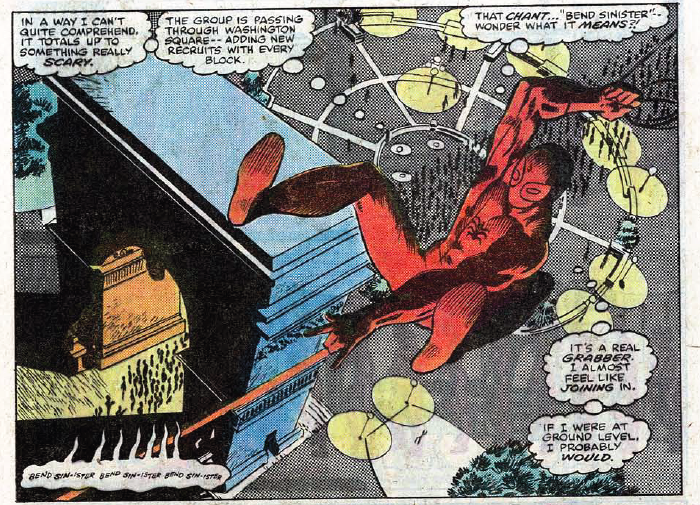 Neither are “bad” comics, but I’m hard pressed to argue that they’re compelling ones that Spider-Man fans need to read in order to get a better understanding of the character and his universe. ASM Annual #2 offers a much better Spidey/Doctor Strange story (though it also features a ton of reprints) and is probably a better bet for fans who like to see those two heroes team up. Perhaps one day I’ll even write about that annual, provided I pick it up somewhere, but don’t count on it anytime soon because as I’ve been saying: annuals don’t count (except sometimes, but sometimes isn’t enough to convince me to rush out and buy them all)!