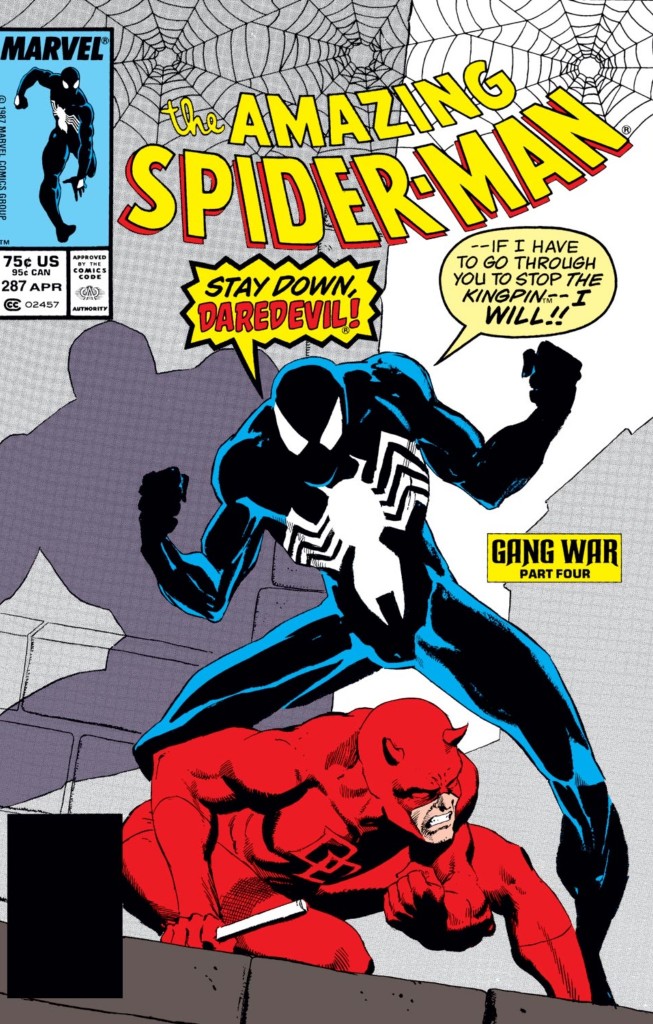 Happy Daredevil day everybody! I already wrote about a bunch of classic Spider-Man/Hornhead stories last year during Dardevil’s 50th anniversary month, but given the “Man Without Fear’s” frequent interactions with Marvel’s criminal underworld, I thought I could kill two birds with one stone and thematically link a Spidey/DD tales with my ongoing “Gangland” series (which may, or may not be ending with this post – I haven’t decided yet).

If you’re looking for a storyline that perfectly encapsulates all of Marvel’s backwards politics during the mid/late 1980s – especially as it pertains to the Spider-office – then the five-part “Gang War!” (Amazing Spider-Man #284-288) is the one for you. I’ve written about the behind-the-scenes editorial drama many times before, both on Chasing Amazing and for other sites. But for those who need a quick refresher: during the tail’s end of Jim Shooter’s controversial tenure as editor-in-chief of Marvel Comics, Amazing Spider-Man creative tandem Tom DeFalco and Ron Frenz, had a rather significant difference of opinion over the direction of the series with then-Spidey editor Jim Owsley (known today as Christopher Priest). I’ve almost always talked about these issues as they related to the identity of the Hobgoblin (DeFalco/Frenz wanted it to be Kingpin’s son, Richard Fisk, while Owsley had other ideas, and essentially sabotaged the duo from completing their reveal). But “Gang War” appears to be the actual storyline where all of the politics and back-stabbing boiled over. 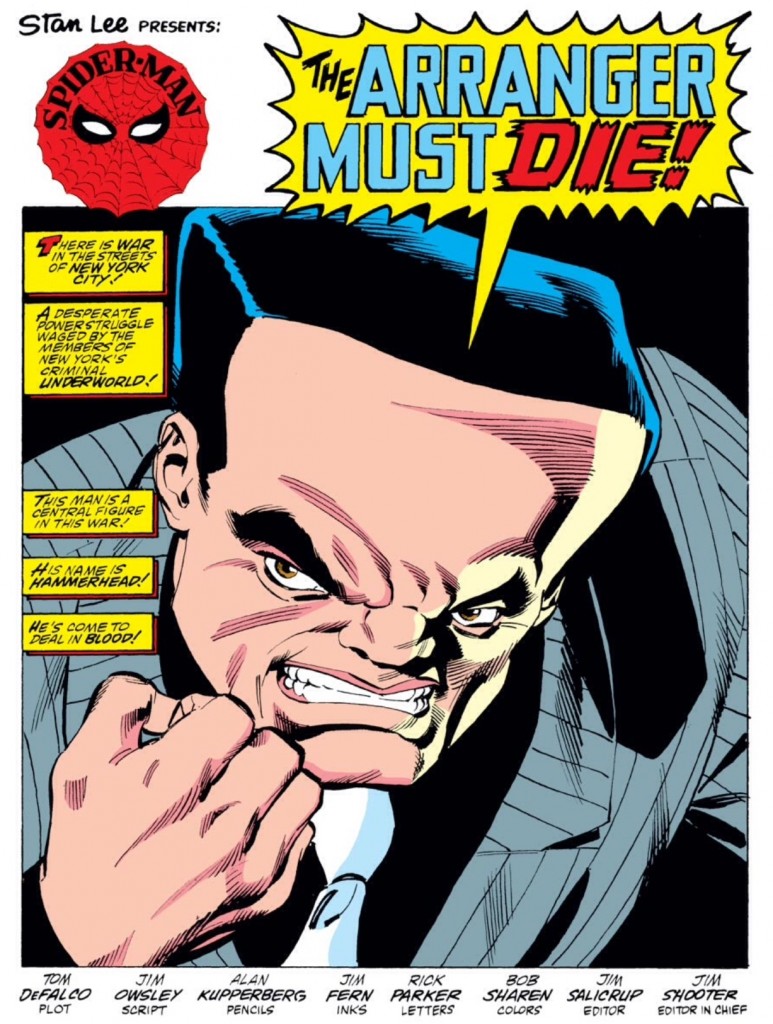 From my understanding, after one too many disagreements, Owsley “fired” DeFalco and Frenz from the book, which didn’t sit well with Shooter. As a result, Owsley was demoted and Jim Salicrup took his place as Spider-editor. Once he was out of a position of power, Owsley was tasked with scripting “Gang War,” a storyline that DeFalco had initially plotted (with Frenz providing cover art). The storyline deals with all of New York’s bigtime crooks – Hammerhead, the Rose, the terribly-named Arranger and Robo-Silvermane – making a play for Wilson Fisk’s vacated throne (this comes on the heels of his colossal failure in Daredevil’s epic “Born Again” arc). It’s up to Spider-Man to put an end to this “Gang War” but while trying, he discovers his biggest obstacles are not NYC’s mob bosses, but instead his usual allies Daredevil, Falcon and a few others.

Like a lot of Owsley’s stories from this era, there are elements of “Gang War” that are absolutely inspired and brilliantly conceived, and others that are shockingly terrible. The narrative flow and overall cohesion of the plot is unquestionably impacted by the fact that Owsley is filling in the blanks of a DeFalco/Frenz story before taking it in an entirely different direction. Owsley’s writing also suffers from a fair bit of tunnel vision, as he has certain objectives he’s trying to reach and his path to getting there is often awkward and rigid because he all but refuses to consider how other creators might have written these characters in the past.

There’s also something to be said about having a creator write what is essentially the “payoff” for a number of long-simmering plot developments that were introduced by his predecessors. We’ll never truly know what DeFalco and Frenz intended for “Gang War,” but thanks to the power of hindsight and Amazing/Superior Spider-Talk podcast interviews, we do know that the duo had very specific plans for the Rose, Hobgoblin, Ned Leeds, Flash Thompson and Roderick Kingsley. And Owsley’s take on “Gang War” goes in the complete opposite direction of what DeFalco/Frenz were building towards. Richard Fisk is exposed as the Rose (with little fanfare); Flash Thompson is sorta vindicated; we are led to believe that Ned is the Hobgoblin (though amazingly, as Peter David tells it, Owsley was going to make it the Arranger as a way to screw DeFalco, hence Ned’s death in Spider-Man vs. Wolverine. PS, DeFalco NEVER wanted Ned as the Hobgoblin and only told Owsley that to mess with him); and Kingsley, Roger Stern’s original choice for the Hobgoblin, and DeFalco/Frenz’s choice for the Rose, is introduced in this story and then completely forgotten about. 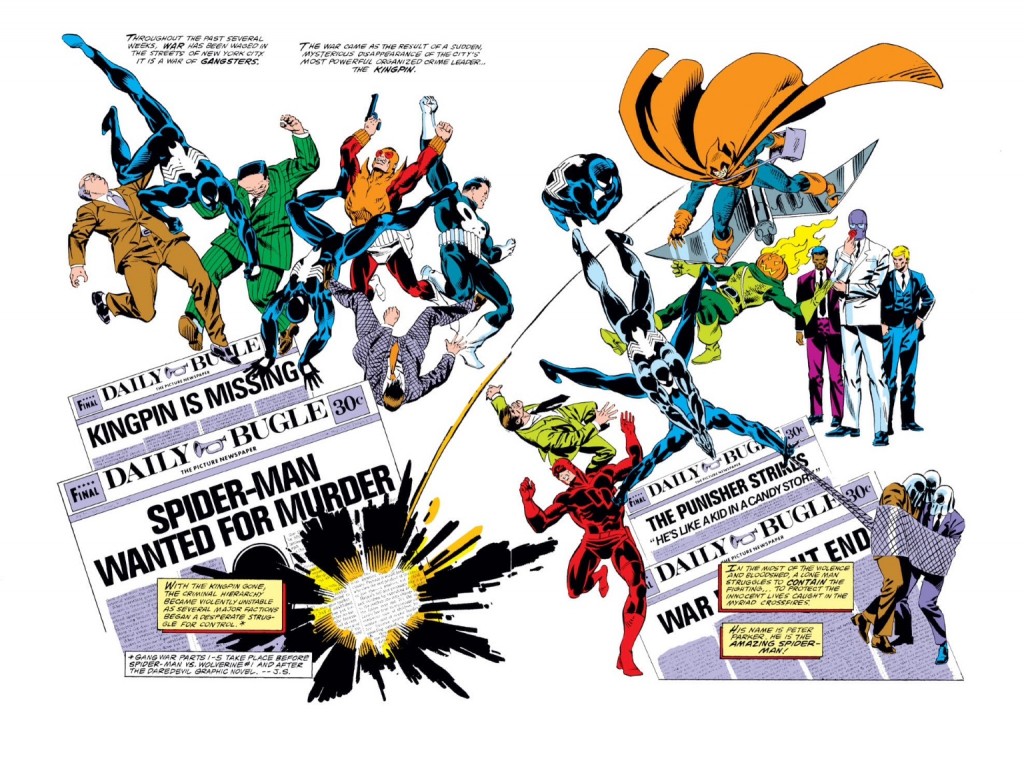 Simply put, it’s just a big confusing mess, though it’s a mess significantly aided by what we now know years later. What I actually find most troubling about “Gang War” are some of the character choices Owsley makes that are completely unrelated to the DeFalco/Frenz initiated “who is the Hobgoblin” subplot. And what I’m explicitly referring to is the Spider-Man/Daredevil dynamic.

I get that Spider-Man and Daredevil were never exactly best friends – certainly not at this point in history. Though they certainly had enough adventures with each other to not treat each other with the level of hostility and condescension as we get in “Gang War.” Owsley appeared to have a “thing” about Daredevil and Spider-Man being superhero rivals. This was first demonstrated in David’s “The Death of Jean DeWolff” arc, a storyline that continues to be celebrated by comic book fans, but one that has some serious problems in terms of characterization (in my humble opinion, of course). Owsley was reportedly a huge proponent of this storyline seeing the light of day, pushing the Spider-office for darker, edgier stories like what David had produced. That’s all well and good, but with the pen in his own hand, Owsley doubles down on the rivalry. The end result is a very unlikeable Daredevil, along with a whiny, petulant Spider-Man.

Daredevil outright lies to Spider-Man on three different occasions in this story, including one instance where he dresses up in a Kingpin fat suit in an effort to distract Spidey and create a diversion so the Kingpin could get back into town. When Spider-Man calls Daredevil out for the subterfuge, Daredevil shrugs it off and more or less tells Peter that he’s a stupid kid who doesn’t know any better and dealing with the “gang war” is a job for the adults. 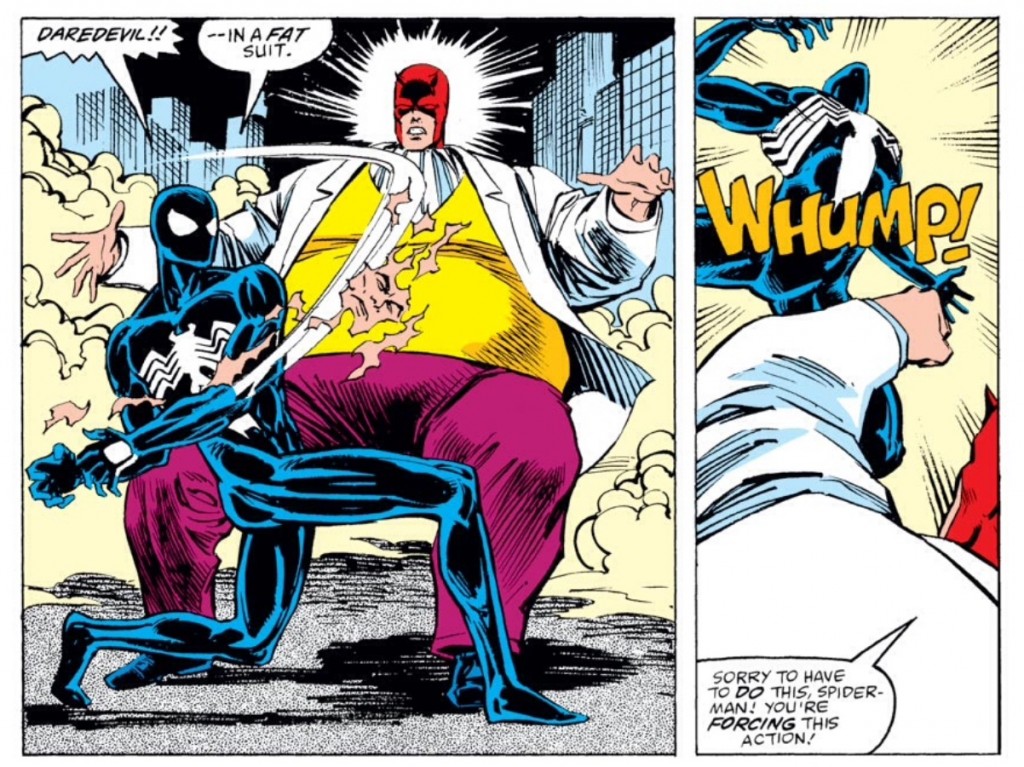 By the way, you didn’t misread that earlier sentence. Daredevil dresses in a fat suit. This is just an above and beyond stupid comic book moment both visually and narratively. Who thought this was a good idea?

Also, Daredevil calls Peter at his Aunt May’s house a bunch of times as a means to talk superhero business. I realize that these two characters revealed their secret identities to each other in “Death of Jean DeWolff,” but Hornhead definitely seems to be crossing some kind of superhero decorum line here with his behavior.

Unfortunately, it’s hard to sympathize with Spider-Man as well because each time Daredevil betrays him, he complains about it and then allows himself to get screwed over again. Apparently Daredevil telling him that he’s being serious this time is all the reassurance Spidey needs to get tricked again. It’s total Charlie Brown-with-a-football storytelling, which feels incredibly out of place in a story as dark as this one. If I were Spidey, I would have given up on DD after the fat suit incident.

The biggest shame in all of this is that Owsley actually has an interesting premise fueling the Spider-Man/Daredevil rivalry. Spider-Man is being a naïve do-gooder who is trying to single-handedly eradicate the city of all underworld crime, while Daredevil is acknowledging that the existence of the Kingpin is a necessary evil for keeping some semblance of non-violent (or less violent) order in New York. Of course, Daredevil’s position would make far more sense if “Gang War” wasn’t published in the immediate aftermath of “Born Again,” where Kingpin attempts to destroy every aspect of Matt Murdock’s professional and personal life. But this idea of Kingpin being a stabilizing force is a rather sophisticated idea that allows the reader to consider the importance of some of the world’s less flattering elements. 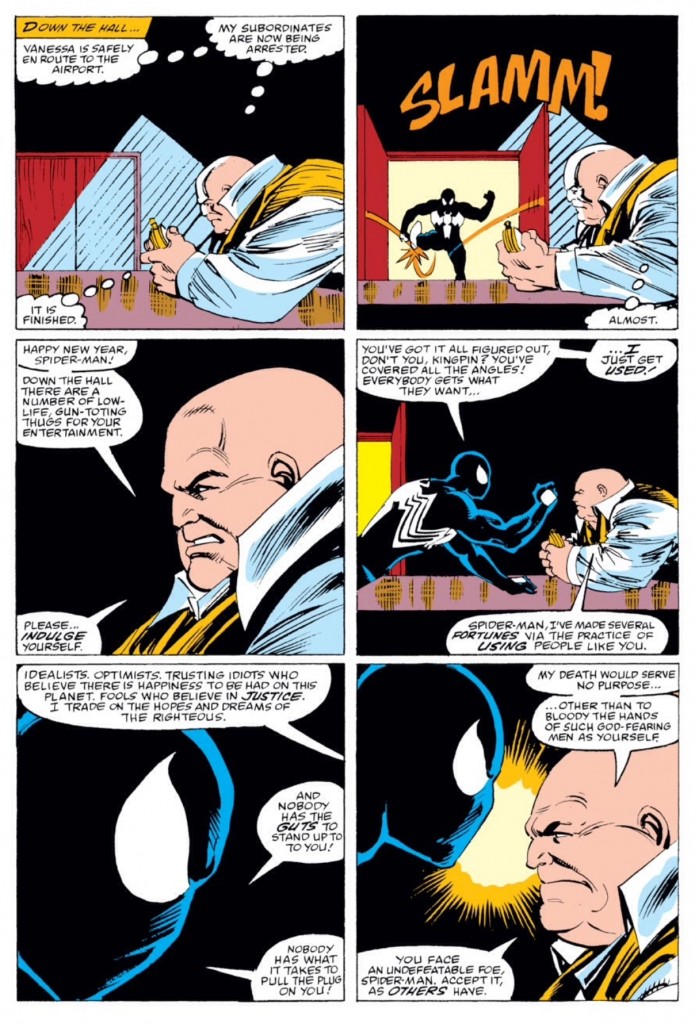 The Kingpin subplot also leads to a rather riveting showdown between Spidey and Fish in “Gang War’s” final chapter. After being tricked by Daredevil for the umpteenth time, Spidey deduces that Kingpin faked having his top henchmen murdered as part of a deal with the federal government. Thinking the Kingpin betrayed them, his goons would flip some useful information to the feds, while Fisk was protected from prosecution and able to take back control of the underworld. It’s a tad convoluted, but given the corruption of our legal system, believeable all the same. Spider-Man calls Kingpin out for it and promises that one day, Fisk will slip and he’ll be there to take him down. And Kingpin laughs because … the system is corrupt, and there’s nothing anyone – Spider-Man or otherwise – can do about it.

A total downer of an ending, but it seems to set the stage for Spider-Man and Kingpin to be chief adversaries again (as they were in the Silver Age). Of course after next issue, the famed Hobgoblin reveal, Spidey and Kingpin don’t have a ton of interaction going forward. Meanwhile Spider-Man and Daredevil are officially on the outs thanks to Owsley’s writing, though I’m trying to remember if future creators even referenced this story whenever the two heroes were paired off in the future.

Funny thing is, disregarding this story, I actually think there’s a lot of potential for Marvel to have Spider-Man and Daredevil interacting in a movie or television series. In a perfect world, a Spidey Netflix show could tie-in perfectly with this street level Defenders shtick Marvel Studios is building towards. The series could explore Spidey and Daredevil’s varying levels of idealism and acceptance of “the system.” But alas, Spider-Man is destined to be a movie star, as the right film will make hundreds of millions of dollars for Sony/Marvel.