It’s probably a given that someone who calls himself a Spider-Man fan should have a real affinity for Spider-Man and his alter ego, Peter Parker. But beyond the superheroics of the “Web Slinger,” one of the biggest things about this comic book universe that has kept me hooked for more than 25 years is the supporting cast. In fact, I would argue that Spider-Man has the “best” supporting cast in terms of diverse, interesting characters who do not have the benefit of powers, in the entire Marvel universe.

And J. Jonah Jameson may be the best of the best when it comes to the supporting cast. The editor-in-chief turned publisher of the Daily Bugle (and now Mayor of New York City) was Spider-Man’s first major antagonist, using the power of the press as a means to turn public perception against the Wall Crawler. He’s financed numerous supervillains, including the Scorpion and the Smythe family in an effort to disable, capture and/or kill Spider-Man. And yet, there’s also a true human quality to Jonah that grabs you as a reader. Was there any one who didn’t feel sympathy for JJJ when his wife Marla was killed by one of the villains he helped finance?

Over the years, Jonah has made a number of cameos outside the Spider-Man universe, but as part of my celebration of the 50th anniversaries of the X-Men and Avengers in September, I thought it was worthwhile to examine two polarizing character portrayals of Jameson through the lenses of these two series: Uncanny X-Men #346 by Scott Lobdell and Joe Maduriera, and New Avengers #15 by Brian Michael Bendis and Frank Cho. Personally, I think one is a truer portrayal of Jonah’s character than the other, but I think both offer insights into what makes JJJ such a fascinating character to read about even for non-Spider-Man fans. 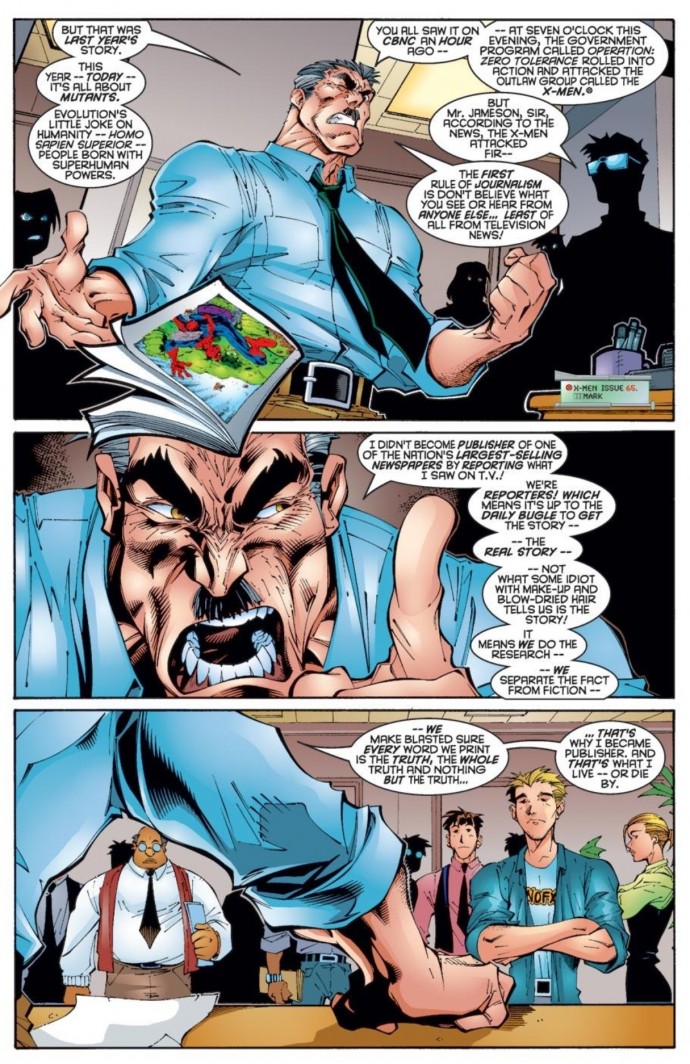 I’m guessing a person’s opinion on how Jameson is characterized in Uncanny X-Men #346 boils down to whether or not you think JJJ is capable of being a principled journalist who values truth over sensationalism. At first blush, Jameson has been pretty trashy in a NYC tabloid kind of way, but he’s also had moments where he demonstrated great integrity. JJJ protecting his city editor Joe “Robbie” Robertson from a racist pig like Sam Bullit in Amazing Spider-Man #92 despite the fact that Bullit was running on an anti-Spider-Man platform is certainly one instance where Jameson was acting like a serious journalist. If you’re a Daredevil reader, you could probably also praise Jameson for giving free reign to his ace reporter Ben Urich in his journalistic crusade against Wilson Fisk, aka the Kingpin of Crime.

Uncanny #346 is another one of those instances where Jameson flies the flag of good journalism loud and proud. In this issue – which reads more like a Spider-Man comic than an X-Men book because the “A” story is actually a Spider-Man/Marrow confrontation-turned-team-up – Jameson is approached by the mysterious Bastion, a proponent of “Operation: Zero Tolerance,” a government program that called on hunting down and capturing/killing all mutants. Given Jameson’s long-standing issue with costumed “vigilantes,” one would think that JJJ would immediately side with Bastion and support his cause through the front/editorial pages of the Bugle. Instead, Jameson thinks something about Bastion “stinks like yesterday’s garbage,” and calls on his Bugle staff to investigate him.

In one of Jonah’s most powerful scenes ever, Bastion offers the publisher a CD-ROM (oh 1997 … how we miss you and your technology) with personal information about all of the X-Men on it, in exchange for some favorable coverage of Operation: Zero Tolerance. Jameson dismisses the offer (or extortion) and destroys the CD. As somebody who worked five years as a newspaper reporter, if I was working for the Daily Bugle and I saw my publisher speak truth to power like Jonah does to Bastion here, I would have done or said anything for JJJ going forward, because I would have realized that despite his eccentricities, he’s a man of deeply-rooted principles. 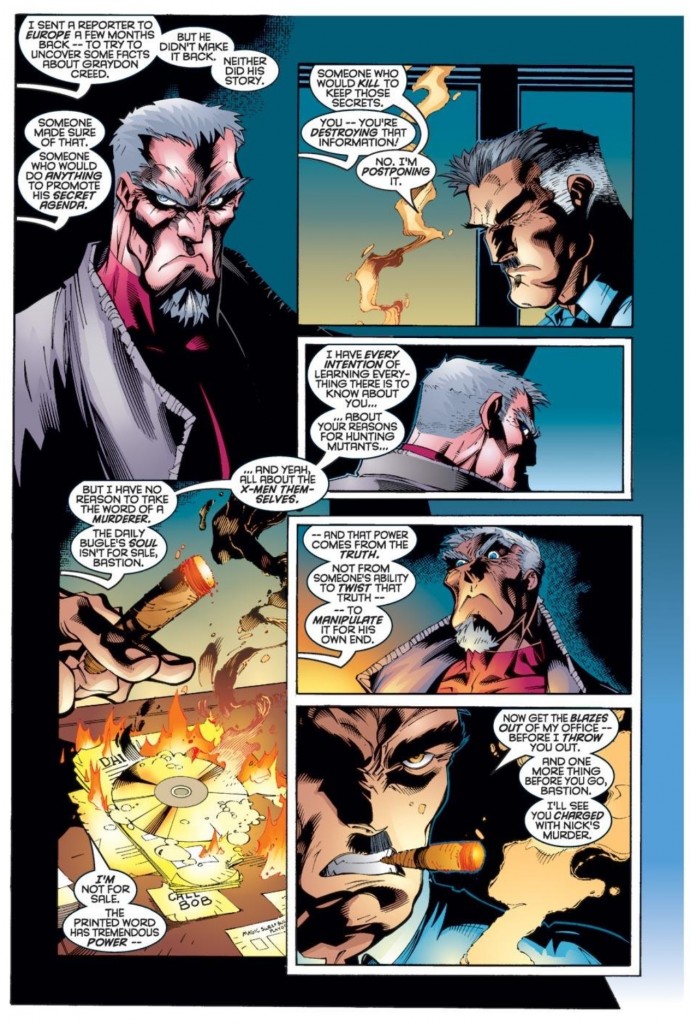 But is Uncanny #346 the true Jonah? Because throughout his career, Jonah has embarrassed himself or the institution of journalism a number of times. Funding and hiring a murderer like the Scorpion is bad enough to permanently delegitimize Jonah (I still think him resigning as editor but staying on as publisher in Amazing Spider-Man #251 after owning up to this crime was a total farce). And there’s still plenty of other occasions where JJJ has acted in underhanded fashion, all because of his unhealthy obsession with Spider-Man.

New Avengers #15 features that Jonah – the narcissistic, unreasonable version of him. This comic is notable because it’s the first time the new team goes “public” after first assembling during the notable “Breakout” arc. As the team is readying itself for this big moment, Spider-Man believes his poor reputation, specifically with the media, is likely going to be a liability for “Earth’s Mightiest Heroes.” The senior member of the Avengers, like Iron Man and Captain America, assure Spidey that won’t be the case.  Stark then invites Jonah up into Avengers mansion, and tries to broker a deal that the superteam will provide the Bugle with “access” in exchange for him calling off the dogs vis a vis Spider-Man.

What follows next is a moment that must be seen to be believed – Jonah and Spidey shake hands. It’s like when Macho Man Randy Savage and Hulk Hogan joined forces as the “Mega Powers” against the evil Ted DiBiase. 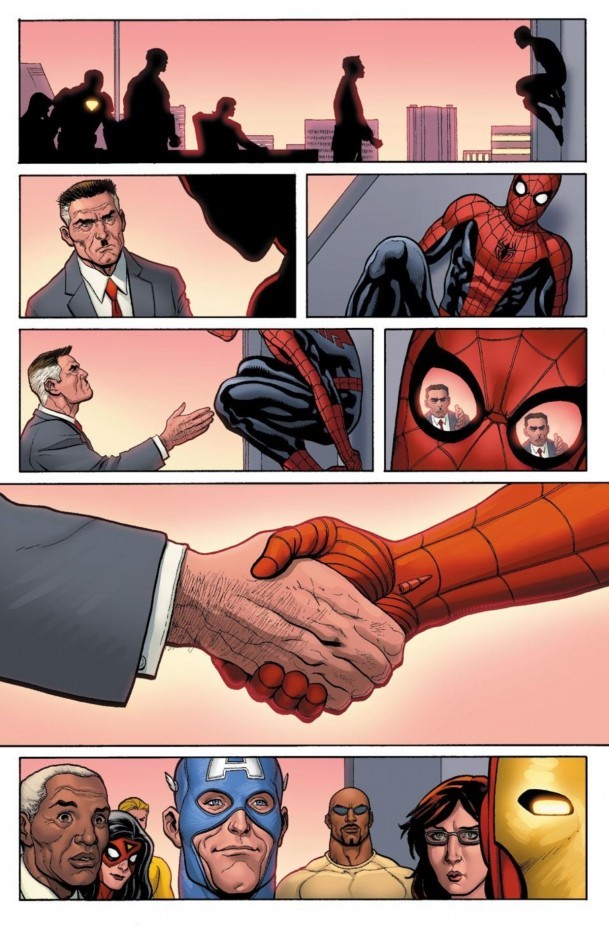 In all seriousness, this is a pretty impressive moment. I’m a little disappointed that it took place in an Avengers book rather than a Spider-Man one.

The problem is, this version of Jonah doesn’t have any integrity. Despite the handshake heard ‘round the world, Jonah slams the new Avengers team, ridiculing them as a bunch of deadbeats and alleged murderers. In truth, Jonah doesn’t say anything technically “untrue” in his editorial, but it’s such a betrayal of trust (what are back room agreements between the press and billionaires like Stark for anyway?) that it’s almost impossible to reconcile the fact that New Avengers #15 Jonah an Uncanny #346 are the same person. 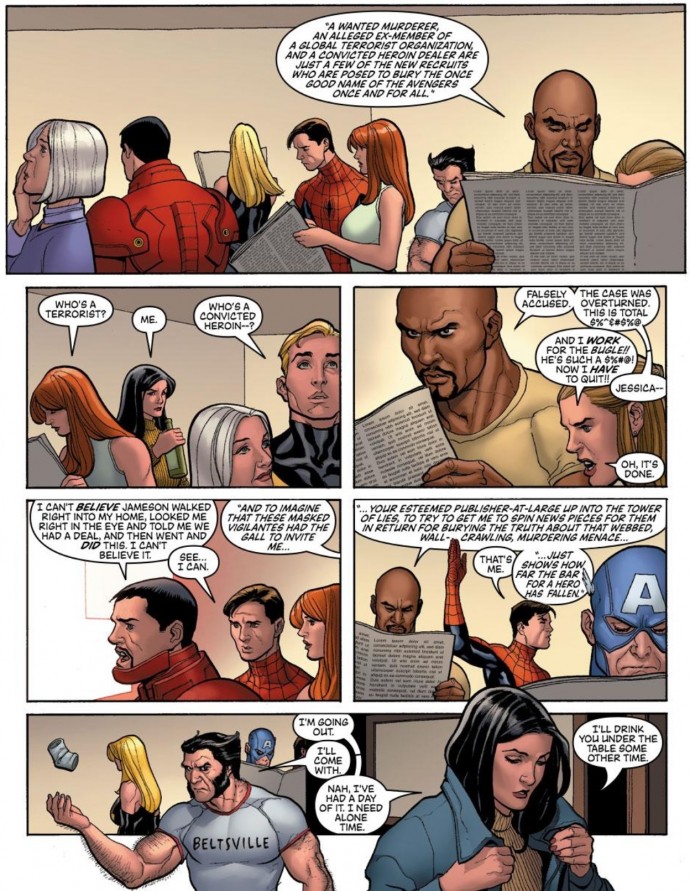 In both instances, Jonah stuck to his principles in that a person/persons attempted to buy favorable coverage for their respective causes either through information and/or access. Despite the fact that we readers know the Avengers are “good” guys, they attempted to push Jonah down a very slippery slope for a member of the media. Once you start accepting “exclusives” in exchange for positive coverage, you lose integrity as a news organization. All the time we want to call out the media for its bias. Imagine the hellstorm that would erupt today if we knew unequivocally that a media organization had brokered a deal with a politician?

For me, my bigger problem with Jonah in New Avengers #15 is the handshake. Because of his integrity, because of his principles, I could never see him agreeing to a deal with the Avengers and then squelching on that arrangement the very first chance he had. Instead, I imagine once Tony started talking terms with him, Jonah would have left the building, screaming about what bunch of hypocrites the Avengers were. Bendis and Cho were clearly going for a more comedic reveal with Jameson, but after years of reading about JJJ, I just can’t envision a situation where Jonah goes back on this word.

But that’s the great thing about Jameson. There are so many great stories with him to choose from, you could probably make any argument you want about him and his character. The important thing is that there’s baseline consistency in characterization, which in the cases of Uncanny #346 and New Avengers #15 is the case.