Reader Request month 2014 edition is in its penultimate week so we’ll be rifling through some of these as time allows. For our next installment, I I took a request from Chasing Amazing/Amazing Spider-Talk superfan, Thomas Aiello who, via my site’s Facebook page, recommended Amazing Spider-Man #187 by Marv Wolfman, Jim Starlin and Bob Mcleod.

Thanks again to Tom for his continued support of the site and our podcast. 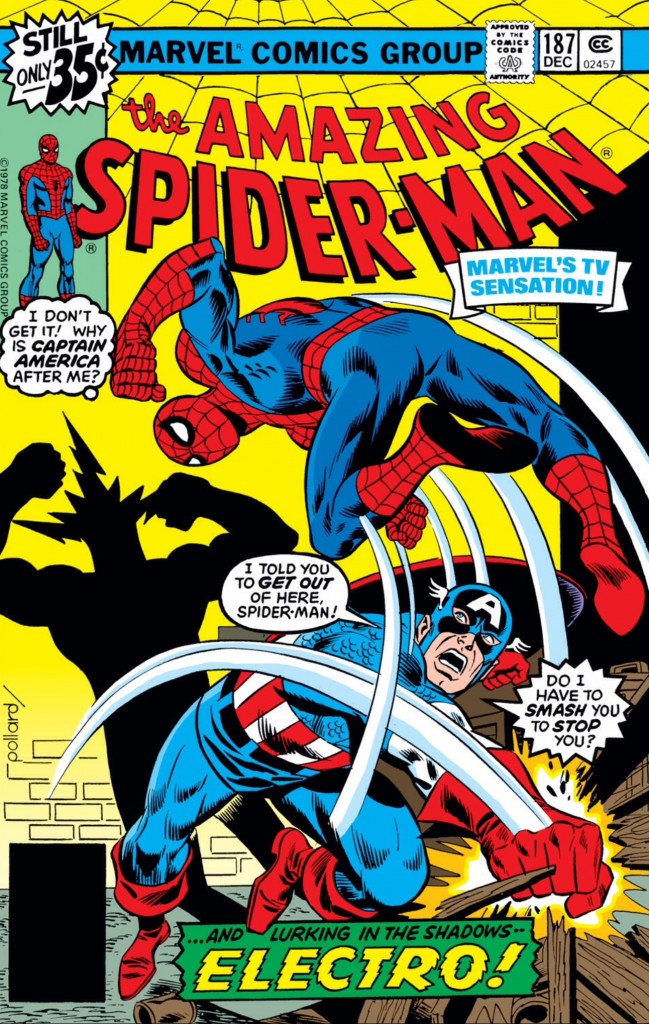 Every time I think of Amazing Spider-Man #187, this weird little bit of sense memory comes over me regarding Spidey’s relationship with the book’s guest star, Captain America. Keith Pollard’s cover depicts Spider-Man and Cap getting into a fight over something with a silhouette of Electro in the background. What could these two heroes possibly be fighting over? I guess that’s why we’re supposed to pick up the comic, right?

I can’t help but conflate ASM #187’s imagery with another, completely unrelated comic, that just so happenes to be one of the very first comics I ever purchased as a young child. In the past, I’ve talked with frequency about some of my earliest ASM purchases, specifically issues #296 and #297, which I picked up at the same candy store/newsstand down the street from where I grew up on Long Island. But a few months later, I made another key purchase – Spectacular Spider-Man #138, my first ever non Amazing issue of Spider-Man. And on that front cover is an image of Captain America (and Tarantula) fighting Spider-Man. What could possibly have come over Captain America to align himself with a bad guy like Tarantula and attack Spidey? I guess that’s why we’re supposed to pick up and read the comic, right? 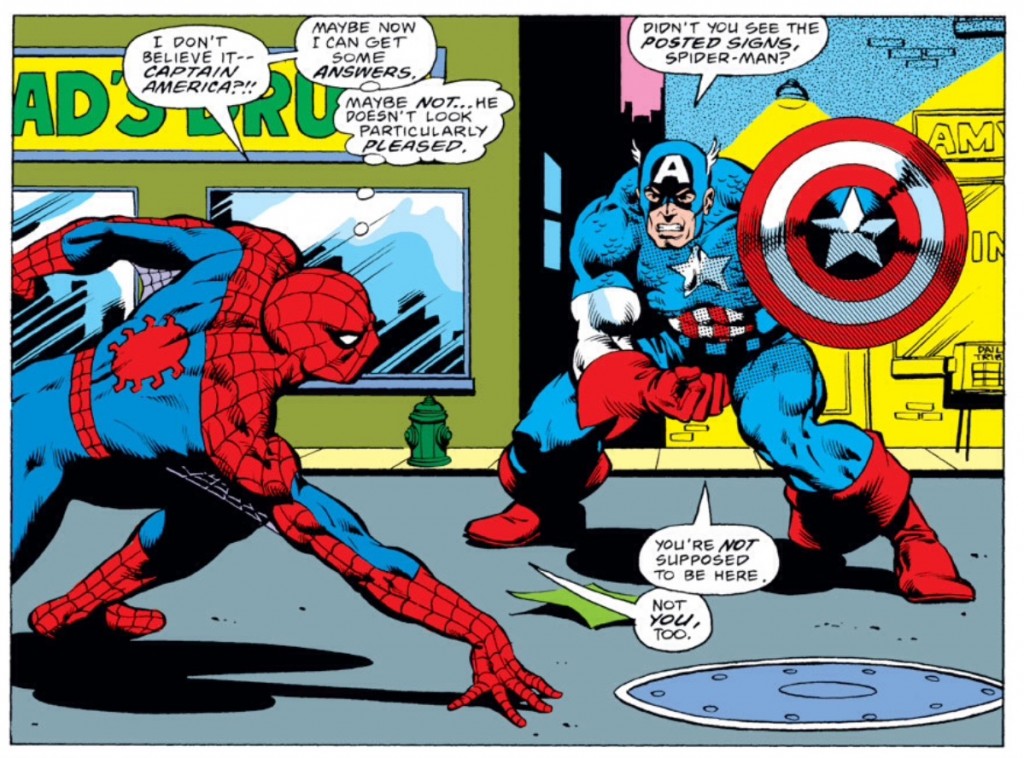 What are the odds that there are two Spider-Man comics, separated by at least a decade in time, which show Spider-Man and Captain America fighting each other on the cover? Of course, this being Marvel, the universe of complex heroes who don’t always get along with each other (you can ask the X-Men and Avengers about that), it’s actually not the least bit unusual to depict two good guys duking it out on the cover in order to sell a comic. And in the case of Spectacular #138, the Cap in question is actually John Walker, aka, US Agent, not the original Red, White and Blue Avenger, Steve Rogers. But because of my early history with Spectacular #138, I have long maintained the idea that Cap and Spidey REALLY don’t get along with each other (however untrue that actually is). And when years later, I found myself rifling through a back issue box of ASM’s and I stumbled upon issue #187, the opinions of my 7-year-old-self were seemingly verified.

Fortunately, as I’ve gotten older, I’ve learned the valuable lesson of not judging a book by its cover, thereby eliminating my Pavlovian inability to embrace Captain America because as a child I perceived him to be a big bully to my favorite superhero. ASM #187 does depict a minor scuffle between Cap and Spider-Man (as the cover indicates), but it’s not because Rogers has turned his back on his ideals and become a villain. Instead, he does it in an attempt to “rescue” Spider-Man from a larger threat. Unfortunately, because he’s being so secretive about it, the reader is left wondering for about three-quarters of the issue about what exactly is making Captain America so darn cryptic. 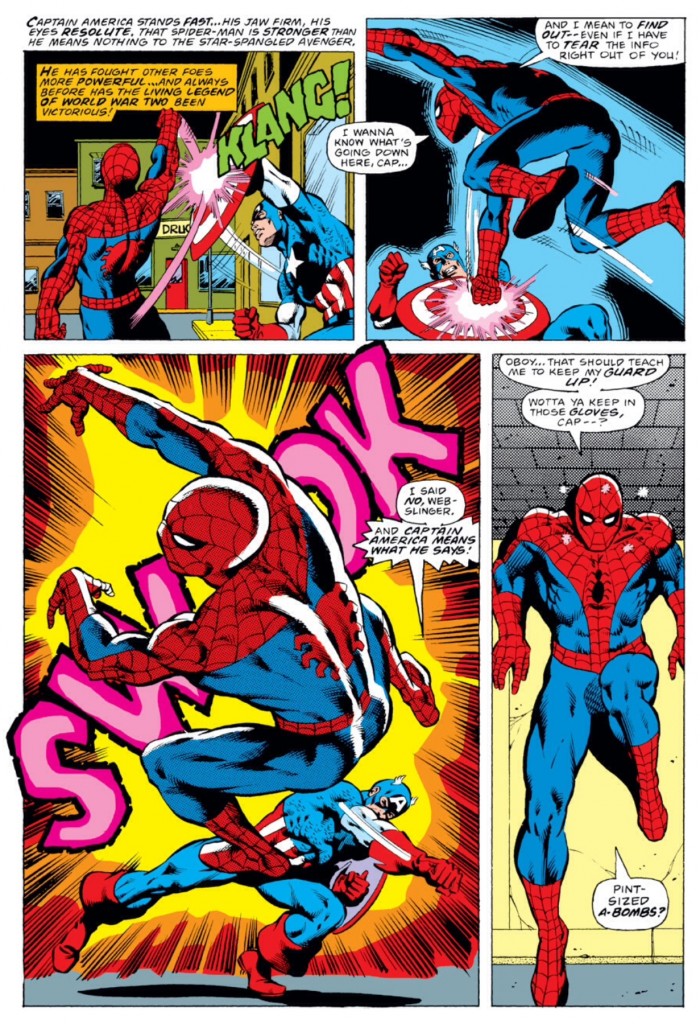 In a twist that feels just plain odd for a superhero comic book in the late 1970s, Cap is guarding a power plant where a young boy is being held hostage by Electro (hold on a second, a supervillain kidnapping ak is not the odd twist). As it turns out, the kid has a form of the plague (now THERE’S your odd twist), and by being at the scene, Spidey has potentially exposed himself to the disease.

Now that’s just a plot development that makes me wonder when the Marvel Universe hit the reset button and traveled back in time to the Middle Ages of Europe. Who gets the plague? Was there some sort of real-world epidemic in 1978 that this story was inspired by? If so, this is not a part of American history I’m the least bit familiar with, so I’d love for someone to educate me. 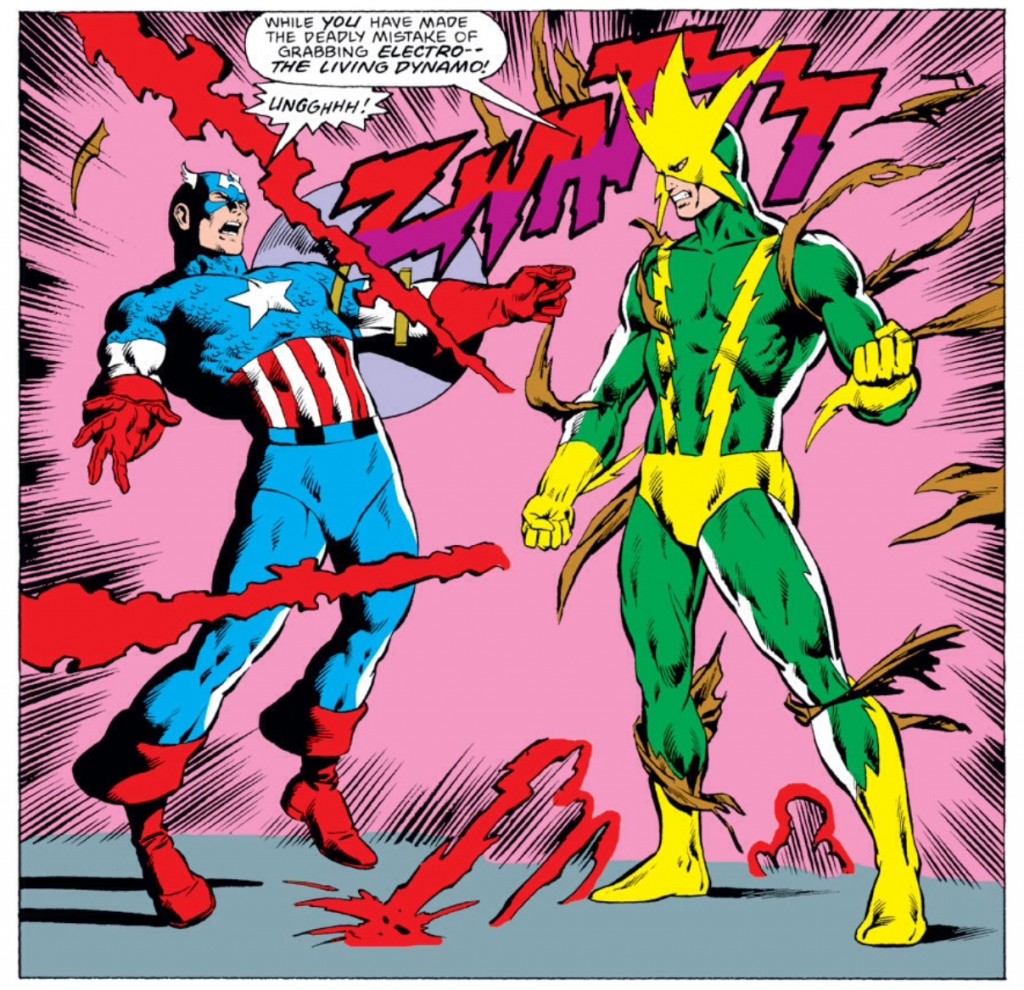 Anyway, all is forgiven for Spidey when he teams up with Cap and helps him defeat Electro (with relative ease mind you – this was still the point in history where poor ol’ Max Dillon was more punchline than force of nature). And just to emphasize how high the stakes actually are, Spidey gets an inoculation for the plague and S.H.I.E.L.D. let’s everyone know that the little kid with the disease is going to be just fine “in a few weeks.”

Adding to this comic’s somewhat curious ending, there’s a final text box that almost makes it sound like the storyline is being continued in the next issue. While there’s undoubtedly a dangling thread as to why Electro wanted to shut down the power grid in New York City by attacking a power plant, Amazing Spider-Man #188 is connected very very loosely to the preceding issue. So it’s really not a two-part story as much as ASM #188 addresses a peripheral subplot in ASM #187. 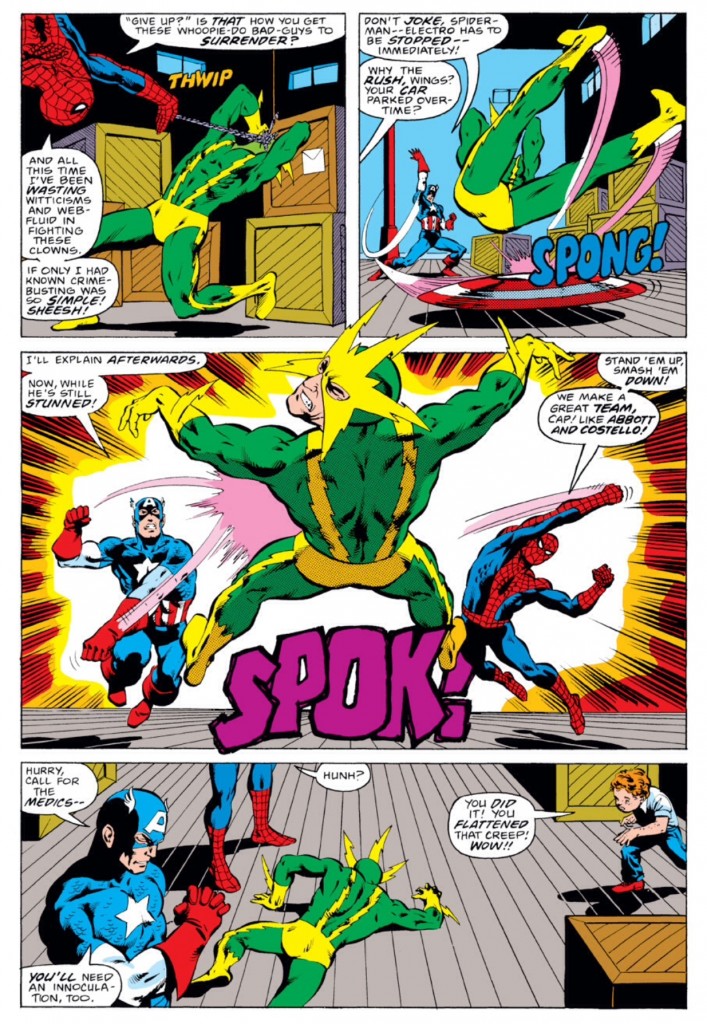 If it sounds like I’m going down a bit too hard on this comic, I apologize (sorry Tom!). Though I think there is a perfectly reasonable explanation as to its odd plotting and sequencing. While Marv Wolfman gets a scripting credit for this issue, Jim Starlin – taking a break from creating the Marvel Cosmicverse that we know and love today I guess – gets a rare co-plot and pencil credit for the comic.

I’m actually a huge Starlin nut and think his work on Warlock and Captain Marvel is some of the very best Marvel comics from this era. But when Starlin wasn’t working on those characters, he was notoriously filling in for other creators who was at risk of missing a deadline. Clearly Starlin jumped in to finish a half-completed Wolfman issue (it’s worth noting that Wolfman goes back to getting sole credit for the script in ASM #188).

At the very least, this little factoid answers a question that’s been bugging me for a couple of years now – why was Starlin’s name included in that ASM #700 skyline variant that featured every writer, penciller and inker that ever worked on an issue of Amazing Spider-Man? Starlin gets a credit for “contributing artwork” to a couple of Gerry Conway issues in the early 70s, but clearly ASM #187 is his one bonafide credit on the series. Makes that signature of his on my ASM #700 seem all the more worth it now!