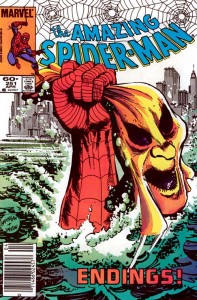 Lo, there shall be an ending!

After spending my entire summer writing about the “Original Hobgoblin Saga” in full, I have reached Amazing Spider-Man #251, the final chapter in the story that was originally introduced by Roger Stern in ASM #238 and then fleshed out over the course of eight comics. Of course, this isn’t the last appearance of the Hobgoblin by a long shot. By the end of this issue, we STILL don’t know WHO the Hobgoblin is, and there are a good handful of comics that came out the following three years that teased that question. But there is also a certain finality to how ASM #251 reads that mark the end of this story’s chapter. From this point on, the Hobgoblin’s characterization changes from a methodically homicidal criminal genius to a violently chaotic loose cannon. And of course there’s the matter as to who Marvel decided to reveal as the Hobgoblin.

But that’s not what we’re here to discuss today.

If someone were to ask me why the “Original Hobgoblin Saga” is such an important story in Spider-Man history (and one of my personal favorites), a big part of that conversation would focus on ASM #251. It’s unquestionably an action movie in comic book form, but in a way that doesn’t feel empty and frivolous. There’s explosions, elaborate fight sequences, and implausible scenarios that bend even the most secure suspensions of disbelief. But after seven issues of the Hobgoblin elevating the tension in Spider-Man’s life every time he appears on a page, the excesses of ASM #251 feel so appropriate that you can’t help but forgive them.

So that includes Spider-Man somehow surviving being on the front of an indestructible van that has just plowed through a huge window and a brick wall.

It also includes Spider-Man regaining his lost Spider Sense by getting the mother of all uppercuts from the Hobgoblin. 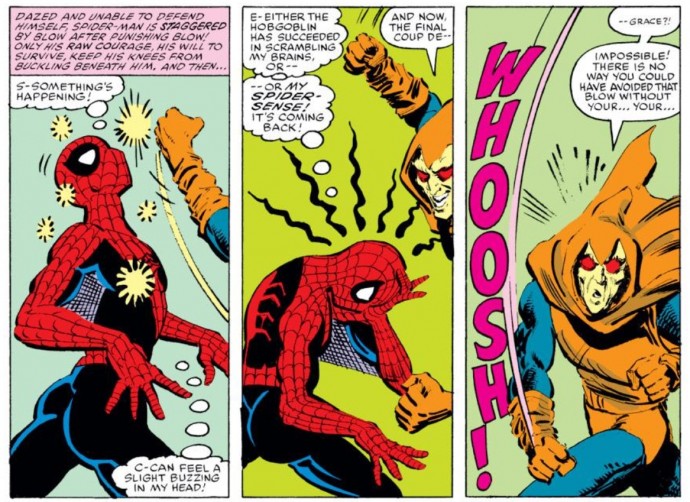 And it of course includes the comic’s ending, which shows Spider-Man surviving an underwater explosion (and presumably the Hobgoblin survives too – which at least Spidey is smart enough to acknowledge). 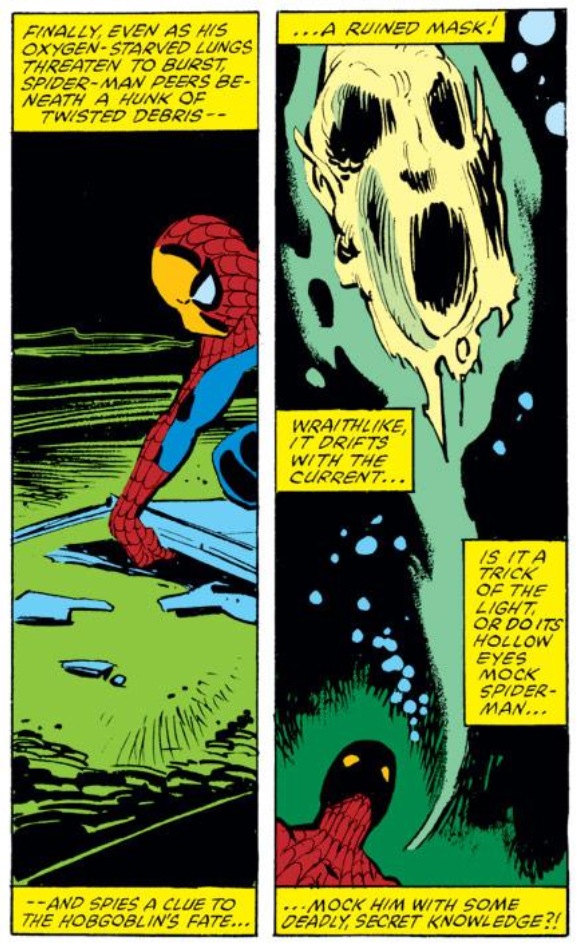 I’ve tossed around the word “epic” a few dozen times during my lookback at the “Original Hobgoblin Saga,” in large part because I didn’t feel like consulting a thesaurus to come up with new words that all essentially mean the same thing. That’s because this is an “epic” storyline, and epic storylines warrant epic endings. ASM #251 is the ending this storyline needs and deserves.

When I compiled a “top 10” list of my all-time favorite Spider-Man “battles” for Longbox Graveyard earlier this year, the Spider-Man/Hobgoblin throwdown from this issue placed on the list, and for good reason. Writer Tom DeFalco expertly uses a theme/device mastered by Stern in his famous “Nothing Can Stop the Juggernaut” arc a few years earlier: the idea of Spider-Man as the eternal underdog, who never quits, never says die and is always willing to sacrifice himself, despite his better judgment, to save the day.

I can’t help but smile every time I think about all the aforementioned silliness pertaining to the sheer number of pratfalls DeFalco writes for Spidey during his battle with the Hobgoblin. When he emerges from the wreckage of the broken storefront window and brick wall, I breathe a sigh of relief. When that one punch brings back the Spider Sense, I cheer with sincerity. And when Spidey manages to escape the underwater wreckage from the Goblin-Mobile crash, I feel for the first time since the Hobgoblin has been introduced that the hero has scored a decisive victory against his adversary.

It’s the one element of the “Original Hobgoblin Saga” that’s been missing – that definitive “Spider-Man is a superhero” moment. In their first encounter in ASM #239, the Hobgoblin escapes before things can escalate because he doesn’t think he’s ready to take on Spider-Man. Sure, the Hobgoblin was on the run, but even Spidey is unsatisfied with the results. In ASM #244-245, the man under the Hobgoblin mask was a dupe brainwashed by the villain to take the fall in case he was apprehended (and Lefty Donovan eventually pays an even bigger price). In Spectacular Spider-Man #85, Spidey has a chance to nail the Hobgoblin but the Black Cat, desperate to be his partner, gets in the way and needs rescuing.

After all the near-misses and borderline failures of Spider-Man, he desperately needs this victory in clear and indisputable fashion, and I think DeFalco knows this. In many ways, ASM #251 parallels a classic comic from the Stan Lee/John Romita Sr.-era, ASM #40, aka, “Spider-Man Saves the Day.” The front cover image of Spider-Man FINALLY standing triumphant over the Green Goblin, who’s tormented him and even successfully unmasked him, remains a favorite of mine to this day.  Sure, in ASM #251 there’s still the question as to whether or not the Hobgoblin survived the crash at the end of this issue (is there really any doubt?) just as how Norman Osborn does survive his battle with Spider-Man in ASM #40 and is allowed to continue as if nothing ever happened because he has “amnesia.” But in both cases, Spider-Man finally got the better of this formidable opponent. 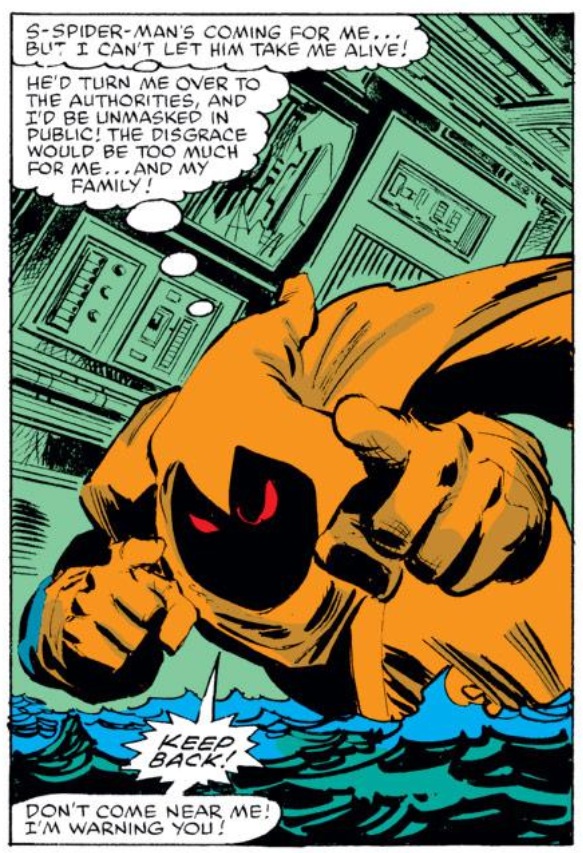 And despite this issue marking the end of what is essentially another man’s work of fiction, DeFalco immediately starts to put his own stamp on the Hobgoblin character. There’s one scene during his battle with Spider-Man where the Hobgoblin starts to question his own sanity, dismissing it by claiming it was Osborn who was insane. Personally, I always felt the methodical nature of the Hobgoblin as portrayed by Stern was a big part as to why I always took this villain more seriously than just another Goblin imitation.

But DeFalco is at least consistent about the characterization. As the battle nears its fateful conclusion, the Hobgoblin is ready to sacrifice his own body and health to take Spider-Man down with him. Prior to this confrontation, the Hobgoblin had always been portrayed as a character that hates Spider-Man, but has larger plans of domination/power-grabbing that make dealing with the Wall Crawler more of a nuisance than an obsession. The turn of events from ASM #251 appear to suggest that Hobgoblin’s vengeance for Spider-Man will now trump the machinations of his original plans.

There’s also how the “end” of J. Jonah Jameson’s career is handled in ASM #251. During my write-up of ASM #250, I joked that Stern threw JJJ’s admission to creating the Scorpion into the comic as a way to screw with future writers on the title (the way an outgoing showrunner ends his last episode with someone getting shot, or a shocking reveal). How can Jonah’s career survive the admission to funding a supervillain who likely has a few murders to his name? How can there be a Spider-Man universe without Jonah berating the “Public Menace” on the front page of every Daily Bugle? DeFalco sidesteps all this by having Jameson “step down” as editor-in-chief but stay on the paper as publisher. Given I’ve worked in a newspaper and in many ways, a publisher is even more powerful than the EIC, I can’t help but just shrug my shoulders at this development. In other words, nothing has changed at all. 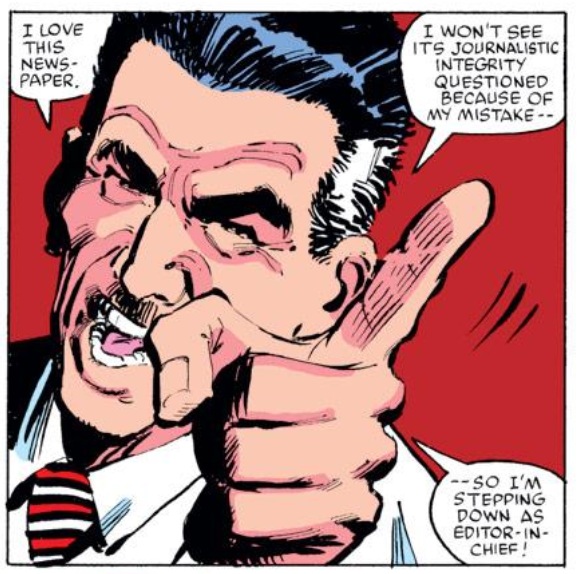 That still doesn’t take away from how excellent the final chapter of the “Original Hobgoblin Saga” is. To  use another analogy, I know there’s some hate for Return of the Jedi out there because of the lighter tone it takes on after the cerebral darkness of Empire Strikes Back, but it’s still a great movie on its own, and the right way to end this epic trilogy of stories.

But as I said earlier, this isn’t the end of the Hobgoblin. And even though I’m now at the end of my eight-week review of the “Original Hobgoblin Saga,” I think based on the popularity of these posts, and just my overall general interest in the subject matter (and the fact that it’s all so fresh in my mind after re-reading these stories in preparation for these posts), I’m going to spend ONE MORE week on 80s Hobgoblin. Next week, I’m going to write a series of posts dedicated to the identity of the Hobgoblin, including the origins of Roderick Kingsley, the ASM #289 reveal by Peter David, a Jim Owsley Web of arc that looked at the Rose and Ned Leeds, and then the 1997 “Hobgoblin Lives” retcon by Stern. While ASM #251 was a suitable ending for the “Original Hobgoblin Saga,” I won’t feel satisfied until I tackle these  topics on Chasing Amazing. After that, I’ll issue a bit of a Hobgoblin moratorium (unless, of course, he ends up in Superior Spider-Man).

This is the eighth and final chapter of the “Original Hobgoblin Saga.”