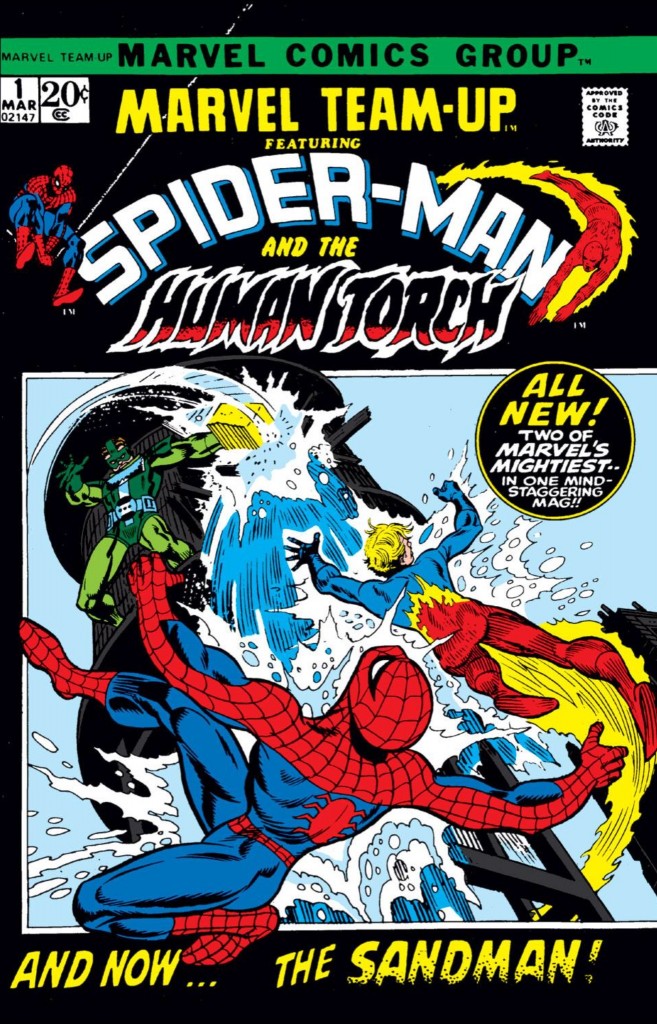 In celebration/recognition of the Amazing Spider-Man reboot (not to mention my recent acquisition of Amazing Spider-Man #1), I thought it would be fun if throughout May I spotlighted various No. 1 issues (and connected arcs) from the Spider-Man comic universe. And what better way is there go kick off “One Month” (for lack of a better name) than with a look back at the first issue of the first ever Spider-Man “B” series, Marvel Team-Up.

Declaring Marvel Team-Up  a bonafide Spider-Man “B” title is actually a source of some controversy. While Spider-Man was the chief protagonist of the series (traditionally teamed with another Marvel character as the title indicates), there were 9 issues where the Web Slinger never appeared in the book. But considering how the series consisted of 150 issues, I think having Spider-Man in 141 of those comics is enough to qualify MTU as a “Spidey book.” 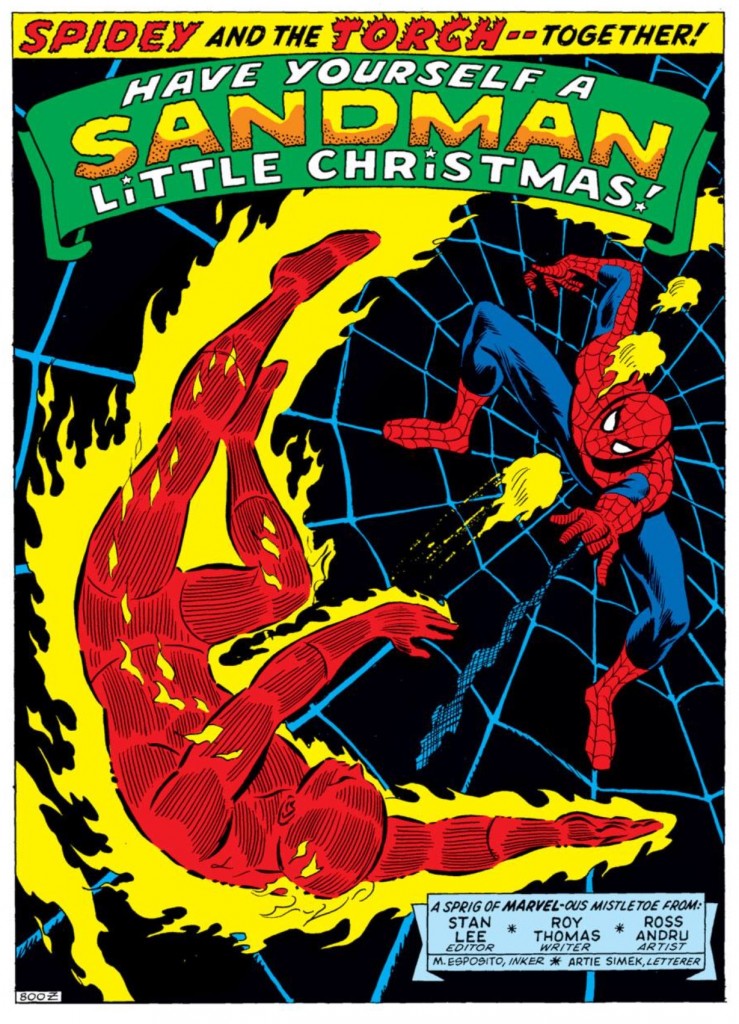 MTU #1 is unquestionably a quirky and odd way to debut a series, but it is also a byproduct of the time it which it was published. Stan Lee had just recently moved on from the character (and to bigger things in Marvel and the industry), passing the reigns over to Roy Thomas (who writes this issue) and eventually Gerry Conway. During this transitional period, as a character, Spider-Man was somewhat rudderless. It would still be another year and change before his life was totally turned upside down with the death of Gwen Stacy, which, for all of its controversy, forced the Spider-Man comic book universe to move in an entirely new direction. As such, a lot of these stories from circa 1971-1972 come across as being very inconsequential and frivolous.

Adding to the curiosity of MTU #1 is the fact that Marvel decided to make the first issue of a brand new series a holiday themed story. The title, “Have Yourself a Sandman Little Christmas” is a hokey play on words incorporating the story’s villain, Sandman, and it still strikes me as odd years later than this was the angle Marvel chose to lead with for a new book.

One would think MTU #1 would be more focused on selling the “team-up” concept of the series, rather than the concurrent Christmas holiday. As a result, Spidey’s alliance with Human Torch in this comic comes across as being very awkward. When Sandman attacks a New York City beach, Spider-Man seeks out the Fantastic Four because at that point in time, the villain had been feuding with the FF as a member of the Frightful Four stable. But rather than trying to enlist the Fantastic Four to help him defeat Sandman, Spider-Man seems more interested in pawning the bad guy off so he could leave and buy Gwen a Christmas gift. There’s just something about that premise that doesn’t ring true in the characterization department for me. Additionally, it diminishes any potential hype of a “team-up” since Spider-Man  only ends up fighting Sandman alongside the Human Torch because he is the only member of the Fantastic Four home at the moment.

The haphazardly structured nature of the Spider-Man/Human Torch alliance ultimately begs the question of whether or not Spidey should even be the headliner of a team-up book in the first place. Sure, the character was immensely popular and guaranteed to sell books just by showing up, but as I’ve mentioned in past posts referencing the Web Slinger’s time with the Avengers, at this point in history, Spider-Man was universally painted as a loner who got along with other heroes, but only to a point. Future MTU issues managed to put these fears about Spidey’s ability to work with others to rest, and the concept would evolve and be portrayed much more dynamically down the road, but I have to imagine some hardcore Spider-Man fans were scratching their head to see their favorite hero appear in a series called Marvel Team-Up only to open up the comic and see him shirk his responsibility as he does in the first issue.

Even with these less than stellar moments, MTU #1 does manage to introduce one somewhat historically significant idea – Sandman the “misunderstood” villain. Since first being introduced in Amazing Spider-Man #4 in 1963 (which only further disqualifies Spidey’s lame attempts to dump off his responsibilities on the Fantastic Four), Sandman had been portrayed as a crook and a creep. In fact, most Spider-Man villains introduced by the Stan Lee/Steve Ditko era (and later Lee/John Romita Sr. era) were fairly unsympathetic. 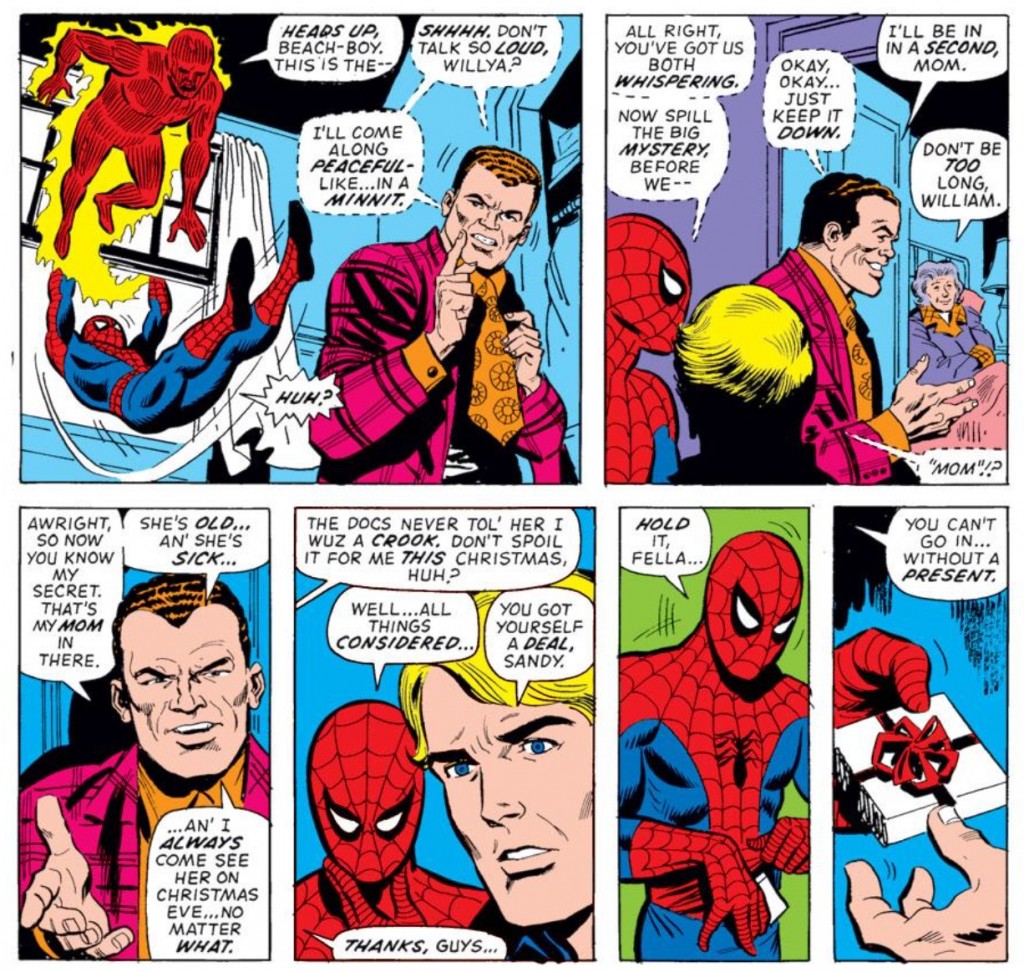 But perhaps because it was in line with the “holiday spirit,” or maybe because Thomas and Marvel had big plans for Sandman,  MTU #1 provides the character with some new-found complexity and depth. It starts after Spider-Man and Torch chase Sandman down to a random house. They discover that the villain is visiting his elderly mother, claiming it as an annual tradition around Christmas (and that’s why he needed to break out of jail). Spider-Man and Torch give Sandman the benefit of the doubt, and he naturally gives them the slip once they leave him alone.

Chicanery aside, the characterization of Sandman here is important to note because the character eventually evolves into a “tweener” of sorts who flip-flops between good and evil. He’s long been portrayed as a “reluctant” member of the Sinister Six who only manages to turn on Spider-Man again during the post-ASM #600/pre-Big Time run off issues. I’m always a fan of trying to change things up with a character when possible – especially a villain as cartoony and originally one-dimensional as Sandman, so Thomas and the rest of the MTU creative team deserve credit for their choices. 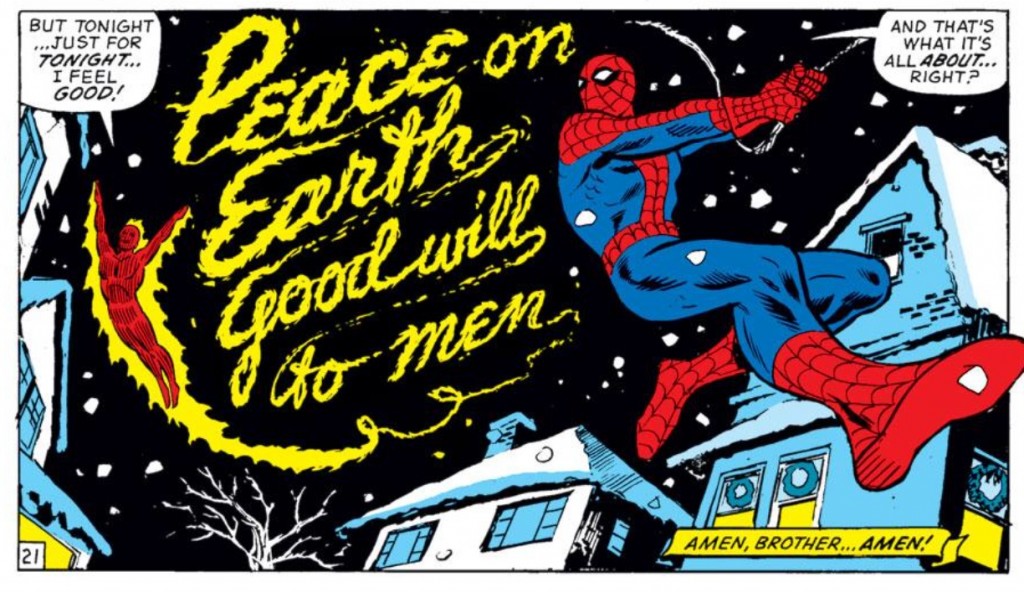 The ending of this comic couldn’t have been more forced, but after reading this issue multiple times, I in no way get the sense that fans of Spider-Man and other Marvel heroes where supposed to take MTU all that seriously. Fortunately, as time wore on and other creators such as J.M. DeMatteis and Tom DeFalco starting working on MTU, the series become more of a serious read (but never too serious. There were also issues involving Howard the Duck the cast of Saturday Night Live).

It helped that these future issues managed to avoid any future holiday themes.