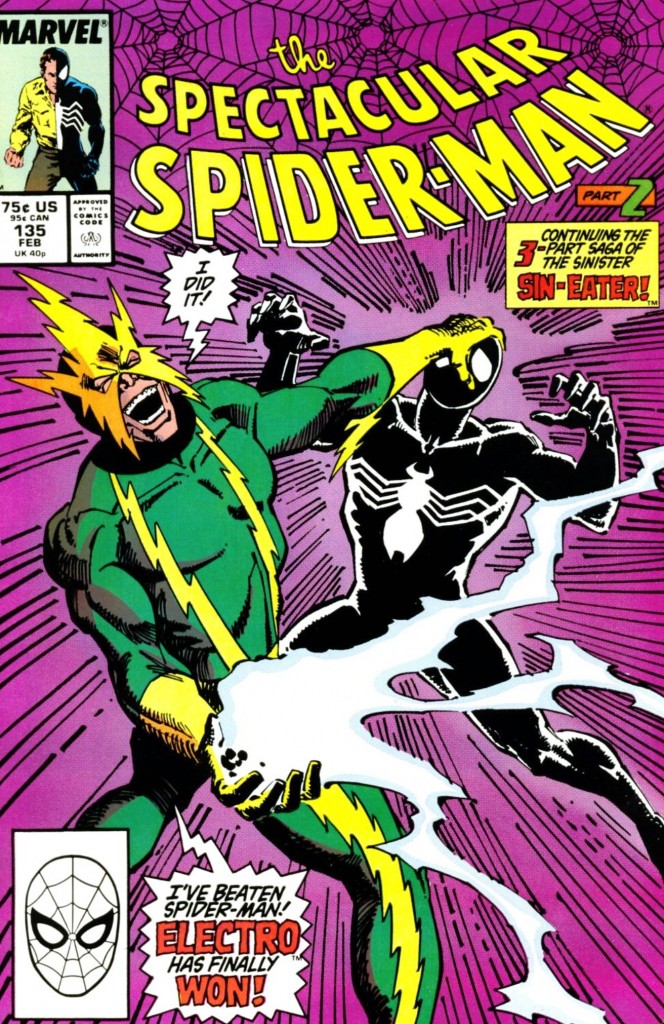 Demonstrating just how brilliant Peter David is able to weave together elements of comedy and tragedy, the 1988 Spectacular Spider-Man#134-136 arc “Return of the Sin-Eater” may just be the greatest Electro/Spider-Man story ever published, despite the fact that Electro is not technically the focal point of the arc.

Instead, as the name of the storyline indicates, these three issues are very much about Spider-Man learning to cope with the ways he crossed the line when apprehending Stan Carter, aka, the Sin-Eater, during the critically acclaimed “The Death of Jean DeWolff” arc.

Those of you who read all of my 50th anniversary Daredevil articles in April, should note that as much as I like David’s “The Death of Jean DeWolff” script, I have some very huge issues with its tone that make me question whether or not it should be considered a true Spider-Man story (for whatever that even means). Chief of my concerns is how David ends the story – with Spider-Man brutally beating on the Sin-Eater and then getting into a melee with Daredevil after the “Man Without Fear” tries to prevent Spidey from committing an act would likely regret. 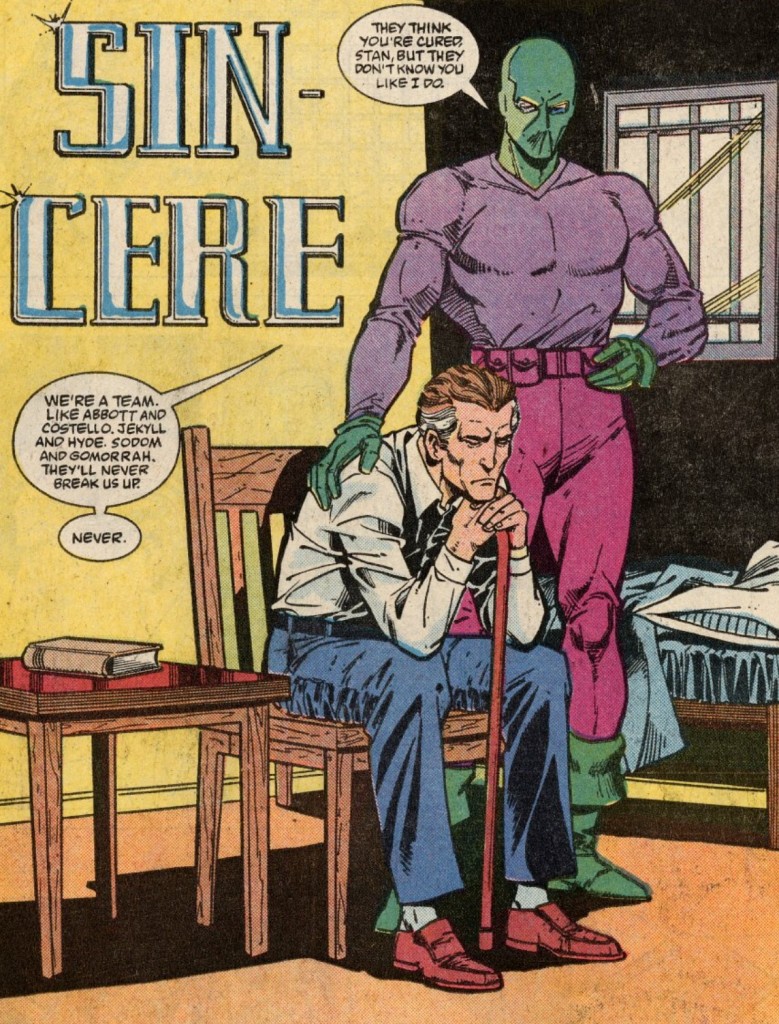 In “Return of the Sin-Eater,” Spider-Man is forced to deal with the ramifications of his momentary lapse of reason when the state declares that Carter is no longer a threat to society and releases him from prison. Spidey is naturally outraged by what appears to be a gross miscarriage of justice, but after visiting Carter in person to taunt him, the Web Slinger gets a close-up look at the damage he dished out. Carter appears old and frail, walking around with a pronounced limp, and has been rendered partially deaf from repeated punches to the head. Having to sit there and accept the carnage he is responsible for is too much for Spider-Man to deal with, so he flees Carter’s house as if he just saw a ghost.

These plot elements alone – Spider-Man is forced to confront some personal demons from the past – would be enough to make “Return of the Sin-Eater” a very riveting read, but then David goes ahead and ratchets up the drama by bringing Electro into the mix. After Spider-Man is freaked out by the site of Carter, he crosses paths with Electro in the middle of trying to pull off a heist. Thinking he has the jump on his old adversary, Spidey winds up and throws a punch … and makes laughably weak contact. Electro, stunned by the passiveness of the hero, flash fries Spider-Man and leaves him smoldering in the streets. Just to bring things full circle on the irony train, Carter shows up to chase away a bunch of onlookers who want to unmask the beaten Spider-Man – thereby “saving” the hero. 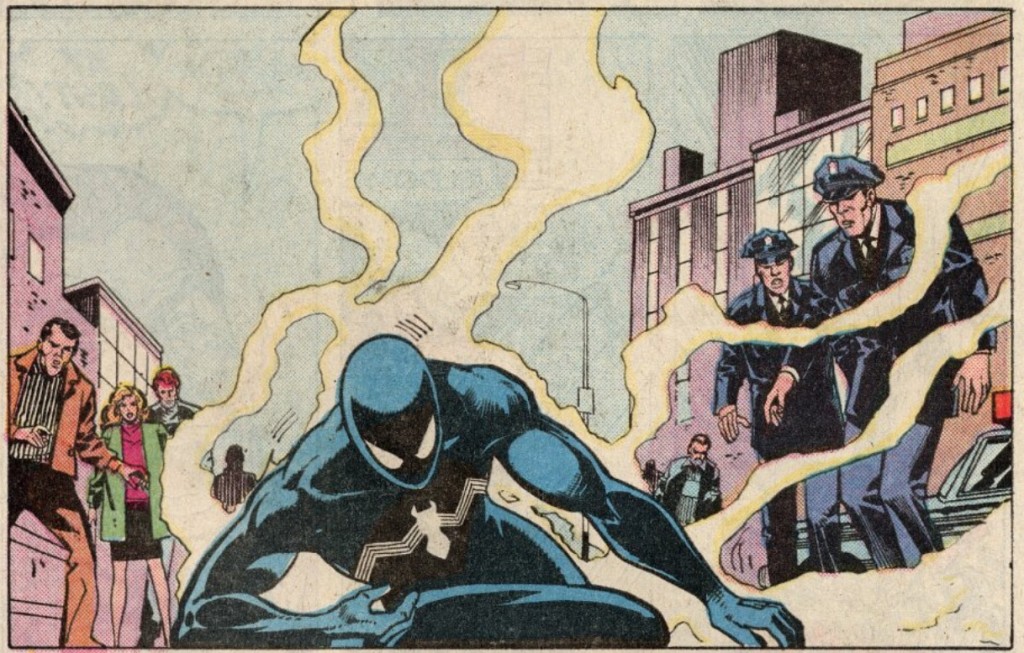 As it turns out, Spider-Man’s prior encounter with a broken down Stan has rendered him gun shy. While he’s always bragged about having the proportionate speed and strength of a spider, he’s never been forced to confront the ill-effects of such power, especially since the bulk of the villains he fights have outrageous powers of their own. So with Spider-Man feeling extra guilty about his strength, he inadvertently goes soft on Electro, giving him an opening to zap away.

Each time I read this story, I realize more and more what a brilliant choice David made in casting Electro as the tertiary character. As I discussed in my “Rebirth of Electro” post last week (a storyline that was published after “Return of the Sin-Eater” mind you), despite being one Stan Lee and Steve Ditko’s earliest creations, Electro has never been able to break his  B-list villain typecast. He’s great as a member of a team like the Sinister Six, but he’s never achieved much success on his own, in large part because once  you strip away his powers, as Max Dillon, he’s a bit of a goon and a loser. 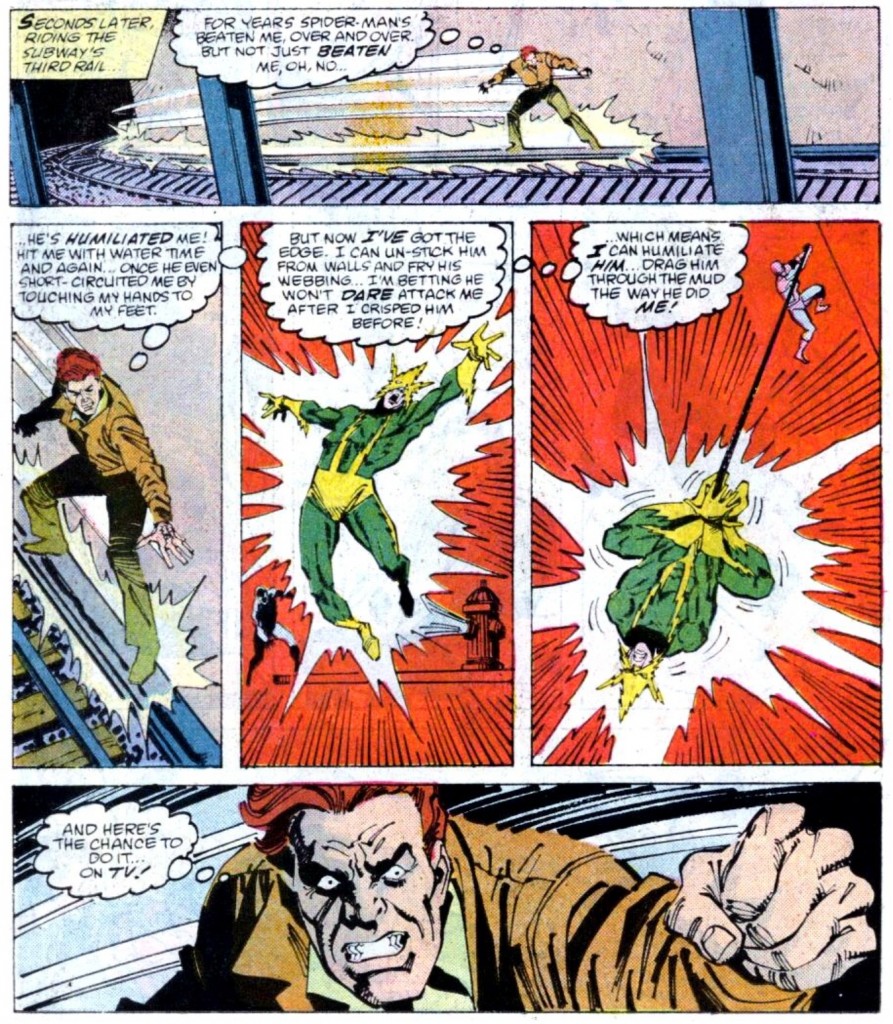 All the same, Electro has a pretty awesome power set, so while he’s never been successful against Spider-Man in the past, it is at least conceivable that he’d be able to get a leg up on the Wall Crawler if the right opportunity presented itself.

Because of these dynamics, “Return of the Sin-Eater” probably doesn’t work if the third character is someone too low on the totem pole, like a Boomerang or Speed Demon because readers would never buy these guys as ever being a true threat to Spidey. And a tippy-top tiered villain like Doc Ock, Green Goblin, or even someone like Sandman (I don’t recall if he was a hero or a villain at this point) wouldn’t work because readers wouldn’t buy the fact that a gun shy Spider-Man would ever be able to rally against a guy who gave him fits in previous confrontations when he was at full strength. 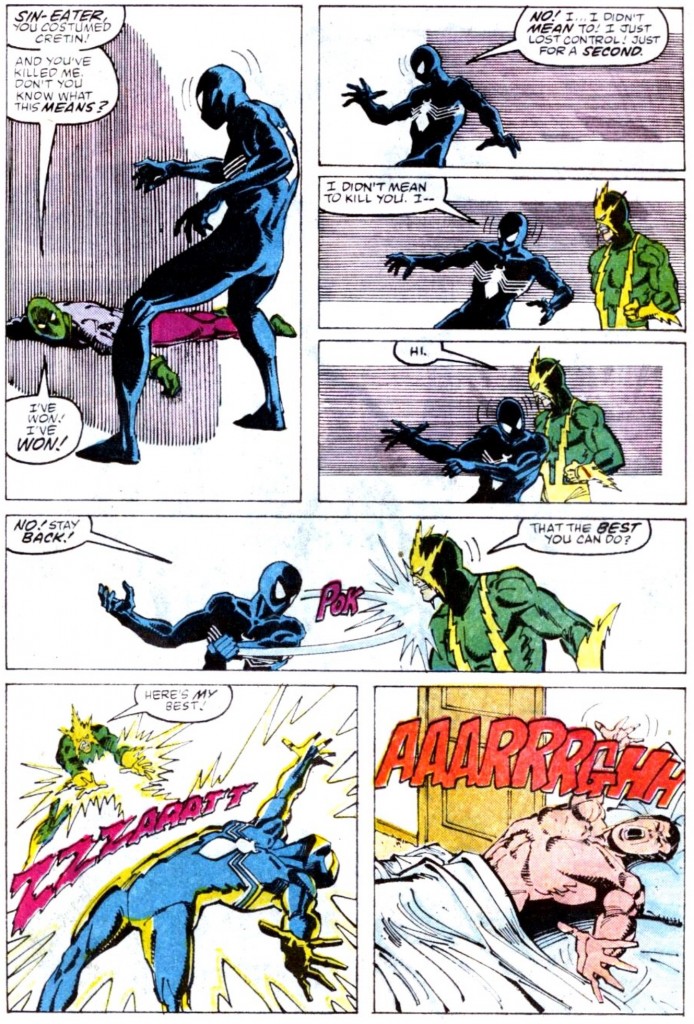 Electro is the Goldilock’s porridge of Spider-Man villains – not too weak, not too strong … he’s JUST right. Plus David’s depiction of a victorious Electro walking around the streets of New York City like he’s the cock of the walk is very funny and too good to pass up.

As is usually the case, Spider-Man is able to overcome his guilt, doubt, etc. and eventually brings the fight to Electro. Because Peter and Mary Jane are fresh off their nuptials, this is one of the earliest storylines I can remember where Spider-Man is seemingly inspired by the love and encouragement of his wife (who also delivers one heckuva line courtesy of David where a downtrodden Spidey swings away wishing things would go back to “normal” and MJ whispers to herself that only in Peter’s world is wearing black and white tights and acting like a human spider “normal”).

In addition to MJ, Spidey is able to get his bearings back when he confronts Carter a final time (Carter would later commit suicide by brandishing an unloaded shotgun in public and threatening a child, thereby inviting the police to take him down in a hail of gunfire). What Spider-Man and Stan’s conversation lacked in length, it made up for with substance as Carter basically tells him he’s not going to absolve or forgive Spidey for the beatdown he gave him, but that his forgiveness is irrelevant anyway. Instead, Carter tells Spider-Man to exorcise his own demons, which gives the hero the resolve to meet Electro at a power plant for a showdown. 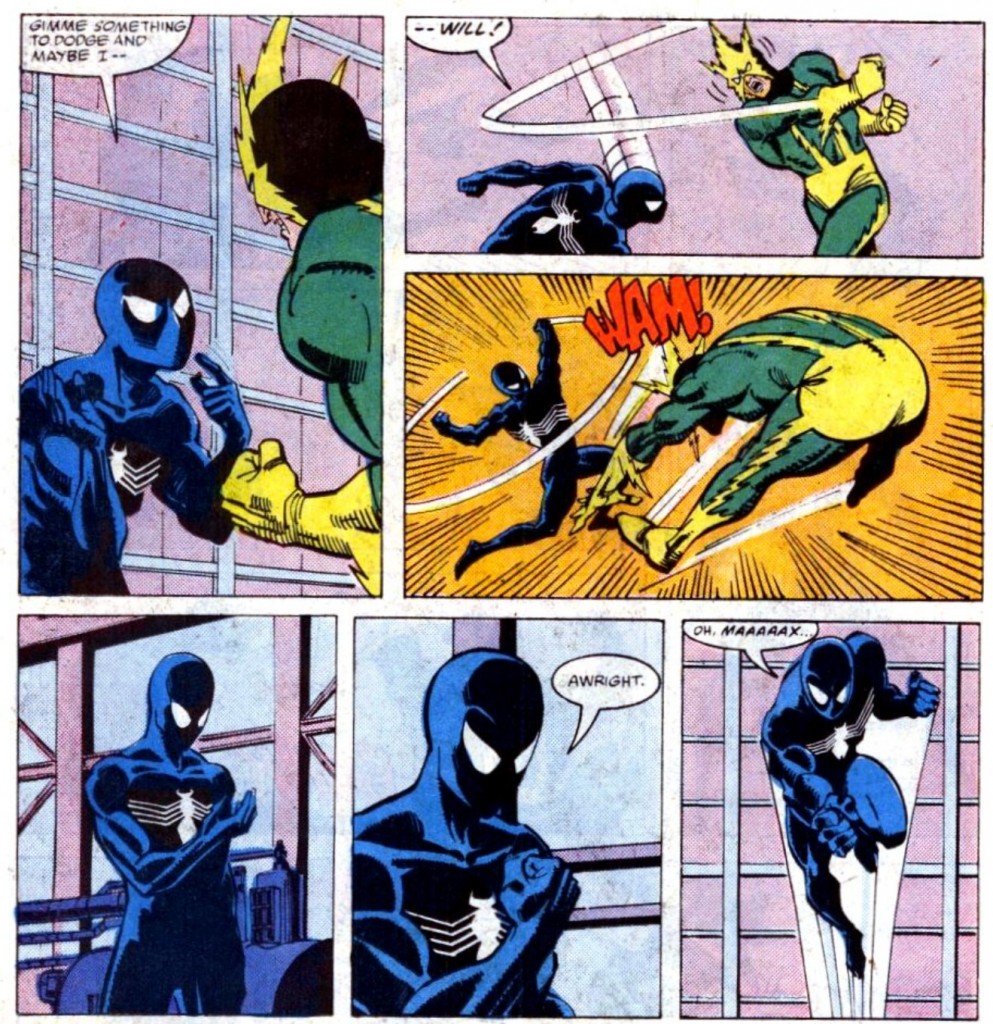 The final fight between Spider-Man and Electro actually borrows from the Rock Balboa/Clubber Lang fight in Rocky III (a fight that MJ references earlier in the storyline during a conversation with Peter) in that Spider-Man has to get knocked around a bit by Electro first before he gets angry enough to wind up and deliver a knockout punch (which is augmented by artist Sal Buscema with an extra big and wonderfully goofy “POW” in the background).

While I’m sure I’m going to inspire controversy in saying this, in some ways, I think “Return of the Sin-Eater” surpasses “The Death of Jean DeWolff.” It inherently feels more like a Spider-Man story than its predecessor, and paints a truer picture of Spider-Man as a character – someone identifiable who would let the guilt of a past transgression affect his ability to be a superhero.

As for Electro, while he plays a pivotal role in this story, it’s also difficult to say that “Return of the Sin-Eater” is about him. Instead, he just gets to be a part of a really fun Spider-Man storyline, which by proxy means it’s probably my favorite Electro storyline.