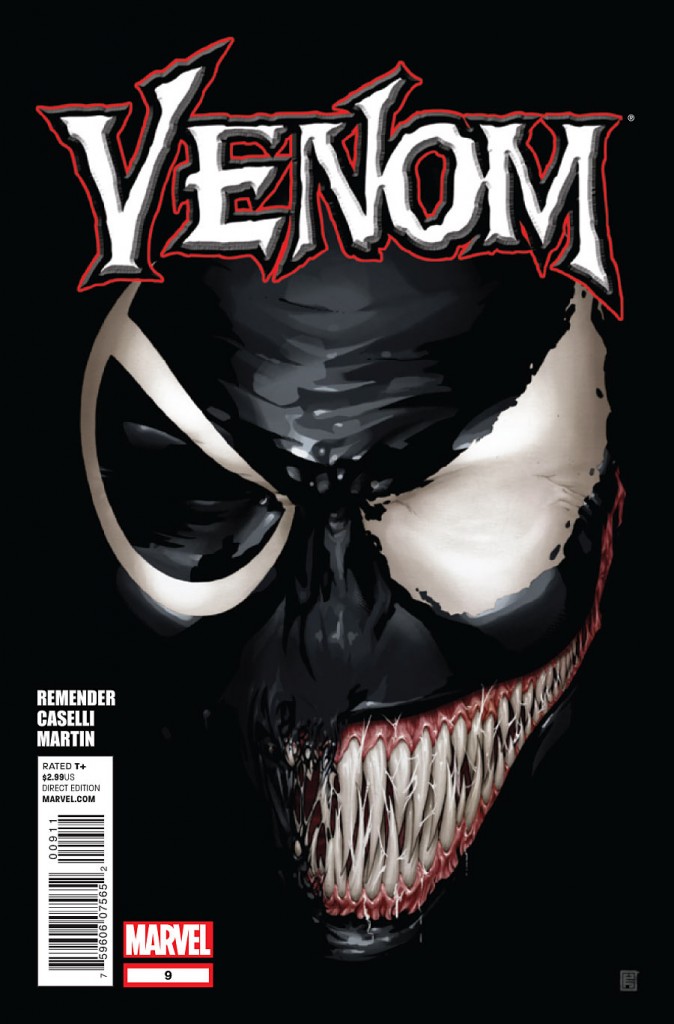 Despite Marvel’s best efforts over the years, Venom, in my mind, is a villain. Sure, you can try teaming him up with Spider-Man to take down a bigger alien-threat in Carnage, or you can bond long-time loveable goon Flash Thompson with the symbiote and make him a U.S. government operative, but I’m still always going to come back to the guy who persistently stalked Spider-Man, nearly decapitated the Black Cat and has killed many, all in the name of “protecting the innocents.” Not that there’s anything wrong with what Rick Remender is currently doing on his Venom series – using Flash to create a compelling backstory for a character others had deemed one-dimensional in recent years – but When you throw Venom’s name out there, that’s just what I think about. 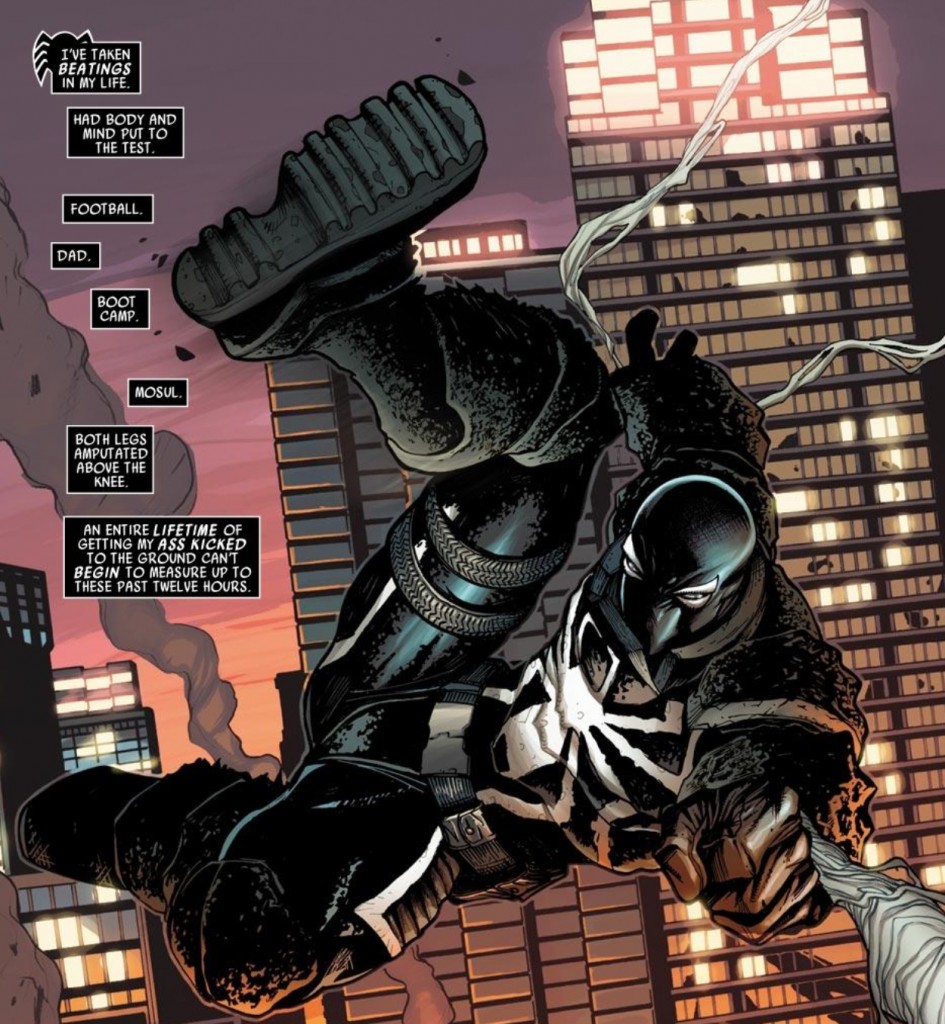 That’s why I found something very familiar about what Remender put forward in Venom, issues #9 and #10. While there’s still plenty of complexity and depth of character here – the death of Flash’s father and the fact that one of his adversaries, Jack O’Lantern, knows his identity and will use it against him, both loom large in the storytelling – there’s also plenty of old-school Venom action here. Unpredictable, slimey-tongued, will-do-anything-for-the-symbiote action.

Because when I think long and hard about what made Venom such a great foil for Spider-Man when he first burst on the scene in the 1980s, it wasn’t just the fact that he was bigger, stronger and didn’t trigger his Spidey Sense. It was the fact that Venom had all of Spider-Man’s powers but none of his morals, scruples, and predictability. Venom operated using a vastly different moral code than Spidey, which made him so much more dangerous. Like any kind of nut or zealot, Venom did all that he did because he felt his actions were righteous and justified. Venom had great power and responsibility, it’s just that according to him, his responsibility involved killing Spider-Man and preserving the symbiote at any cost, even if that meant some collateral damage along the way. 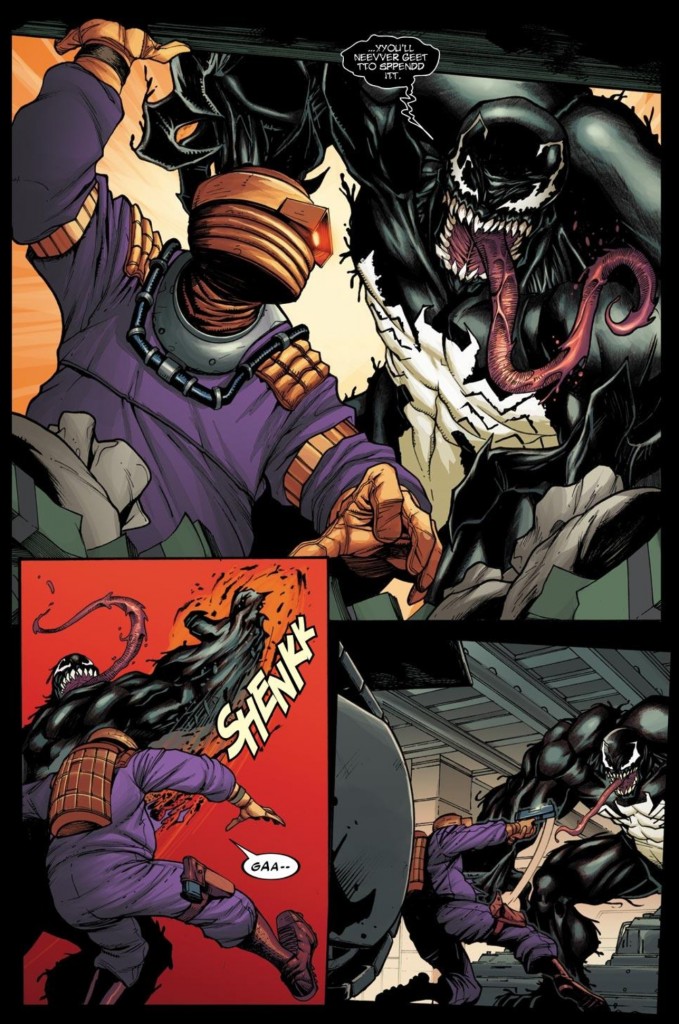 And that’s what you have in spades across these two issues. A madman driving a tank runs over an innocent family in #9? The dark side of the symbiote takes over and Flash/Venom goes on a rampage, tongue drooling, teeth gnashed, until he rips the criminal apart. Compare that to Spidey, who after vowing that “no one dies” in ASM #656, nearly gets killed while taking on a new villain Massacre, a man who kills without remorse. Spidey always manages to avoid stooping to the bad guy’s level.

Then there’s the fun confrontation between Flash/Venom and his hero, Captain America, in #10. Granted, Flash is in complete preservation mode, needing to carry out an assignment for the Jack O’Lantern, or risk the life of his girlfriend Betty Brant. But Cap has seen this show before and tries to “relieve” Venom of his duty and have him give up the symbiote. Rather than listen to reason, or try and form an alliance with Captain America that would help take down Jack O’Lantern and save his girlfriend, Flash/Venom takes the fight right to him and is then on the lamb, making his way out to the west coast where he will inevitably join up with the Secret Avengers and possibly taint another comic book series that I love by over-saturating the character in as many super-groups Marvel can come up with.  But I digress. 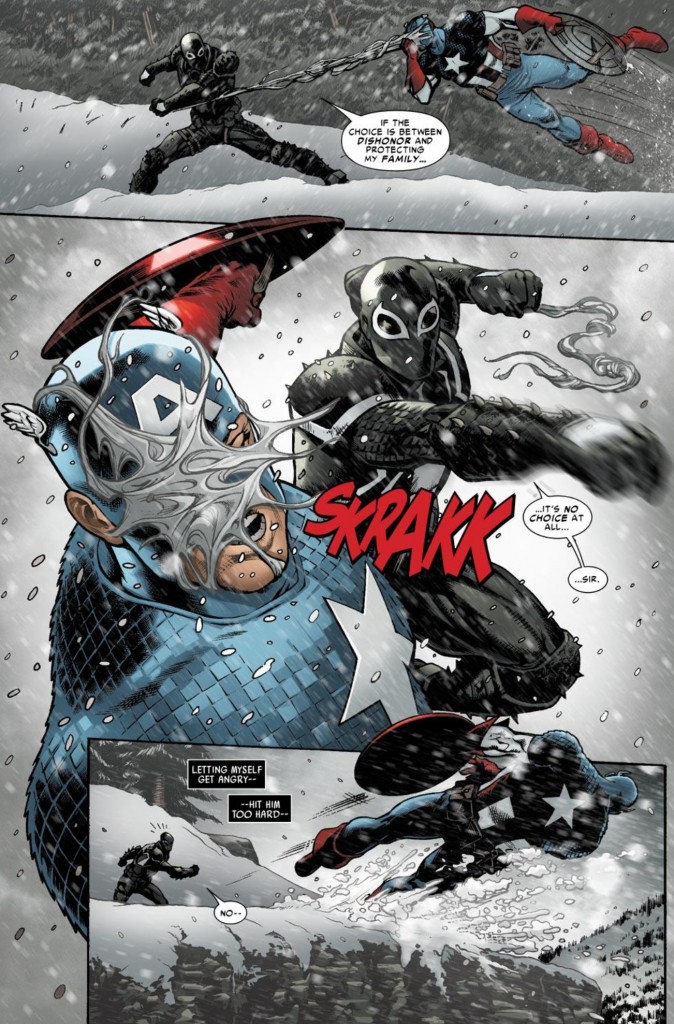 Still, while I appreciate Remender’s cerebral approach to the character – never in 2011/12 would I think I’d be praising a series centered around Flash Thompson as Venom – it’s good to see that unpredictable, psychopathic side of the symbiote return for these past few issues. It keeps the character true to its roots and honors the fact that an alien creature hell-bent on controlling its host is not going to play by the rules for more than an issue or two. And considering what an emotional-wreck Flash currently is, now is the time for the Venom symbiote to wreck havoc.