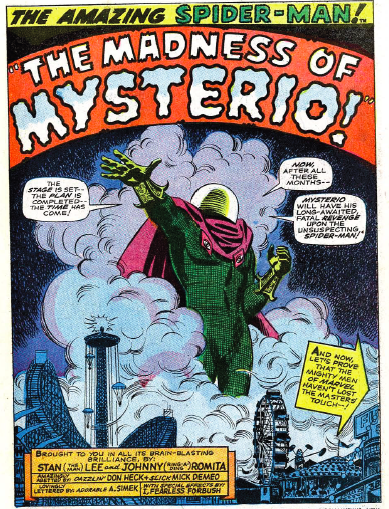 I feel like fans and critics toss around the terms “underrated” and “overrated” a little too loosely, especially when it comes to the world of pop culture. I’ve personally been guilty of using these phrases when I talk about the world of Spider-Man and all of its characters, writers and artists. Yet, here I go again, as, in an effort to continue my bit-by-bit series about the current team-members of the Sinister Six, I’m faced with writing a post about Mysterio, and all I keep thinking about is what an underrated villain he is in the Spidey library.

That’s because when you talk about the upper-level echelon of Spidey villains, Green Goblin and Doctor Octopus are easily interchangeable as #1 and #2. For more Modern-era villains, I can’t argue with Venom, specifically the Eddie Brock incarnation, who, despite his devolution into a brain-eating monster over the years, was a mighty, might adversary capable of causing incredible chaos in Spider-Man’s superhero and personal life. From there, if you’re rounding out the Top 5 all-time great villains, I absolutely have to put Mysterio on that list, yet I’m under the impression that by doing that, I’m probably overrating him in the eyes of some.

With a fishbowl for a head, and lackluster physical combat abilities to speak of, Mysterio is not the type of villain who gets his own mini-series like Norman Osborn, or gets plastered on t-shirts like Venom and Doc Ock, or who even has many action figures made in his likeness. Yet, he’s a character who’s consistently tormented Spider-Man since the near-beginning of ASM and as the master of special effects and illusions, he’s been able to do it in a way unlike almost any other villain in the Spidey universe.

There’s something to be said about the ability to mess with a character’s mind. In a more cerebral superhero universe, like Christopher Nolan’s Batman movie franchise, mind games are seemingly valued over physical strength (though we’ll see how that’s changed with the introduction of Bane this summer). Yet, the Marvel universe has almost always put the onus exclusively on physical might. Hulk and Thing were physical marvels capable of strength unknown to man’s imagination. Green Goblin has the perfect combination of psychosis, gadgetry, money and superhuman strength. Doctor Octopus in his heyday was able to consistently overpower Spider-Man physically because of his four mechanical arms. Venom was a brute. Sandman could manipulate his physical self to create combat issues. And on and on … In a face-to-face setting, Mysterio couldn’t physically match Spider-Man. But he still got the better of him on numerous other occasions, and for that, I have to consider him an A-list villain. 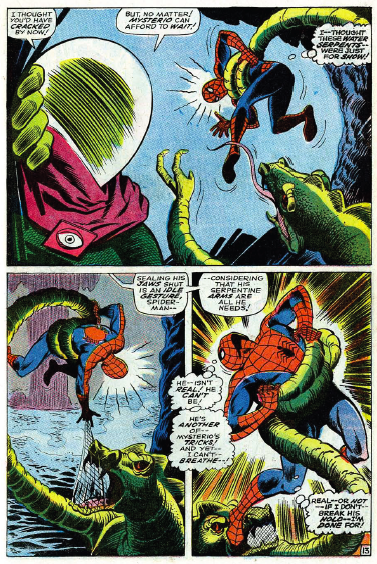 Two of my favorite Mysterio storylines demonstrate his mind games at their best. In ASMs #66 and #67, through the power of illusion, Mysterio tricks Spider-Man into believing he’s been shrunk down to six-inches tall, and is fighting for his life in a carnival that has been tricked-out with all sorts of deadly pratfalls, like poisoned glass mirrors and giant axes. What is especially alarming about this deceit, is that it comes on the heels of Peter’s long-simmering reconciliation with the first love of his life, Gwen Stacy, who had been ignoring him and refusing his calls after a misunderstanding involving Peter and her father. Peter should be living the high-life now that his girl is back on his arm, but instead he’s faced with a potentially unalterable situation where he’s six-inches tall and unable to survive Mysterio’s house of horrors. Of course, in the end, Spider-Man is natural size and once he’s able to block out what he sees and trust his spider senses, he tracks down Mysterio and beats him easily.

In similar fashion, in the lead-up issues to ASM’s semi-epic 200th anniversary issue, Mysterio tricks Peter into believing his Aunt his death in a scheme to collect money from the nursing home where May was living (it’s worth noting that Mysterio has no idea that May is Spider-Man’s Aunt). During his pursuit of Mysterio, Spider-Man is faced with a number of obstacles, like ferocious tigers, without knowing that these pratfalls are indeed harmless illusions. To survive the battle, Spidey has to literally close his eyes and trust only his Spider Sense (have I mentioned how much I love that attribute?) in order to survive this descent into madness. 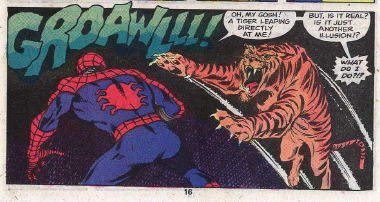 And while I’m sure there’s a contingent of Spider-Man fans out there reading these last two paragraphs and rolling their eyes thinking, “how could a guy who can be defeated by Spider-Man with his eyes closed be a top 5 villain?” I counter by saying how can someone as smart as Peter Parker be duped, time and time again by Mysterio’s illusions? Because despite the fact that all Mysterio has are illusions, he sets Spider-Man up so expertly, that a hero with enhanced instincts as one of his superpowers refuses to trust those instincts until he’s on the edge of defeat. Mysterio’s tactics are the closest a villain has come to neutralizing Spider Sense without literally being unable to trigger it a la Venom. That’s pretty impressive. When you consider how often Spider-Man/Peter’s intellect is emphasized in ASM, and you have to give even more credit to Mysterio, for being able to match wits with a character who is constantly able to outsmart his adversaries.

So with that in mind, I like to think that my consideration of Mysterio as one of Spidey’s best villains ever (directly behind Goblin and Doc Ock) is an adequate “rating” of old fishbowl head. Those of you who think less of him, are clearly underrating him, and those who think he’s the best ever, well, that just might be a bit of an overrating!