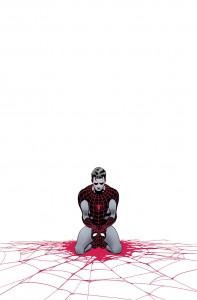 As a companion to the “Remembrance of Comics Past” tomes I will post on Chasing Amazing, I thought it was also important to look at the other end of my collection — the new issues. Amazing Spider-Man is still a living, growing entity, publishing issues twice a month. I’ve been a regular subscriber to the series for more than seven years and will continue to be one until the series is inevitably cancelled or goes completely digital (that’s a rant for another day).

I think it’s important to establish that while I’m a collector of these comics, at the core, I’m primarily a fan of Spider-Man. When I first started reading comic books, there were  certain themes, characters, storylines, etc. attached to Spider-Man that made me gravitate towards that series more than any other. I’d like to use these newer issues to illustrate that certain “je ne sais quoi” that makes me specifically a Spider-Man fan. These will not be reviews. There are plenty of other sites that provide that. Just my own interpretation of the current Spider-Man universe and how it ties into my past.

Something that has always struck me about the Peter Parker/Spider-Man character is at the core, he’s a loser. Look at other characters in the comic book universe: Batman is tortured and brooding, but is also a billionaire industrialist who surrounds himself with swank vehicles and contraptions. Superman is basically a demigod who gets interpreted as Jesus Christ by filmmakers these days. The X-Men face prejudices because they’re mutants, but they also have an outlet at Professor X’s mutant academy, where they are made out to be exceptional. Tony Stark, the man underneath the Iron Man suit is an alcoholic, but is generally awesome. But Spider-Man was always different. He’s an orphan who lives with his elderly Aunt and Uncle and within days of getting blessed with superhuman powers after being bit by a radioactive spider, he’s inextricably linked to the death of his Uncle when he refuses to stop a petty thief out of spite and then the man goes on to shoot his Uncle while he’s fleeing the police. 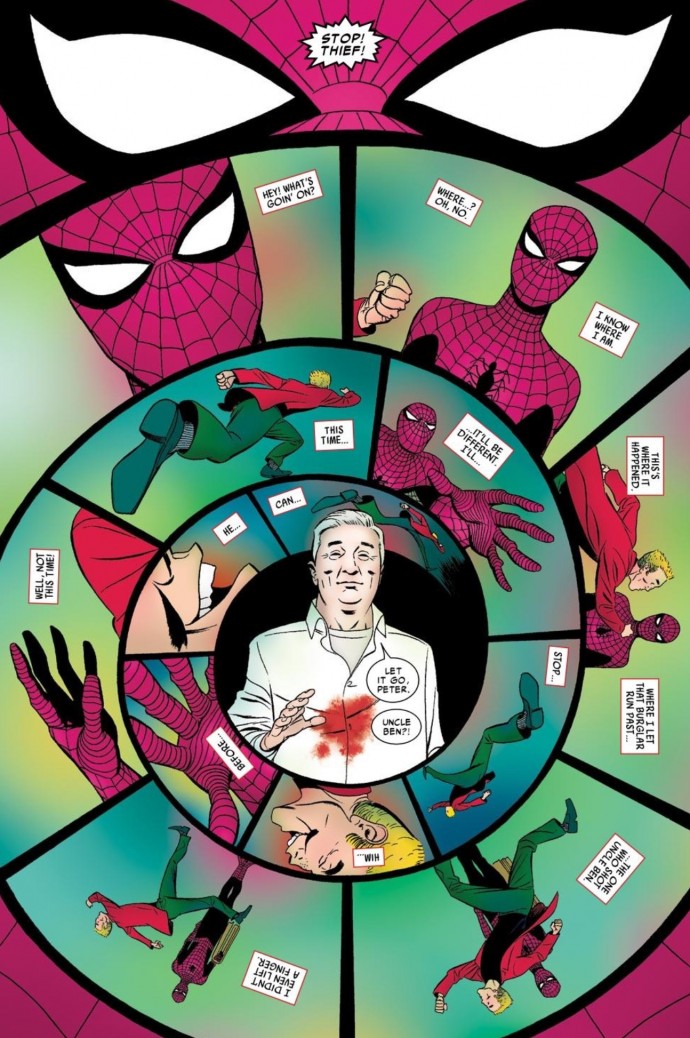 While that may be enough to provide a lifetime of therapy and torture for any superhero, there’s just so much more pain and suffering in store for Spider-Man. While dating a pretty, intelligent girl in college, Gwen Stacy, her father is killed by falling building debris while Spider-Man is fighting Doctor Octopus. Gwen goes on to blame Spider-Man, and since Peter has never revealed himself to her, he has to carry the burden of secretly being someone the love of his life hates.

Then, as if the screw needed to be turned some more, Gwen Stacy is killed when she’s thrown off a bridge by Peter’s arch-nemesis, the Green Goblin and Peter is unable to use his webbing to catch her in time (or depending on your interpretation of the comic panel, Gwen’s neck might have snapped when Spidey’s web snares her). Oh, and did I mention that the Green Goblin is actually Norman Osborn, the father of Peter’s best friend, Harry? And the reason why Gwen is kidnapped and killed is because the Goblin figures out that Peter Parker is Spider-Man, so he wants to hurt him as deeply as possible by killing the woman he loves.

It’s worth noting that when Marvel Comics published “The Night Gwen Stacy Died” in 1973, this was considered groundbreaking, heavy stuff for a comic book. A superhero’s girl was never really a casualty up until that point and many comic historians (if there is such a title. If not, I’m making it up now) define that moment as the end of an entire ERA of comics (the shinier, happier Silver Age, making way for the grittier Bronze Age).

There’s even more I can ramble on about (Peter’s marriage to Mary Jane which is annulled by the Devil, clones of Peter running around who may actually be the real Peter, etcetera, etcetera, etcetera). In a weird, sadomasochistic way, the pain that Peter has been put through has always been a draw for me. While I’ve been fortunate enough to not experience emotional distress on the level of what Spider-Man’s writers have put their hero through since his creation, I’ve also lived a far from perfect life, filled with instances of emotional pain, abuse, betrayal and failure. As someone who was shunned and mocked when he was younger because academics came easier for me (aka, I was a “nerd” who wore glasses, “for shame”), Peter Parker, the wallflower who was abused outside-of-costume by his peers was easy for me to identify with. And because his life is still an emotional mess, even when he’s wearing his Spidey suit, there’s a level of imperfect humanism you just can’t find elsewhere in popular culture. There’s no question, Spider-Man is still a hero, capable of doing extraordinary things, but his superhumanism doesn’t change the fact that he’s also still human.

In what may end up being another turning point in Spider-Man’s life, in ASM #655, Peter is once again faced with the death of an innocent because that person was too close to Spider-Man. Marla Jameson, the wife of former Daily Bugle editor and now New York City Mayor J. Jonah Jameson is killed during a battle between Spider-Man and the Spider-Slayers. Jonah, who has had a sometimes comic, sometimes sadistic vendetta against Spider-Man throughout the comic’s history, blames himself. But Peter/Spidey knows better. If there was no Spider-Man, there would be no Spider Slayer. And if there was no Spider Slayer, this innocent woman would probably still be alive. 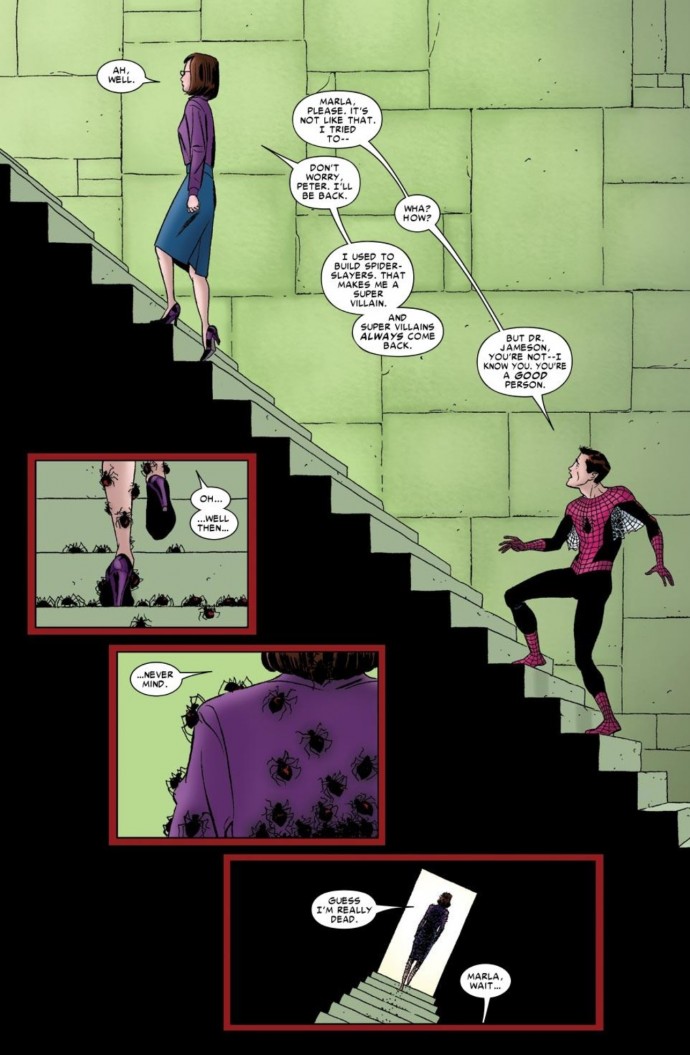 In addition to the mournful-looking cover (with an effective use of stark white), the issue revisits the ghost of Peter/Spider-Man’s past — characters who have died because of their connection Spider-Man. While Marla Jameson was hardly as essential to the Spider-Man canon as Gwen Stacy or Uncle Ben, I still think it’s effective when Marvel goes back to this well for Peter. The language and storytelling techniques used in Spider-Man comics have changed dramatically since the 1960s — as they should. While comics have always existed in this paradoxical universe where time is essentially frozen (otherwise, Peter would be in his 60s and his Aunt May would be about 150 years-old), in order to attract new readers and maintain relevance, the stories have to reflect contemporary ideas. But while the Spider-Man universe may now incorporate text messaging and iPhones, these classic occurrences in the series’ history are not lost. A death that occurred in 1973 is just as relevant in 2011 because for Peter/Spider-Man the wounds are still relatively fresh. Just like in real life — when any of us are ever wounded so deeply, so profoundly, the amount of time that has passed is irrelevant. These ghosts still haunt us.

The heart and soul of the entire Spider-Man series was Uncle Ben’s parting advice to Peter during the origin story in Amazing Fantasy #15, “with great power comes great responsibility.” It’s a brilliant sentiment and something I’ve held on to for years. I remember using the phrase in an eighth-grade report on George Orwell’s Animal Farm. I think I confused my english teacher when I told her I was actually quoting a comic book, but who says you can’t learn life lessons from cartoons?

Simply put, Peter acknowledges that as long as he has the great physical power that comes with being Spider-Man, he has a responsibility to his friends, family and all of mankind. At the end of ASM #655 Peter pledges that no one else will die – a near impossible goal. But Spider-Man readers accept it because how else is a character supposed to act when he’s been so ravaged by his double-life. If the Spider-Man writers were to introduce the death of another innocent, and not reference the ghosts of Spidey’s past, it would mark a major betrayal of the character’s roots. And a major betrayal of the human condition that has made Spider-Man such an incredible character to root and mourn for.