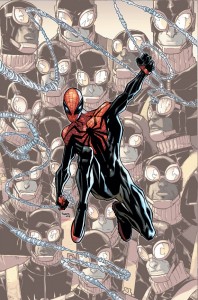 It appears that every time Marvel announces a “brand new era” of Superior Spider-Man (and with the release of Superior Spider-Man #14 last week, I think we’re officially up to our third “new era” in the title’s very short history) the dramatic status quo shift is that Otto Octavius has become more dominant in his new role as Spider-Man.

Superior #14 shows Otto at his most powerful since he stole Peter Parker’s mind, body and identity. In his quest to prove himself as the “superior” version of Spider-Man, and in a demonstration of his brand new army he’s built up as part of his underhanded deal with J. Jonah Jameson last issue to take the abandoned Raft super prison and turn it into his personal headquarters dubbed “Spider Island II,” Spider Ock is doing what no other superhero or super team has dared to do: take the fight to the Kingpin’s front door and shut down his Shadowland fortress (by any means necessary).

Beyond the vicious attack on Shadowland and its mystical “Hand” ninja warriors, Superior 14’s Spider-Man flashes a new costume complete with some extra appendages akin to Spidey’s “Iron Spider” armor from the early/mid-2000s. In a moment of vindication for me, when I spotlighted this arc a few months ago (as part of a tie-in I was doing for Iron Man 3) I mentioned that now would be an excellent time for Marvel to dust off the Iron Spider get-up, especially with Doc Ock assuming the mantel of Spider-Man. My biggest disappointment with how the costume was used in Superior #14 was that at no point in the issue does Otto provide us with any insight as to why he’s using some of the Iron Spider’s technology NOW (I’m assuming he’s probably enhanced it 500 different ways). Instead, the costume appears to be some kind of device from writer Dan Slott to beat readers over the head with the fact that Otto is becoming the Tim “the toolman” Taylor of superheroes and is constantly seeking “more power” (cue manly grunt here). 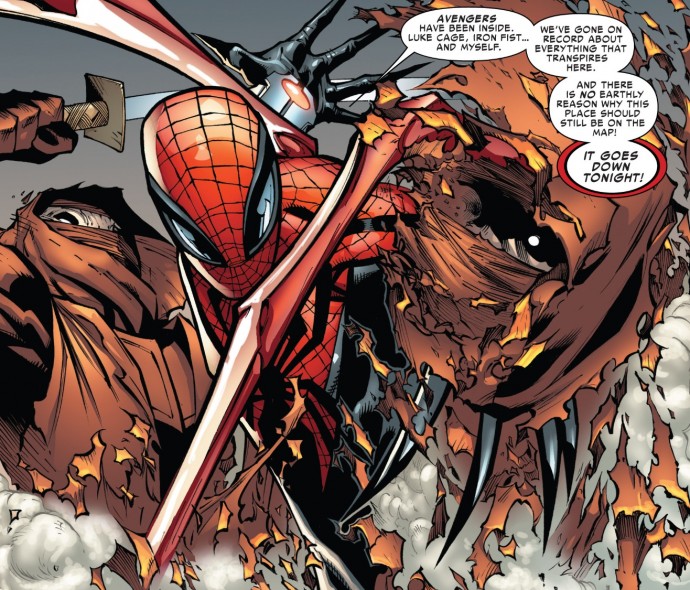 My nit picking of the new costume speak to some larger issues I’m starting to have with Superior Spider-Man. This comic book series suddenly feels like one of those giant weekend long keg parties I attended when I was younger (but still drinking age for all you kids out there), that was a whole lot of fun the first night and still an amazing time the second night, but by night three, just the smell of bud light made my stomach sour and I was more than ready to pack it in and end the celebration. Everything about Slott’s Spider Ock right now is bigger, biggest, bigger-est (and that’s even more the case with wildman Humberto Ramos doing his super sketchy style on the art side for the issue). Spider Ock has got minions, spiderbots, and big Star Wars-sized robots that fire canons. In a matter of moments, Shadowland is decimated, Kingpin and Hobgoblin are on the run and Jonah can’t do anything to stop the guy he hates most in the universe because he’s being blackmail. 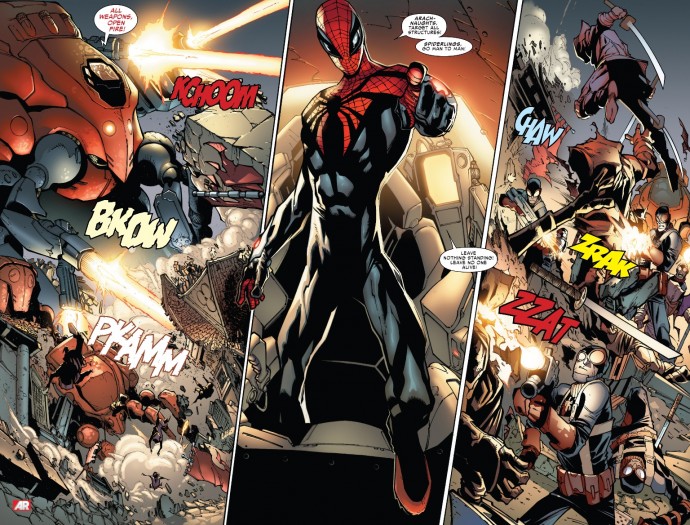 Things are just coming TOO easy for Spider-Man. This was fun for the first dozen issues or so, but I’m starting to lose patience with the overindulgence of the Superior premise. And this isn’t about me sitting here and complaining about wanting Peter Parker back along with all of his guilt, bad luck and misery. Sure, it’s fun to see a Spider-Man who’s actually successful at what he does rather than a Spidey who always seems to be apologizing for the fact that he’s a superhero. And Slott is absolutely still laying the groundwork for Otto’s comeuppance: things to note in this issue are how Wilson Fisk immediately recognized whoever was in the Spidey costume was an impostor and how Spider Ock’s surveillance spiderbots seems to be malfunctioning one after the other. These are some serious chinks in the armor that Otto is completely oblivious too because he’s too busy celebrating the fact that he’s taken down the Kingpin and sent the Hobgoblin on on the open road (where he will presumably be confronted by Spider Ock if the cover art for Superior #15 is to be trusted). 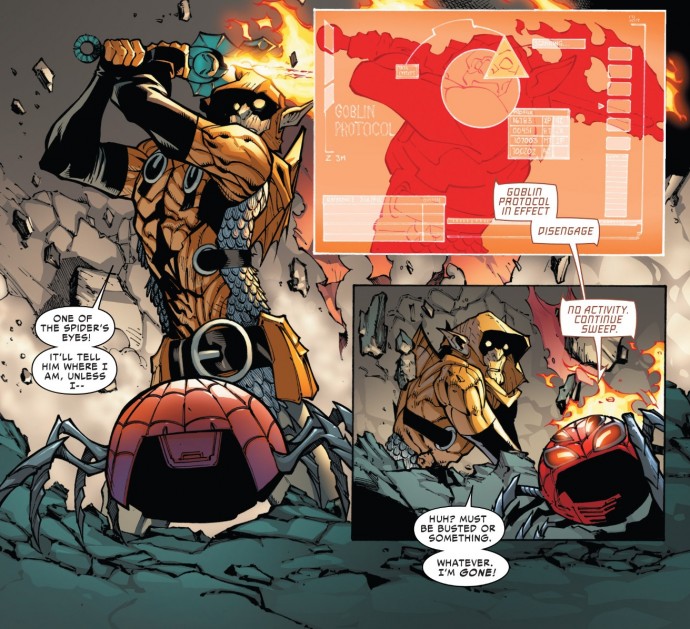 And more than everything else is the rise of the Green Goblin, who’s still collecting all of the criminal castoffs from Otto’s war one organized crime. With the Kingpin’s defeat, the Goblin is now at 51 percent and seems like he’s finally ready to make his big move that’s been test twice earlier since Superior began. 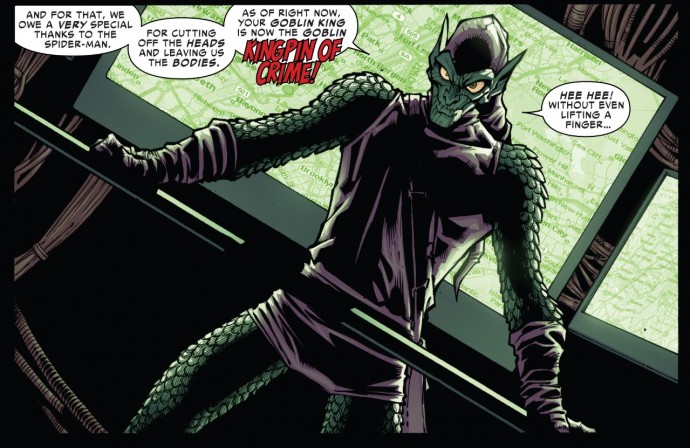 But these are all just teasers. And beyond the most recently completed “Raft” arc, along with the “Troubled Mind” storyline between issues #7-9 it seems like this entire series has been a continuous set of teasers involving people putting two and two together about this newer/meaner Spider-Man, the rise of the Green Goblin, and Otto’s out-of-control Hubris. Slott is entitled to build the story at the pace he sees fit, but for an issue like #14 where so much crazy stuff seemed to be happening, from an overall developing the larger arc of this title standpoint, there seems to be a lot of jogging in place. Slott has about 40 of Chekov’s guns locked and loaded, and to be honest I’m getting very impatient about the fact that he hasn’t fired any of them yet. It’s time he considered doing that because the pacing of this series is all over the place right now with very little organic flow. Not to mention that I’m getting the sinking suspicion that some of these Chekov’s guns are loaded and may never fire by the end of this play. And that’s just bad storytelling.

That’s not to say there weren’t moments of both comedic and overall superhero comic book brilliance in this issue. Kingpin’s sacrificial body double, who’s just sitting in a locked room of Shadowland eating junk food and playing video games was a stroke of genius and amazing satire about the age of real-life terrorism where folks like Saddam and Osama always seemed to travel around in triplicate. The fact that Fisk’s body double met such a gruesome end pages after being introduced was probably about as glamourous as an exit as he could ask for. 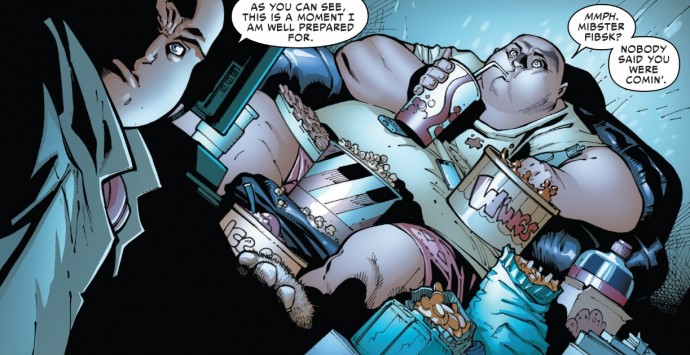 As I’ve said on countless other occasions the past 7 months or so, I have full faith in Slott. I trust in his ability to craft a long-term story that answers the majority of the lingering questions it poses to readers throughout its duration. But I also worry if Otto’s ballooning hubris can serve as a cautionary tale for all of the creative and editorial forces behind the direction of Superior Spider-Man. As of right now, the title is selling good, and the wave of Peter Parker-centric titles coming out in a few months will go a long way towards satisfying that segment of the fan base that still won’t embrace the superior status quo. But the time is getting nigh for some plot points to move forward or it’s going to feel like Superior Spider-Man is all splash and no style.