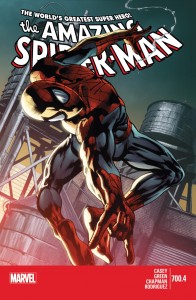 While the two part “Black Lodge” arc, which concluded in Amazing Spider-Man #700.4 last week, is never going to find a place on any of my “best ever” Spider-Man story lists, there is something about writer Joe Casey’s handle on the Spider-Man character and his universe that makes me wonder why he’s never gotten a real chance with the Web Crawler during his lengthy career. He certainly could have fit right in during the “Brand New Day” era of rotating writers on Amazing Spider-Man (which I’m convinced is when “Black Lodge” takes place) and if not then, I would be absolutely fine with him on a Spidey “B” title in the future (I’m assuming you’re going to have to pry away whatever the flagship title is from Dan Slott’s cold dead hands).

As I mentioned during my post on the first part of this story, “Black Lodge” introduces a really interesting concept to the Marvel Universe – an “underground” medical center that treats the world’s supervillain population – all while putting Spider-Man/Peter Parker in a situation that feels totally appropriate for a character that is known for his terrible luck/ability to overcome his bad luck. 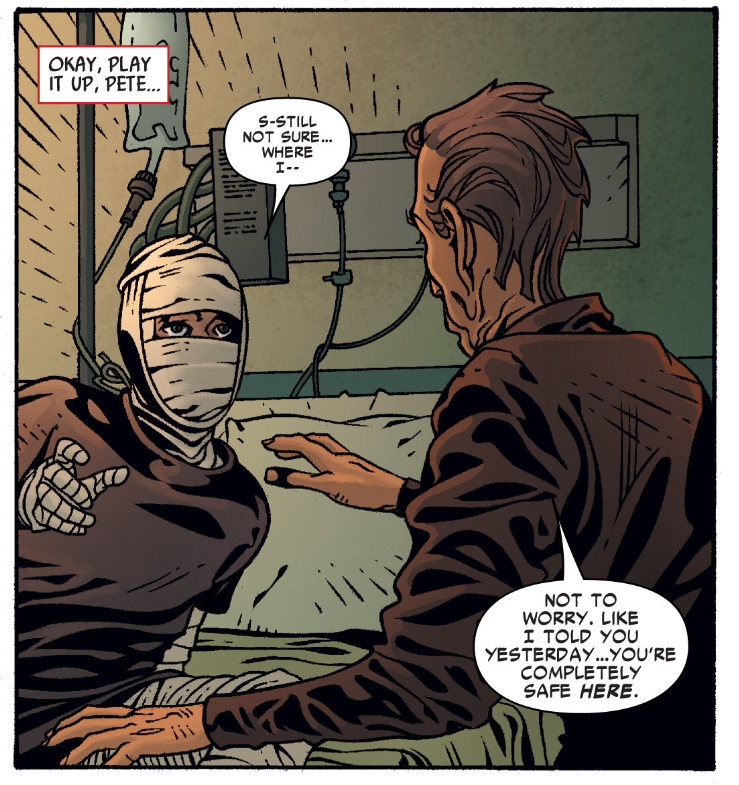 I’ve heard some valid complaints about the overall unsettling circumstances behind how Spider-Man found himself inside the “Black Lodge,” namely getting burnt beyond recognition during his battle with Firebrand. While Spidey does have a healing factor, it’s never been on the level of someone like Wolverine, so one of the questions I saw raised was how did Peter even survive these extreme burns from Firebrand. It’s a great question and one I probably should have stopped to think about a bit in my previous write-up.

I guess I was able to overlook the plausibility of this plot device because Casey makes it pretty clear early on in ASM #700.3 that the “Black Lodge” works on some high level injured supervillains cases AND that the doctors and nurses who work at this facility are very good at their jobs. Spidey’s burns are extreme, but if these guys are capable of saving someone who just went 12 rounds with the Hulk or Thor, I imagine that their life-saving abilities combined with Spidey’s limited, but still existent healing factor would be more than enough to keep him breathing and on the road to recovery after a few days/weeks at the “Black Lodge.” 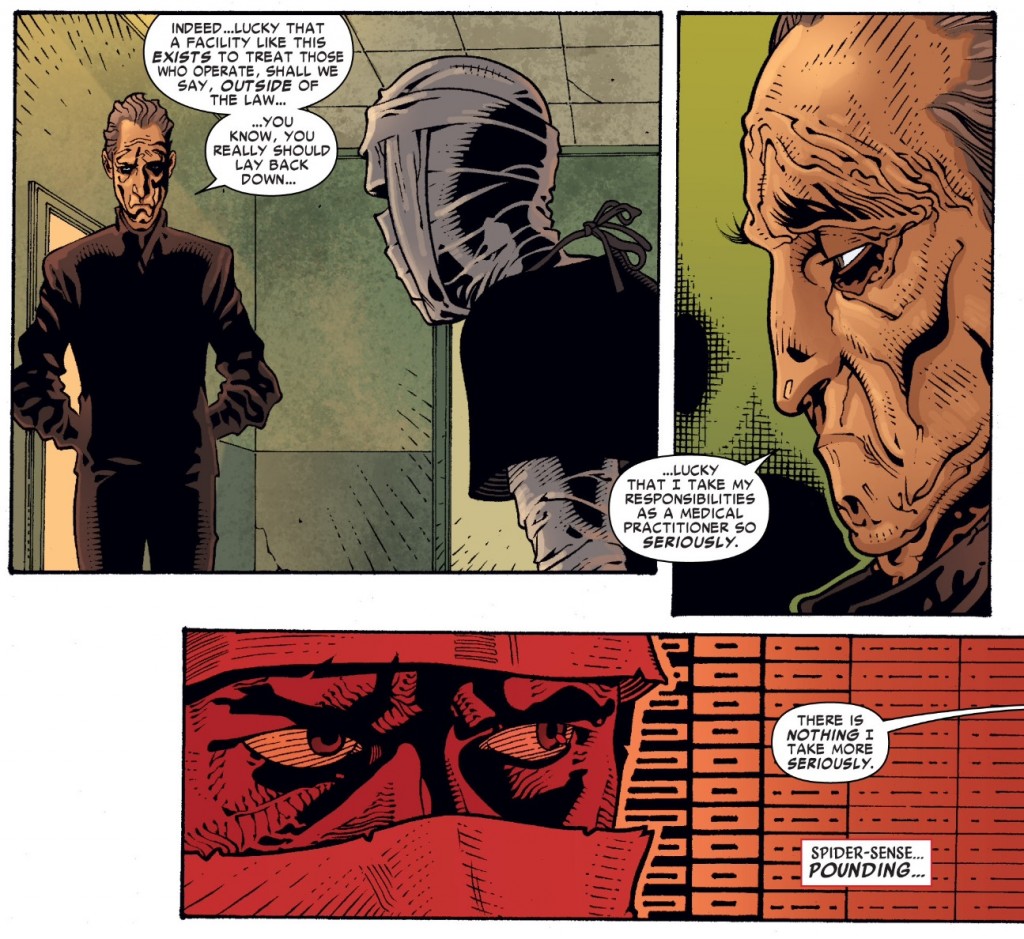 So with that plot contrivance explained away by yours truly, I’m able to focus on some other details that I liked about this issue. For one, it’s just a small little thing, but I really appreciated how the “Black Lodge’s” head surgeon tells his staff to continue treating Spider-Man, despite the fact that his cover has officially been blown. After all, while these folks may support the supervillain community during their most vulnerable times, they are still doctors, which means they have an oath to stick to when it comes to doing everything they can to help their patients. 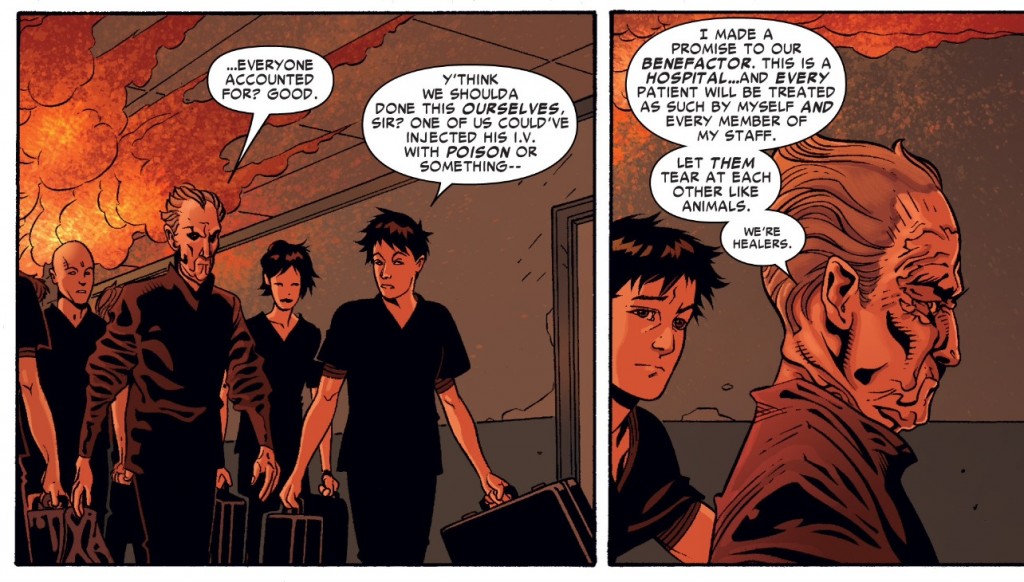 It ends up being an important plot development, because it ties-in to how Spidey is able to survive the “Black Lodge” once he’s under attack from more bonafide supervillains (if that’s what you consider the likes of Eel, Pff Adder and … I’m guessing Flying Tiger). 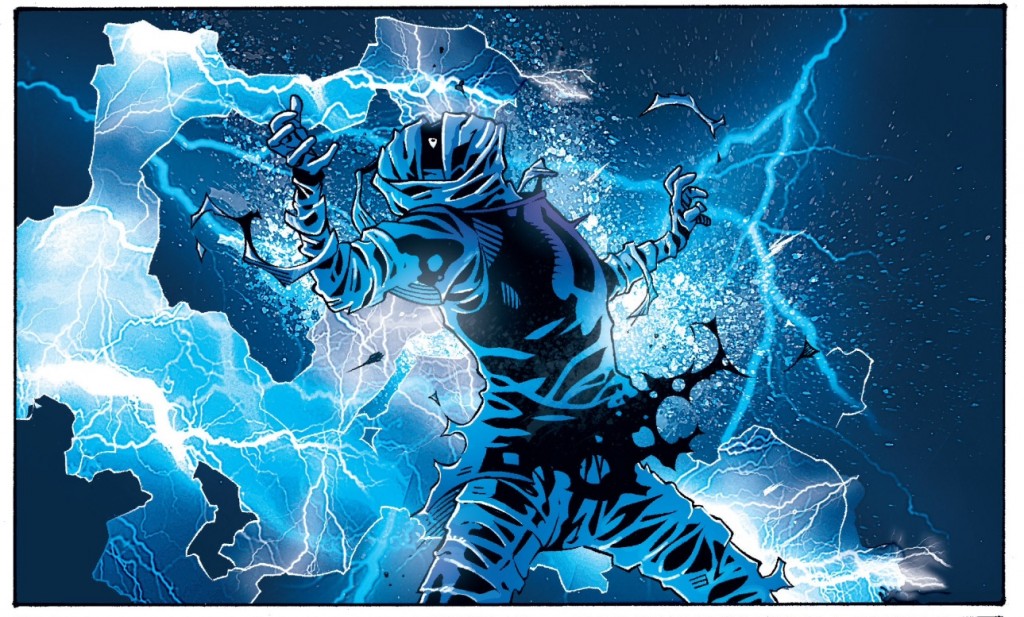 And I’m going to forgive the fact that Spider-Man is able to survive these attacks despite still  being badly hurt and in bandages (I  guess for those of you who obsess over costume choices, we can now add Tim Green’s “Mummy” Spider to the ranks of Ron Frenz’s “Amazing Bagman”) because: A) that’s just what Spider-Man does and B) he’s fighting a wannabe version of Shocker/Electro, a guy in a Tiger suit, and a guy who vomits. If Spider-Man was locked in the “Black Lodge” in his condition, had doctors trying to poison or kill him, and had to take on Rhino and Sandman, I’m going to guess that things would have gone differently.

My ability to gloss over some of these potentially troublesome developments all ties back to just the general positive vibe I got from Casey’s writing. It’s hard to pinpoint the exact reasons that justify my opinion, but I like what I like and this is something I liked. The story felt well-structured, it felt true to the character, and it was a nice mix of token Spider-Man humor and typical comic book superhero melodrama. And hey, it’s a scene of Spider-Man saving the bad guys again. I missed those! On a totally unrelated note, I did find it interesting that the comic started off with a “I bet this doesn’t happen to Human Torch” line from Spidey, which mirrors how Spider-Man Frost begins (a joke that wasn’t sanctioned or well-received by the comic’s author, David Morrell). Was there some kind of sale on “I bet (insert hero here) doesn’t have days like these” jokes at the boutique where Marvel editors go when they need to beef up the collection of inventory stories that they are pumping out one after another during the holiday season?

I am less impressed with the issue’s “B” story, “Three O’Clock High” by Clay McLeod Chapman and Javier Rodriguez just because it comes across as a heavy-handed attempt by Marvel to address the very serious issue of bullying. I think the tone of the story is very glib considering the physical pain the protagonist Casey Mitchell endures from his tormentors and its climax basically puts Casey in a position where he is going to be beat within an inch of his life (or worse) if Spider-Man doesn’t show up in the nick of time and teach him that words matter more than fists. 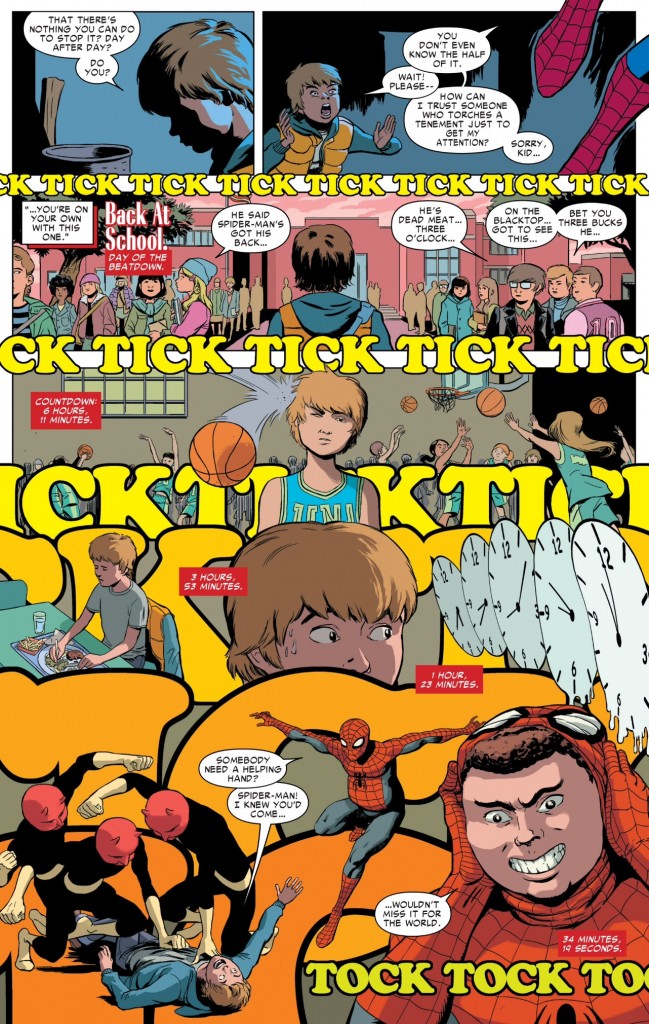 I’ll give Chapman and Rodriguez and “A” for effort for attempting to address an important issue, but I think it’s also pertinent for people who are reading out there to know that if they’re in a position where they truly fear for their physical well-being, they should probably report this bullying to proper authorities, and not attempt arson in hopes that their favorite superhero will show up. In an era of school shootings and teen suicides – many directly or indirectly caused by bullying – I think it’s more important for kids to know that there are responsible adult authority figures out there who can help them and will take their concerns VERY seriously if reported. This isn’t the “old days” anymore where the worst consequences that would come out of  a bully situation was some kind of atomic wedgie.