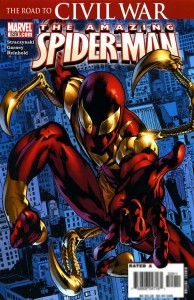 I often wonder what my appreciation for Iron Man/Tony Stark would be without Robert Downey Jr.’s incredible (and funny) portrayal of the character in the 2007 film. Up until then, I had viewed Iron Man as a hero who was more fitting for the DC Universe – a man representing the middle-aged and upper crust financially … a less sympathetic version of Batman/Bruce Wayne whose flaws stemmed more from lack of self-restraint than anything else.

I didn’t read many Iron Man comics as a kid, and the bulk of my exposure to the characters came via the Avengers and major Marvel events like Secret Wars (where it was Rhodey Rhodes, not Stark inside the suit anyway). I was unfamiliar with Iron Man’s famous arcs and trademark villains. I’m also fairly certain that I was initially unimpressed with Amazing Spider-Man’s “Mr. Parker Goes to Washington” arc, where Stark takes on Peter as his second banana during a hearing for the Superhero Registration Act (a precursor to the “Civil War” arc), despite the fact that it marked the debut of a new costume for my favorite Marvel superhero (courtesy of, ‘natch, Stark).

Downey changed everything. Up until last year’s Avengers spectacle, Iron Man remained my favorite Marvel comic book movie – yes, even moreso than Sam Raimes’ Spider-Man 1 and 2 (as far as I’m concerned, the third movie doesn’t exist). And I think a major reason why I loved the film so much was that it made me see a nearly 50-year-old superhero in an entirely new light. It inspired me to go out and read “Demon in a Bottle,” and “Armored Wars,” and “Doomquest.” Sure, the sequel wasn’t as good as the first, and who knows where the third movie stands in the pantheon of comic book movies after it opens this Friday, but that’s all immaterial since I’m now a huge fan of old “Shellhead.”

This change of heart has obviously allowed me to read Amazing Spider-Man #529-531 with an entirely new perspective. And needless to say, I enjoyed it. It’s probably my second favorite arc in J. Michael Straczynski’s early/mid-2000s run. Whereas I initially was uninterested in seeing a Spider-Man/Iron Man team-up because I didn’t want this boring, 40-something drunkard playboy making a mess of my Spidey comic, I can now look at the relationship between Tony and Peter as sincere and father/son like (Peter even jokingly calls him “dad” while demonstrating some of the new Iron Spider technology).

The two characters actually make sensible superhero companions – and Starks says as much in ASM #529. Both are scientists and while Stark’s powers are almost all exclusively aided by technology, Spider-Man’s web shooters remain one of the Marvel Universe’s technological wonders of the world. Stark, of course, is going to respect someone of Peter’s intellect, and Peter would be insane not to be awestruck with someone as tech-savvy as Stark.

And of course the mentor/mentee aspect of the relationship can not be ignored. The deeper you dive into Stark’s character, the more you see, like Peter, most of his deepest wounds are self-inflicted. Both Spider-Man and Iron Man subscribe to the “even superheroes can make mistakes” school of thought. But as the younger of the two, Peter has maintained an innocence and an idealism that Stark has since put behind him. This of course becomes pertinent in the arc’s conclusion in ASM #531. 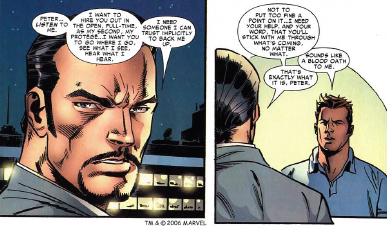 But needless to say, Stark is a guy who’s seen too much, and has done too much, whether it’s his alcoholism, betraying his long-time friend Captain America/Steve Rogers during “Armor Wars,” or leading a gang of rogue Avengers to kill the Kree Supreme Intelligence in Operation: Galactic Storm. Peter was obviously capable of settling down into a monogamous relationship with MJ, while Tony still carries himself around as a playboy. Either way, their similarities make Peter and Tony sensible bedfellow, while their differences are stark (!!) enough to create a compelling dynamic in the context of a story that focuses exclusively on the two of them. 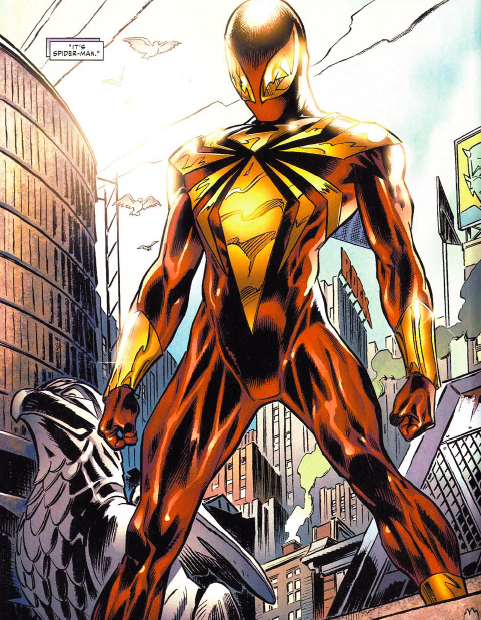 Adding the ability to glide, in addition to using his webbing to swing, allowed Spider-Man to fight crime more efficiently. And the infrared vision is a sensible new toy for any character that compares himself to a spider. It’s a crying shame that Marvel and JMS have an ongoing beef – especially over Straczynski’s opinion of Spider-Man since his departure from the title – because is there a better time than now, with Doc Ock assuming Spidey’s identity to resurrect the additional appendages that Stark built into the Iron Spider costume? The first thing I thought when I saw that advancement is “why isn’t Spider Ock using these things?” Of course, that would also mean Marvel would have to reintroduce ideas from the period immediately preceding the “Brand New Day” status quo shift, which they hesitated doing for storylines in the core Spider-Man title. However, with Scarlet Spider now acknowledging “The Other’s” powers, I guess there is evidence that the ice is melting a bit on that front.

So it’s funny what time, and a phenomenally cast movie can do for one’s perception of a superhero. When I was planning out my future posts for Chasing Amazing a few weeks ago, I knew I wanted to write something about Iron Man this week due to the release of Iron Man 3, but was struggling to think of an appropriate issue or arc that demonstrated how my opinion has changed on Tony Stark vis a vis Spider-Man in recent years. ASM #529-531 is unquestionably that storyline. Check in this Thursday for my thoughts on ASM #530, and I’ll wrap up the “Mr. Parker Goes to Washington” arc with a post on ASM #531 on Friday.

This is the first part of the “Mr. Parker Goes to Washington” arc. Click here for Part II/III