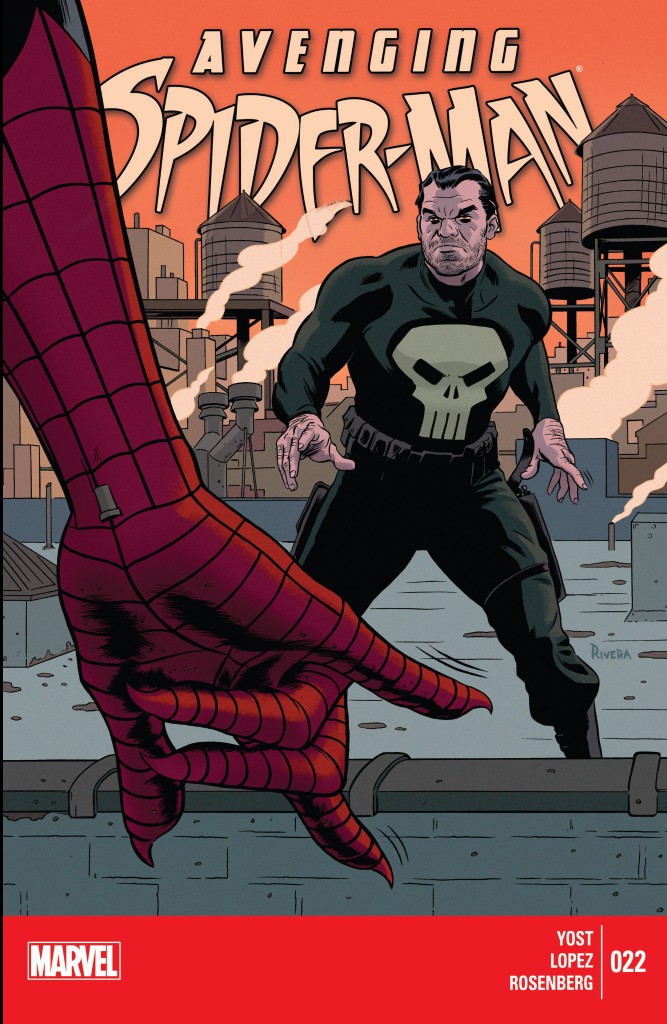 I’ve been pretty rough with my criticism of the last two issues of Avenging Spider-Man so you have to imagine how skeptical I was when I saw that the fate of series’ final issue before Avenging transforms into Superior Team-Up in July rested solely on the sociopathic shoulders of the Punisher.

I recently got myself into a bit of trouble with the readers of CBR’s Comics Should Be Good blog, where I pen the 90’s-centric “Gimmick or Good?” column, when I ripped apart John Romita Jr. and Chuck Dixon’s Punisher War Zone #1 – a comic and series that has come to be revered by long-term Punisher fans. I was flabbergasted by the negative reaction the piece received, in large part because I viewed it as just another cookie cutter Punisher story where the very unlikeable protagonist continues his senseless rampage on organized crime, pulling out all sorts of ridiculous looking guns and weapons in the process. The moral of the story was that the reader comments made me realize I had a negative bias towards the Punisher that made it nearly impossible for me to identify well-written stories about the character. And I honestly can’t argue that point.

So you take a title in Avenging Spider-Man that I thought has been struggling to find its voice since Superior Spider-Man switched the status quo up last month and add in a guest appearance but a character I really don’t like, and there’s no way that I could find some good things to say about Avenging Spider-Man #22, right?

And you would be wrong. If Chris Yost’s work on Avenging was an Olympic ice skating routine, I’d say he had a graceful start, fell down on his ass a couple of times with issues #20 and #21 and then managed to stick the landing on a triple axel jump with Avenging #22. There are still some clunky moments with Spider Ock’s dialogue and characterization that irk me, but overall, I think the issue uses Punisher perfectly and is a great example of a successful team-up in the “Superior” era.

When the Punisher was first introduced in Amazing Spider-Man #129, writer Gerry Conway made sure to demonstrate that his new anti-hero was paranoid and delusional, but simultaneously still capable of exhibiting some reason and rational thought. But as time went on, I think writers focused too much on Punisher’s psychoses. I would have to imagine if 1990s Punisher met Spider-Man under the circumstances where he first encountered the Web Slinger in ASM #129 (he was hired by the Jackal as a bounty hunter to gun down the “killer” of Norman Osborn/Green Goblin), our favorite blue-and-red superhero would have died in a thunderstorm of bullets by the end of that issue.

And naturally, when Punisher first appears in Avenging #22, he’s firing a sniper bullet at the fishbowl mask of the new Mysterio (dubbed not-Mysterio by Spider Ock, who was trying to corral the original, thought to be lost in Marvel’s “Ultimate” universe after the events of Spider-Men). If this were a Peter Parker Spider-Man story, it would have been another paint-by-numbers Spidey/Punisher team-up where Spider-Man is trying to apprehend the bad guy while simultaneously protecting him from being murdered by the Punisher, ultimately leading to a showdown between the hero and the anti-hero. But because we’re now dealing with a former supervillain inside the body of Spider-Man, there’s a totally new dynamic between Spidey and Punisher, and I’m glad Yost explored it and didn’t waste the opportunity Avenging #22 served up for him.

There are two great character moments in this issue worth spotlighting. First, there’s Spider Ock, thinking back to his earlier encounters with the Punisher as Doctor Octopus, and how he respects this anti-hero’s tactics of shooting to kill, despite the fact that he was occasionally on the receiving end of some of these confrontations. Then, there’s the Punisher confronting Spider Ock, mentioning how he heard what Spider-Man did to Jester and Screwball and Massacre (Marvel really needs to be consistent about whether or not Spidey murdering Massacre in Superior #5 is public knowledge or not), and warning him that the dark path Spidey is walking down is likely to “consume” him. 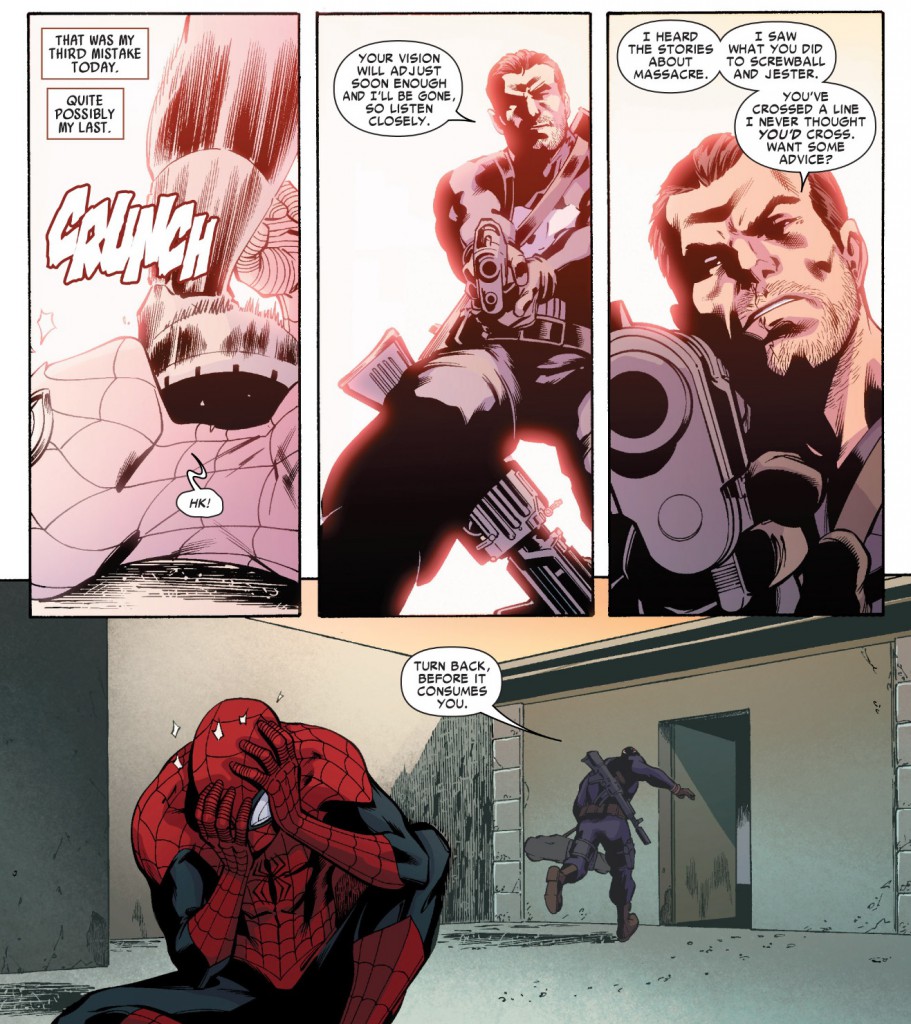 Spider Ock’s reaction to Punisher’s warning is classic arrogant Otto – as if anyone has the right to criticize his new “superior” methods to fighting crime that Parker “never had the stomach for.” It plants the seed for a fun little showdown at the end of the issue.

Then, only adding to Otto’s frustrations with Punisher, Spidey is on the verge of capturing Hobgoblin, further asserting himself as the dominant crime-fighting force in New York City, when the villain reminds him that the Punisher is still out there looking to permanently cut down fake Mysterio. It puts Otto in an impossible bind where he wants to maintain his reputation as the ace superhero who can take down a big fish like Hobgoblin, but he also wants to make sure he keeps Mysterio alive so he can continue his (still muddied) master plan of resurrecting the Sinister Six. Yost and artist Marco Checchetto perfectly capture Spider Ock boiling over with the Punisher when he webs him up and warns him to stay out of his business in the future. And the Punisher’s reaction to Spider-Man is pitch perfect: he logs the encounter in his “war journal” (I love this device and it reminds me of how the Spidey/Punisher encounters read in the Bronze Age) and notes that he’s both supportive and concerned for this harder-edged Spider-Man.

My overall satisfaction with the issue has me wondering if my criticisms with Avenging #21 and #22 had more to do with the S.H.I.E.L.D.-centric story than Yost’s actual writing. I’ve read a lot of frustration from readers in all corners of the internet about how Marvel is maybe overreaching in connecting the Avengers film with its comic book universe. The past two issues of Avenging certainly play into this issue with both Agent Phil Coulson (who was NOT a character in the comic book world before the Marvel movies) and a new Nick Fury who looks like actor Samuel L. Jackson making an appearance (Spider Ock even makes a Samuel L. joke in Avenging #21). Perhaps Yost’s writing was so rigid and off-putting because certain elements of the story were being forced upon him.

Either way, I’m now actually in a unique position where I WANT to see the Punisher live up to his promise to be “watching” the Superior Spider-Man in case he slips up and crosses the line. The Punisher is still a mostly one-dimensional character who never should have had four or five dedicated titles during the 1990s, but a deranged anti-hero works really well in concert with a supervillain turned hero like Spider Ock. I don’t know if Superior Team-Up is going to focus on more character interactions like the one we saw here, but at least Avenging ended its run on a high-note.