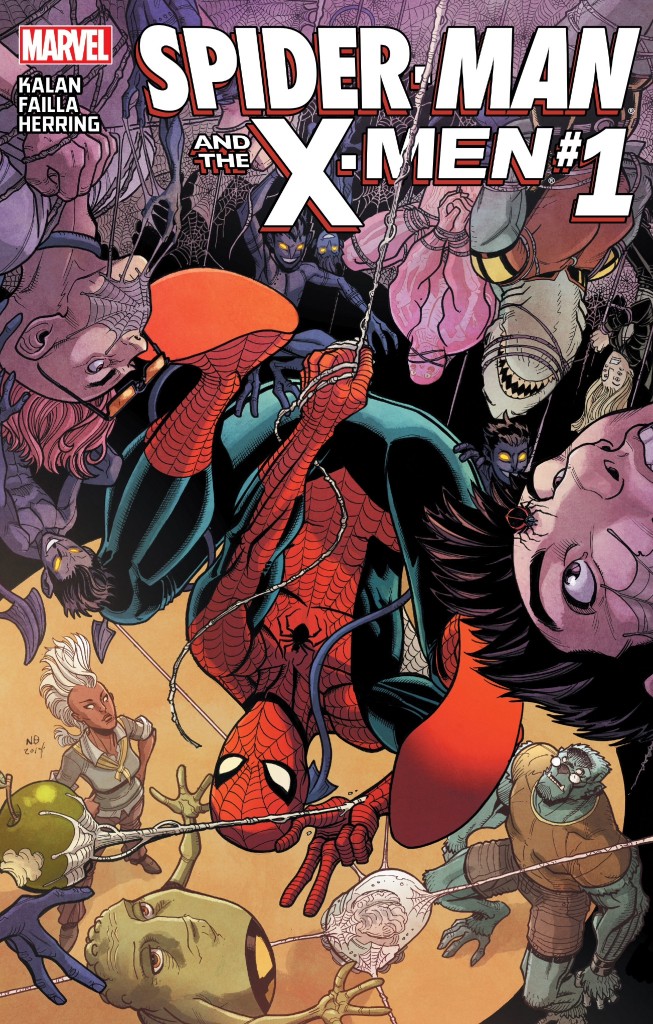 During the buildup to Marvel’s two big events that involve Spider-Man, “Spider-Verse” and “Axis” respectively, the company announced that the Web Slinger was going to star in another book that was also being spun off from a major “world changing” storyline. Due to the death of Spider-Man’s Avengers teammates and frenemy, Wolverine, Spidey was expected to take over Logan’s position teaching young, troubled mutants at the Jean Grey School for Higher Learning. And thus, Spider-Man and the X-Men was born.

I’m not going to lie – when I first heard about this comic, I didn’t understand what Marvel was doing outside of the potential money that could be made from bringing together two of their more profitable properties in Spidey and mutants. But this ain’t the 90s where these kinds of ideas were unilaterally green-lit, and  outside of the Wolverine relationship, which is still a rather new phenomenon in the grand scheme of things, Spider-Man’s connections to the X-Men universe are tenuous at best. Add in the fact that story was going to be scripted and penciled by two creators who have not worked extensively on Spidey – Elliott Kalan and Marco Failla – and I saw even less reason for this series to go forward. 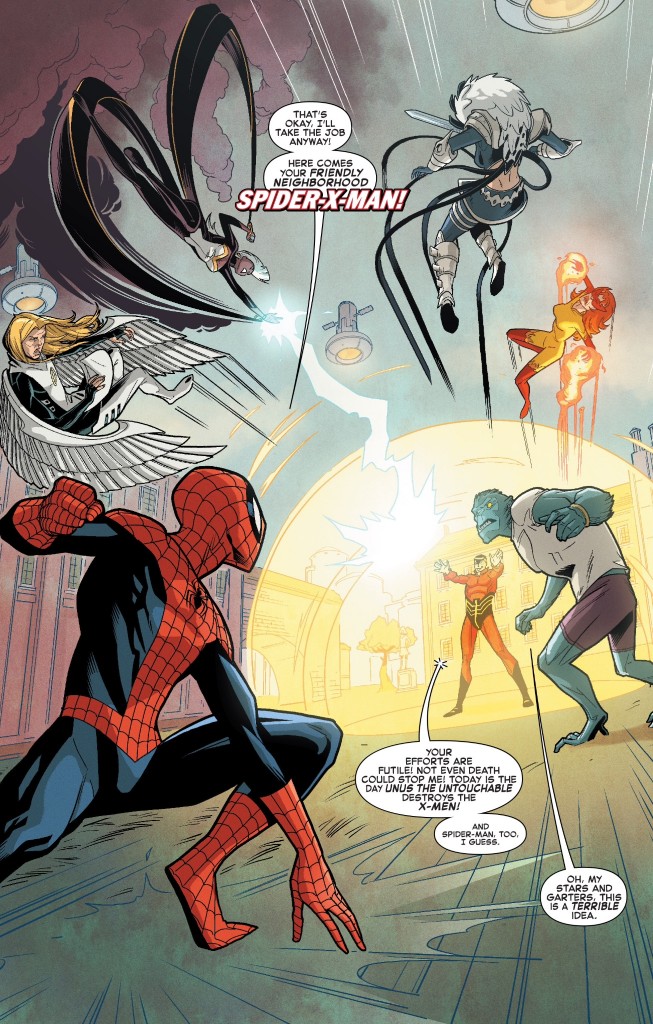 After reading Spider-Man and X-Men #1, I still can’t say with any degree of certainty that my cynicism has been alleviated. Kalan and Failla have crafted a decent enough comic book … it’s surprisingly far denser with  more moving pieces than I was anticipating from an otherwise superfluous comic book series. But I liken Spidey’s role in this series to a really delicious dessert that doesn’t have any salt in it – the flavors just don’t pop and we’re left with something that would have been enhanced considerably by people who had a firmer grasp of what they were doing in the kitchen.

In fact, I’d go as far as to say that Spider-Man felt quite replaceable, or at the very least, interchangeable with some other non-mutant Marvel hero – not a good sign when a character who’s name in the title could be swapped out with someone like Daredevil or Rocket Raccoon or Bucky Barnes and the heart and soul of the comic would still be in tact. 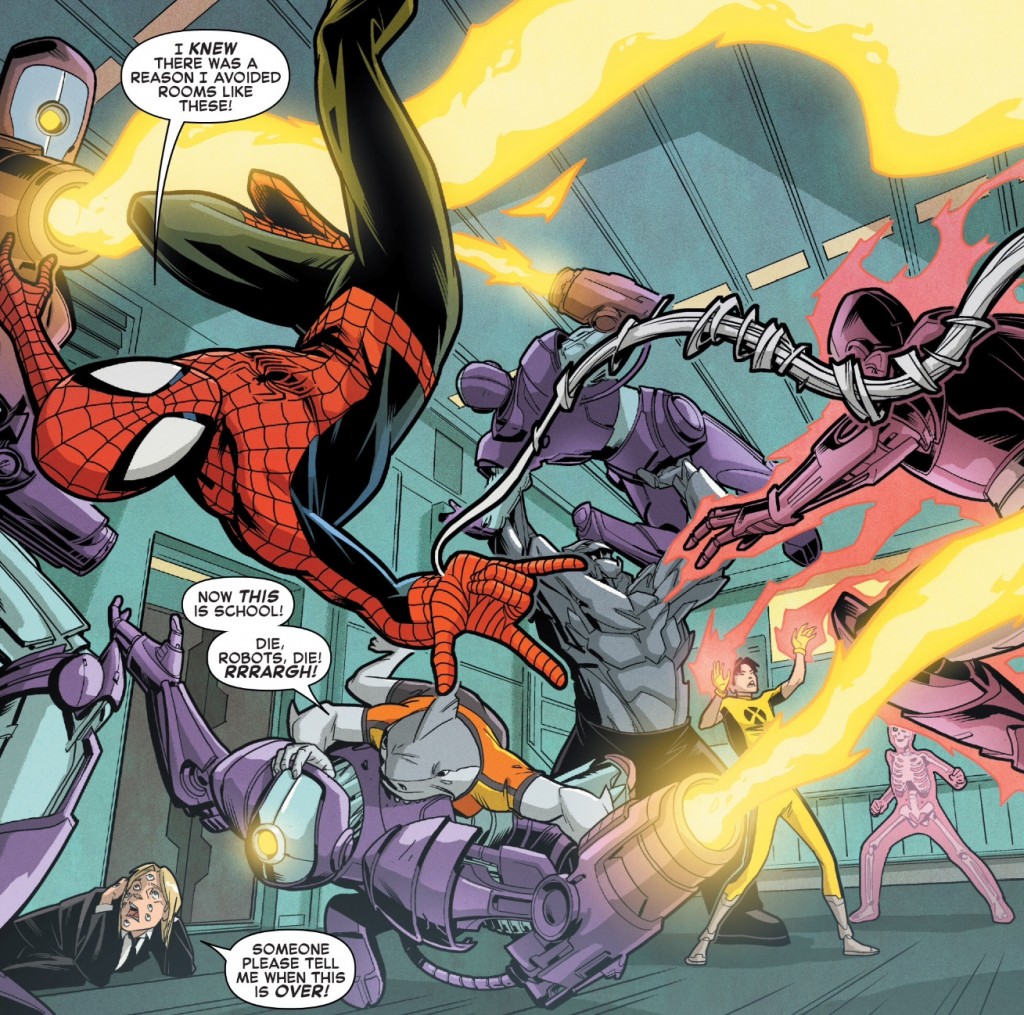 Plus, this comic feels ridiculously out of place being published smack dab in the middle of a Spider-Man storyline that involves the potential eradication of “every Spider-Man ever.” I get that Spider-Man and X-Men and every other Spider-Man title are probably edited by different people and thus, probably operate in different spheres within the “House of Ideas,” but to produce a comic that is so utterly oblivious to “Spider-Verse” is a tremendous oversight on Marvel’s part. Just wait a few months for order to be restored in Amazing Spider-Man before churning out yet another book with Spidey in it.

Meanwhile, the far more interesting story that could be told with this cast of young mutants is one that focuses almost exclusively on the emotional fallout that came from the loss of their teacher and mentor, Logan. We don’t need Spider-Man awkwardly bungling his way around a classroom to tap into the inherent drama that comes with a bunch of lost souls coming to terms with the death of their one potential beacon. 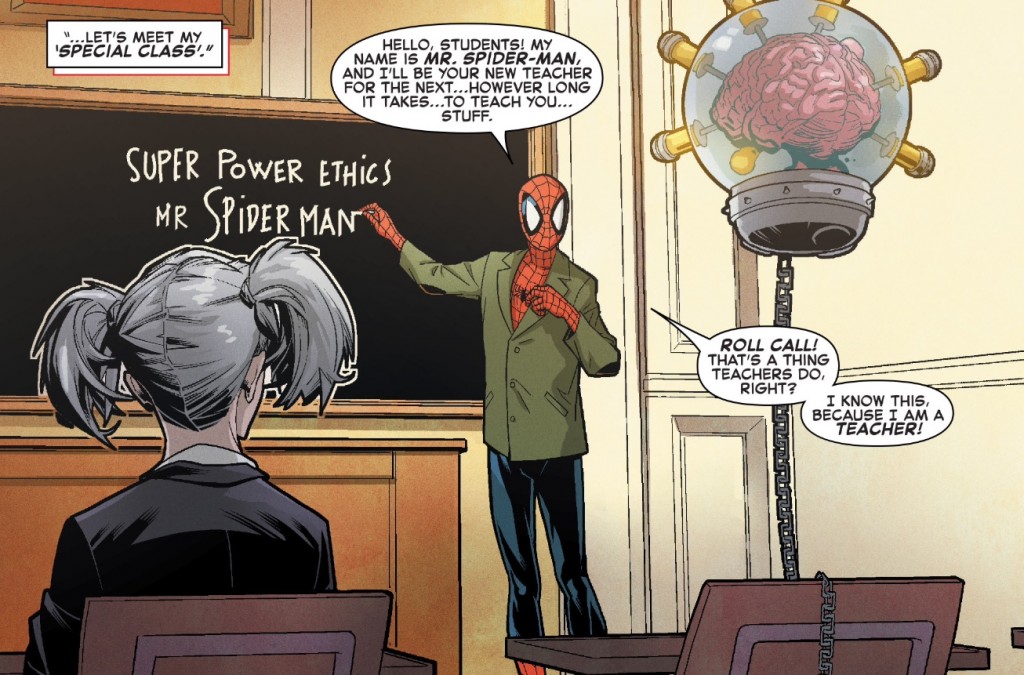 Even the comic itself spends an inordinate amount of time focusing on all the reasons Spider-Man really shouldn’t be co-starring in a book like this. Storm lists 17 reasons before Spider-Man shoots her down. And that’s when the realization hits that Spider-Man and X-Men is on pace to be yet another book that loves to emphasize how much of a clown Spider-Man comes across to the rest of the Marvel Universe. It doesn’t even acknowledge the fact that he spent time in a classroom teaching high schoolers during one of the more famous runs in Amazing Spider-Man history. Heck, there could have even been a reference to the otherwise forgettable Avengers Academy two-parter from 2011. 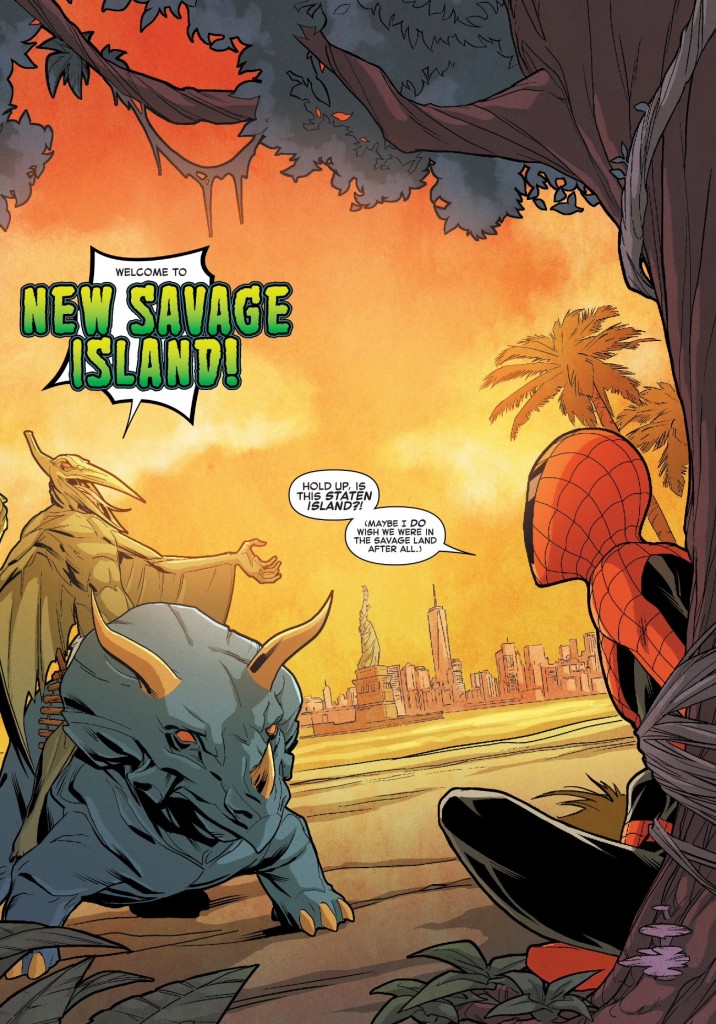 Bringing in an infamous Spider-Man rogue like Stegron ups my interest level ever so slightly, but still not enough for me declare this series must reading. As it is, I’ll probably give this book a couple of more issues to see if it can settle into a groove, and if I remain non-plussed, this will be the first Spidey book in years that I don’t pick up on a regular basis. Again, it’s not because it’s bad, but it’s because thus far, it’s a Spider-Man book in name only, and the few scraps that the creators do cling to regarding Spidey’s history and characterization are some of my least favorite things to read about him in a comic book series. And given the rather haphazard and tone deaf way this book went about being released (with hardly any fanfare or marketing behind it) and it makes me wonder if even Marvel is going to do everything it can to see this series succeed beyond a smattering of issues.