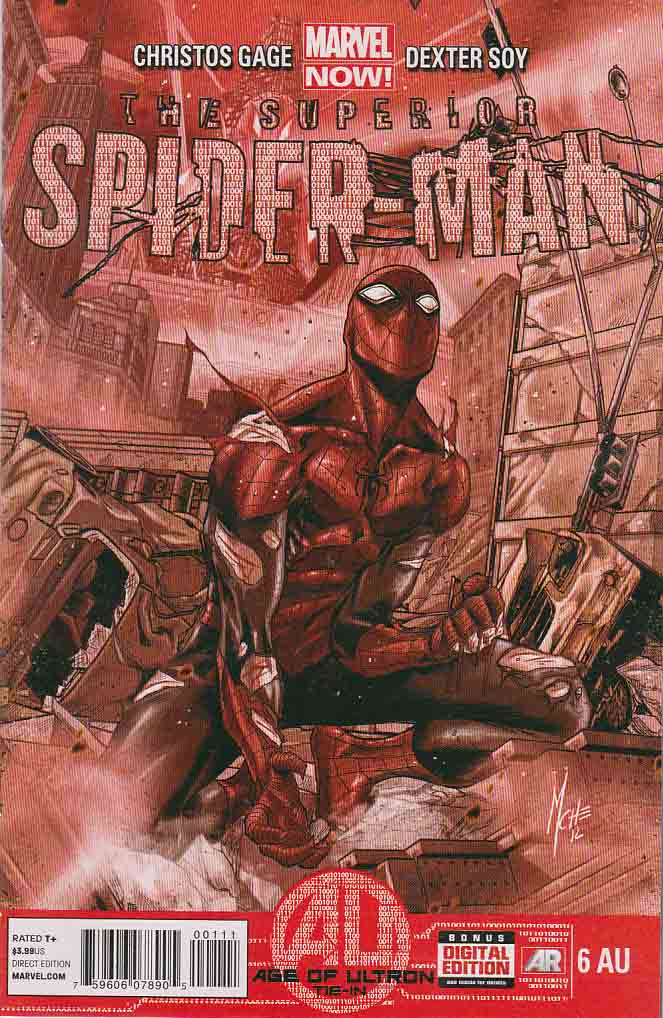 After apparently earning the ire of the notoriously fickle Reddit community a few weeks back after I submitted a post about my suspicions that Marvel had dropped the continuity ball with Spider-Man in the Age of Ultron mini-series, Superior Spider-Man #6U, an Age of Ultron tie-in, very plainly puts to bed any topic as to “who” was underneath the Spidey mask, Peter Parker or Doc Ock. That still doesn’t change my original thesis about Brian Michael  Bendis’ characterization of Spider-Ock being WAY off in those first two issues, though I also refuse to buy in to the Marvel sales-pitch that AoU is happening NOW, not in some kind of alternative/dystopian timeline. I guess that just makes me one of those independent thinker types.

But beyond the “I told you so’s” that are so commonplace on the interwebs these days, Superior #6U is a pretty decent tie-in issue to a larger Marvel event. Christos Gage gets another crack at the Web Slinger, and after being non-plussed with his Dan Slott relief work during the “Danger Zone” and “Avengers Academy” ASM arcs over the past two years, I felt he had a pretty compelling take on Spider Ock. Much like I’ve been saying about Chris Yost’s work on Avenging Spider-Man since the great Spidey status quo switch in January, Gage crafts a story here that is as much about Superior Spider-Man the character, as it is Superior Spider-Man the gimmick that has seemingly driven crazed Peter Parker loyalists into a rage. That’s not really meant as any kind of a shot on what Slott has been doing on the mothership title the past few months, but as a reader, I’m relieved all the same to have these secondary offerings to provide me with a little bit of insight as to what is motivating Otto Octavius as Spider-Man to be such a prick while simultaneously seeking redemption. 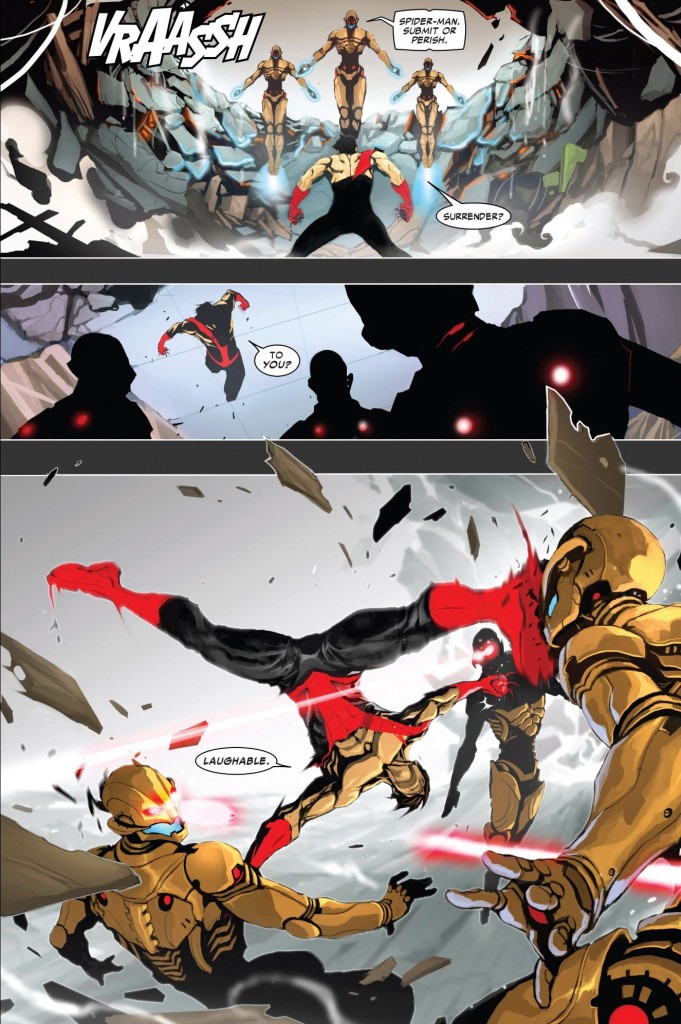 In Superior #6U, we revisit a plotline that’s been used fairly consistently on Avenging – Spider Ock needs to follow orders from a “higher ranking” superhero (in this case Iron Man) as the good guy’s try to take on the threat of Ultron, and of course Otto believes he knows a better way to deal with things. He mocks Peter’s ties to the Avengers, which heck, I’ve been doing for years now, and then hen thinking about his past experiences with Ultron, recollects one of the most memorable super-arcs of my childhood, the Secret Wars. So already, Gage is a rock star in my book.

But beyond the irreverent, Gage uses the tie-in issue to demonstrate a facet of Otto’s knowledge-based that really hasn’t been dealt with all that much in both Superior and Avenging: Doc Ock’s ability to control machines. And obviously when there’s a killer machine that’s trying to end humanity as everyone knows it (in a timeline that’s happening, NOW, right Marvel?) this is a very useful attribute to be focusing on. 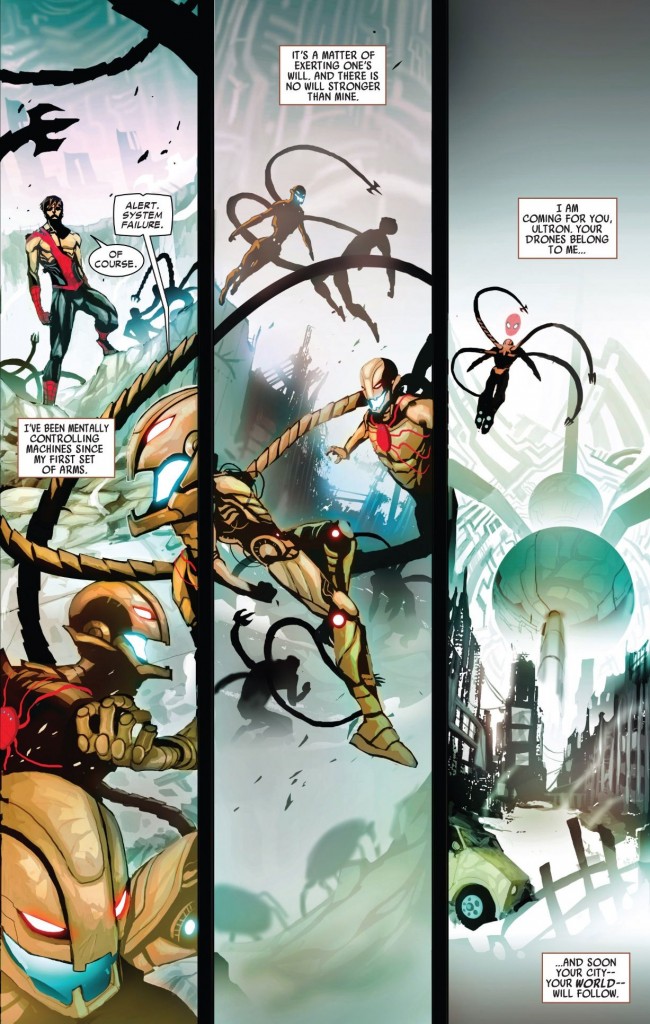 Of course, this is all a set-up for Spider Ock to fail at his mission. But it’s Spidey Ock’s reaction to his failure that makes this issue special. Superior #6U features a full-on admittance of guilt and regret from Otto unlike anything we’ve really seen from Slott or Yost’s characterizations thus far: “This is why Parker always won,” he says. “I treated my allies like lackeys. Extension of myself. They could never be more effective than I … only less.” 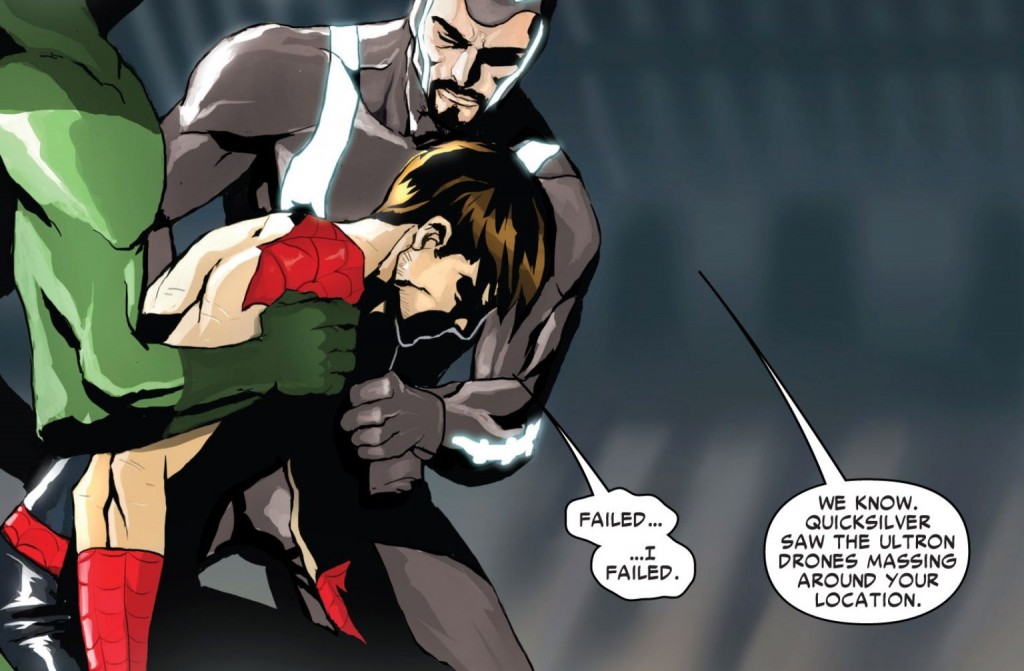 It’s probably fitting that Spider Ock’s realization comes when the situation appears so far past redemption that it’s basically meaningless. But that still doesn’t change a fantastic moment – and a needed evolution – of the character. Even if Marvel has no intention of bringing back Peter Parker any time soon (and after reading between the lines when the company talked about its “Superior Spider-Man month activities in July, I don’t think we’re going to be seeing Pete for a while), they still need Spider Ock to continue to grow into a more compelling character. His arrogance and hubris will only get so far, and speaking from personal tastes, I can’t see myself enduring this character for the long haul if he’s just going to be an insufferable *****bag to everyone he interacts with. That might be entertaining for a 5-6 issue arc, but certainly not for 20-30 issues worth of a bi-monthly series. The one thing that gives me pause in celebrating these developments too much is the fact that they took place in what has otherwise been a very insular mini-series thus far. I would maybe put more stock in the long-term impacts of Age of Ultron if Marvel hadn’t just gone and rebooted nearly all of their main series late last year, including creating new super-teams like the Uncanny Avengers.

On a final note about Superior Spider-Man #6U, I really hope this issue opens up some future work on the title from illustrator Dexter Soy. Without any disrespect intended towards Ryan Stegman, Humberto Ramos and Giuseppe Camuncoli, Soy’s “manga-esque” style throughout this issue is a sight to behold and creates an entirely new look and feel for the series. Ultimately, it probably wouldn’t work with Slott’s “cheeky” scripts, filled with wacky catchphrases and pop culture references, but if Marvel decides to give Gage another run on the title (and even a more permanent one), I hope they give Soy a call too because it would lead to some of the most unique art we’ve seen on a Spider-Man title in as long as I can remember.