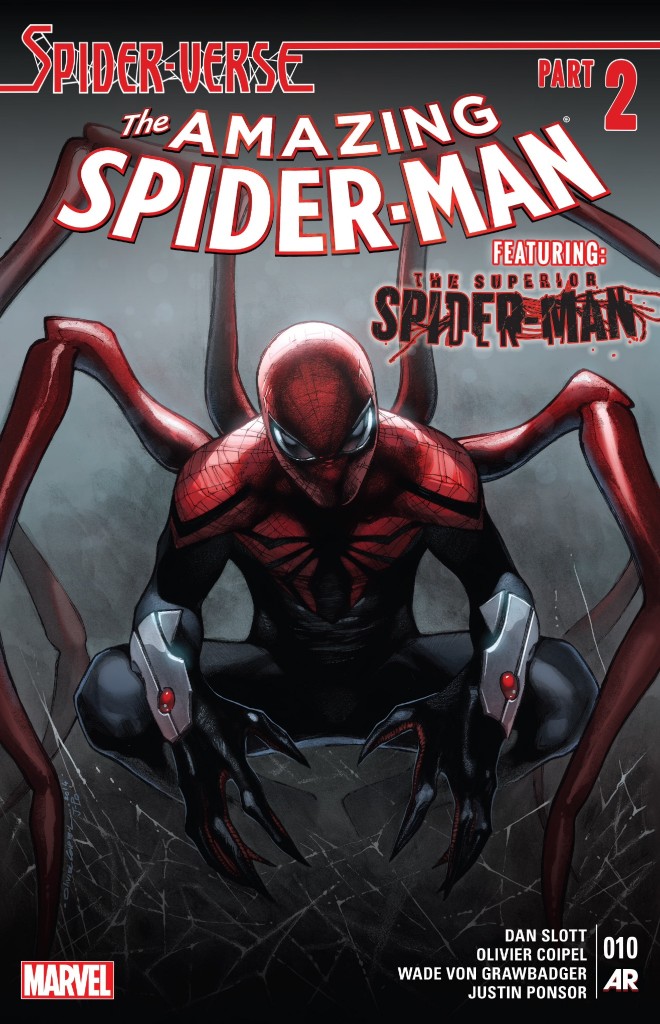 While it still leaps and bounds better than some of the issues we were getting prior to the onset of “Spider-Verse,” I can’t help but think of Amazing Spider-Man #10 as a bit of a step backwards in the quality department – especially when compared to the wonderful opening chapter we got in ASM #9.

ASM #10 is odd in that the issue is almost entirely filled with set-up, yet it’s also quite heavy on the physical action. The net result is a comic book that at times reads a bit shallow, lacking the heart and sincerity that was oozing from the pores of ASM #9.

In terms of the actual plot, the selling point of this issue is the full-fledge return of Doc Ock, the Superior Spider-Man. And unlike any of the other iterations of Spider-Man that “Spider-Verse” has depicted thus far, this is a Spider-Man that shares the Earth-616 with the “chosen one,” Peter Parker, but is only actually existing because he’s traveling from another time. 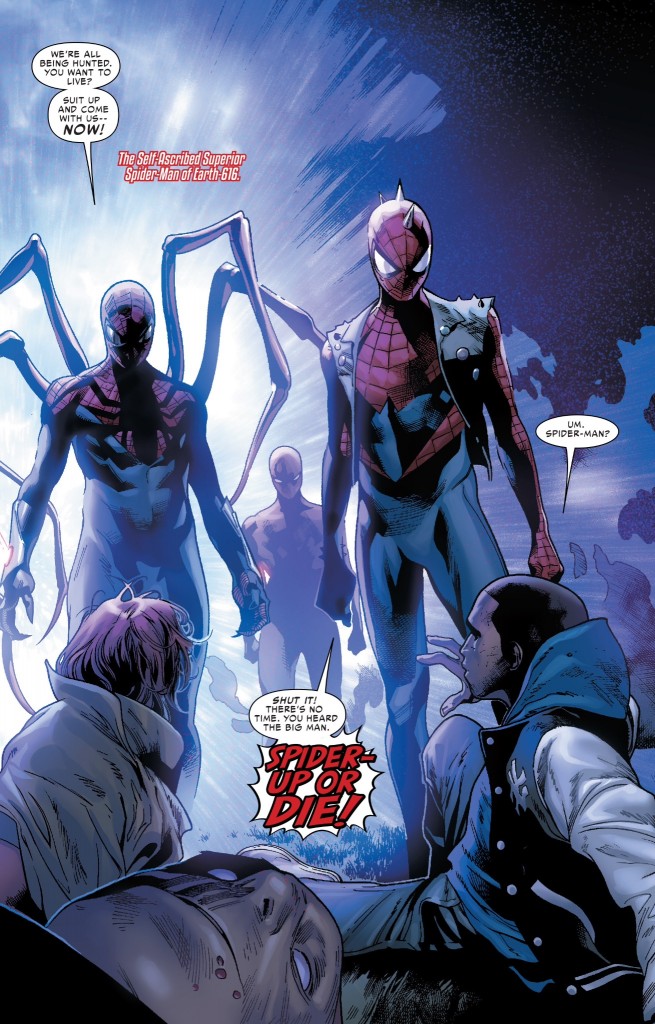 That last sentence I just wrote is precisely the kind of gobbley-gook I was hoping Dan Slott would steer clear from when we received our first “Spider-Verse” prologue in Superior Spider-Man #32 a few months ago. I understand that for some readers and fans, the whole concept of the multiverse and timeline jumping is something they can unilaterally accept and go with without any question or hesitation. But I still maintain that the strength of the narrative suffers when there are perceived inconsistencies. Thus far, the rules of “Spider-Verse” have included “every Spider-Man ever” and that has been explained away by noting that all of these characters are derived from their own parallel dimensions. And yet, here’s Spider Ock, there because, let’s be honest, it would be a wasted opportunity by Slott to do an event like this and not have Peter and Otto either side-by-side or nose-to-nose. The problem is, based on the previous set of rules, Otto really shouldn’t be in this story – he’s dead or disappeared or whatever. And rather than making him come from another parallel world where it just so happened that he Otto never relinquished his body to Peter, it’s instead explained away by “time travel.” When the chips are down, I’m not going to let these details impact my opinion of the overall story, but in the heat of the moment, it’s frustrating all the same. When a creator can bend the rules to service the story to his every whim, I think it can lead to sloppy, inconsistent storytelling. We’ll see where Slott goes from here.

Besides, I also thought the first meet-up between Otto and Peter was a bit of a letdown from Slott. Otto’s characterization here is more in-line with what we got during the first half of Superior Spider-Man, which could have potentially led to some very intriguing interactions with Peter post-ASM reboot. ASM #10 does in fact end with a very dramatic moment – Otto staking his claim as leader of the group despite not being the “chosen one” – it’s a moment that I think came about 20 pages too late. Where is Otto’s insufferable outrage regarding the apparent survival of his lifelong enemy, Peter Parker? Where is Peter’s anger and rage about seeing the man who murdered him in his full egomaniacal glory. Instead, Slott completely avoids the obvious confrontations with the characters, in favor of pushing more and more different characters through the turnstiles of the narrative. 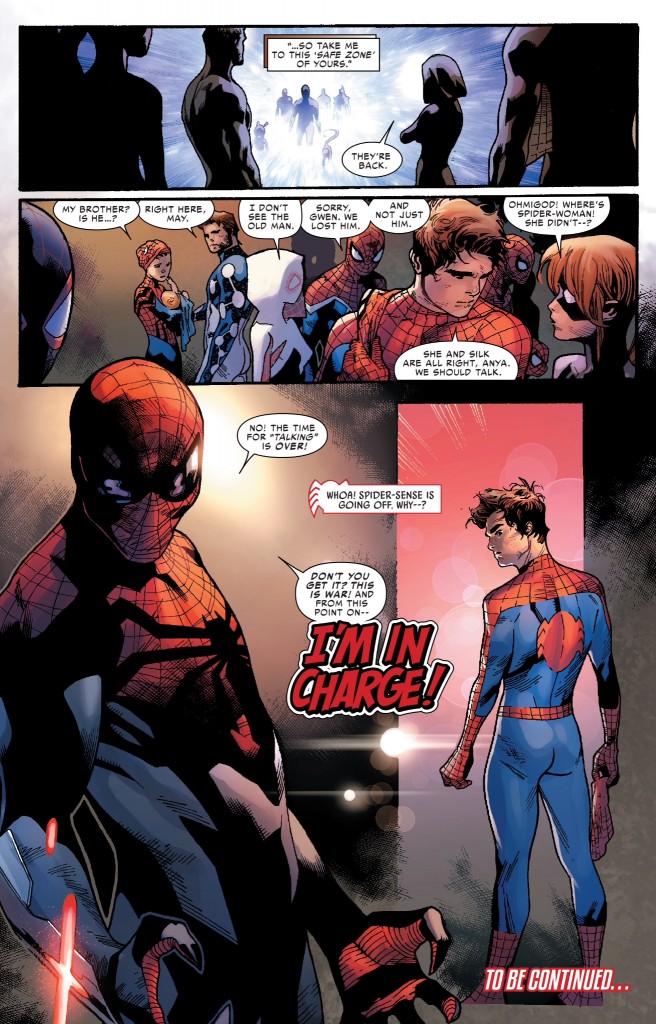 Unfortunately, even with all of these different characters being introduced both in this book, and all of the other associated spinoff titles, Slott feeds us a bit of information via the return of Ezekiel that all but warns the reader that only a select few of these guys and gals actually matter. With Ezekiel’s apparent death, Peter is told that as long as the Bride (Silk), the Other (Kaine, I’m guessing) and the Scion (the big mystery), survive the onslaught of the Inheritors, the Spider-army has a chance at victory.

That’s not to say we shouldn’t care about some of these other Spider-Man iterations, like Spider-Ham or Spider-Man Noir, but if I’m reading between the lines, I definitely think we, as readers, shouldn’t be getting too attached to any of them. 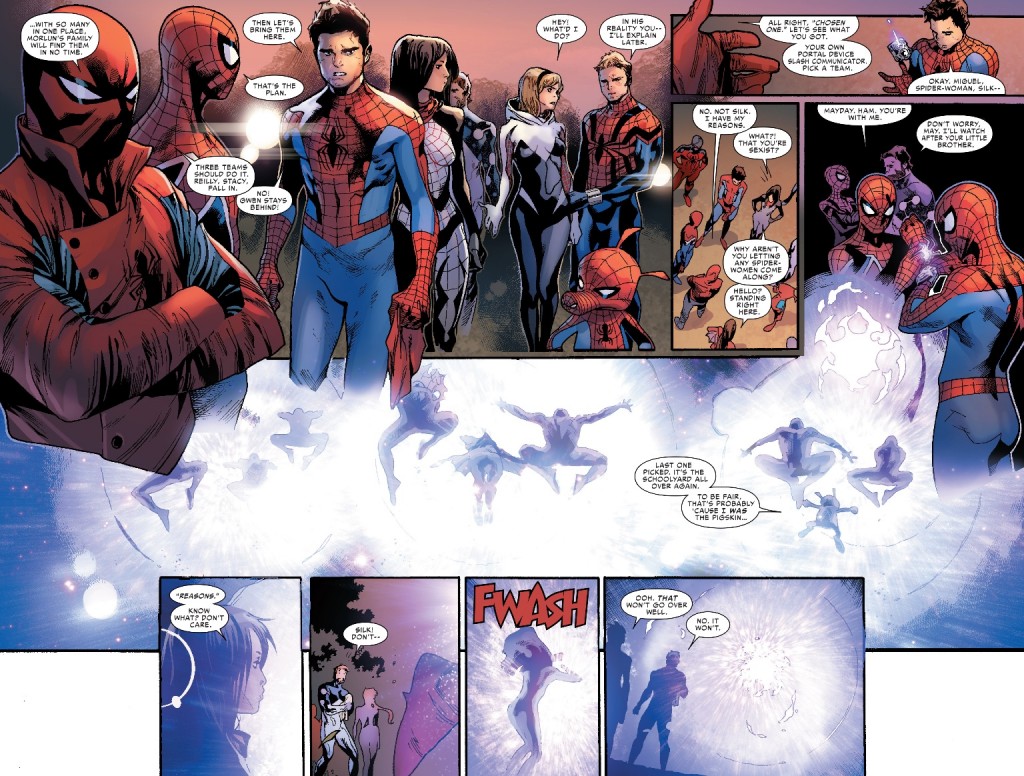 It was apparent from the get-go that “Spider-Verse” was going to have a high body count, but sequences like this only serve to make nearly everyone expendable and I think that can potentially cheapen the story. Especially when part of what I enjoyed so much about ASM #9 was how Slott was very clearly trying to give all of these individual characters their own voice and distinguishing features. He can obviously still do that, but now, out of mere Pavlovian suggestion, I’m going to find myself wondering how any of the plot impacts the Scion, Bride and Other. Sorry all of the remaining spider-characters.

Between ASM #10 and the relaunched Spider-Woman series (more on that later this week), there does seem to be a concerted effort to add some more weight to Silk’s character when compared to how she had been depicted in the bulk of her prior appearances. Making her aura or totemic powers (whatever you want to call) function as a lure for the Inheritors, thus making her a liability for the Spiders (and a scapegoat) is a fast and effective way to give Silk some sympathy and depth. Her irresistible urges vis a vis Peter still need to be refined in a way where they’re not always being played for laughs (because people uncontrollably wanting to have sex with each other is always funny in superhero comics) but Silk is looking less and less invincible with each passing issue, which I think is a critical development for a character Marvel is clearly banking on going forward. 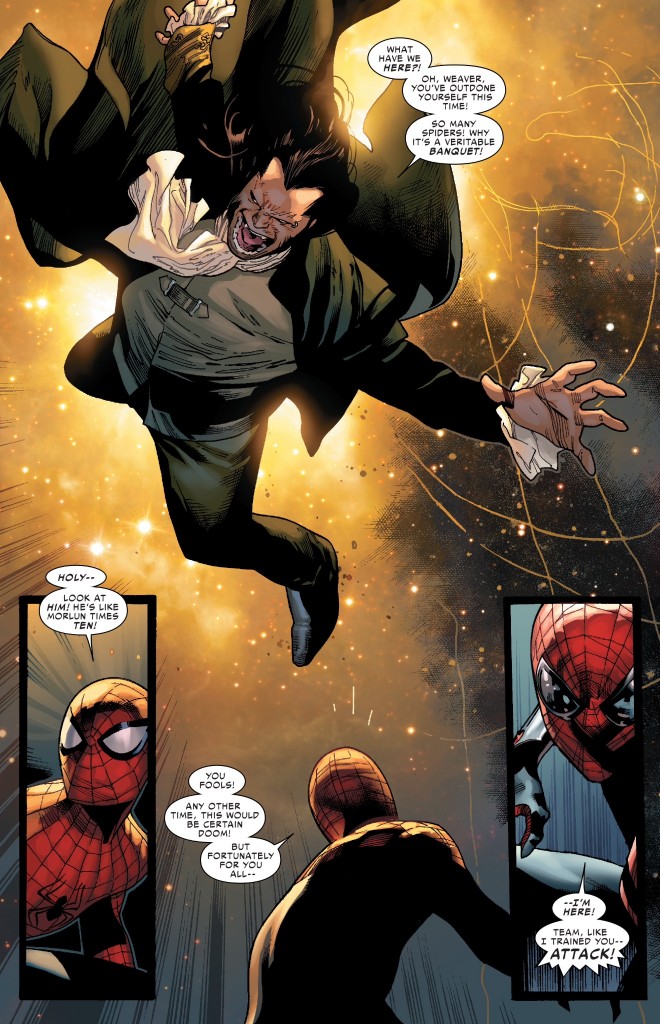 Olivier Coipel’s artwork continues to be a standout in this series, though the action-heavy sequences were sometimes bogged down with so many characters, even Coipel’s untouchable pencil-work couldn’t make these pages easier to follow. I get it that the plethora of Spiders is the gimmick of this story, but even on a visual level, I find myself caring far less about “Spider-Verse” when I sense the creators just trying to cram in as many characters as possible. I feel like I say this nearly every time I write about a Slott comic, but less can sometimes be more, even in something grand and epic. I know I can live without seeing a few of these obscure Spiders is the tradeoff is more character development with some of the key cast members.