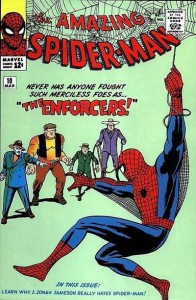 I’m always interested to look back at comic books from 40 or 50 years ago and see what has aged well versus what seems dated for the time. Amazing Spider-Man #10, the second issue in my much bally-hooed 30th birthday haul, features the first appearance of a gang of villains who definitely appear to fall in the “dated” category.

That’s no disrespect to the villains in question here, the Enforcers, or to ASM #10 in general. In fact, I’ve always had a legitimate fascination with this issue because of the relative obscurity of the featured villains. With their 10th issue, you would think Stan Lee and Steve Ditko would have introduced a nemesis that was grand in scale – and perhaps in their minds they did. With the Enforcers, and their mysterious leader, the Big Man, you technically get four different villains for the price of one. But when you consider the pantheon of all-time greats that debuted before ASM #10 – Doctor Octopus, Sandman, Doctor Doom, Lizard, Electro, Vulture – and then some of the super-villains who came immediately after – Mysterio, Green Goblin and Kraven – well … let’s just say that one of these things is not like the others. From a collectability standpoint, that certainly doesn’t raise the profile of the issue much, but speaking solely as a fan, I’ve wanted to get my hands on this issue because it serves as a portal into a different era of comic books. 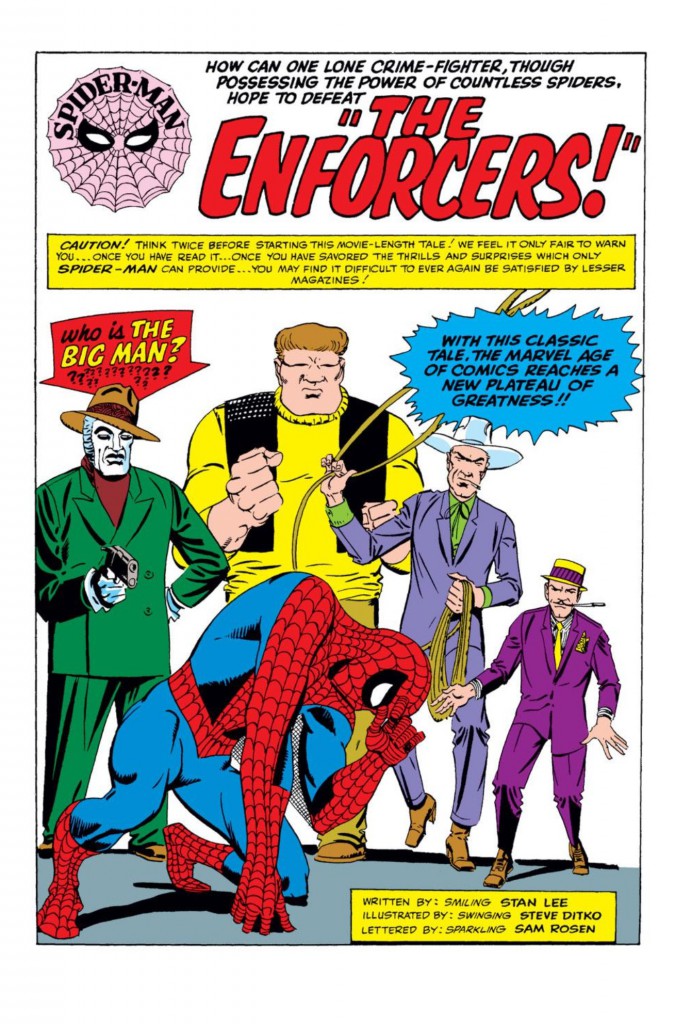 ASM #10 marks Spider-Man’s first entanglement with a legitimate organized crime group – mobsters if you will. But these guys don’t feel like the mobsters you see on television or in movies today, nor did they go on to have the illustrious comic book careers as such crime bosses as Kingpin. Instead, the original line-up featured three goons who each have different attributes – Fancy Dan, who was quick on his feet and knew some martial arts; Ox, predictably the muscle of the group; and Montana, who was handy with a lasso … wait? A lasso? Really? That’s the best they could come up with? To paraphrase Austin Powers, “honestly, who uses a lasso?”

While there is certainly strength in numbers, the Enforcers marked the first instance where I can remember Spider-Man taking on a villain and NOT thinking, “how is he going to overcome the odds.” I mean, could you imagine if Spider-Man wasn’t fast enough to outfox a guy who calls himself Fancy Dan? And when has a brute named Ox ever really succeeded in besting a superhero? Sure, he’d land a few heavy-fisted blows, I’d expect all Spidey would have to do to best Ox is say “your shoe laces are untied,” and the rest would be history. And let’s not get back to Montana. In the issues preceding ASM #10, Spidey was taking on scientists with mechanical arms, a man who could fly, a human lizard and perhaps the most powerful villain of all-time in Doom. It’s no surprise that the Enforcers would go on to be flunkies for more potent villains like the Goblin in future issues. It’s like Marvel knew right after they debuted that these three guys wouldn’t stand the test of time. 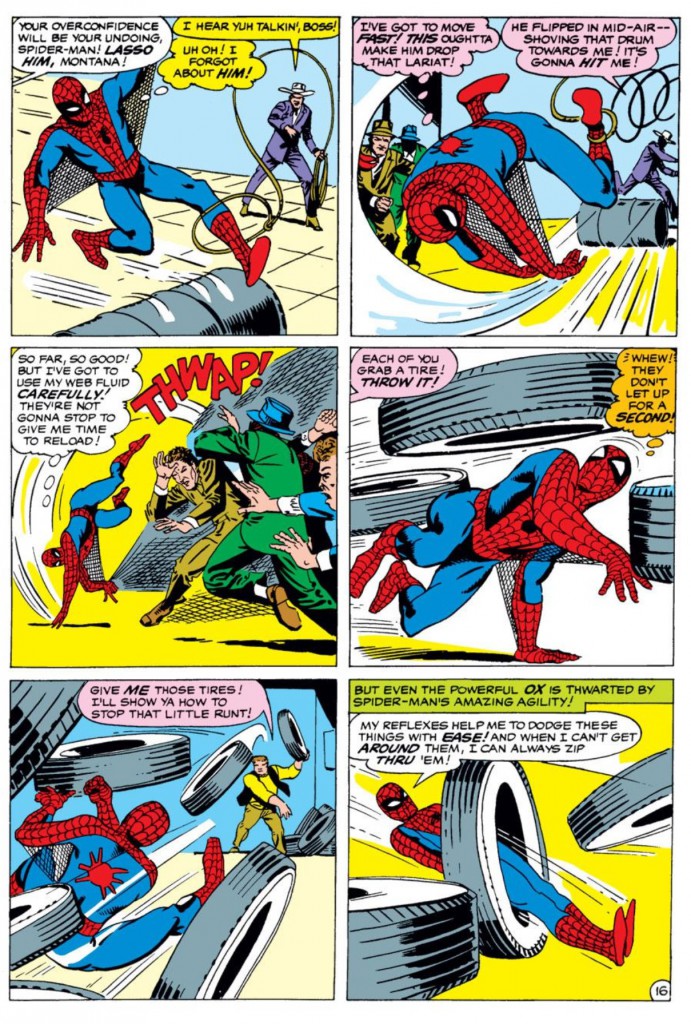 Of course, it’s worth noting that when the Ultimate Spider-Man series debuted more than 10 years ago, the Enforcers were brought back, this time as hired hitmen for Kingpin. That’s a characterization I would expect in the modern era of comic books, where people think of organized crime and picture the mafia, or a group of trained, cold-blooded assassins that could be procured for the right price. Not a group of guys who are going to dance around you, punch you and then lasso you up.

But I know I’m missing the point. In 1964, when ASM #10 first debuted, a group like the Enforcers was a perfectly acceptable opponent for a superhero. Part of what made Marvel so revolutionary in the 1960s with the introduction of characters like Spider-Man, Fantastic Four, Doctor Doom, etc, was that there were churning out comic books with an edgier, younger, hipper tone compared to their rival competitor, DC. With the Enforcers, Marvel was taking a token concept of a villain at the time – a bunch of bad guys who rob banks and organized floating crap games – and kicked it up a notch, the only way Marvel knew how: with unique powers and weapons, and catchy nicknames (despite sounding corny now). It just so happens that nearly 50 years later, the Enforcers concept doesn’t hold-up as well when compared to a guy like Doctor Octopus, who was a souped-up version of the comic staple criminal master-mind with a desire to take over the world.

Either way, thanks to my 30th, ASM #10 and its throwback-style featured villain-team is now a part of my collection. It’s a testament to the idea that not everything from yesteryear is necessarily “better” when it comes to comic books, but it’s still worth revisiting regardless.

Final Tally: 14 issues to go to complete the run.