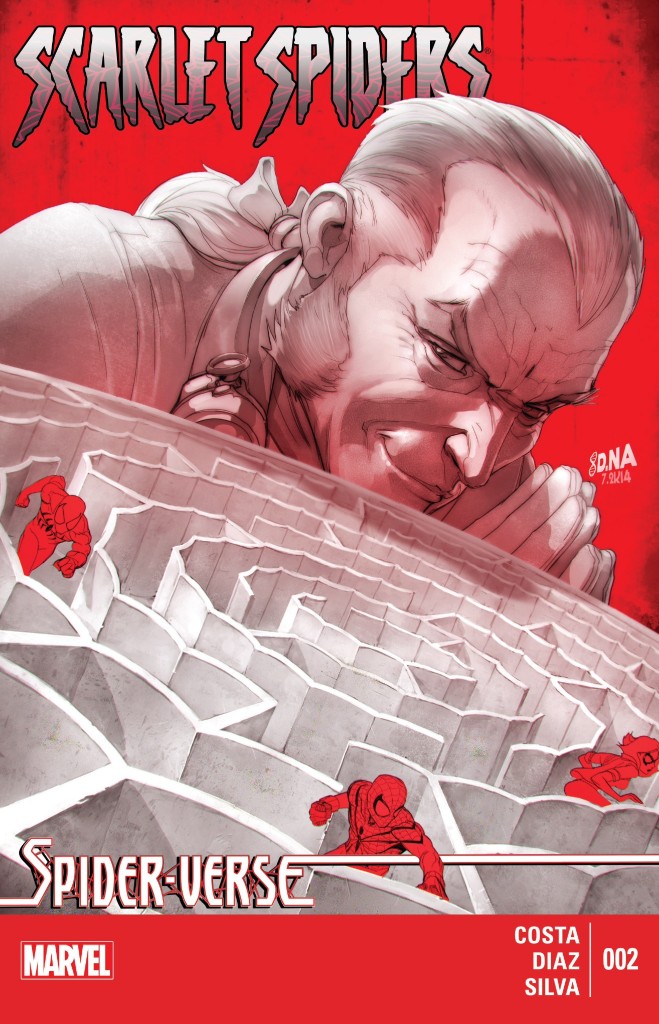 Two issues in the Scarlet Spiders miniseries from Mike Costa and Paco Diaz is shaping up to be a worthwhile complimentary piece to the larger “Spider-Verse” arc – with a narrative that comes across as being far more consequential than the fun but flimsy Spider-Verse Team-Up mini that came out the week before last.

I’m still having some issues with Costa’s characterization of the three main characters – Kaine, and alternate Spider-Ben, and Ultimate Jessica Drew (who is Peter’s clone in that universe) – though this time around my concerns stem more from some deliberate choices in the script, rather than the overall lack of character work that brought down Scarlet Spiders #1.

Similar to what transpired in at least some of “Spider Island’s” miniseries and spinoffs a few years back (most notably Venom and Spider Island: Cloak and Dagger), there’s some legitimate synergy between the plot driving Scarlet Spiders and the events in Amazing Spider-Man. Kaine, Spider-Ben and Ultimate Jessica are not out there on some random side mission that bares no consequence on how the army of Spiders fight off the insanely powerful Inheritors. Instead, the comic reads with a real sense of purpose. The trio’s quest to shut down the Inheritor’s clone factory will likely solve all of the Spider’s issues as it pertains to the drama that is currently driving “Spider-Verse,” but Scarlet Spiders #2, when read in concert with Amazing Spider-Man #11, certainly makes it appear that the success of the Spider-clones will be a key part of a larger victory. 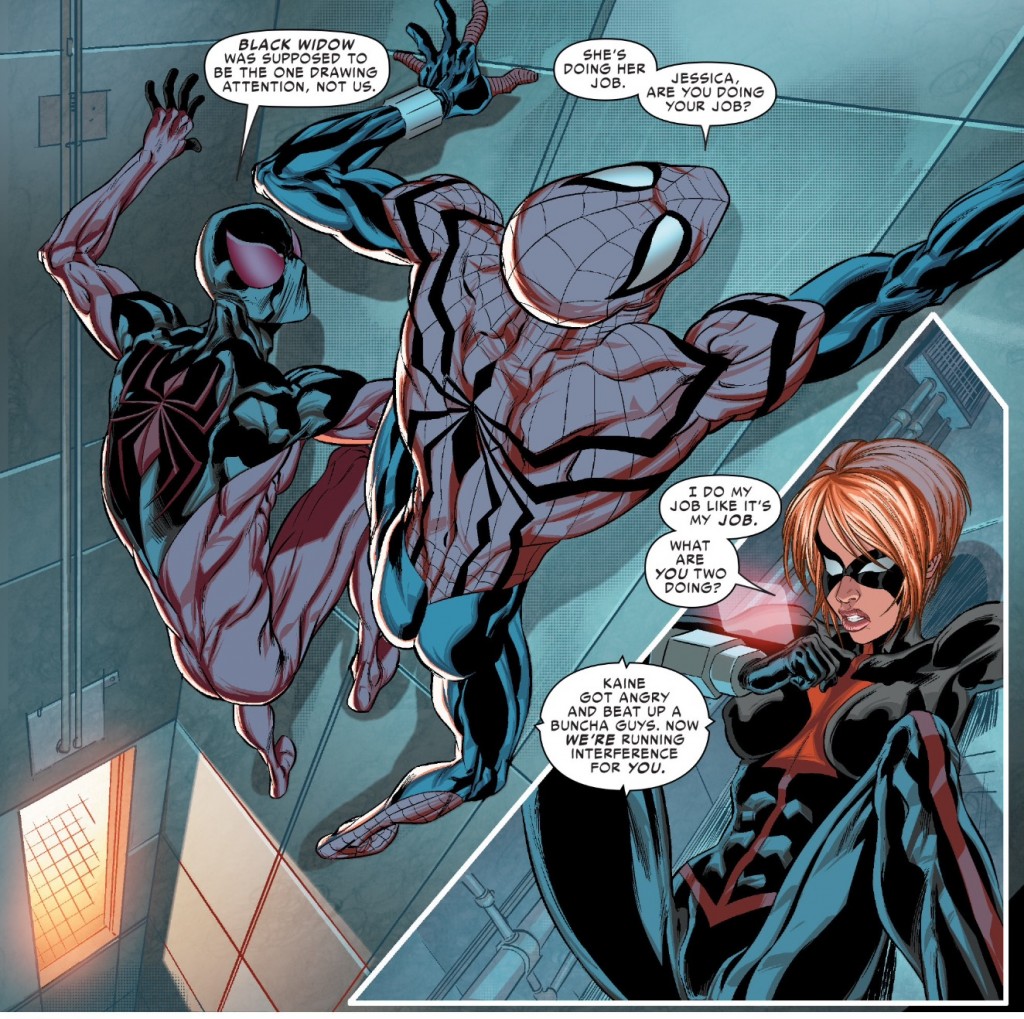 This approach by Marvel’s Spider office helps lessen the blow of all of “Spider-Verse’s” tie-in issues. One of the biggest complaints I heard as it relates to last week’s Amazing Spider-Man #11 – a comic I found to be quite good and probably my favorite issue of Amazing Spider-Man this year – was that there was too much emphasis on trying to convince readers to buy some of these miniseries in order to get the “whole” story of what’s going on in “Spider-Verse.” And while I don’t disagree that such tactics can cause a distraction for the reader, I do ultimately appreciate the fact that the Spider office is at least putting the work in to create relevant tie-ins to their big mega-event. This kind of cross-promotion isn’t exactly on the level of Stan Lee having Steve Ditko insert an image of Thor in Amazing Spider-Man Annual #1 as a means to promote Journey Into Mystery. All the same, if you’re somebody who’s just not interested in reading these tie-in books, based on his approach to “Spider Island,” I doubt Dan Slott is going to punish you for not dropping an extra $20 a month to keep up with everything. The trade-off for non-miniseries readers will just be a page here and there in ASM that recaps what they might have missed. Better yet, just read Scarlet Spiders, because it’s a lot of fun. 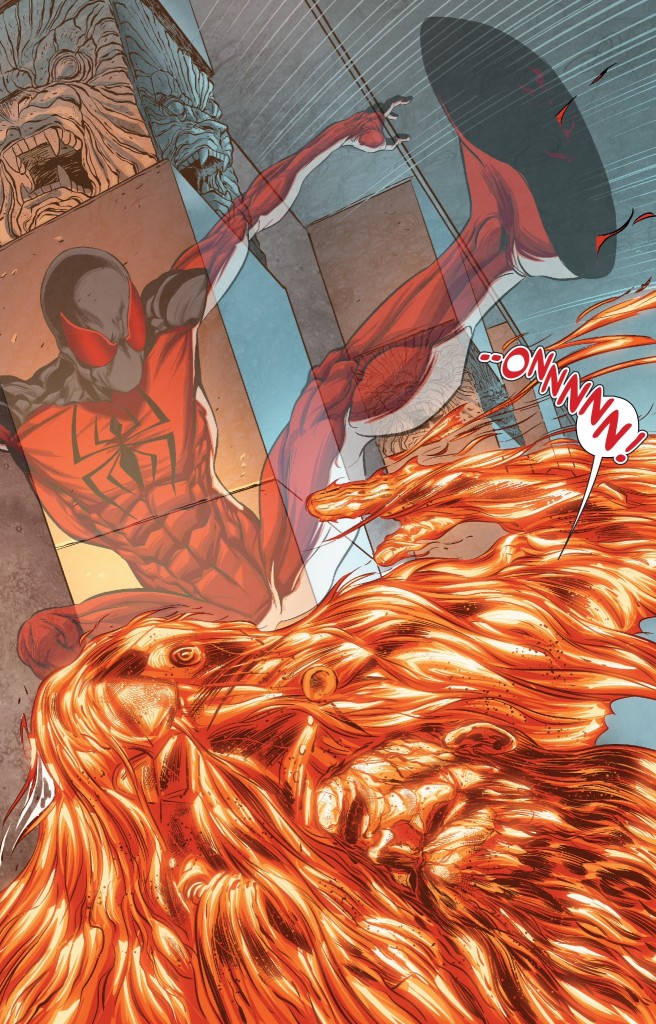 That is not to say that Scarlet Spiders #2 is a perfect 10. Last time out I critiqued how Costa’s script didn’t really add any personality and distinguishing traits to our three main characters outside of some very general personality traits. Kaine was unquestionably “dark,” Spider-Ben was brighter and more optimistic and Ultimate Jessica seemed to meet in the middle somewhere.

This time around, Costa definitely puts some work in on at least distinguishing Kaine and from Ben, but I’m not sure that he really hits on the appropriate character beats for either. In Scarlet Spiders #2, we get a series of red word blocks that I am to assume are supposed to be in Kaine’s voice. But when you compare the character’s monologue-ing to the kind of moody, dark character beat that Chris Yost delivered every month in Scarlet Spider over the span of 25 issues, there’s a bit of a tonal clash between Kaine’s two representations. I don’t honestly remember Kaine speaking so flowery and poetic, even if the upshot of what he was saying was that he was a bad man. 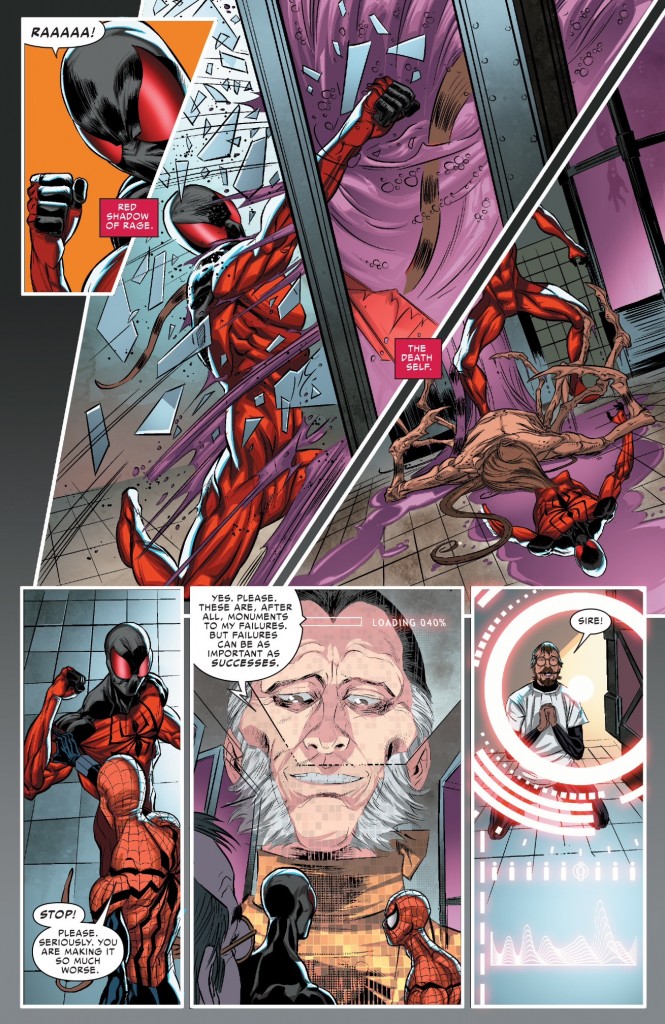 Additionally, I’m still struggling to get a sense of what Costa is trying to convey through Ben and Ultimate Jessica. I think of all of the characters to be featured prominently in “Spider-Verse,” this alternative Ben Reilly has been the biggest disappointment. I appreciate the character’s gloss and hopefulness, but I expected something with a bit more weight when it comes to a version of Spider-Man that embodies one of the most controversial and talked about eras in Spidey history. Jessica meanwhile still hasn’t’ exhibited much personality, and with just one issue to go, I doubt that’s about to change unless Costa has been plans for the character in the final installment. 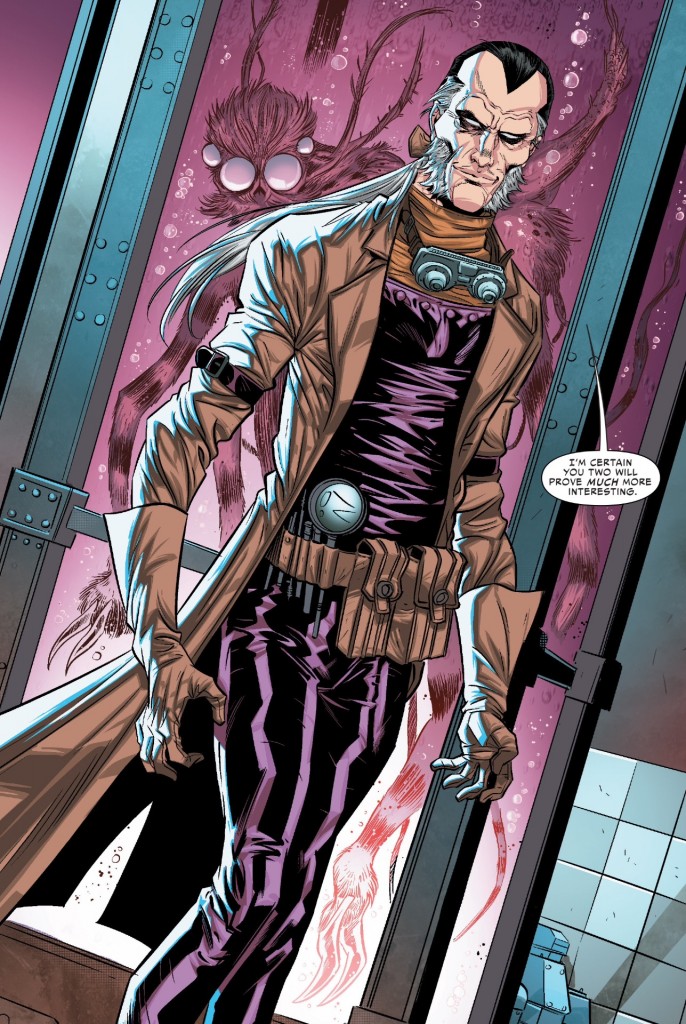 But what keeps Scarlet Spider #2 and this entire series moving along is how the plot is serviced. The comic delivers some answers to those of us who raised our eyebrows upon seeing alternative versions of three evil Spider-Man scientists in Miles Warren, Spencer Smythe and Marla Madison in ASM #11. Additionally, I’m impressed with how the Inheritor Jennix is being presented. In contrast to the same-ness of some of the alternative spiders, the entire Spider-team has done a wonderful job in creating distinct personalities for all of the Inheritors. They are all ultimately linked by their monstrosities and totem-lust, but Jennix definitely feels like his own living breathing character when compared to Morlun, Karn and Daemos. While the comic’s final panel definitely smacked of a video game-esque “boss battle,” Jennix has been crafted to be so delightfully evil, that he’s now unquestionably somebody I think needs to get his come-uppance through this story.