Home  »  Blind Spots   »   Across the Spider-Verse: What’s the Deal with Assassin Spider-Man? 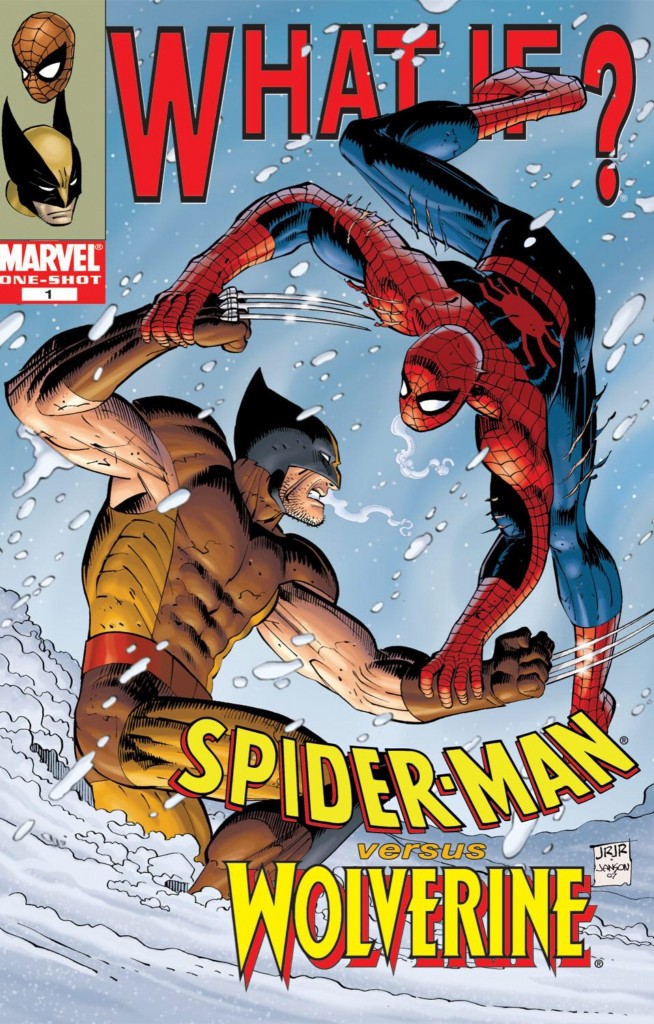 I figured I’d be one and done with discussing multiverse versions of Spider-Man that were featured in various What If? issues after I made my first “Across the Spider-Verse” post about What If? #1 a few weeks back. However, given the amount of face time “Assassin Spider-Man” (from the Spider-Man vs. Wolverine What If?) has received in the two Superior Spider-Man “Spider-Verse” prologue issues, I thought we’d check back in on this neck of the Marvel/Spidey Universe.

Plus, I’ve already heard from a few of you that you’re big fans of Assassin Spider-Man. While I’d a tad surprised to hear that given my own take on the character, I can also understand where these sentiments are coming from. In terms of “alternative” Spider-Men that are out there, Assassin Spider-Man might be one of the most philosophically unique Web Slingers out there. So if you’re bored by the idea of getting a bunch of “Peter Parker analogues” as Otto Octavius would say – guys who come from different timelines but all act exactly the same – Assassin Spidey is definitely a change of pace.

Here’s where I stand on the whole thing: while I realize that the spectrum of comic book fans is quite broad and diverse, over the years I’ve also found that people who are passionate about superheroes normally fall into one of two groups. There are those who adore “traditional” heroes who follow a very explicit code of conduct and ethics (which usually involves things like no killing), and those who relate to “shades of grey” characters who tend to operate with fewer moralistic restrictions. I will never say one kind of hero is better than the others, but in Spider-Man, I definitely feel like I’m a fan of the former, while I’ve had a habit of rejecting those with an anti-hero mindset a la Wolverine, Punisher, etc. 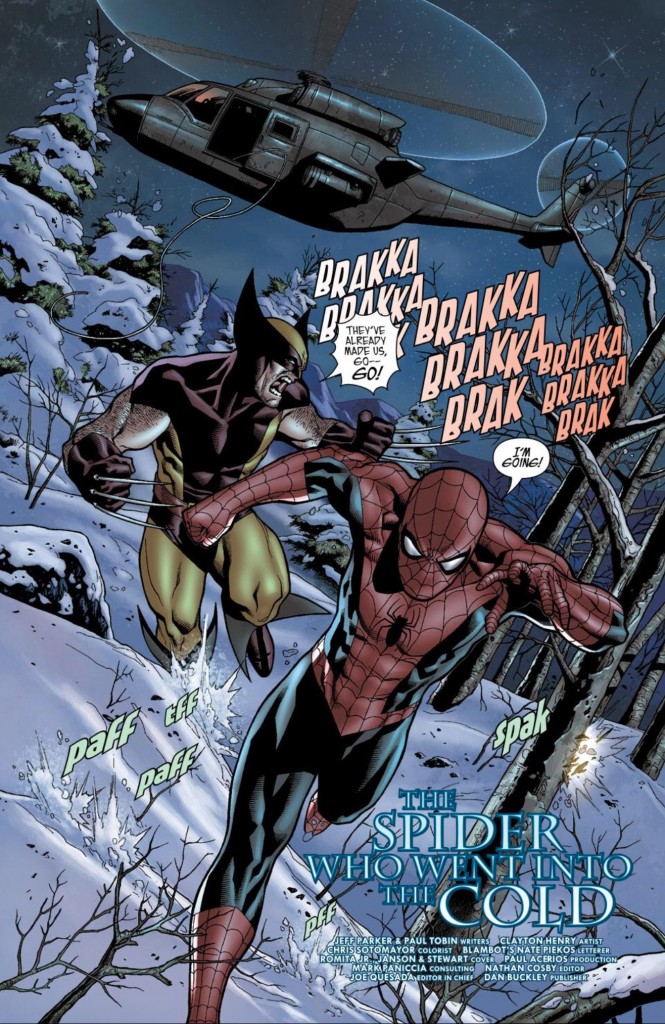 What Jeff Parker, Paul Tobin and Calyton Henry manage to do with their characterization/depiction of Spider-Man in the Spider-Man vs. Wolverine What If? story is merge these two contrasting elements together. And while it’s interesting to read about a Spider-Man who has a whole new take on “power and responsibility” like Assassin Spidey, I just don’t know if I buy this character transformation – especially when compared to the original source material.

For those who never read the original Spider-Man vs. Wolverine graphic novel – which is best known for the fact that it’s writer, Jim Owsley (now Christopher Priest), killed off Ned Leeds as a way to spite Tom DeFalco and his Hobgoblin story – the What If? creative turns its focus to another critical moment for Spidey; the moment he accidentally kills Wolverine’s female friend Charlemagne (or Charlie) when he strikes her in the face thinking it’s Wolverine picking a fight with him. In the original comic, Spidey is naturally haunted by his actions, and turns to Mary Jane for support (who is his pseudo girlfriend at this point in time). 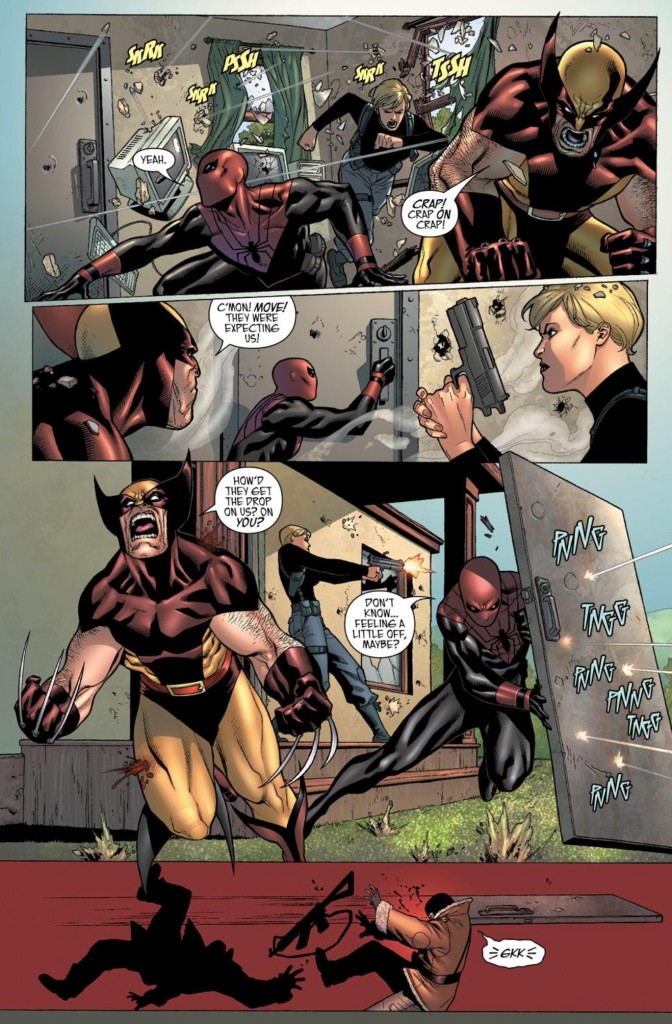 However, Parker, Tobin and Henry build their hypothetical tales off the moment Spider-Man goes to leave Europe with the ghosts of Ned and Charlie’s deaths fresh in his mind. Wolverine stops him from going back to New York and offers him an opportunity to make amends for his sins by rescuing Charlie’s sister Alex, who’s being held by another group of assassins.

Spidey is still initially squeamish when Wolverine continues to kill, but that starts to change once they rescues Alex. Spidey falls in love with her, and through that passion, decides to hone his abilities and become a super assassin working alongside Wolverine. His actions catches the eye of Nick Fury and S.H.I.E.L.D. who don’t fully understand what has happened in Spidey’s life that has caused him to slip a switch so suddenly in terms of his personality. In one shocking sequence, Spidey goes to web up another criminal and when the mock his weapons of choice, Spider-Man reveals a gun in his web shooters and he kills the guy.

The script attempts to explain away some of the behavior. Fury and Black Widow, who are questioning Nebo, a man who has trained Spider-Man, bring up the fact that Alex bears a striking resemblance to Peter Parker’s deceased love, Gwen Stacy. Then, there’s the “guilt” factor involving Charlie. But if these events weren’t enough to change Spidey’s demeanor in the mainstream timeline, what would feasibly trigger him to change like he does even in an alternative universe?

I get that’s the whole point of What If? comics – what would happen if the timeline went in a different direction? But there’s a big difference between showing how dramatically different events would be if Spider-Man joined the Fantastic Four or if Flash Thompson was bitten by the radioactive spider instead of Peter, and Spidey’s personality doing a complete 180 and the character becoming the exact opposite in everything he traditionally stands for.

To further muddy the waters, the story does capture some more “traditional” Peter moments. He apparently continues to send his Aunt May a monthly allowance from his assassin work and he donates anything extra to charity. In the same vein, if he cares enough to continue to try and provide for May, why would he sacrifice his proximity to her for a romantic partner in another country? 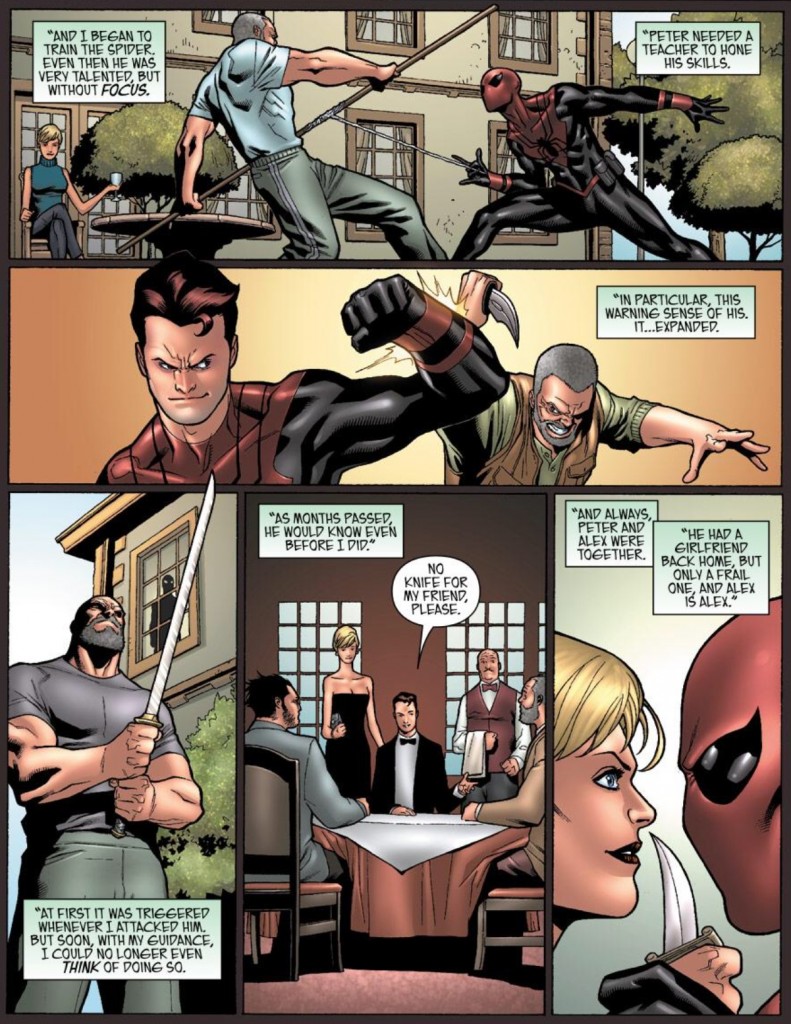 It doesn’t help that despite the fact that Peter has changed so profoundly for her, the comic doesn’t really give the reader much of anything to grab onto with its characterization of Alex. You could say that maybe he’s so attracted to her because she can take care of herself better than MJ or Gwen could, but keep in mind that Spidey still met Alex under the pretenses of her being a damsel in distress who needed saving.

With all that in mind, I think in the context of “Spider-Verse” and trying to create some necessary drama and conflict within “Team Spider-Man,” Assassin Spidey makes a very good addition to the storyline. But judged on his own individual merits, it just seems like another attempt by a creative team to do something different for the sake of doing so. Maybe Marvel knew what it was doing by first introducing this character six years ago (that he could later serve as an opposing viewpoint in an arc that uses “every Spider-Man ever”), but I might be giving the powers that be just a wee too much credit.

Tags:Across the Spider-Verse, What If, What If Spider-Man vs. Wolverine, Wolverine