Home  »  Blind Spots   »   Spider-Man Meets the Guardians of the Galaxy 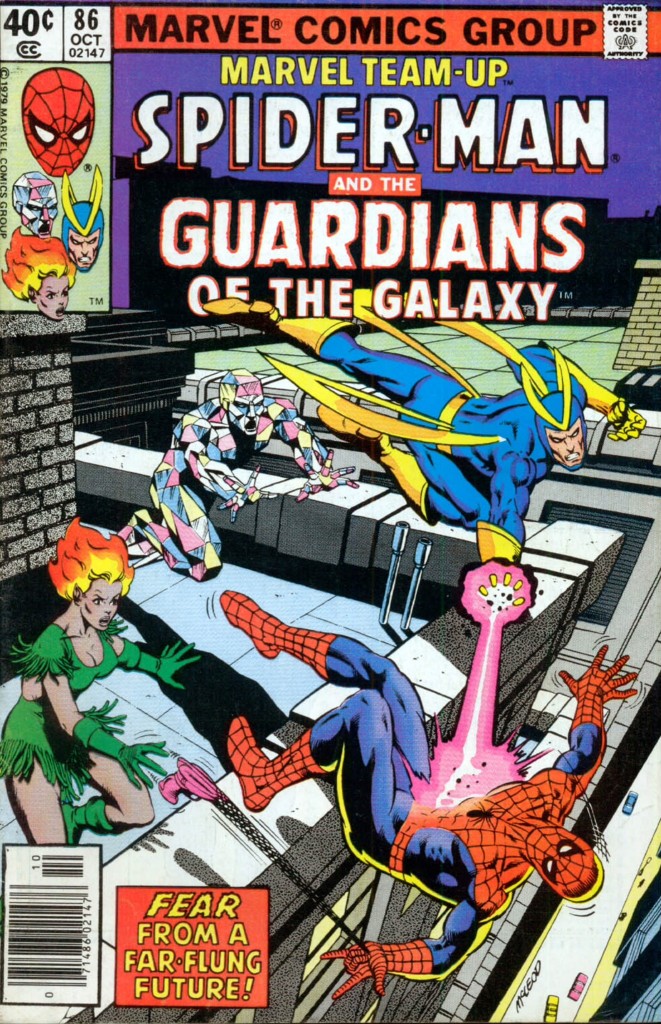 I’ve been dreading writing this post ever since Marvel announced its August 1 release date for Guardians of the Galaxy. Not because I have no interest in seeing a movie about the Guardians of the Galaxy. Quite the contrary. I haven’t been this stoked to see a Marvel movie since … well, okay, it was Captain America: Winter Soldier which wasn’t that long ago. But the point is I really, really want to see this movie and I’m a bit disappointed that based on scheduling conflicts, I probably won’t be able to do that until another two weeks (no spoilers please).

While the name on this blog refers to my lifelong chase for Amazing Spider-Man comics, I should note that over the past few  years, I have really become immersed in Marvel’s Cosmic-verse, devouring some of these classic tales by the lake of Jim Starlin, Steve Englehart and Steve Gerber by the truckload, with a special mention to the modern master of Marvel Cosmic, Dan Abnett and Andy Lanning.

But the reason I’m anxious about this post is that for the past three years, every time a major comic book movie is released, I’ve tried to schedule a Chasing Amazing post about a Spider-Man story that was somehow relevant to that new film. That’s been a piece of cake when it comes to films starring Captain America, Thor or Iron Man, but it’s damn near impossible to find something that connects to the Guardians of the Galaxy – at least THIS Guardians of the Galaxy. 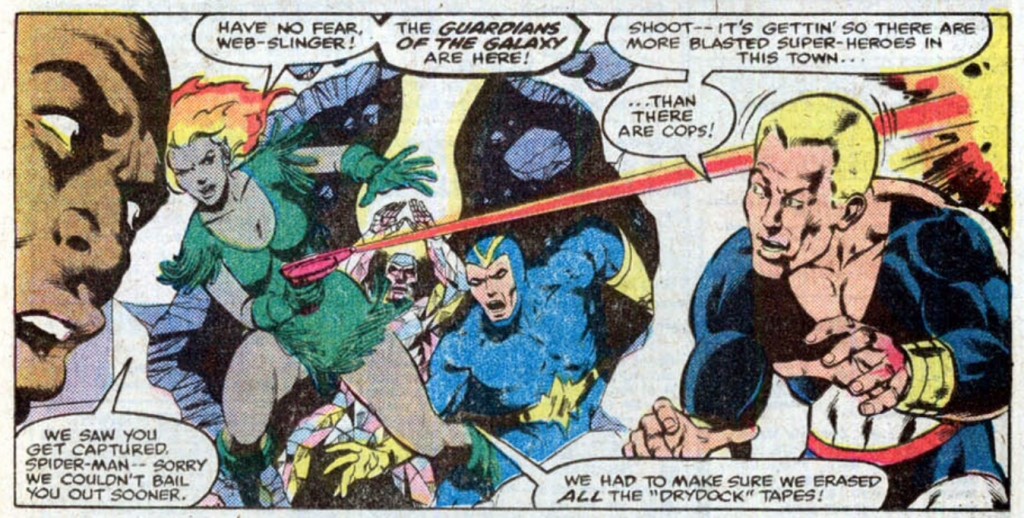 Yes, I’m fully aware that 1979’s Marvel Team-Up #76 co-stars Spider-Man and the “Guardians of the Galaxy,” but please keep in mind that nowhere in this comic should you expect to find Star-Lord, Drax, Gamora, Groot or Rocket Raccoon (why, oh why couldn’t Rocket’s creator, long-time Spidey scribe Bill Mantlo have given us ONE story where Spidey meets a gun-toting, talking raccoon?). This comic stars the ORIGINAL Guardians of the Galaxy – a team that formed in the 31st century (they travelled back in time for this story) and was created by Arnold Drake and Gene Colan.

The current – and assumingly after this weekend, infinitely more popular – lineup of Guardians was put together by Abnett and Lanning as part of Marvel’s rekindling of its Cosmic-verse in the late 2000s. And while I haven’t read enough of the old Guardians to make a definitive declaration, there’s a reason that DnA’s run has been adapted into the movie, while the bulk of the Drake/Colan Guardians will probably only show up in the Marvel Cinematic Universe as Easter Eggs.

Still, despite wasting more than 400 words talking about why I don’t to write this post, I’m going to soldier on and attempt to talk about Spider-Man vis a vis the Guardians of the Galaxy as depicted in this (Chris Claremont-scripted!!!) issue of Marvel Team-Up.

Wait. One more minute of your time to rant please … Marvel Team-Up #86 couldn’t even pair Spider-Man off with any of the original Guardians that might actually be a part of the Marvel Cinematic Universe down the road; i.e. Yondu, a founding member (who is confirmed to be in the new film), or Major Vance Astro, who plays a key role in the DnA Guardians series. Instead this comic sticks readers with Starhawk, Martinex and Nikki.

As for my thoughts on the actual comic being featured in the post, Claremont’s script follows the very standard MTU formula of introducing the non-Spidey guest star first, establishing some semblance of conflict between Spider-Man/guest star(s) in order to tease the idea that nobody can be trusted, and then bringing everyone together to fight a common enemy. 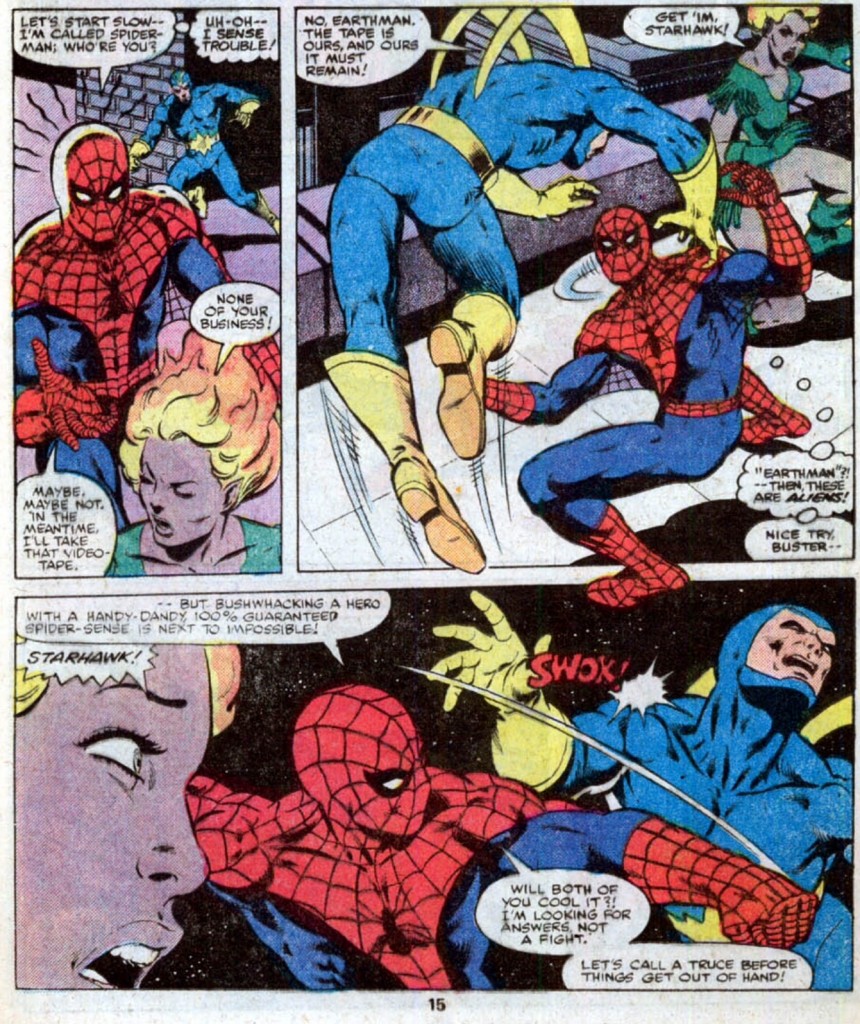 In that regard, the comic offers no long-term impact on Spider-Man or his supporting cast outside of the fact that it provided Claremont, who clearly had a fondness for the Marvel Cosmic-verse, an opportunity to work in a unique team-up for this book, just before he left MTU completely in order to focus on revolutionizing the comic book industry forever on Uncanny X-Men. The featured villains – a couple of hired goons named Hammer and Anvil – were never featured again in a Spider-Man comic (and were phased out completely by Marvel in 1986) while the cryptically-named Deterrence Research Corporation suffered a similar fate and has not been a part of the Spider-verse since.

The one little bit of gold (or is it silver or bronze) that can be mined from this comic, is a little bit of meta-commentary Spider-Man makes after first encountering Martinex and Nikki. Spider-Man channels his inner Murtagh, but instead of being too old for this sh** instead determines that he’s too much of a “friendly neighborhood Spider-Man” to be dealing with all this cosmic craziness.

This sequence, of course, speaks to the larger issue I’ve had in developing this post in the first place. Marvel (surprisingly so) has just done an amazing job of keeping Spider-Man confined to the street level of crime-fighting. Sure, there’s been some dalliances here and there – most notably the very excellent multi-part “Cosmic Spider-Man” arc from the late 1980s (which I wrote about as part of “Reader’s Request Month” last year). Then there’s one of my favorite non-Amazing Spider-Man, Spidey stories of all-time which was written/illustrated by Jim Starlin and saw Spider-Man and the Thing travel into space together to rescues the Avengers from the clutches of Thanos. But other than that, there’s just a story here and a story there where Spidey goes into space with the Fantastic Four or the Avengers, but not necessarily something that feels like an integral part of Marvel’s broader Cosmic-verse. 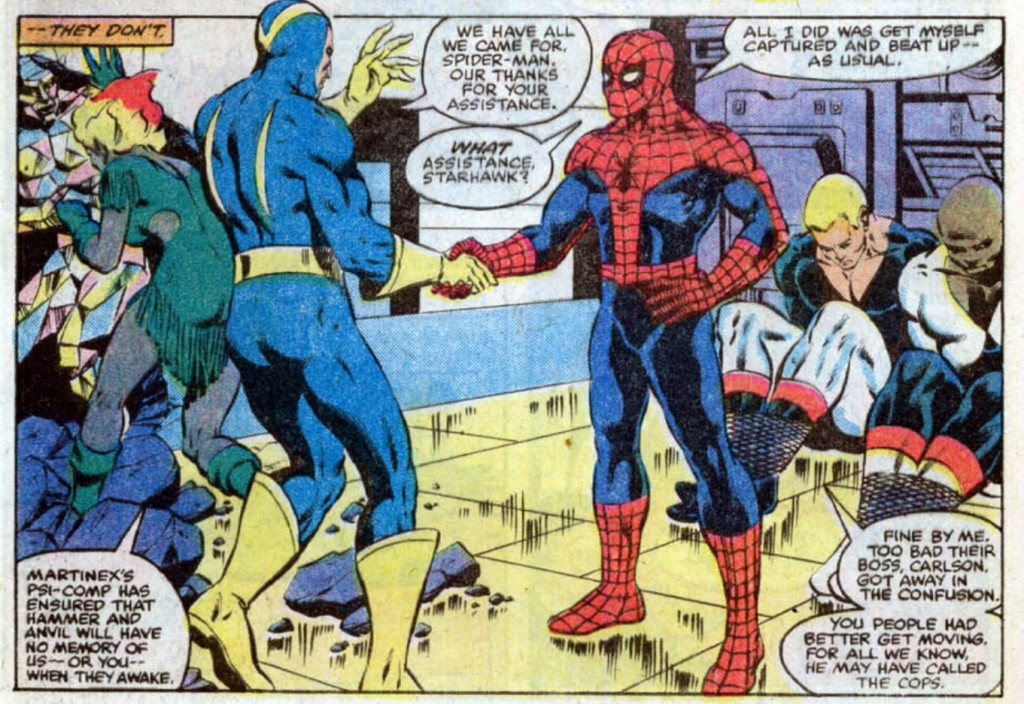 So that leaves me with MTU #86, a completely forgettable comic that doesn’t even star the A-list characters of a C-list Marvel team (okay, that’s maybe a tad disrespectful to Starhawk). And this is the comic I use to try and get myself and others amped up about a movie that, from all early reports, I’m expecting to be one of the best Marvel movies of all-time.

Happy Guardians of the Galaxy weekend everybody!