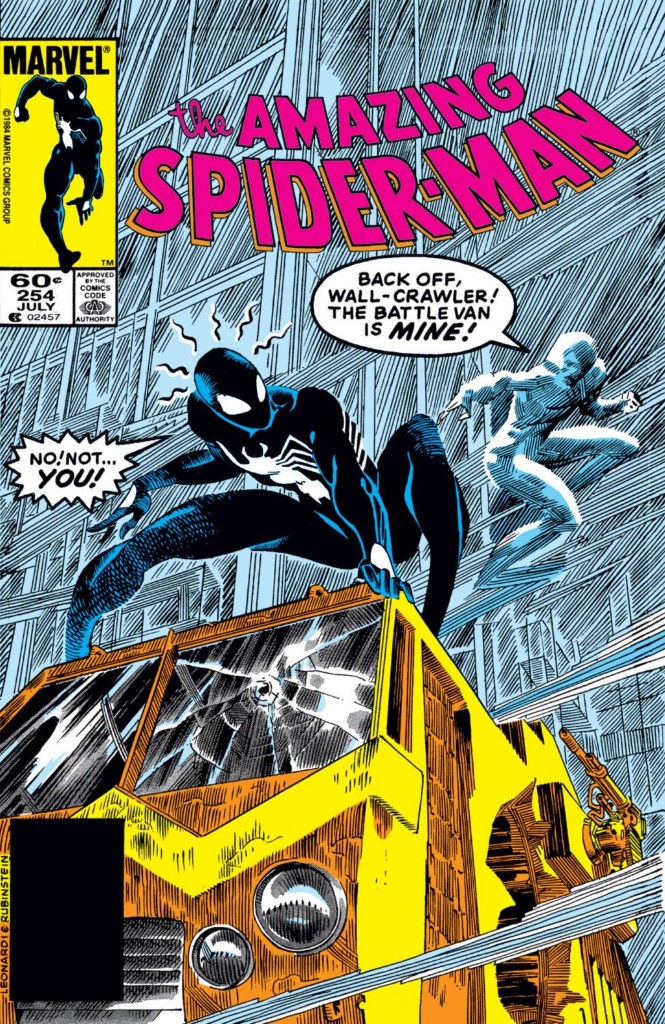 For the third part of the “Original Alien Costume Saga,” writer Tom DeFalco (with pencils from Rick Leonardi who was filling in for Ron Frenz), continues to use his first batch of issues on the main Spidey book as a mini-origin story of sorts. So much so that the title of Amazing Spider-Man #254 is “Power and Responsibility” – a rather overt reference to the famous closing line of Amazing Fantasy #15, “with great power comes great responsibility.”

In terms of how “power” and “responsibility” are addressed, DeFalco builds off the major plot development from ASM #253 – Peter has finally disclosed to his Aunt May that he quit graduate school in order to pursue full-time employment at the Daily Bugle (and be Spider-Man) – by giving readers an incredibly conflicted Spider-Man in this story. 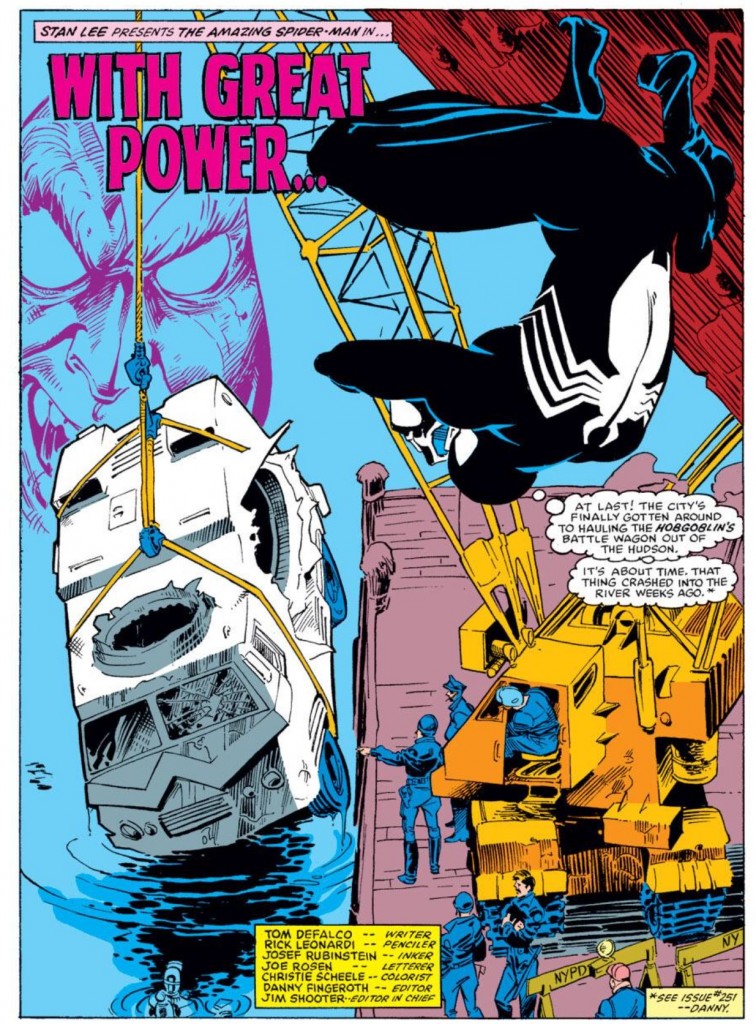 Here, thanks to a lifeline thrown to him by his aunt’s boyfriend, Nathan Lubensky, Peter has an opportunity to patch things up with May if he can just get to a restaurant in time to meet her for lunch. But as Peter starts to make his way across town, news breaks that the Hobgoblin’s armored wagon/party bus, which was last seen floating in the river at the end of ASM #251, has been stolen on the way to the impound. Spider-Man believes if he can figure out who stole the wagon, he might be able to discern if the Hobgoblin is still alive and who he is.

So, instead of being a responsible nephew by meeting the woman who raised him and patching things over, Peter prioritizes his responsibilities as Spider-Man.

I’m of course oversimplifying Peter’s decision. As Spidey himself says in the comic, Hobgoblin is a known sociopath and murder. If he’s still at-large and Peter passes on an opportunity to apprehend him as Spider-Man, then is he turning his back on his superhero responsibilities? Keep in mind that even in failing May as a nephew, he’s fulfilling a larger obligation to protect her and other innocent New Yorkers by going after the Hobgoblin.

The conundrum – does Spider-Man’s responsibilities trump familiar responsibilities – is one that has been addressed by Spidey creators countless times over, most recently by Dan Slott in ASM #655 three years ago (an issue I happened to like quite a bit at the time it was published). And I don’t think any creator who has tackled it has ever come to a definitive answer (if there is even a definitive answer). ASM #254 leaves us with a very striking image, courtesy of Leonardi, that shows the specter of Spider-Man “haunting” Peter and his personal life, but it’s not like anyone has ever created a story where Peter quits being Spider-Man to spend more time with his family and loved ones and anyone actually feels good about that decision.

One has to remember that the first half of Amazing Fantasy’s #15’s final quote is “with great power,” and those are the words that seem to distinguish Peter from any other person. Because of a freak accident, Peter now has extraordinary power – powers that give him the ability to extinguish extraordinary threats to humanity. He also has the power to be a kind, wonderful and loving nephew. But is that power and truly “great” power?

At the risk of revisiting last summer’s project here on Chasing Amazing, it’s also worth nothing that in ASM #254, DeFalco finally starts to weave his very own “who is the Hobgoblin” mystery. With Roger Stern leaving the book before he got to resolve his original story (which would have been Roderick Kingsley as the Hobgoblin – an idea that DeFalco was not a big fan of), DeFalco takes the focus away from some of the palatial estates and socialites that Stern was writing about in his final ASM issues, and instead plants seed that the character is somehow connected to the criminal underworld. Of course, that idea only makes sense if the character is ultimately revealed to be Kingpin’s son, Richard Fisk, as DeFalco originally intended, rather than Daily Bugle reporter Ned Leeds (as we first got in ASM #289).

Either way, it would seemingly appear that DeFalco was assigning meaning to Jack O’Lantern’s salutation to Spider-Man after they battle over the stolen wagon – “I’ll give your regards to the Hobgoblin.” Spider-Man recalls that Jack O’Lantern is actually a former mercenary with a criminal background, so if the Hobgoblin is interacting with someone so nefarious, then it’s easy to surmise that the character is connected to the gang-world. 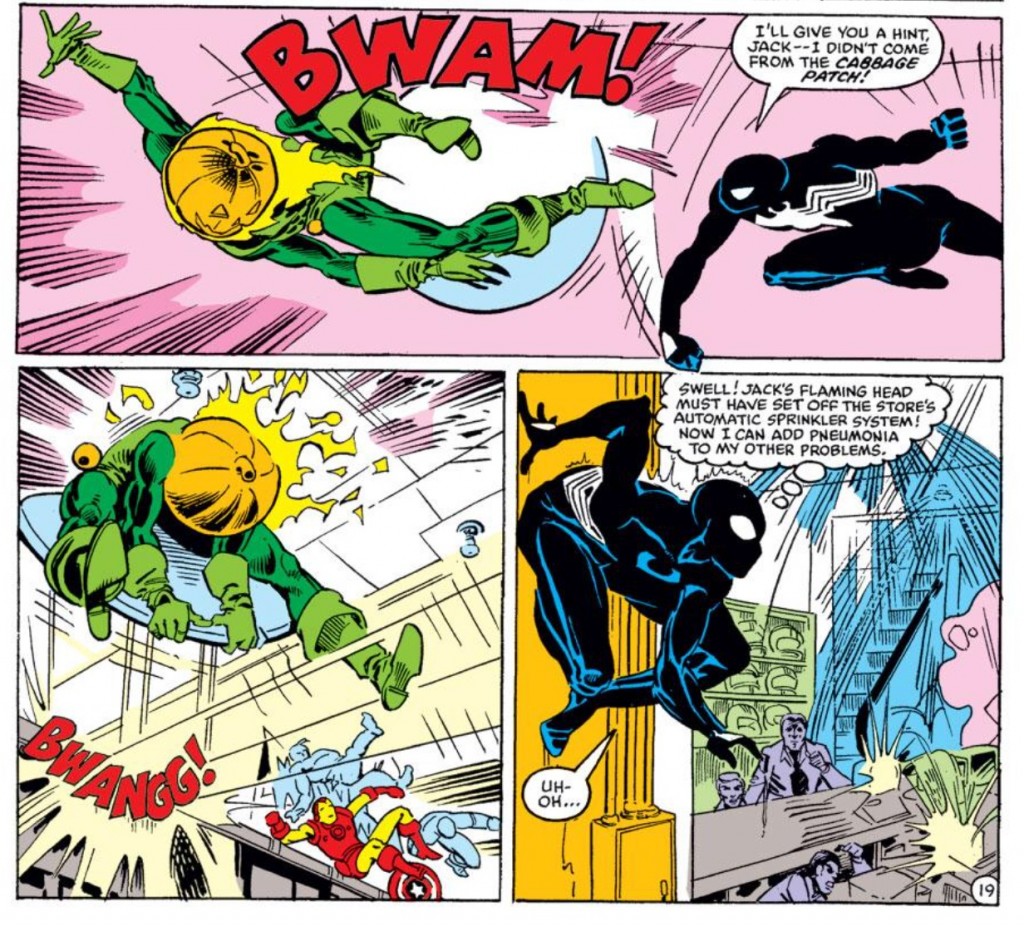 Before I go much further down this rabbit hole, I do think it’s worth mentioning that Spidey’s black costume does get a few obligatory mentions in this issue, but it falls far short of the grandeur and fanfare of the previous two installments of the arc. That would appear to be in lockstep with what DeFalco told the (then) Superior Spider-Talk podcast last year that because fans were so outraged by Spidey’s new threads after ASM #252, he was forced to think of a way to ditch the costume as soon as possible (though he was forced to wait until Secret Wars #8 – the issue that formally introduced the costume in terms of sequential continuity – to be published before returning Spider-Man to the red and blues).

There’s also a funny line in the script where Spider-Man gets the jump on some of the goons hijacking the Hobgoblin’s bus and when they act like they don’t know who’s there, Spider-Man is all like, “come on, I don’t look THAT different and I still have my Spider signal”  (I’m paraphrasing here). 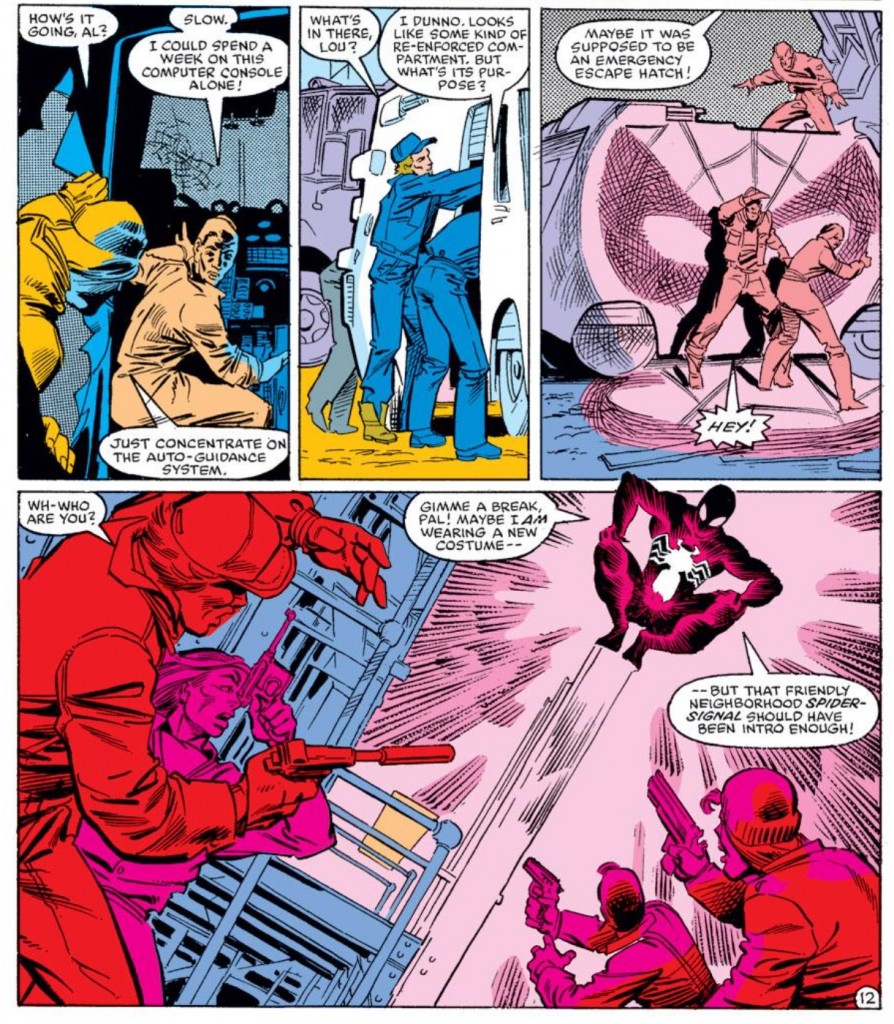 This is one of those instances where having had a conversation with the creator really changes my perspective on a storyline.  I don’t think if I knew just how much Marvel was trying to divert fan outrage away from the black costume that I would even have noticed some of these scenes. Or maybe I’m just over-reading the comic, which wouldn’t be the first time (nor the last).

This is part three of Chasing Amazing’s lookback on the “Alien Costume Saga.”