My Friday session at New York Comic Con mainly consisted of me fighting through the ever-growing crowds (I’m really shuddering to think what the Saturday session is going to look like) to talk with more creators for Superior Spider-Talk. Fortunately, using interviews obtained as my metric, it ended up being a successful day, and I even had an opportunity to take in a few panels (though not the Avengers panel I was hoping for) and do a a little unplanned shopping.

First with the interviews. First thing in the morning I met with Tom Lyle, who’s probably best known in Spider-circles for his lengthy run as penciller on the (adjective-less) Spider-Man series in the early/mid-90s, and for being the artist who created the Ben Reilly/Scarlet Spider hoodie costume. Lyle, who now teaches at the Savannah College of Art and Design, talked with me about Spider Clones (including the recent Scarlet Spider resurgence) and 90s Marvel overall.

I also earmarked Friday to be the day I talked to some current Spider-Man creators, most notably Superior Spidey artists Ryan Stegman and Humberto Ramos. I touched base with Stegman a few days before NYCC and he mentioned grabbing him during the morning session Friday or Saturday would probably be best but when I arrived at his table around 11 a.m., the long line of fans waiting to get some of Stegman’s signature “five minute sketches” changed the plan a bit.

I should thank Ryan right now for not wanting to toss me out of the Javits Center after I kept swinging by his table every half hour or so to check on the length of his line. I probably came across a little more insistent than I wanted, but in the latter half of the evening, I was able to capitalize on the fact that Stegman had stopped sketching for the day, so I jumped next to him to conduct a q+a while he signed autographs.

Like Stegman, Ramos had a steady line at his table the entire day but he was kind enough to give me some advice on Thursday: if I wanted to nab him, come during the last five minutes of the night, and his booth should be quiet enough to make it work. And indeed Ramos was right.

My conversation with Ramos revealed just how passionate a Spider-Man creator he is. He has a ton of respect for the character and seems to derive great joy from working on Spider-Man. My biggest anxiety about the interview is because Ramos is such a soft-spoken individual, sections of the recording may have fallen victim to the awful acoustics of the Javits center. Hopefully my podcast partner Dan Gvozden can work his editing magic because this was a really nice interview. Otherwise, hopefully our listeners will be a little patient and understanding of just how terrible things sound inside the Javits (and I haven’t even talked about cell phone reception yet … whatever exists of it). 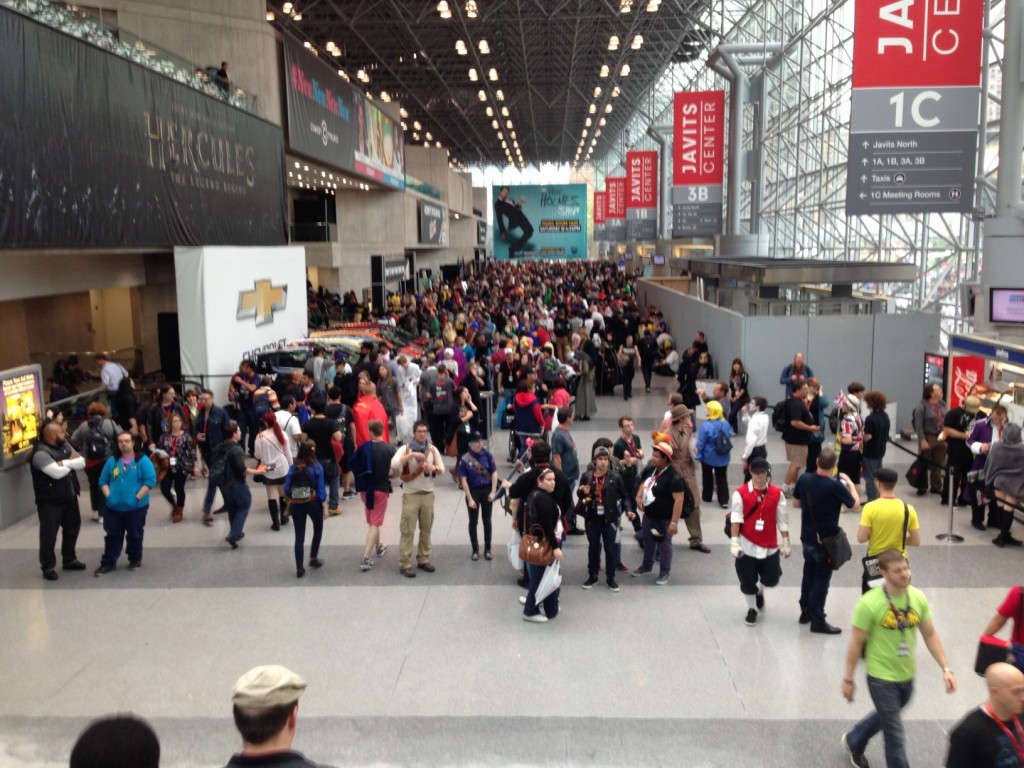 The crowds at NYCC are just killing me.

Speaking of poor audio, I got my do-over with Michael Dialynas, who is illustrating the final issue (the Superior Spider-Man special) of the “Arms of the Octopus” arc. I’ll reiterate that Michael is a great guy and we actually had a fascinating discussion after the mic was off about Spider-Man’s costumes.

FYI … a common theme from all of these creators when asked questions about the “death” of Peter Parker in Amazing Spider-Man #700 is to pay close attention to Sunday’s Superior Spider-Man panel. Cue ominous/foreshadowing music.

On the panel side, I attended one session hosted by a former Spider-Man creator and another that had nothing to do with anything Spider-Man related, but was fun all the same. J. Michael Straczynski, who’s written a little bit of everything, but who’s also well known for his extended run on Amazing Spider-Man in the early-mid 2000s, conducted a “writer’s workshop” on Friday. He basically spoke on his overall philosophy on writing (write often, don’t compromise on your ideals if it’s possible) and then took questions from the crowd. The old reporter in me couldn’t help but raise my hand and ultimately get a bit of a rise out of JMS. I asked him about how the Internet age has spurred many writers to write for “exposure” rather than pay (including the writer of this blog). Not that I expected him to be, but JMS was not sympathetic about what I see as a real crisis affecting the industry right now. JMS’s claims that a writer “always has a choice” when it comes to not writing unless they get compensated is unrealistic. As someone who also worked in print for years, publications have not yet found a way to efficiently monetize their online operations and readers have been pre-conditioned to expect everything on the Internet to be free, which makes  paying writers more precarious. But if you’re trying to break into the industry, or in my case, get recognition within a specific niche of writing (comic books), your options per JMS may be to hold out for pay or deal with a lifetime of never seeing your hard work get published. When I mentioned I write a comic book blog, JMS joked that I was also “the enemy” to folks like him and likened blogging to masturbation. That made me laugh, but can’t say it was worthwhile advice indicative of a “workshop.”

I ended my evening with a “Comic and Beer” panel, which I mainly attended because I like both. The panel of speakers consisted of some creators like CB Sebulski for Marvel, and Matthew Waite, who’s best known for his 8-bit variant cover illustrations, along with Brian Dochney from Brooklyn Brewery. Can’t say I “learned” all that much from the panel, as it was really just a celebration of beer and comic books (and all of the analogies we can make to connect the two), but it was filled with a lot of cheering, so a good time was had by all!