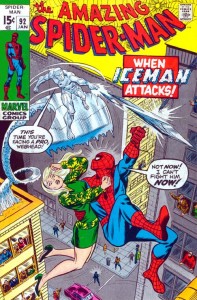 Now that I’m officially done talking about the Hobgoblin on Chasing Amazing for some time, I thought I would use the remainder of September to acknowledge the 50th anniversary of the debut of two of Marvel’s greatest properties – the Avengers and the X-Men. While I’ve always been a Spider-Man guy first and foremost, it’s impossible to navigate the world of Marvel comics without being exposed to the Avengers and the X-Men, especially in today’s marketplace when it seems like half the titles at my local comic book shop are built around these two teams. With Spider-Man/Peter Parker debuting 13 months before both, he has had plenty of interaction with the Avengers and X-Men (including becoming an Avenger in the early/mid-2000s) over the past 50 years, so I plan to spotlight some of my favorite (or most interesting to write about) team-ups and crossovers from my collection and/or that I’ve read about via collected editions and the Marvel Unlimited app. I’ll also be re-posting past posts I’ve done involving Spidey and the Avengers/X-Men for those of you who are newer readers and don’t remember me discussing some of these key events the first time around.

As a starting point for this “theme month” of posts, I figured I’d take a look at a comic guest-starring the X-Man/Avenger I most closely associated with Spider-Man when I was younger, Bobby Drake, aka, Iceman. As a child of the 80s, Saturday morning cartoons were as much as a staple of my diet as a bowl of Rice Krispies, and while I couldn’t spontaneously recollect a single plotline from the show if you asked me to right now, I distinctively remember getting some of my first exposure to Spider-Man through “Spider-Man and His Amazing Friends.”

For the unfamiliar, “Spider-Man and His Amazing Friends” showed the Web Slinger teaming up for weekly adventures with Iceman and a new character, Firestar. Years later, I always found it odd that the show didn’t use Iceman and Johnny Storm/Human torch (a team-up concept that would go on to be used expertly by Brian Michael Bendis in Ultimate Spider-Man), as Spider-Man and Human Torch were best frenemies forever, but regardless, any time I saw Iceman gracing the cover of an issue of X-Factor or any of the other X-Men books back in the late 80s/early 90s, I always knew him as the cartoon friend of my favorite superhero.

When I finally picked up a copy of Amazing Spider-Man #92 a couple of years ago (if memory serves, I probably grabbed it as part of one of my regular online buying binges at mycomicshop) I was first struck by the cover image of Spider-Man and Iceman being at odds with each other – over the safety of Peter’s girlfriend Gwen Stacy, no less! But in 1971, that was more or less the norm for Spider-Man and his relationships with other Marvel heroes. It wasn’t until Marvel Team-Up launched the next year that we saw Spider-Man regularly team with other “good guys,” and even then there was often tension with these tandems. Still, I was intrigued to see if Iceman would start his transition from adversary to “amazing friend” within the pages of ASM #92. 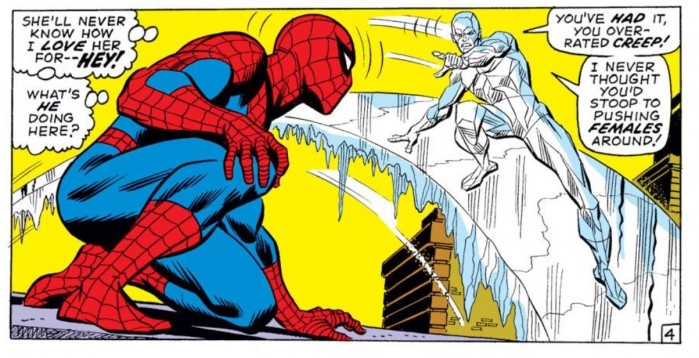 What’s actually quite good about this comic book is how Stan Lee and Gil Kane ignite the conflict between Spider-Man and Iceman in a way that’s sensible but also speaks to larger social issues from the late 60s/early 70s. The troublemaker in this issue is the sleazy, non-super-powered Sam Bullit, who is exploiting the tragic death of Gwen’s father, Captain Stacy, to mount an anti-crime platform for his campaign to be New York City District Attorney. A major part of Bullit’s campaign is his anti-Spider-Man stance, which naturally curries favor from Daily Bugle editor J. Jonah Jameson and also earns him an endorsement from Gwen who’s still grieving from the death of her father. But the reader learns through Jameson’s right-hand man, Joe Robbie Robertson, that Bullit is a fascist racist with criminal connections. This makes Bullit’s ability to manipulate good-natured people like Gwen, and later Bobby, all the more enraging. 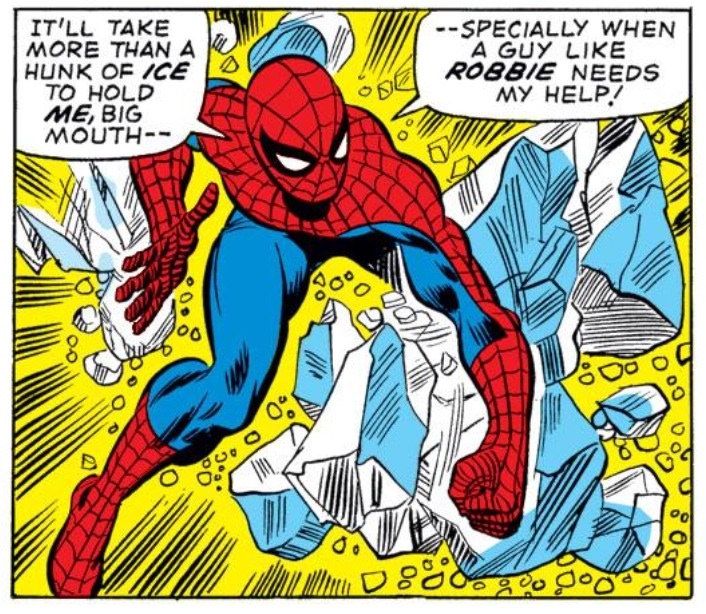 I’m honestly fascinated by Bullit’s pull over Iceman just because of how the X-Men were portrayed from the very beginning by Marvel. While there are numerous opinions on this debate, my understanding of the Uncanny X-Men was that it intentionally or unintentionally came to symbolize the racial struggles/divides in the United States during the height of the Civil Rights era in the 1960s. Charles Xavier’s mutants were always regarded as outcasts and criminals by the non-mutant population, regardless of how often they exhibited heroism in saving the world from the villainy of Magneto and others.  For Iceman just to accept Bullit’s word that Spider-Man was a bad guy at face value seems so unfortunate. But I also don’t have to stretch my suspension of disbelief to buy into it because these circumstances reflect a certain truth about our society (especially in the early 1970s). We live in a world where it’s very easy to manipulate public opinion for or against one cause or another – even when on the surface the public’s opinion appears counterintuitive to its best interests.

Of course, because this is a comic book in 1971, Lee and Kane have to come up with a way to resolve this conflict in a way where good triumphs over evil, especially a version of evil that is so hateful and disgusting as Bullit. The first domino to fall is when Robbie successfully convinces Jonah to drop his endorsement for Bullit and then the politician demonstrates just how gross he is when he refers to Robertson as “sambo” – a moment that still makes my toes curl every time I read it.

When Bullit’s goons then kidnap Robbie and threaten to kill him, Spider-Man attempts to save the day before Iceman shows up again thinking he’s doing the world some good by taking out this “masked vigilante.” Fortunately, Spidey is able to lead Iceman to the warehouse where Robbie is being held so he can see for himself what a hypocrite and crook Bullit is. And thus the alliance between Spider-Man and Iceman begins. 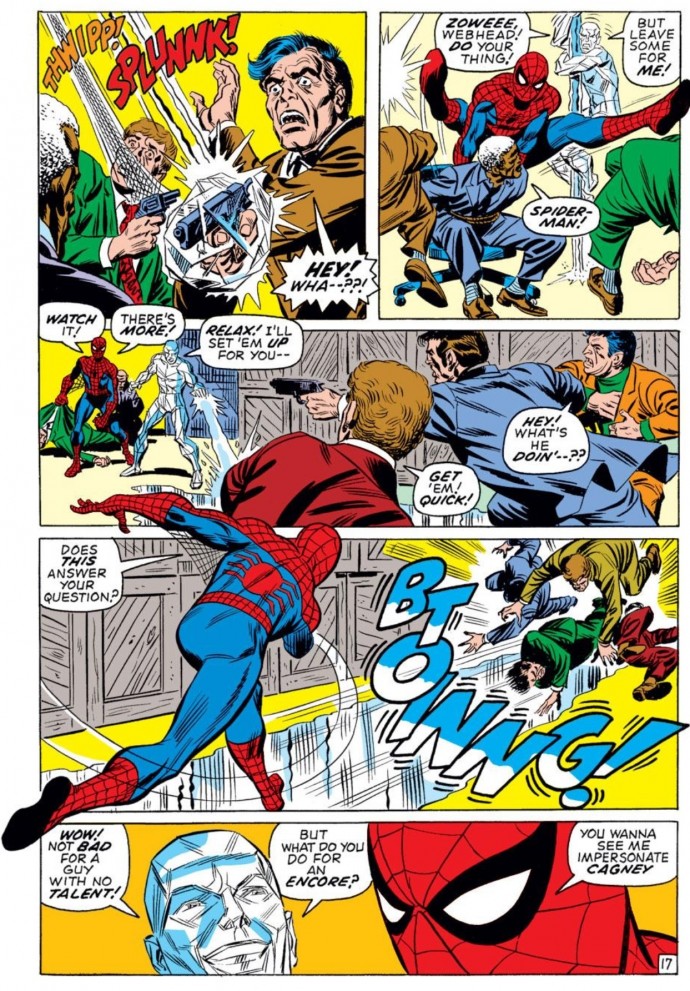 ASM #92 is far from a consequential entry in the series, but for fans of the “Spider-Man and His Amazing Friends” series, this is certainly as good of an entry point into the Spider-Man/Iceman dynamic as any. For those personal/nostalgic reasons, it also makes for the perfect starting point for any X-Men/Avengers posts I choose to do throughout the rest of September.