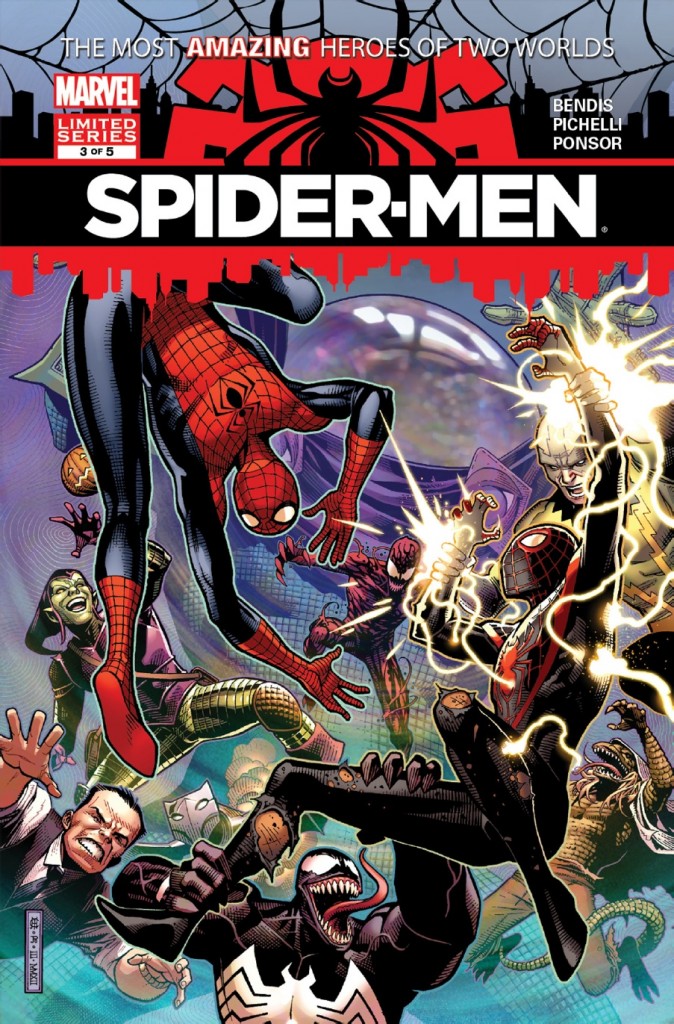 Similar to last summer when Spider Island and all of its accompanying spin-offs inevitably told the better story with far less fanfare than Marvel’s “mega” event crossover Fear Itself, this year, the Spidey-focused mini-series Spider-Men seems to be far more satisfying than Marvel’s throw everyone into a pot and make a story AvX mini. At least from the perspective of this long-time “616” (aka, “Amazing”) Spider-Man fan who doesn’t have a whole lot of love lost for the Ultimate series.

It’s not that I’m in love with what Brian Michael Bendis is doing with Spider-Man, but with the “Ultimate” version of Peter Parker now deceased and replaced by Miles Morales – known by some Republicans as the token minority kid imposed on America by the Obama’s – if Marvel is going to pull the trigger on some kind of inter-dimensional crossover, now is as good of a time as any. I’m sure the 50th anniversary of Spidey’s first appearance in Amazing Fantasy #15 also has a LOT to do with the timing of this issue.

For the series to work, at least from my humble perspective, I really wanted to see Bendis explore two big things: 1) How does the 616 Peter Parker respond to a universe that believes him to be dead (and where characters from the 616 universe who are long gone, are still alive, like Gwen Stacy) and 2) Now that Peter and Miles have met, how is Marvel/Bendis going to explain away the sheer existence of an “Ultimate” universe in terms that a 616 character can understand?

I think issue #1 is going to be easier to address than #2 and perhaps the somewhat positive impression I have for this series right now is being driven by the fact that I just finished the third installment, which leaves readers with a helluva of cliffhanger – notably Peter going to visit the Ultimate versions of his Aunt May and Gwen Stacy. I have to imagine that the level of shock and disbelief from both sides of this encounter will be off the charts and if the events of Spider-Men carry over to ASM in the coming months, could have an enormous impact on Peter Parker’s development.

As for the second question, I’m sure this is going to be far more difficult and convoluted for Marvel and Bendis to address, so I have my doubts that they’ll even go there when this series concludes. Which makes paying close attention to question #1 all the more important. I would argue that Peter getting a glimpse into this alternative universe where he’s dead, another person is Spider-Man and his first true love is still alive is the most significant thing to happen to this character since the ill-advised Mephisto deal in “One More Day.” If Spider-Men concludes next month, happily I presume, and Peter returns to ASM-land with the status quo firmly in-check, I’ll view this whole endeavor as a tremendous wasted opportunity for Marvel to do something drastic, yet intellectually stimulating with the Spider-Man character. I certainly see more long-term potential with a keenly-aware Peter Parker fresh off his return from “Ultimate” land, than with a swinging single Peter from the Brand New Day-era.