As was demonstrated in Spider-Man’s confrontation with Morlun, and his much ballyhooed battle with the Juggernaut, when the odds are the most stacked against the Web Slinger, he always has his intellect to help him deal with a situation that brute strength alone can’t handle. I always loved those moments because it’s Spidey’s brain that separates him from most other superheroes. 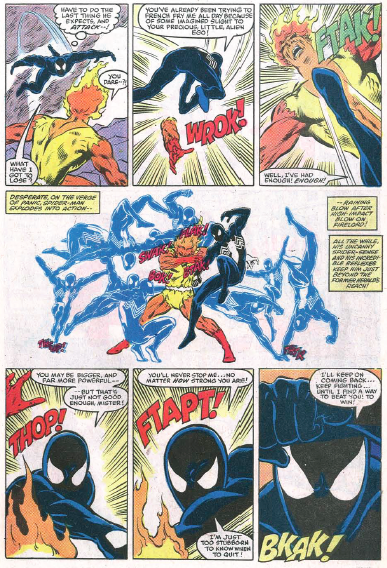 And then there’s Spider-Man’s epic, yet often-forgotten encounter with Firelord, the former herald to notorious planet-eater Galactus. During this two-issue arc, Spidey throws every trick and mind game that he can come up with to diffuse the overbearing Firelord, before discovering that taking the fight straight to him was the best way to defeat him.

I sometimes think this storyline gets overlooked in the ASM universe since Firelord is a villain better associated with The Avengers. But as we witnessed in the Roger Stern’s “Nothing Can Stop the Juggernaut” there’s nothing wrong about bringing in a bad-guy from another comic book series for Spider-Man to figure out and it’s even better when it’s established –as done here with Firelord – than the more “accomplished” supergroups like the Avengers and Fantastic Four are out of town and Spidey is left to figure things out on his own.

Similar to his encounter with the Juggernaut, Spider-Man starts things off with Firelord with a little hand-to-hand combat before discovering rather quickly than he’s overmatched. So then he steals Firelord’s staff and lures him into the water to diffuse him temporarily so he can come up with a better plan of attack. 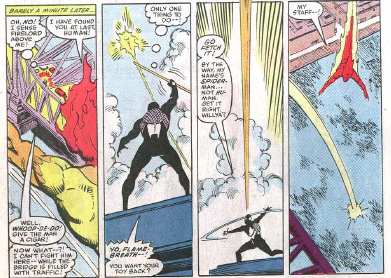 Unlike the Juggernaut encounter – who seemed to treat Spidey’s confrontations as more of an annoyance – Firelord is ticked off and is ready to take down innocent people around New York City in order to draw Spider-Man back into the fight. While Spidey obliges, he never goes back to straight-up fisticuffs and instead tries to trick Firelord into being blown up in an abandoned building, being struck by an oncoming subway train and colliding  into gasoline tank. Spider-Man continues to get upset with himself since he’s continually raising the stakes of danger to outsiders with each attempt to defeat this villain. When the gasoline explosion nearly takes out an entire city block, Spidey is distraught with the destruction he caused, and is concerned that instead of just defeating Firelord, he kills him. I always appreciate it when the creative time maintains Spider-Man’s sense of honor and moral code, even when the odds are so physically against him. 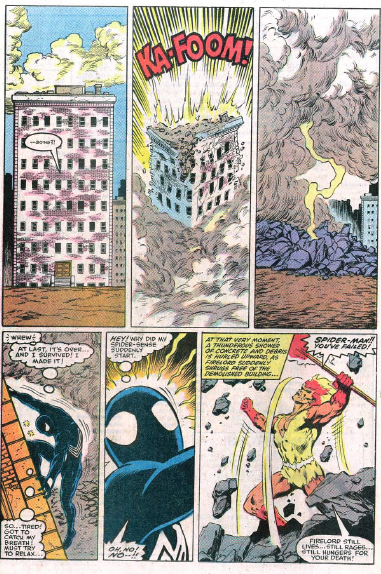 And yet despite the riskiness and moral dilemmas all of Spidey’s chicanery cause, he still can’t defeat Firelord, which brings us to the “stand up and cheer moment:” when he essentially says “screw this” and starts punching and kicking Firelord with all of his might. Spidey notes that this approach is the one Firelord least expects and at this point has “nothing to lose.” And miraculously, it’s the one that works. When The Avengers finally arrive at the scene, Spidey says he hopes to just keep Firelord down until they handle the rest. Instead the supergroup finds that the former herald to Galactus has been soundly defeated with just a pair of super-powered fists and feet.

What makes this moment stand out so significantly to me is the fact that it serves as a reminder that yes, Spidey is just an awesome superhero because he’s the perfect balance of intellect and physical strength, but he’s also fully capable of handing out a serious beatdown when the situation demands it. Firelord was clearly just looking for a fight and by tap-dancing around this, Spider-Man was just exacerbating the situation. By selflessly recognizing that the only way he was going to end a very dangerous dilemma for many innocent people was to just take this guy on head-on, Spidey proved once again how he continually reinvents himself and finds a way to stand out above the rest of the comic book universe. And not only was Spidey’s approach with Firelord bad-ass, it also WORKED, which is why it got me on my feet and cheering.