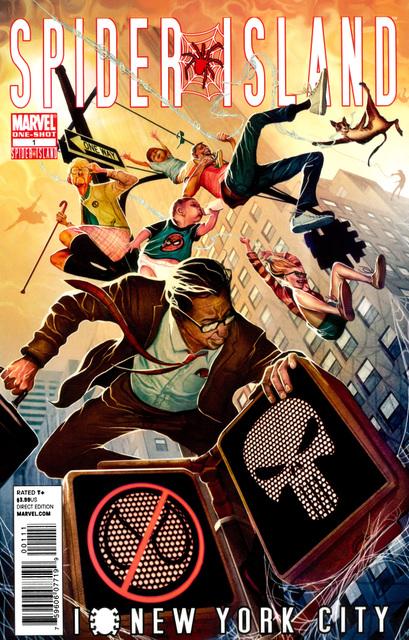 With Marvel pumping out so many one-shots and miniseries tied-in to the Spider Island storyline in Amazing Spider-Man, there were bound to be a couple of head-scratchers. Tie-ins featuring Cloak and Dagger, Venom and Spider-Girl made sense given their history with Spider-Man, while the Deadly Foes one-shot provided a little more background information on the Jackal and Hobgoblin’s plans. And The Avengers one-shot was just plain funny. Then there’s the I Love New York one-shot which doesn’t really seem to add much to the overall Spider Island story, nor was it as entertaining a read as some of the other miniseries. Instead, it just left me feeling a little flat and disappointed.

On one hand, a comic dedicated strictly to how “average” New Yorkers were dealing with the Spider Island outbreak seemed sensible and natural. It’s one thing for other superheroes to have to deal with new spidey powers but how is the single mom raising her kids, or the six-year-old child adjusting? And while I was not shocked by the “22 Short Films About Springfield” vignettes approach to this issue, there was one big overarching problem I had with the comic book that I don’t think I could look past: for a comic titled “I Love New York” there was little to nothing about it that screamed “New York City.”

I’ve been an official New York City resident for more than six years and have lived in the suburbs of what I’ll readily agree is the “greatest city in the world” my entire life, so while I’m sure there are plenty of others out there who claim more NYC-cred than me, I like to think I know a thing or two about Manhattan. Outside of a reference to the subway in one of the tales, I can’t think of anything in this issue that distinctively set the issue in the city outside of the fact that as fans of Spider-Man we’re supposed to know and accept that’s the setting and that’s where the bedbug infestation that has set off the Spider Island arc is taking place.

Compare that to the Cloak and Dagger Spider Island mini, which I thought was a great send-off of the changing demographics and current gentrification of New York’s once-depressed neighborhoods. In that case we have two Reagan-era characters who have been repurposed for a more contemporary setting and I’m am willingly surrendering to the idea that this is a comic book that’s taking place in New York City. The problem with the short stories in I Love New York is that they could be taking place anywhere –a bank robbery, a kid with Spider Powers, Spider-Cat? – where’s the love for New York? Where’s New York, period?

And perhaps because of my time spent in the city, I feel extra protective of its image. If I want a generic “big city” setting for my superhero adventures, I can certainly read about Metropolis or Gotham City, but something that I’ve always loved about Spider-Man is the fact that Marvel chose to stage the story in a real city, with real landmarks. Sure, there are arguments and disagreements about whether or not the bridge depicted in ASM #121 is supposed to be the George Washington or the Brooklyn Bridge, but the fact is, setting this universe in a real place is the main reason why we can have these debates.

Where are the flavor of the neighborhoods in I Love New York? Where is this bank robbery taking place? Is this down near the Financial District? Is this somewhere in midtown? The subway being portrayed seemed to be somewhere in Upper Manhattan where there are some pretty soulful, unique neighborhoods like Washington Heights. I’m guessing a lot of Marvel’s writers and artists live in or around NYC, so why not utilize some of their personal knowledge and experience for an issue like this?

Instead, it just feels disconnected – even more disconnected than the Avengers one-shot but with less humor, and less over-the-top characters and situations to make up for it. Politics aside, NYC is still a fairly diverse and unique city, and this issue just made it a feel a little too cookie-cutter for me. As a result, the I Love New York one-shot is probably the biggest miss of the series so far for me.