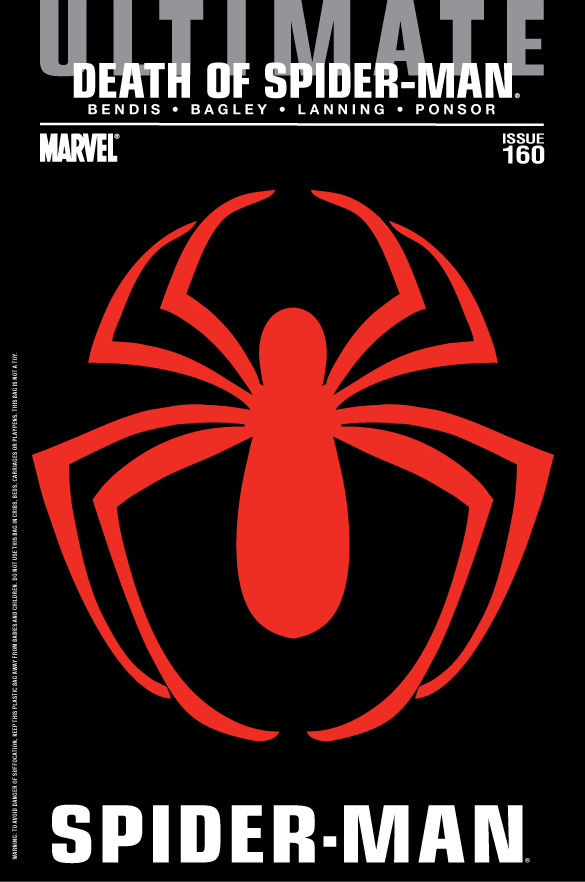 So despite the fact that I wasted some Internet space here a few months back disavowing the idea, I broke down last week and picked up a copy (two actually) of Ultimate Spider-Man #160, aka, “The Death of Spider-Man.” While I still maintain the belief that a “special” polybagged comic that features the death of a signature character is a little to reminiscent of an era of lazy and half-cooked ideas for the comic book industry, I am, after all, human, so my curiosity as to how Marvel would go about killing Spider-Man won over that little soap box I like to stand on.

For those of you who do not follow current comic book storylines, let me just clarify that the Spider-Man was killed, was the “Ultimate” version of the character – a pseudo alternate Marvel universe that was created about 10 years ago. The actual “Amazing” Spider-Man, the one whose comics I collect and primarily write about and the one who goes back to the early 1960s, is alive and well. He’s still Aunt May’s nephew, he’s still Carlie Cooper’s boyfriend, he’s still a member of both the Future Foundation and the Avengers.  Marvel chieftan Tom Brevoort does a decent job explaining how Marvel communicated the difference between the two universes to the media, who were all over this death of Spidey story last week.

The point is, in reality, nothing has changed with Spidey. Though that depends on who’s version of reality you subscribe to – the Amazing one or the Ultimate one. I’m an old school guy, so I’ve always been a bit averse to the “Ultimate” universe, trying on multiple occasions to get into it based on what other comic book fans were telling me, but failing because the “Amazing” Peter Parker/Spider-Man I have come to adore, is a fully fleshed-out character and a younger, more immature version of him in the Ultimate series just doesn’t excite me as much.

But as a longtime Spider-Man fan (regardless if it’s Amazing, Ultimate or any other adjective) I had to see how Marvel went about doing the deed, even if it takes place in a fake alternate universe. Was Marvel going to kill Peter Parker or the character of Spider-Man? Who was going to kill Spider-Man? Would his death be in vain? Would it be conclusive? What is a world without Spider-Man like?

The issue answered nearly all of these questions for me. While reading a bit about Ultimate #160 last week prior to its release, on one blog (I can’t remember the name and I’m too lazy to find the link), the author was talking about the recent wave of superhero deaths and mentioned for an effective death, the audience needs to believe the Superhero “earned” it.

Perhaps because I was reading the issue as someone who’s ambivalent to the Ultimate universe, but I actually believe in Ultimate #160 Peter Parker “earns” his death. For one, he’s killed during a battle with the Green Goblin, an arch-nemesis who has a lot of history with the character. Compare that to Superman’s “death” in the 1990s to a relatively new villain, Doomsday. There’s just something cheap about creating a new character to automatically be big enough, strong enough and/or fast enough to kill a long-standing hero like a Superman or a Spider-Man. We’re talking about decades of failure here for the rest of the supervillain universe. And then this one new guy walks in and takes care of business over the span of a few issues? It’s like the amp that goes to 11. Yeah, there’ death and destruction, but is it really earned?

I’d rather see a historic villain who becomes so obsessed with killing the hero, he becomes resourceful and/or desperate enough to pull it off. In Ultimate #160, Osborn is so doped up on his Goblin serum that he’s at his strongest and most powerful, even if his brain becomes scrambled eggs. Still, he’s smart enough to intentionally seek out Peter Parker to kill him.

Now, another key element in “earning” a death is the idea of the hero making the ultimate sacrifice. I’m calling this the “Jesus Complex” because I can’t think of a better term for it, but the fact is, people respond to a hero sacrificing his own well-being for the sake of those he loves. You obviously don’t get into the superhero business without these altruistic qualities. But a hero also can’t go out into battle and just lose and die. There has to be a sacrifice for the greater good.

In Peter’s case, he’s half-dead anyway when Osborn stomps through and Aunt May, Mary Jane and Gwen Stacy are all there in harm’s way. In a callback to the very first roots of the Spider-Man character – not just the Ultimate version mind-you – Peter acknowledges to himself that he has to protect his Aunt in a way that he failed to protect his Uncle when he was shot by a burglar earlier in the series (the origin tales of Ultimate and Amazing are obviously similar). So after the Goblin is temporarily knocked out, Peter picks up a van and smashes him with it, causing an explosion in the immediate area that kills both Spidey and (we think) the Goblin. After being thrown by the explosion, Aunt May and company rush to Peter’s aid where he tells them “I did it.” So in his last moments he knows despite his imminent death, he accomplishes what he set out to do, which was end the threat of the Goblin once and for all (we think). And of course, Peter’s sacrifice fully sinks in when we see he is reunited with his deceased Uncle, the one who’s death drove him into the life of a masked superhero/vigilante.

So now the next step for Marvel is how to approach a universe without Peter Parker. They’re apparently ready to reboot Ultimate Spider-Man with somebody new under the mark, but there also needs to be an appropriate amount of reacting and mourning throughout this entire universe for me to be fully convinced that Marvel successfully pulled this off. Marvel has already announced that they’re going to do this, so perhaps the Ultimate universe will siphon a few more of my hard-earned bucks until this is all fully sorted-out.