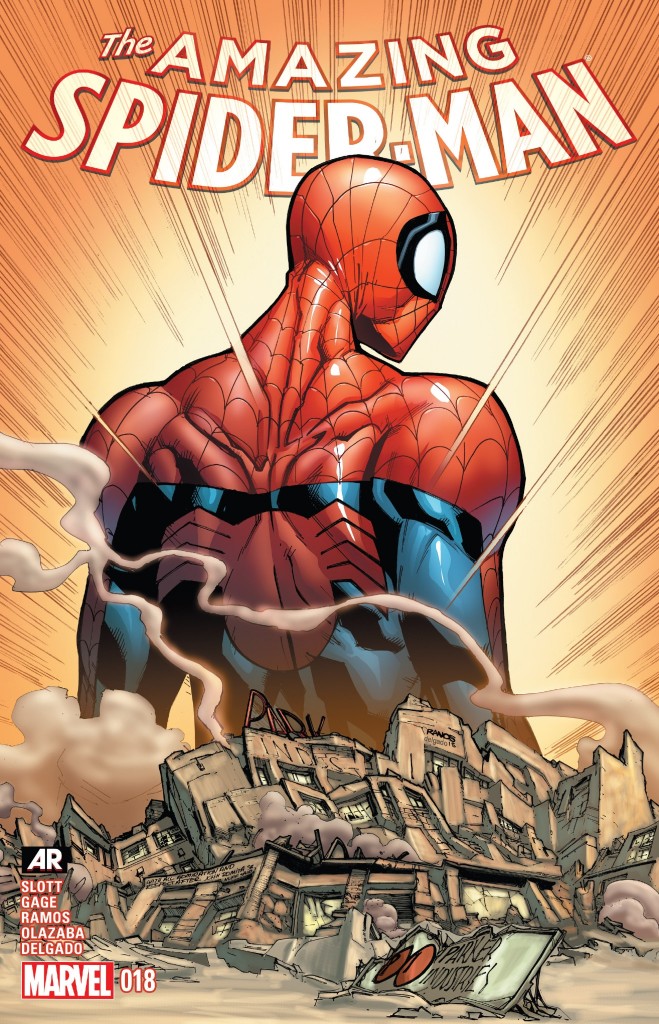 While this most recent arc of Amazing Spider-Man has clearly lacked the pomp and circumstance of “Spider-Verse,” or “Goblin Nation,” Amazing Spider-Man #18 still reads as an anti-climatic finale for a series that is set to go on some semblance of a hiatus while Marvel gets its Secret Wars on the next few months.

There’s obviously no hard and fast rule that says the Spider-office needs to whet my appetite for “Renew Your Vows,” but with the way ASM #18 ends — everyone more or less standing around pondering what they’re going to do next after Parker Industries is reduced to rubble — one would expect some indication that there are significant changes for the Spider-universe on the horizon. Besides, Marvel has been hyping Secret Wars as “the end” for quite some time … why not actually get us to buy into those stakes rather than pressing the pause button on a storyline that is completely milquetoast to begin with. 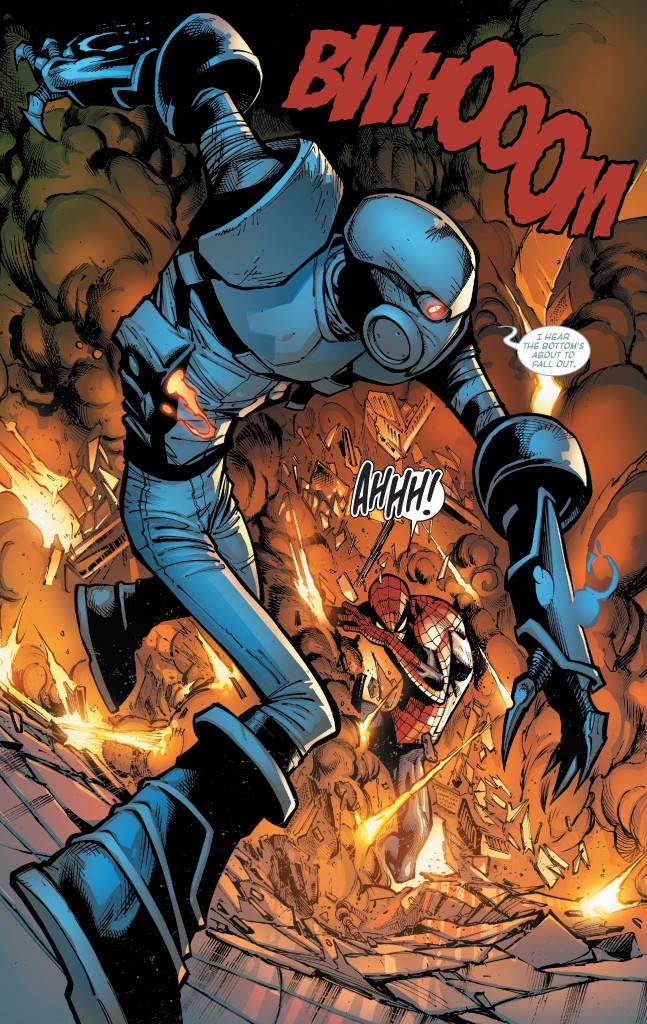 It’s easy for me to sit here at the other end of the computer screen and accuse a bunch of comic book creators of going through the motions; and yet I can’t help but think that I’ve been reading something the past three months being conjured up by a cadre of disengaged writers and artists who had bigger things on their minds than this Parker Industries arc. Even with all of my vitriol for “Spider Verse” — about as disappointing of a story that I’ve read in a Spider-Man comic — my issues with it were never about a lack of effort from Dan Slott or anyone else working on the series. But “The Graveyard Shift” or whatever Marvel wants to call this was a real bore to get through, in large part because the writing and artwork are uninspired and boring.

It’s hard to imagine that the Slott/Humberto Ramos combo was setting the world on fire only four years ago with “Spider Island” — a story that will be revisited in Secret Wars as a “classic.” Rather than revisit the “glory years” of a current creative team during a summer event, maybe Marvel should start seeking some fresh blood for one of their flagship books. 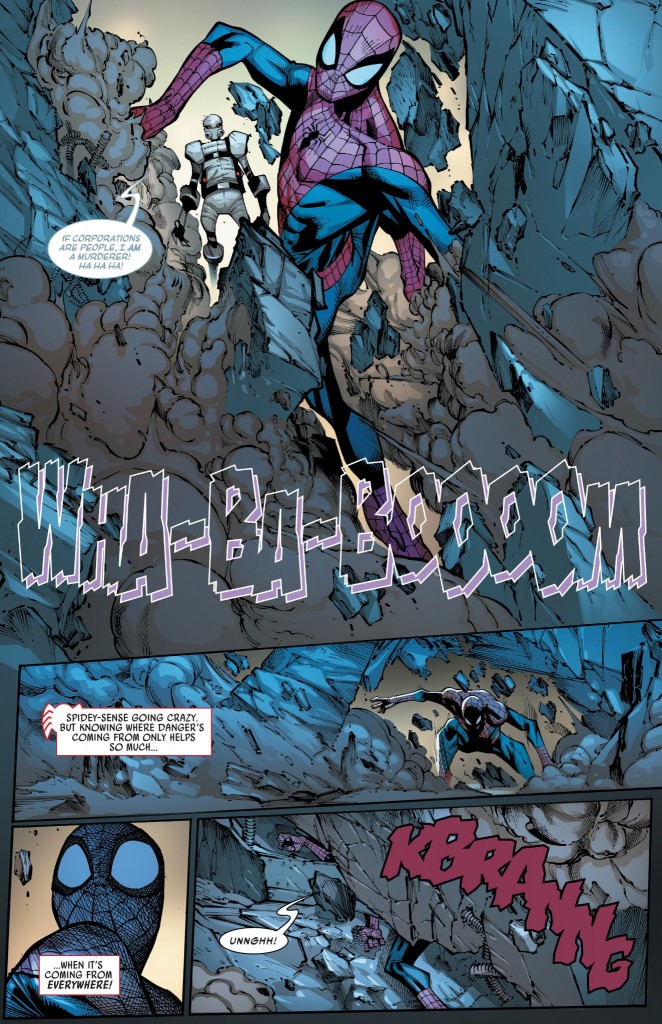 The actual flaws with ASM #18’s story are in line with my complaints for the 17 previous installments of Amazing Spider-Man dating back to Peter’s return (a year ago for those keeping score). ASM is a superhero book where the titular superhero rarely gets to do super-heroic things without an unsolicited boost from one of his trusty sidekick/Slott creations. This time around, Spidey can’t even handle the Ghost — a faceless villain created by David Michelinie for his landmark Iron Man run in the early 1980s — without needing rescuing from plucky Anna Maria and Clayton “Crash” Crain (who I still have to stop myself from calling Alpha).  It’s not that I expect a character with such pronounced vulnerabilities as Spider-Man to always be 100 percent on top of his game, but this is a sequence we’ve all seen played out over one variation or another for the past 12 calendar months, whether it involves Silk, the Spiders, Anna Maria or whoever. It’s really time for Slott to find a new trick up his sleeve when it comes to Spidey and his supporting cast.

There’s also still the nagging problem of there being no emotional stake in the actual consequences of this story. We are led to believe that because of his double life as Spider-Man, Peter is unable to successfully manage his own company and employees. But Parker Industries was still primarily depicted as an arbitrary plot device for most of the past year. We never got any needed character work that would have shown readers why Parker Industries was so valuable to Peter and what its ultimate failure would represent. Instead, Peter was portrayed as being way over his head from the beginning, making the entire subplot even more superfluous — because why should I care about something the character himself doesn’t seem to care about? 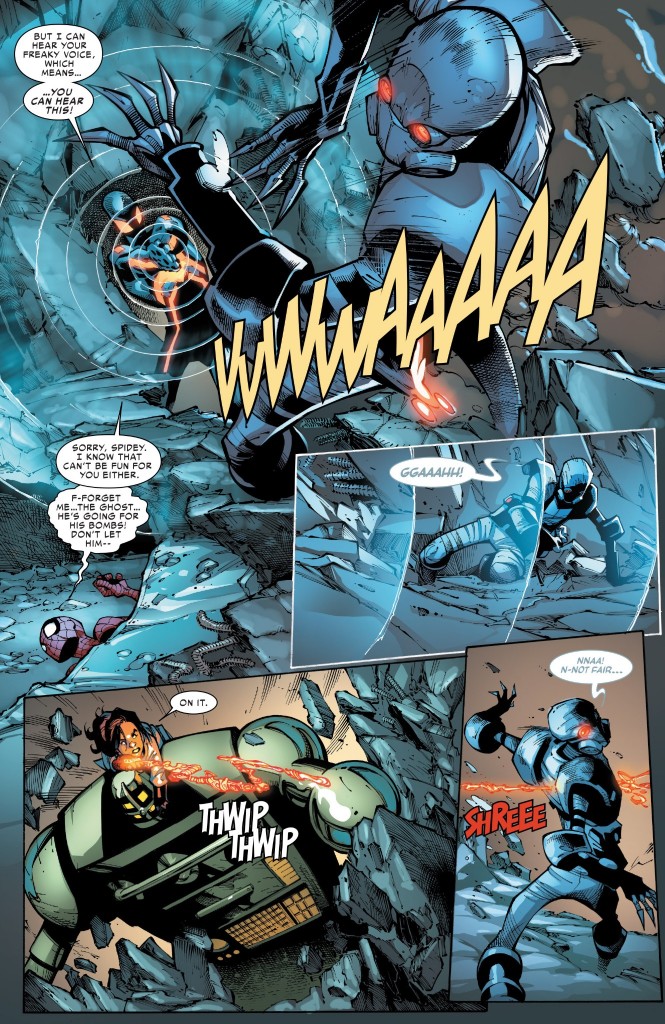 Nobody is paying me the big bucks to write Spider-Man, but I still think the better course of action for ASM the past few months would have been some kind of character-centric story involving Peter and Mary Jane that would have at least set the table for the alternative world version of the couple we’re about to get once “Renew Your Vows” kicks off in June. The last glimpse we got of MJ was a passing image of her turning the TV off while Spider-Man was parading around Manhattan in his skivvies. And yet we’re all supposed to magically care about this character again because Marvel and Slott are treading dangerous ground by rehashing one of the most reviled Spidey stories in the character’s history. The only reason why a storyline like “Renew Your Vows” even warrants a passing glance from Spider-Man fans is because of how effectively the two characters were used together in the few years leading up to “One More Day” in the mid-2000s. Beyond any absurd deals with the devils, and all of the other factors that made “OMD” such a horror show, it’s also worth mentioning how the Peter/MJ dynamic was at the top of its game before Marvel’s editorial department decided to take a sledgehammer to it. 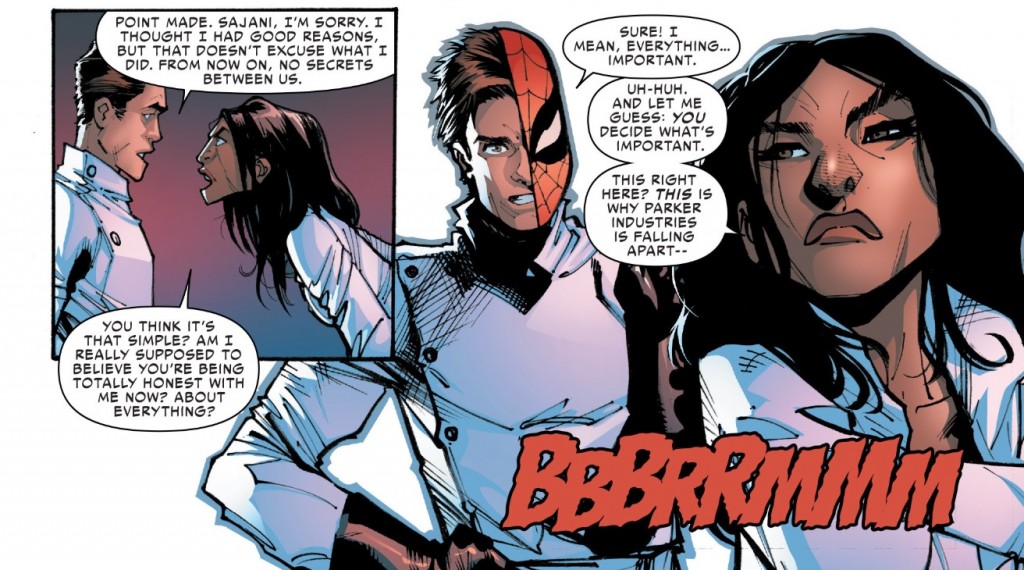 But at this rate, “Renew Your Vows” appears to be nothing more than a glorified “What If?” story that will likely prey on the more emotionally volatile segment of the fan base, while more rational/casual readers will likely shrug at the idea of Peter being married again to a character that is more or less a perfect stranger in today’s universe. That’s because the past few months have been a pointless exercise in spotlighting characters and notions that seem to have more value to the creator than to the actual readers. This is not me spouting off about being resistant to change or new ideas, but rather a declaration of indifference for what is being regularly churned out in the pages of my onetime favorite comic. Then again, when it comes to ASM, it appears that boredom is currently a two-way street.