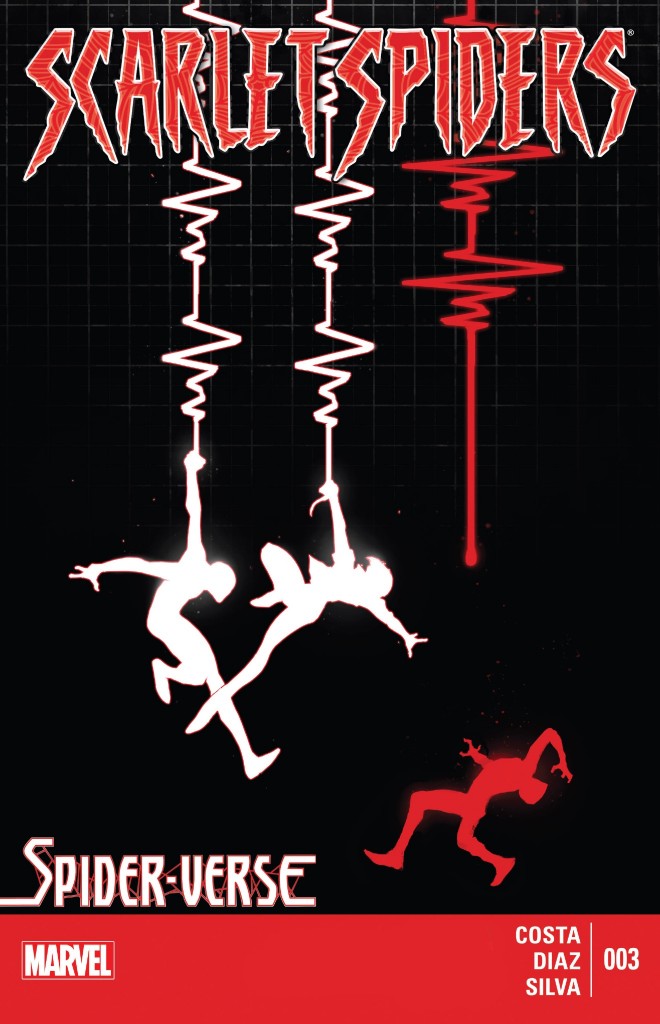 Since kicking off in November, the Scarlet Spiders miniseries has probably been the most integral to “Spider-Verse’s” larger narrative other than Amazing Spider-Man (though, based on the last two issues, claiming ASM has been integral to anything is debateable). So it didn’t surprise me that in its third and final issue, Scarlet Spiders delivered probably the most dramatic and emotional moment in this otherwise milquetoast storyline in its depiction of the clones’ bittersweet victory over Jennix and the Inheritors.

While we still don’t have a particularly clear picture of how the Spiders are going to triumph over an otherwise unbeatable foe in the Inheritors (who needs strategy when you have “every Spider-Man ever”), Scarlet Spiders writer Michael Costa and artist Paco Diaz have done a commendable job in demonstrating how destroying the Inheritor’s clone plant was a critical part of at least slowing these monsters down. It’s one thing to have to find a way to physically beat the likes of Morlun and Daemos, but if they’re going to keep on regenerating every time one gets taken out, that certainly puts the Spiders against insurmountable odds. 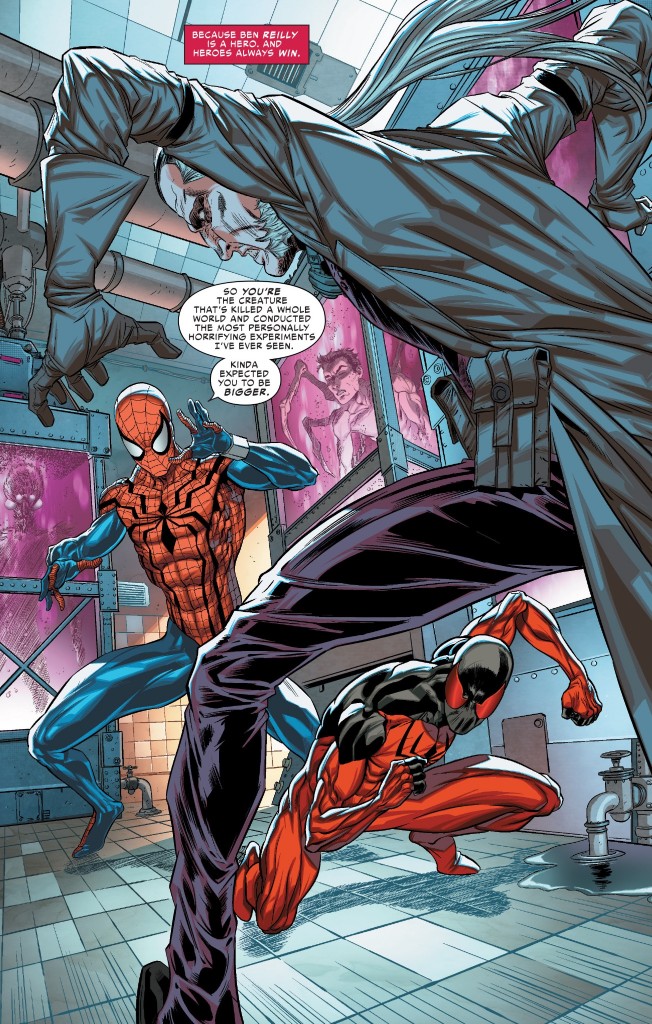 Of course the bigger question remains whether or not the misadventures of Kaine, Spider-Ben and Ultimate Jessica Drew really needed its very own dedicated miniseries, or whether or not the highlights of their stories could have somehow been incorporated into ASM. Scarlet Spiders #3, like each of the two earlier issues, contains quality moments, but I’m not sure if there’s enough “there” there to justify a three-part miniseries that was essentially three characters walking around a building culminating with a boss fight. Jessica’s character seemed criminally underused, and while Spider-Ben totally gets his moment in the sun this issue when he sacrifices himself to blow up the Clone plant, it’s not like the creators gave us all that much to cling to with the character in the previous two issues.

Kaine remains probably the best written character in this series, though at the end of the day, how hard is it to nail the tone for a cantankerous loner anti-hero type? The world of comics has been filled with Kaine analogues (or better put, Wolverine analogues) for decades. The only reason why Kaine works so well in Scarlet Spiders and in some of the other books he’s recently appeared in is because he stands in such stark contrast to Peter and the rest of the Spiders not named Otto Octavius. With his personality, Kaine has a distinctive voice – something that cannot be said for many other Spiders appearing throughout “Spider-Verse.” 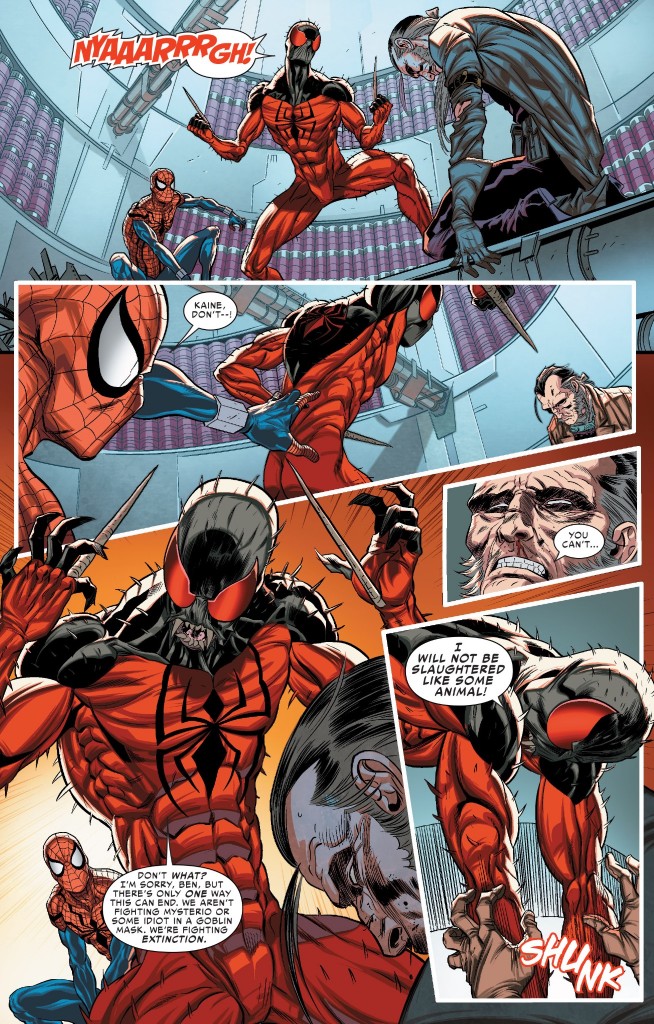 But obviously the moment everyone is going to come back to in Scarlet Spiders #3 is Ben’s sacrifice. Putting aside the glaring typo regarding the name of a certain police captain who died in a very famous Silver Age issue of Amazing Spider-Man, I did find the “this is your life Ben Reilly” sequence to be quite effective in terms of building the pathos for the character for when he inevitably bites the dust. If I could be just a little bit nitpicky (it’s not like I haven’t been nit picking “Spider-Verse” to death over the past two months), I think there’s still some level of a reader disconnect for me revolving around the fact that this iteration of Spider-Ben is not exactly the one who starred in the “Clone Saga” all those years ago. Sure, they share a lot of similarities, but it was established from the get-go that they were not one and the same and that the 616 Ben Reilly is still a puddle of clone goo somewhere. 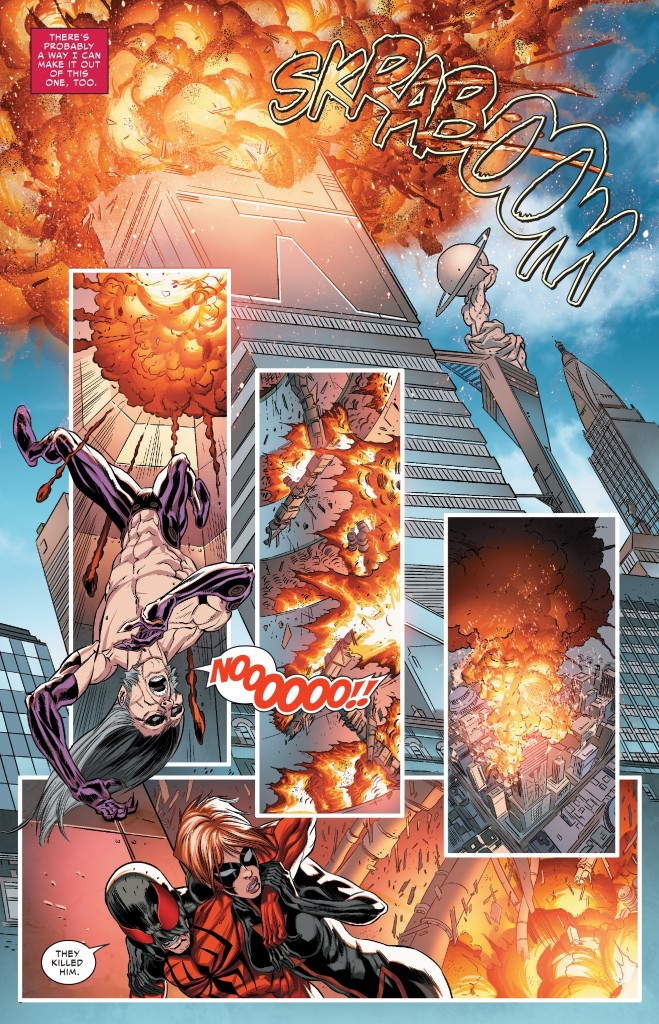 I guess it really doesn’t make that much of a difference, but this connects to some of the larger issues I had with “Spider-Verse” from the get-go: it would be far easier for me to become engaged with these characters if the possibility for different iterations and analogues wasn’t so apparently endless. Once new Spiders started to be invented for the purposes of this event – at least new Spiders that were variations of existing ones like Civil War Spider-Man or this version of Spider-Ben – it cheapened the impact of whatever happened to them on the page. What I mean by that is, why should I care about what happened to this Spider-Ben, if there’s potentially another “undiscovered” one out there? You’re telling me in this infinite mass of parallel worlds, this is the only Spider-Ben left in the Multiverse?

Yeah, yeah, I’m being a stickler, but I don’t think it’s a completely illegitimate gripe. It’s not like Marvel resurrected 616 Ben for this event only to watch him sacrifice his life and die again. If that were the case, I think I would have felt far more for the character than what I inevitably felt for him in Scarlet Spiders #3. Really, this is just some character that was created for the sole purpose to be sacrificed to the gods of plot development. He was completely dispensable from the get-go and it thereby took a lot of the tension out of the moment when he was eventually offed. 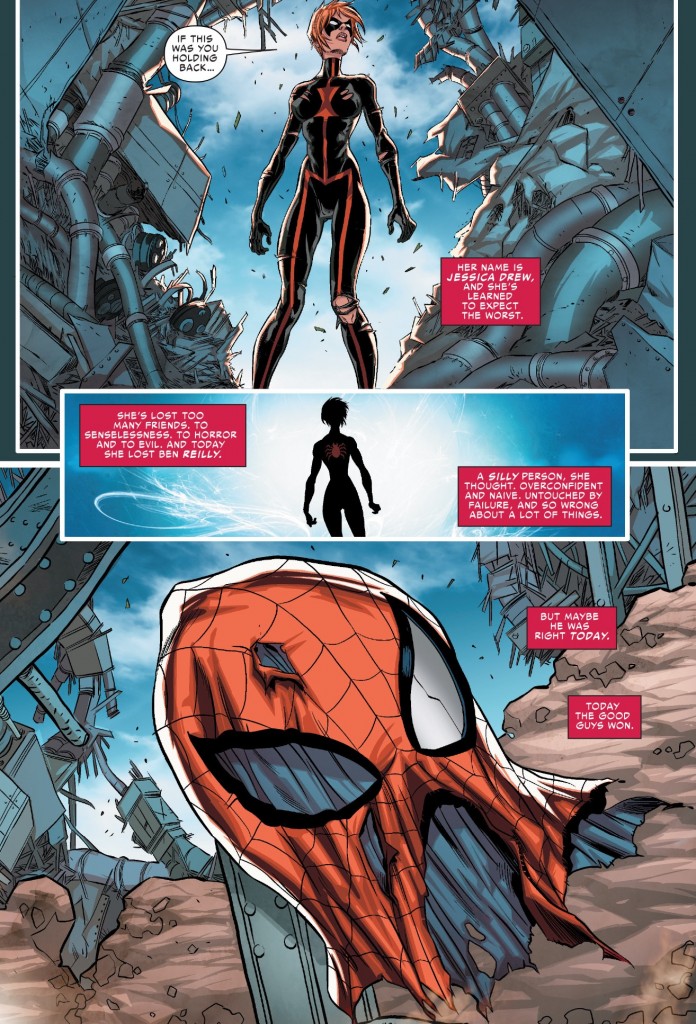 And that’s yet another larger flaw of “Spider-Verse” – its predictability. That’s not to say I can hazard a guess as to how the Spiders will save the day, but it’s become abundantly clear that the likes of Spider-Woman, Silk, Spider-Gwen and of course, Peter, are off-limits in terms of the body count. And not that I WANT to see those characters die, it’s easy to deduce based on the template that’s been established who’s fair game and who’s not. For a story that’s supposed to be about life or death for many of these characters, it just seems to be sorely lacking moments that elicit anxiousness from its readers.