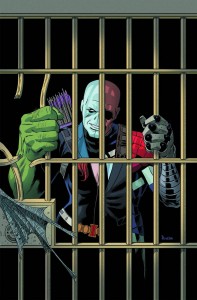 Given the ending to Superior Spider-Man #9 earlier this month, I can’t say I’m all that surprised by the contents of Avenging Spider-Man #20, but all the same: DAMN, Marvel went ahead and did it … they’ve made Spider-Man into a full-fledged baddie.

At least that’s the direction Chris Yost seems to be going in Avenging #20, the first comic starring the Superior Spider-Man to come out since Spider Ock received his “Parker-echtomy” and the lingering traces of all that weak-willed “power and responsibility” hooey were erased from his brain. Spider Ock has been a bit of a jackass since the status quo shifted in January, but in earlier issues of Avenging and Superior, Yost and Dan Slott had made sure to demonstrate that there’s a little boy inside of the villainous Otto Octavius that sought redemption. Seeing a character wearing a Spider-Man costume who seemingly doesn’t give an “eff” about trying to do good and is instead more focused on freeing one of his former supervillain pals from the past is a jarring experience, regardless of how much I enjoyed Superior #9, and how braced I was for the storyline to journey to this much darker place.

Sure, in recent issues of Avenging, Yost ended each comic with some cryptic developments that saw Spider Ock working to get the Sinister Six back together. Given that Chameleon is now a prisoner of the S.H.I.E.L.D. super spy agency, one would have to assume that Otto would find a way to get him out of custody and get the band back together. But Otto’s manipulations in Avenging #20 are inherently evil. He stages a conflict with the A.I.M. (Advanced Idea Mechanics) as a way to sneak on board the S.H.I.E.L.D. helicarrier that’s currently transporting the Chameleon and then disrupts the vehicle’s security system in order to get him off (which then allows a rogue group trying to take out the Chameleon so he doesn’t spill any KGB secrets). 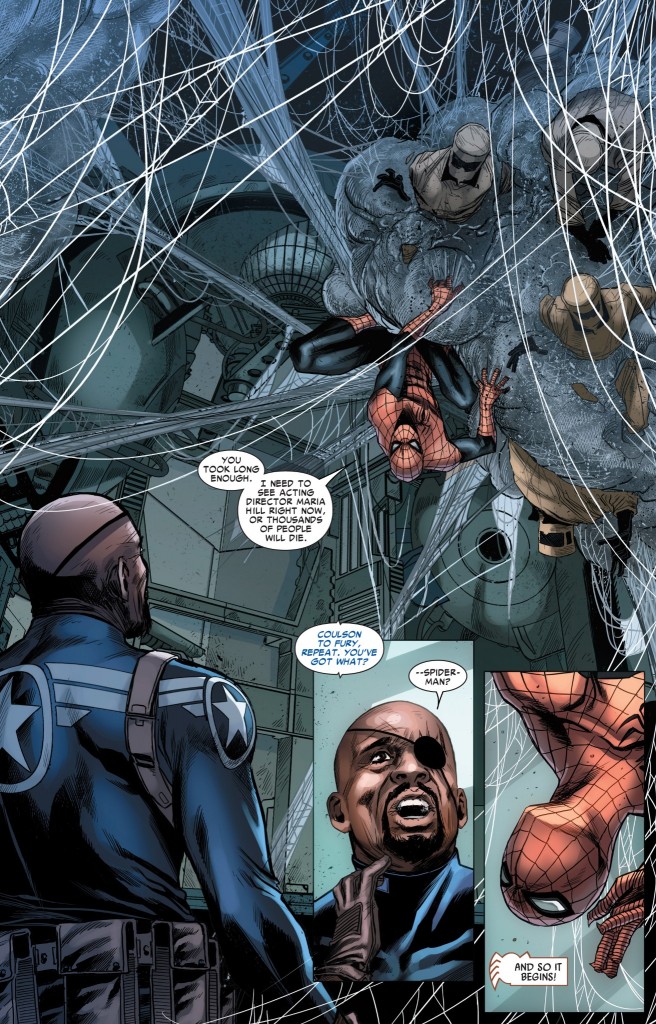 There’s very little redemption to be found here for Spider Ock. He continues to be a jerk to his fellow superheroes/Avengers brethren which is just same old same old for the character since the status quo shift (Hawkeye is a dolt, Black Widow needs to make herself more useful, etc), but unlike past “team-up” issues with the Future Foundation or Thor, there’s no moment  where I’m thinking, “A ha! Otto is learning something about being a hero just to spite himself.” 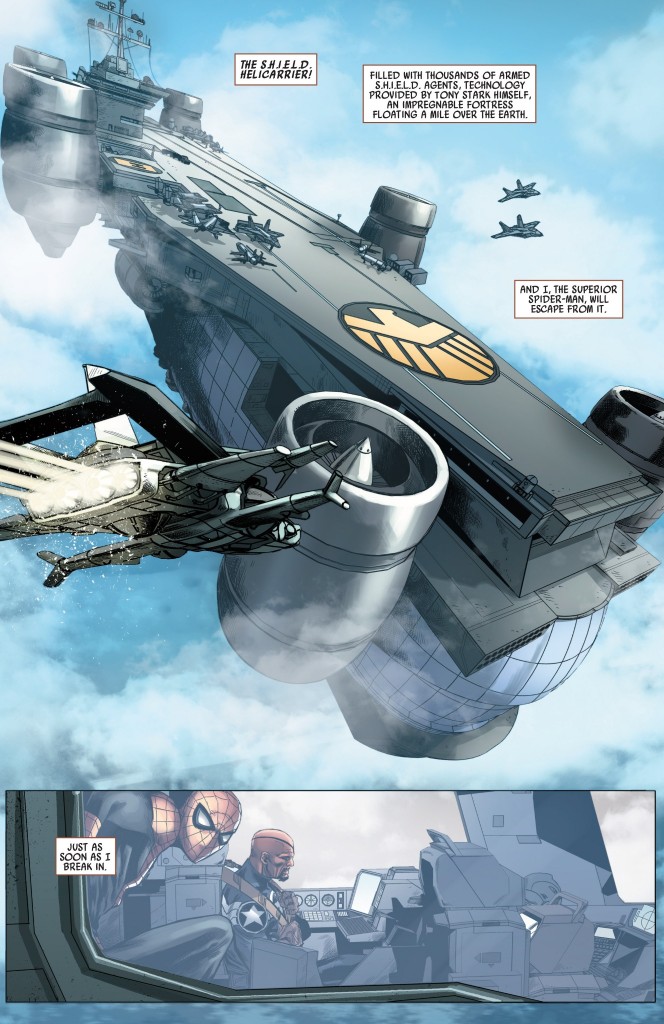 In many ways, this issue mirrors in tone and theme Avenging #15.1, the first comic to be released immediately after the dramatic status quo shift in ASM #700. I feel like readers are being reintroduced to Otto as Spider-man a second time, and similar to issue #15.1, we immediately get the sense that while he’s happy to have conquered his long-time nemesis Peter Parker, Otto is not really enthusiastic about carrying on the do-gooding  legacy of his predecessor. Keep in mind, when Avenging #15.1 was released, Astral Peter had not yet been unleashed upon the world, quieting the “how could you kill Peter” worrywarts. Given that the subplot of Astral Peter was seemingly forced upon Dan Slott by Marvel for the first nine issues of Superior, I wonder if Yost is borrowing Spider Ock’s characterization so liberally from the point one issue because THIS is truly the character everyone latched on to a Superior Spider-Man driven title wants to write about.

It’s interesting … I was just about to write a sentence about how I have some real hesitance about my ability to tolerate an arrogant jerk with no redeeming qualities as the star of my favorite comic book, and instead I deleted the sentence because I realized saying that would make me a total hypocrite. Two of my favorite shows on television currently star awful human beings – Breaking Bad, which features chemistry teacher turned murdering drug kingpin Walter White, and Mad Men, which features an alcoholic, womanizing fraud in Don Draper. And in both of these shows, and others (The Sopranos), I’ve found myself rooting for these anti-heroes to succeed, even against the best interests of the “good guys” like the police, the DEA or anyone with a vagina that tries to forge a bond with Don Draper. 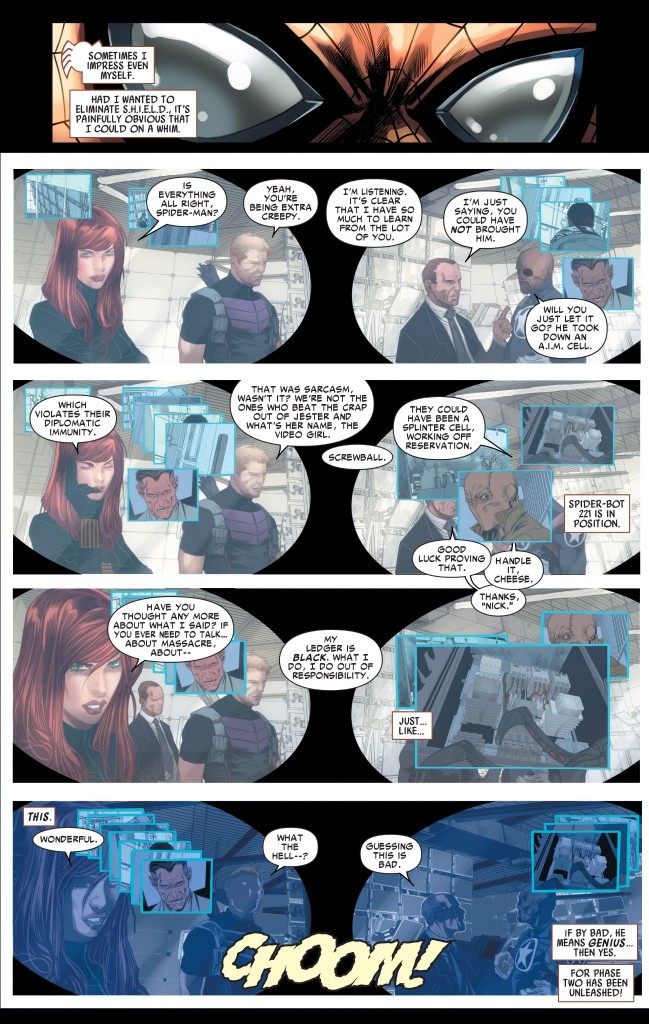 So what does this all ultimately mean about my consumption of Superior Spider-Man? It means like the creative geniuses behind Breaking Bad and Mad Men, it’s up to Chris Yost and Dan Slott to keep me engaged in a Spider-Man character who’s clearly more bad than good. I still think the whole Superior-era is a fantastic way to reinvent and eventually redeem a classic Silver Age creation in Doctor Octopus, but if the creators want to tell a different story, I still intend to give it a fair shake. I just hope future issues of Avenging, and for that matter, Superior, try not to waffle on their new direction. It doesn’t hurt for these stories to not seemingly repeat themselves in style and tone. I’ll chalk up some of the “meh” qualities of Avenging #20 as Yost and the rest of the creative team dusting off the mothballs of Spider Ock’s original concept and subsequently having a hard time putting the engine into drive. If things still come across as circuitous and repetitive five issues from now, then things could get dicey from my perspective as a long-term reader/supporter.