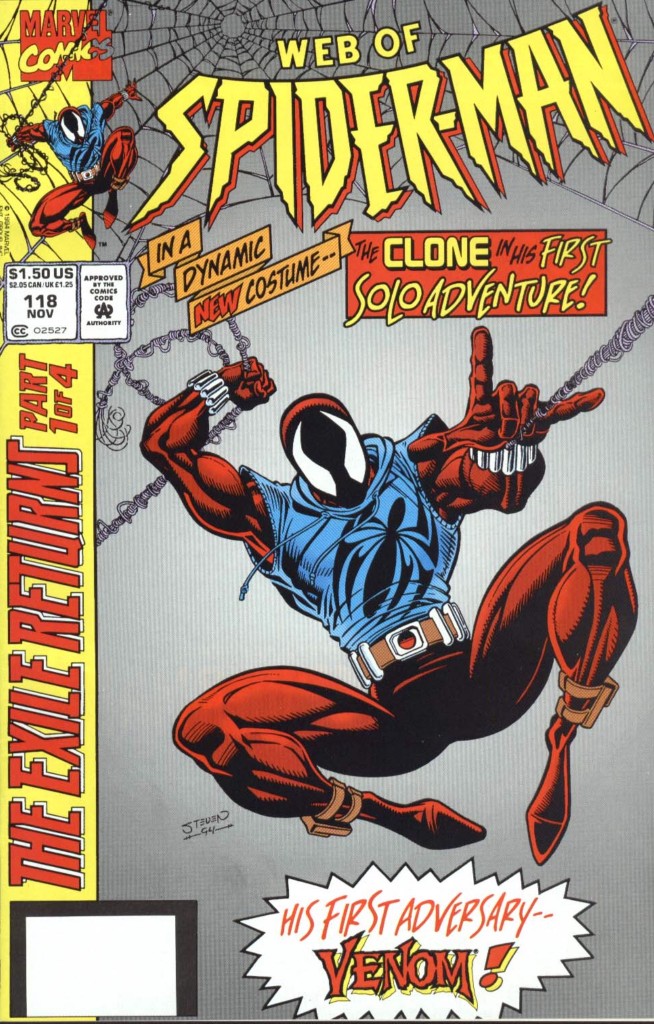 After formally reintroducing the clone in the “Power and Responsibility” arc the month before, Marvel immediately starting mixing things up a bit with its Spider-books in order to advance the “Clone Saga.” While Peter Parker continued his descent into madness in the pages of Amazing Spider-Man and Spectacular Spider-Man (with both J.M. DeMatteis and Tom DeFalco teaming up to write those interlocking stories), his clone, Ben Reilly was the primary focus in Web of Spider-Man and Spider-Man. This trend continued for four months (and two storylines), before both characters were brought back together for the “Smoke and Mirrors” arc – which for those keeping score at home, was the first true signal to readers that the whole “Clone Saga” was going to linger (because that’s when the Jackal and his 900 different clones were introduced into the game).

Despite the hard sell Marvel gives Ben in “The Exile Returns” – and boy, without even knowing that the “Clone Saga” was a long game, you can tell from his characterization in this story they want you to like him, really like him – in retrospect, breaking up the two spider characters between the four ongoing books was a pretty solid strategy from the “House of Ideas.” 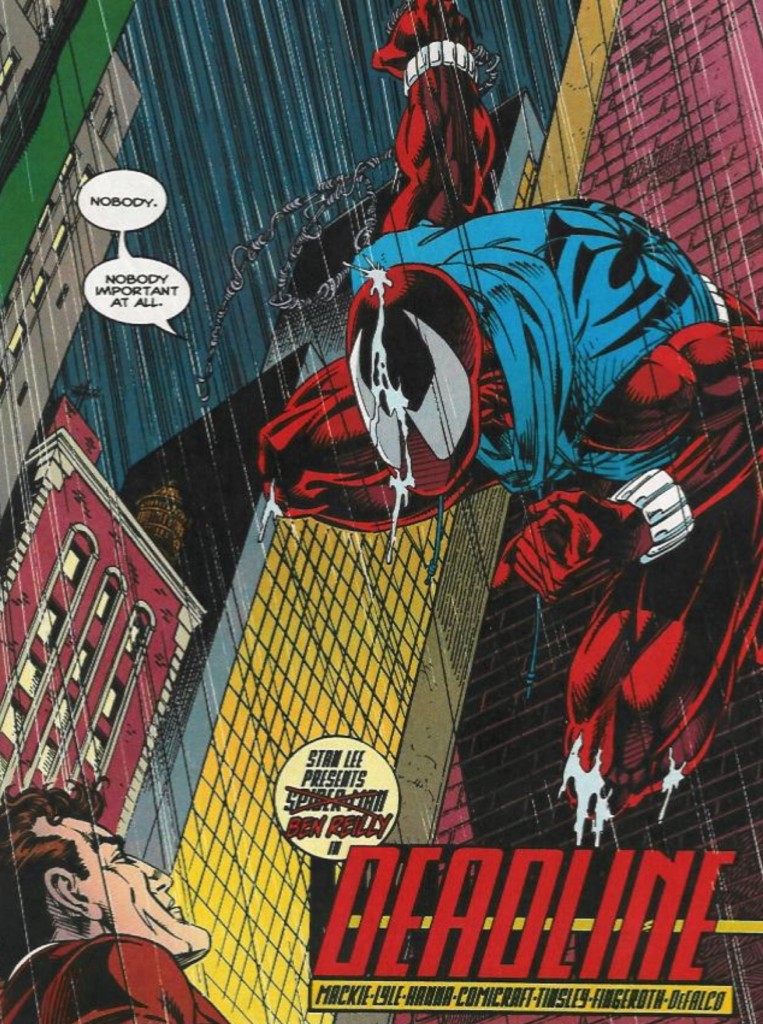 By doing it this way, Marvel allowed the character some room to develop and grow on readers, in what was unquestionably, the two “lesser” books in Web of and adjective-less, Plus, during my Daredevil-themed month in April, I wrote about the “Back from the Edge” arc in ASM and Spectacular that ran concurrently with “Exile Returns,” and when you consider all of the emotional drama Peter was going through at this point, nobody was going to want a break in that narrative to read about some silly clone that was just resurrected after nearly 20 years.

“Exile Returns,” opens with Ben attempting to make his getaway from New York City after finally reintroducing himself to Peter during “Power and Responsibility.” However, like Michael Corleone in Godfather III, Ben keeps finding himself getting sucked back into the fray, so he goes about rescuing babies and fainting women and taking care of all those other things that the Fantastic Four, Avengers, and apparently Peter, never had time for anymore.

Being that a series about a plain clothes guy rescuing civilians would never last more than a few months, even during the peak of the comic book industry in the mid-1990s, by issues end, Terry Kavanagh and Steve Butler give Ben a new costume (created by Tom Lyle) that’s a variation on Spidey – an all scarlet red suit with a blue hooded sweatshirt – and then found him a high profile villain to tackle. And trust me boys and girls, in the 1990s there was no higher profile of a villain than Venom. 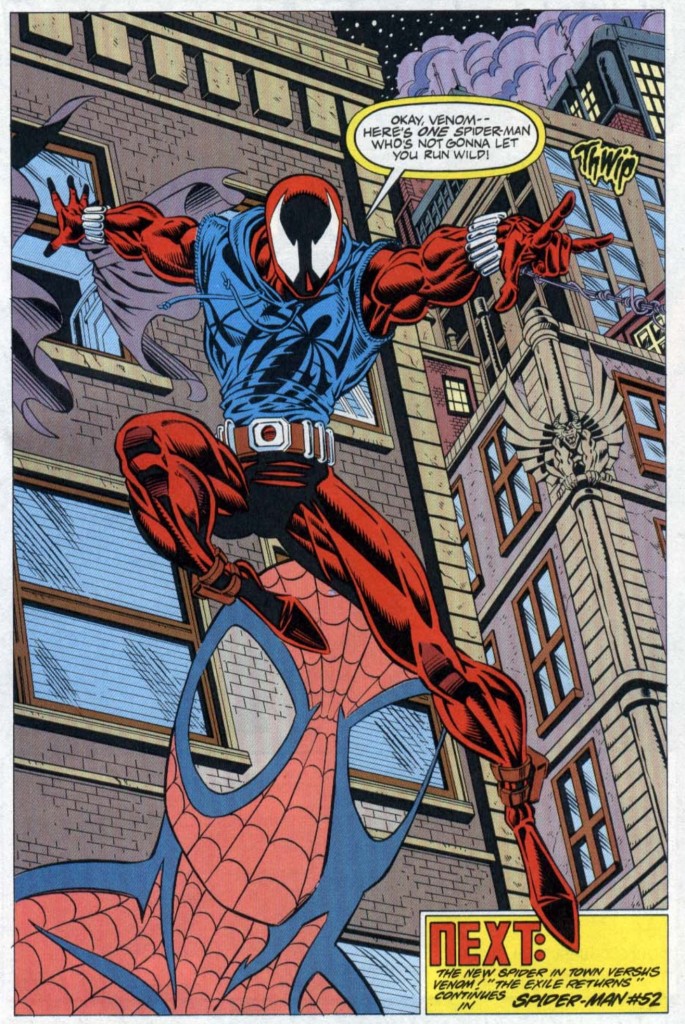 Meanwhile, when reading this storyline in retrospect, my own Spidey Sesnes were definitely tingling when Ben kept referring to a feeling of obligation and responsibility tethering him to New York City. For those looking for clues that perhaps Ben was not actually the clone but the real Spider-Man, this revelation was certainly something to stick a pin in and come back to. Of course, it could all be explained away that Peter’s clone inherited his memories, but scenes like this beg the age-old conundrum of mind versus soul. In other words, while a genetically engineering clone of Peter’s could have all of his memories and intelligence, would he have the emotional quotient to feel such profound things as guilt and responsibility for sins he didn’t hypothetically commit.

This could be a total overread on my part, but again, there’s definitely something in the text there to come back once the “Clone Saga” busted into its second act and revealed that Peter was the clone and Ben was Spidey.

Beyond power and responsibility, “Exile Returns” also goes out of its way to curry favoritism towards Ben from readers. One could make a drinking game and be drunk by part four with the number of teams the two creative teams (Howard Mackie and Lyle collaborated on the two Spider-Man issues) had Ben act just a tad self-righteous over the fact that a known-murdered like Venom/Eddie Brock was allowed by Spider-Man to roam free unhindered. 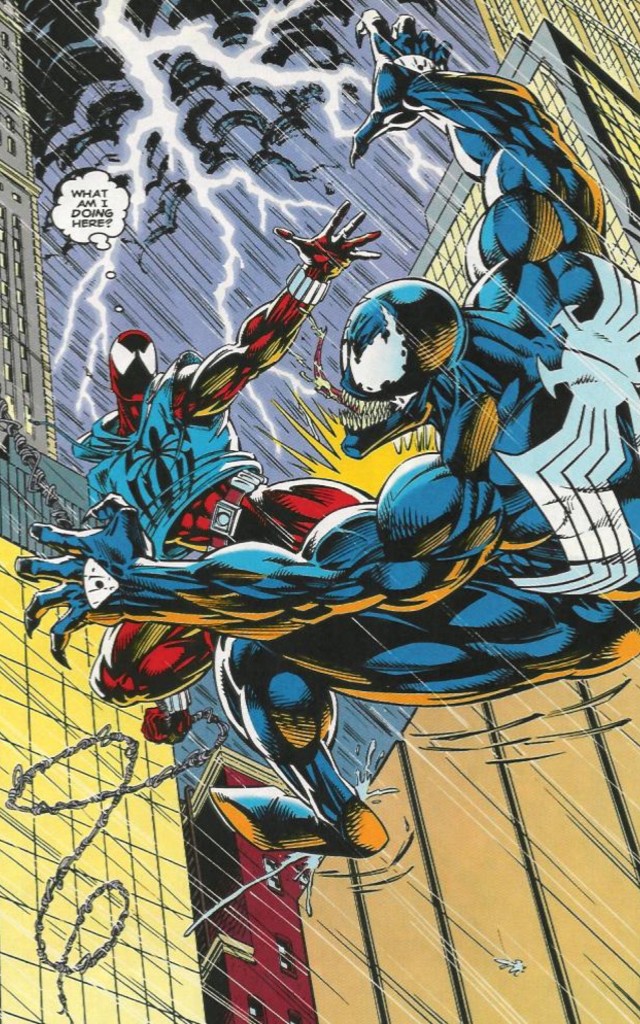 For the uninitiated, this storyline took place immediately following the ASM #374-375 arc and “Maximum Carnage,” where Spidey and Venom struck a “deal” saying Spider-Man would leave Brock alone while Eddie traveled out to San Francisco to be the “Lethal Protector” anti-hero. For an added tie-in to all this, “Exile Returns,” reintroduces another Venom spawn from the Lethal Protector miniseries, but this storyline doesn’t spend a terrible amount of time developing this subplot. Probably because even with Venom’s popularity, the comic book community was getting just a little too burnt out by symbiotes and their spawn at this point in history.

So Ben sets out to fight history’s greatest monster in Venom, and in doing so, we get the first appearance of two really cool weapons that became tokens of the Scarlet Spider’s arsenal. The first is impact webbing, something that’s just really clever and ingenious and would have been useful for Peter as well (and there’s another red flag for those keeping score of who’s who in the “Clone Saga” – how was the clone bright enough to develop such an effective weapon after living in exile for five years?). With impact webbing, Ben’s web shooters would eject these little balls that would then burst into webbing upon impact. He used the impact webbing to great effect against Venom, shooting a few balls of the stuff into his mouth, and essentially using the weapons to separate the symbiote from Brock. 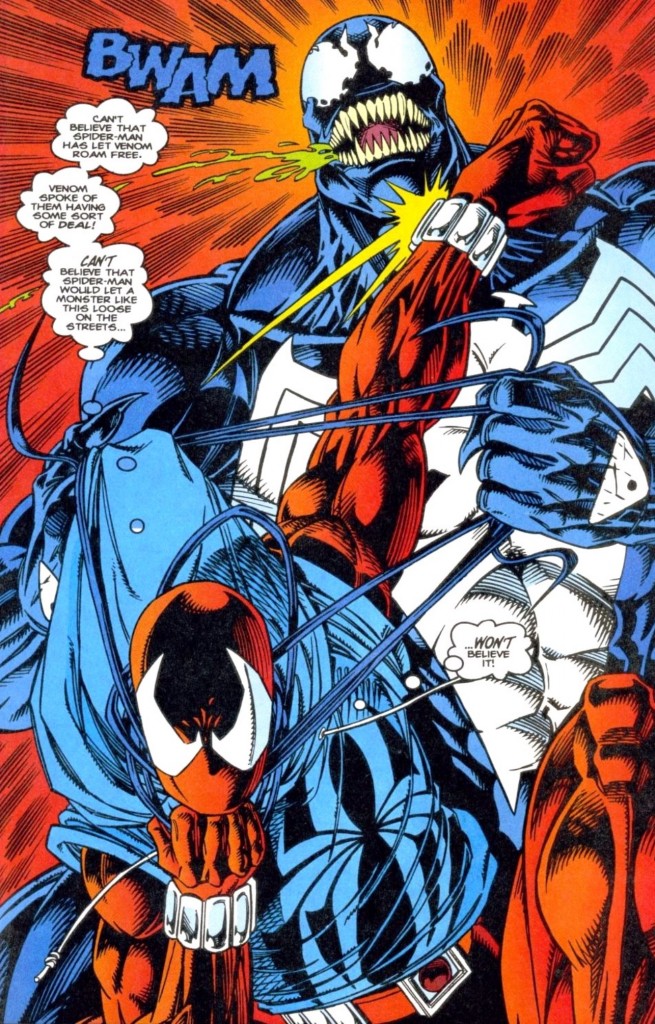 In addition to the impact webbing, Ben also busted out a stinger for the first time, a sharp tipped point that he used to puncture Brock. Definitely a bit extreme for a Spider-Man weapon, but again, where did Ben Reilly get all of these wonderful toys?

The final piece of historical significance from this storyline was this mysterious masked figure being introduced for – a large hulking being named Kaine who left a grotesque marking on the face of the people he killed. In terms of character introductions, the creative team here really nails the mystique and aura of Kaine, who resembles an absolute monster and appears to have a very uncomfortable fascination with the spider clone (Kaine would become even more fascinating when they use him to great effect to kill one of Spidey’s most iconic rogues in Doc Ock during the “Web of Death” arc). 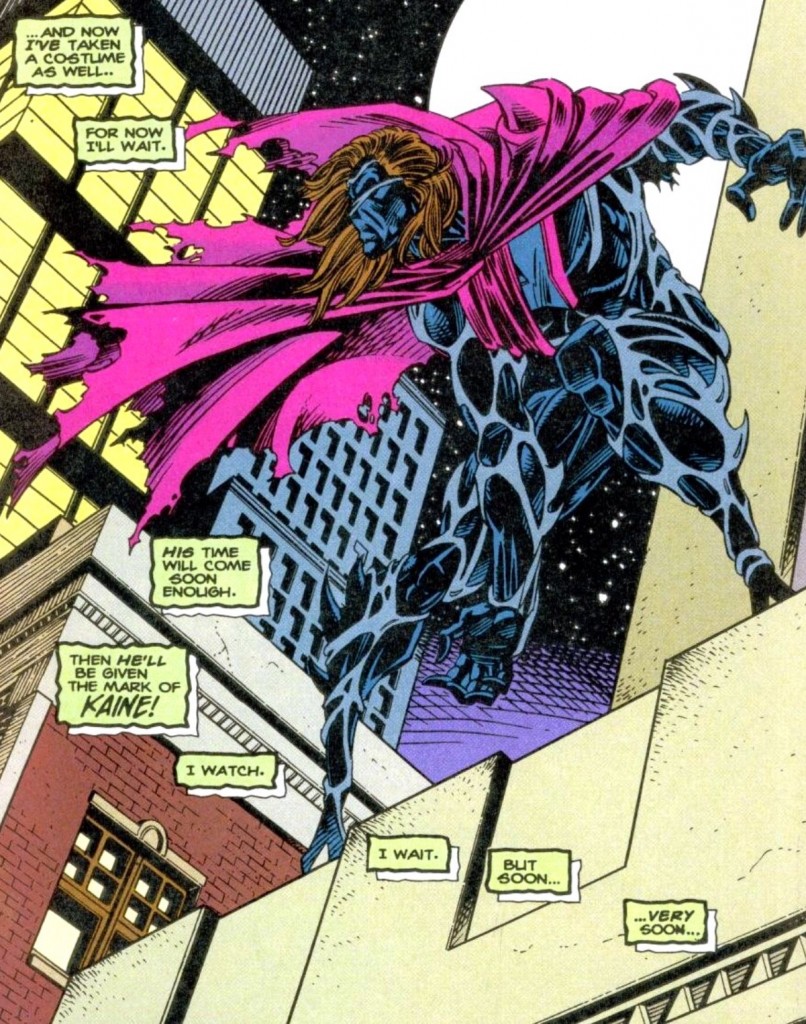 In true 90s fashion, “Exile Returns” is one of those storyline that seemingly packs a lot in (we’re also introduced to a new Daily Bugle reporter, Ken Ellis, who uses the Scarlet Spider as a way to advance his career), despite the fact that it’s totally decompressed and about two installments too long. But complaining about that every time I write about the “Clone Saga” is about a pointless an exercise as me wondering why Brian Michael Bendis needs seven months to unravel the opening arc in his new Miles Morales: The Ultimate Spider-Man series. Still, even with the added padding, the “Clone Saga” still shows a lot of promise at this stage, especially in how it keeps the focus strictly on Ben and thereby creating a likeable character for readers to follow.