When I read a few months ago that July’s “dramatic” new status quo shift in Superior Spider-Man #14 would deal with “Shadowland,” I had to rack my brain for a minute to know what the heck the mighty folks of Marvel were talking about. Shadowland? What’s a Shadowland? The series is barely three years-old but was completely off my radar all the same, probably because after reading the arc, it’s obviously a Daredevil story first and foremost and I wasn’t reading Daredevil comics at this point in time (though surprisingly, Mark Waid’s Daredevil remains one of the few non-Spider books I still pick up with regularity because the writing is that good). 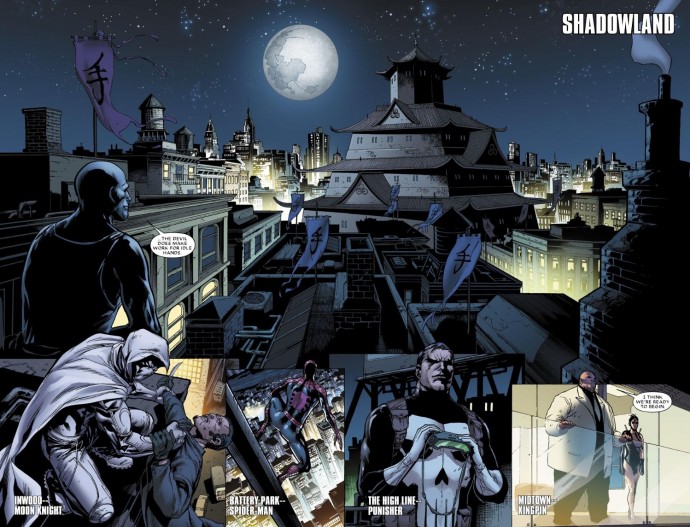 Despite my own ignorance to its existence, even after reading the Shadowland mini-series and the Spider-Man one-shot tie-in, I didn’t walk away from the experience thinking I missed something monumental. It’s a fine enough story, but with status quos shifting and cascading in new directions seemingly every other week in the Marvel universe, there’s nothing about the series that strikes me as a monumental “moment” worthy of anyone’s pantheon of Marvel comic books. In fact, I go as far as to say if it wasn’t for the “Shadowland” reference in the July Spider-Man solicitations, this mini-series would have floundered on as just another blind spot for me – something I would be none-the-wiser too.

If I could pinpoint any insights that I either gained or had reaffirmed after reading “Shadowland,” it’s that for all of Spider-Man’s misery, bad luck, guilt and so forth, if there’s at least one major Marvel superhero who unquestionably has it worse than him, it’s Daredevil. Matt Murdock/Daredevil is Marvel’s quintessential dark hero, a man, who aside from Stilt Man and a few others, faces off primarily against the scum of the criminal underworld, rather than fantastic, over-the-top villains like the Green Goblin, Doctor Octopus or Doctor Doom. As far as villains go, Bullseye is every bit a lunatic that Cletus Kasady/Carnage is, except Bullseye has actually caused deeply personal pain and anguish in Daredevil’s life. All of Murdock/Daredevil’s lovers end up dead or in the crazy house (Spidey has technically only lost one lover to death), and to top it all off, the guy has heightened senses but only because a deadly accident made him BLIND. I guess you could become an ugly rock man like Ben Grimm, or an uncontrollable monster like Bruce Banner, but when the supergods were handing out powers, Daredevil got his with some major strings attached. 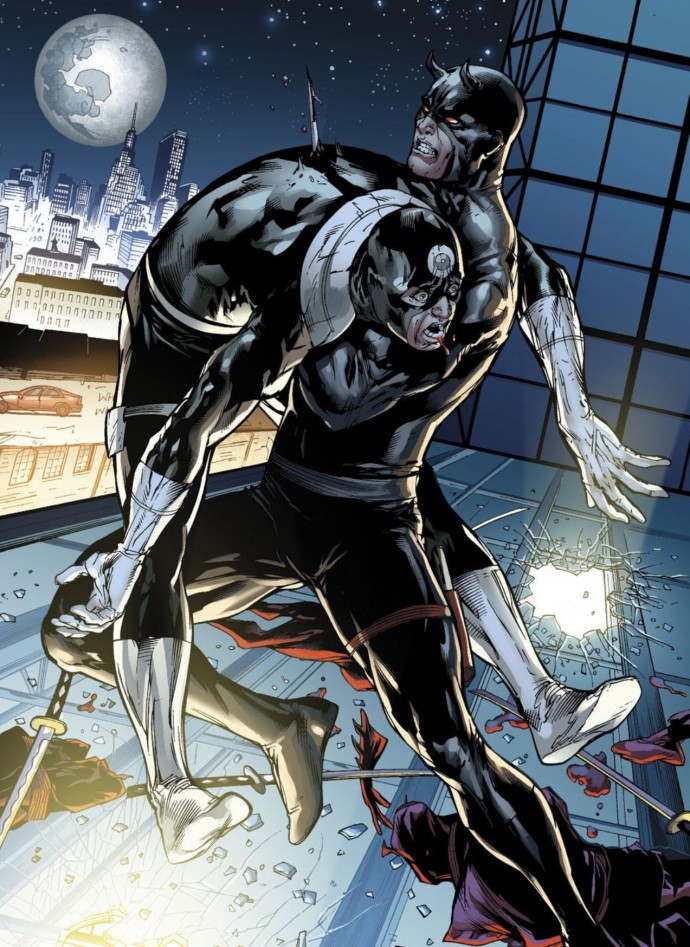 It’s because of Daredevil’s badly dealt hand in life that I’ve always found him and Spider-Man to be brothers in arms. He was one of the first non-Fantastic Four characters to appear in a Spider-Man comic for a team-up story, as well as (more importantly) one of the first heroes to learn Spidey’s secret identity in the classic “Death of Jean DeWolff” storyline. I’ve also long regarded Spider-Man and Daredevil to be New York City’s true heroes. The Fantastic Four and the Avengers are headquartered in New York but always seem to be in other dimensions and galaxies fighting for the protection of Earth and mankind, but Spidey and Hornhead were the local guys. Despite Shadowland’s (the place) ancient Japanese aesthetic, the story enforces on multiple occasions that it takes place in Hell’s Kitchen – a Manhattan neighborhood that is no longer as tough and rugged as Marvel imagines it here, but points for ignoring real-life socioeconomic conditions and gentrification. 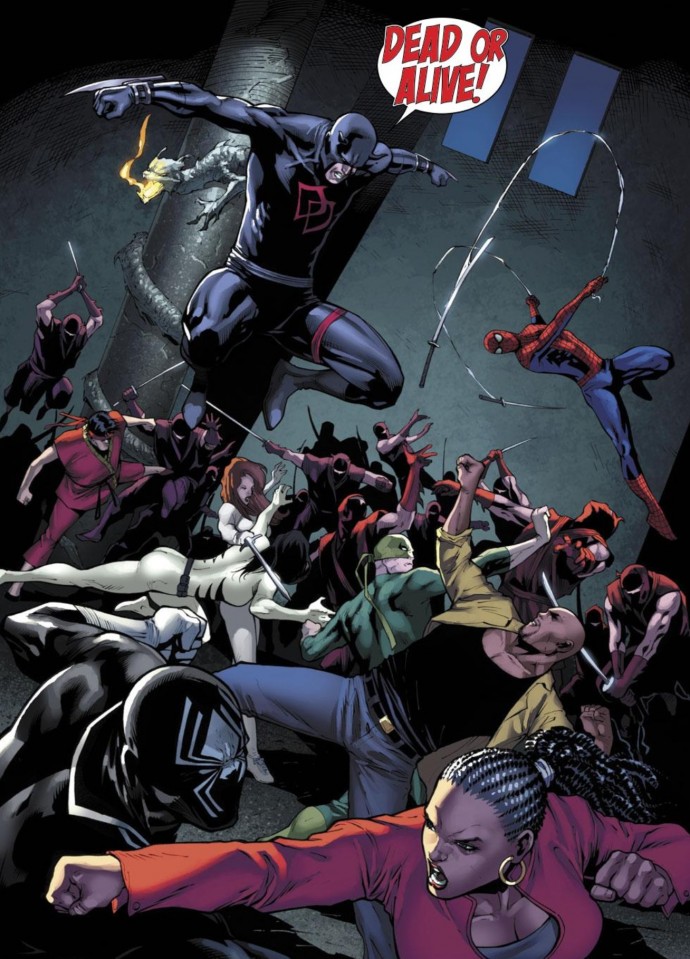 Daredevil’s overwhelming misery is the only thing that makes the concept of “Shadowland” work for me. It’s basically “Dark Phoenix” without the cosmic overtones. Daredevil goes crackers, kills Bullseye and then challenges all of the street-level Avenger characters like Luke Cage, Iron Fist and Shang-Chi (along with some cameos by Wolverine, Moon Knight and the Punisher) to stand with him or against him in his quest to run his empire. The Kingpin stands by and watches his arch-rival spiral down the drain of insanity, and guys like Spider-Man show up to try and talk some sense into their long-time friend. 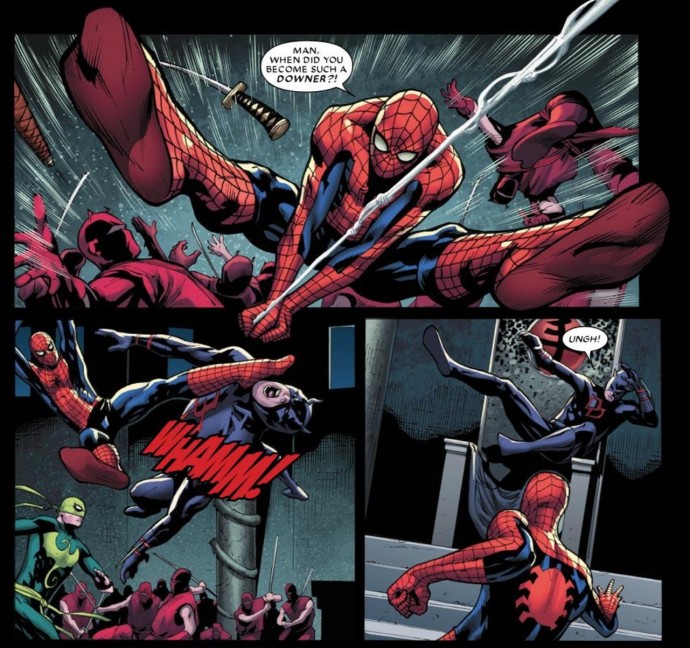 Despite showing up only sparingly throughout the mini-series, Spider-Man is used fairly well in “Shadowland,” providing comic relief, but also functioning as one of the few guys who seemingly stands a chance against the power-obsessed Daredevil. Because of the history and relationship these two characters have, Spider-Man just HAS to be involved in this arc somehow. While the hardcore Spidey fan in me would have loved to see the character have a more definitive moment (it’s ultimately Iron Fist, and later Elektra who land the definitive “blows” that bring Daredevil back to the world of the sane), series writer Andy Diggle crafts a Wall Crawler that feels consistent with the one showing up in his own books during the same time period. So much so, that when crossing over to read the one-shot (which was actually written by current Superior scribe Dan Slott), the tone and characterization didn’t miss a beat, which is a refreshing change of pace to other “events” and tie-ins. 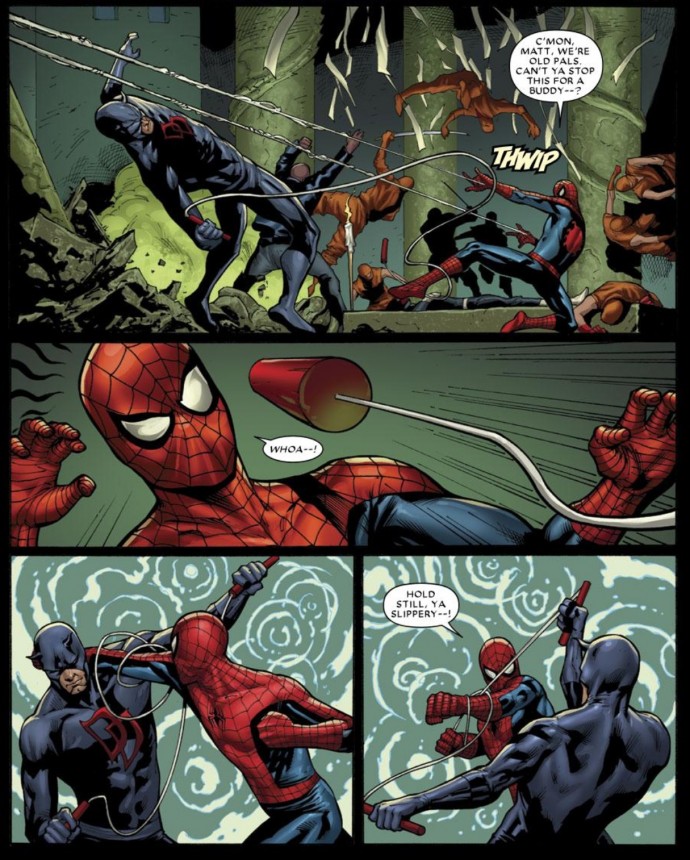 Slott’s one-shot focuses on Spidey’s team-up with Shang-Chi, master of kung fu, in a battle against crime-lord Miser Negative (who refers to himself as Spidey’s greatest adversary, earning a guffaw from the hero who at this point declares Green Goblin as “the guy”). During this comic, Mister Negative adversely affects Shang-Chi and it’s up to Spider-Man to talk him back to the side of good – an obvious parallel to the larger issue going on with Daredevil in “Shadowland.” 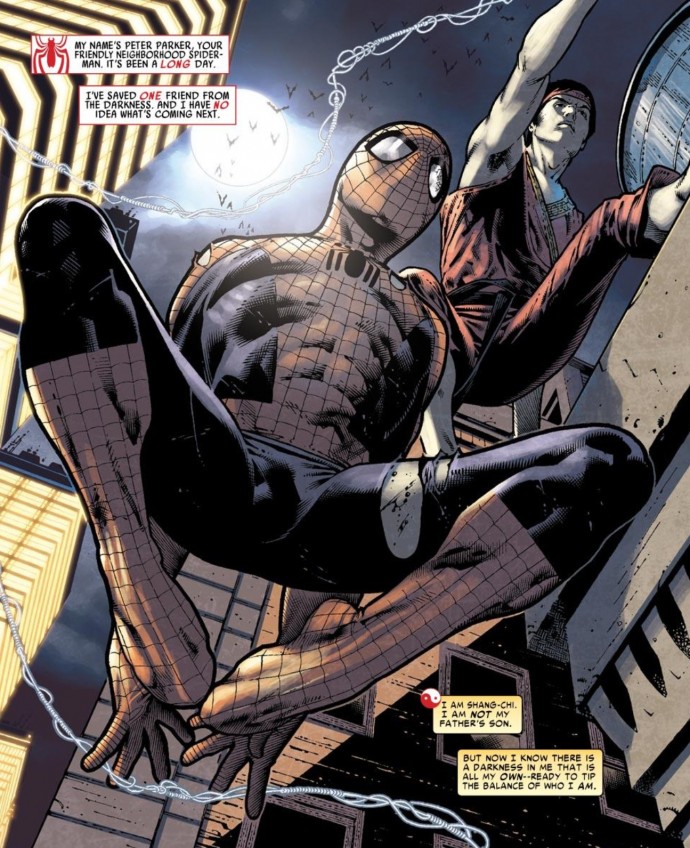 Like the main mini-series, it’s a well executed enough one-shot, and probably a better read than the “Fear Itself” and “Age of Ultron” Spidey-centric minis and one-shots released the past two summers, but I didn’t walk away from it thinking I had just experienced something transcendent as a fan of the medium. Ultimately, reading this series just made me question even more why Slott was inclined to resurrect elements of the story for his latest Superior Spider-Man arc. Of course in Superior #14, the Shadowland fortress is toppled in about 11 seconds, dismissing how in “Shadowland,” an entire team of heroes were nearly overtaken by Daredevil and the Hand ninja. So perhaps this callback to “Shadowland” has more to do with it being another instance of Slott reaching back into continuity to demonstrate the awesomeness of his new creation.