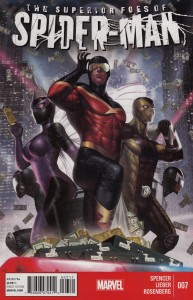 I’m about to come across like a stereotypical comic book fan that asks for one thing, gets it, and still finds ways to be unhappy about it.

In my post about Superior Foes of Spider-Man #4 in October, I lamented about how the only character in the book that repeatedly got any face time and development was Boomerang. I said I enjoyed Fred Meyers as a lead character in a comic, but thought labeling the series “Superior Foes” was an inaccurate description of the story if creators Nick Spencer and Steve Lieber were insistent on making things all about Boomerang, and Boomerang alone every month. For me, the solution was to put the spotlight on some of the other characters in the series, especially Lady Beetle and Overdrive who we knew next to nothing about.

After two excellent plot-heavy issues that put the “team elements” of the series more into focus, Spencer, with fill-in artist Rich Ellis, take a step back and give us the character story I have been begging for in Superior Foes #7 with the origin story of the Lady Beetle, aka, Janice Lincoln. The issue is a striking departure in tone from its predecessors – removing Boomerang’s unreliable narration and spotlighting only Janice’s story from the moment she was a swindling, puppy and birthday cake stealing kid, to the day she hooked up with long-time supervillain the Fixer, and became the new Beetle.

The end result of the issue presents a bit of a “good news/bad news” situation for me. On one hand, I really enjoyed this book, and if I received a well executed origin story of this nature in any other comic series, I would have probably loved it. But Superior Foes, with its zany comedy and outrageousness has set the bar so high, I can’t help but feel a little let down after reading issue #7. It’s incredibly unfair of me to think like this after I essentially begged the creative team to write a story of this nature, but I owe it to my followers to be upfront about my impressions of this issue, even if it makes me sound like the world’s biggest loon (though, in terms of others who use the internet as a bully pulpit, I imagine I have a ways to go before such an honor can be bestowed upon me). 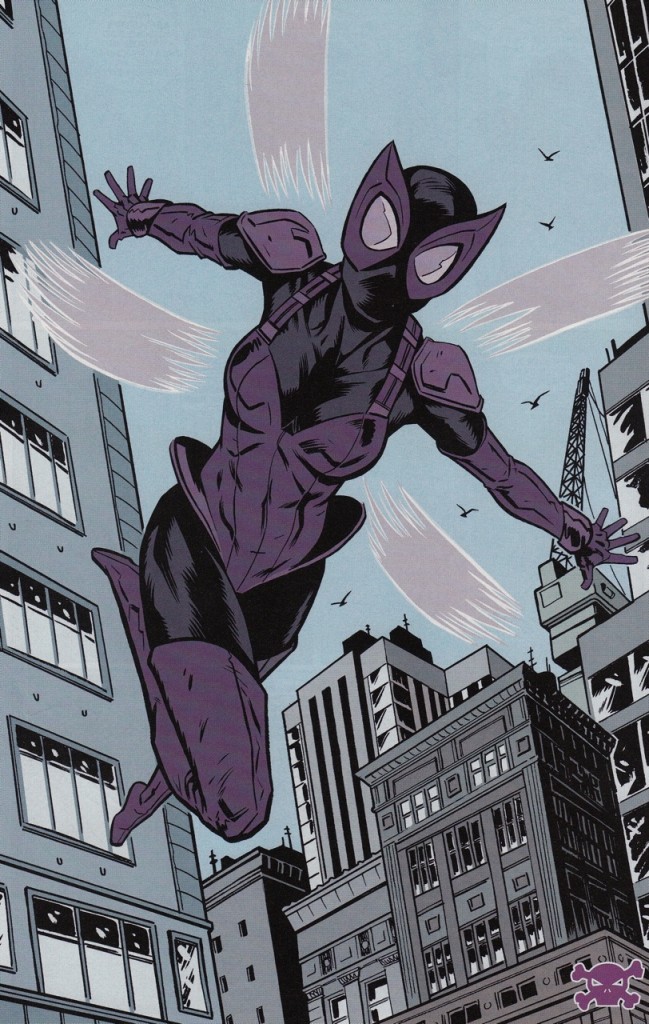 I learn a lot about Janice in Superior Foes #7 – that’s a good thing. I think as readers we should all strive to know everything we can about the characters who star in our favorite books. But I can’t help but apathetically shrug my shoulders at what Spencer and Ellis tell me about Janice and her road to supervillain-dom. Is there anything about Janice’s origin that can be regarded as truly revelatory? Once we all learn last issue that Tombstone is her father, is it really that much of a stretch to develop a backstory that centers on her being a spoiled mob boss princess who is denied entry into the family business as a means to protect her? Isn’t this a plotline from nearly every mob-centric movie or television show that focuses on the main character’s kids?

Early on in the story we are told that Janice wants to become a mob boss, but outside of her idolizing her father, I don’t think Spencer fully explores why she wants this. Outside of being a bratty kid, why did Janie rip off another girl during her birthday party? Does Janice feel validated by her valedictorian status, or cheated because she needed the help of her father and his henchmen to get there? Given how she skates through the first 20-something years of her life as Tombstone’s daughter, why does she decide that her graduation is the moment she scoffs at getting a car, and instead wants to be a criminal?

It goes back to that old saying: “show me, don’t tell me.” Without Spencer’s script telling me about Janice’s intentions, I don’t think any of her actions convince me that her career trajectory is organic. Does that mean I didn’t enjoy the story? Of course not, but I also don’t think this issue is the mind-blowing character moment it had the potential to be.

I do think the ball is dropped by Spencer when he doesn’t push Tombstone’s gender biases a bit more. Tombstone laughs at his daughter when she mentions she wants to be a boss, which certainly can be perceived as providing some motivation for Janice to prove her father wrong. But then later on in the issue, Tombstone backtracks when he calls his daughter to celebrate the anniversary of her first “heist.” He tells her that his reluctance for her to join the criminal ranks was never about her sex, but instead was for her own good. Sorry, but as I said a few paragraphs earlier, I’ve heard that excuse in popular culture before. I’ve come to expect something a little more creative out of this series. 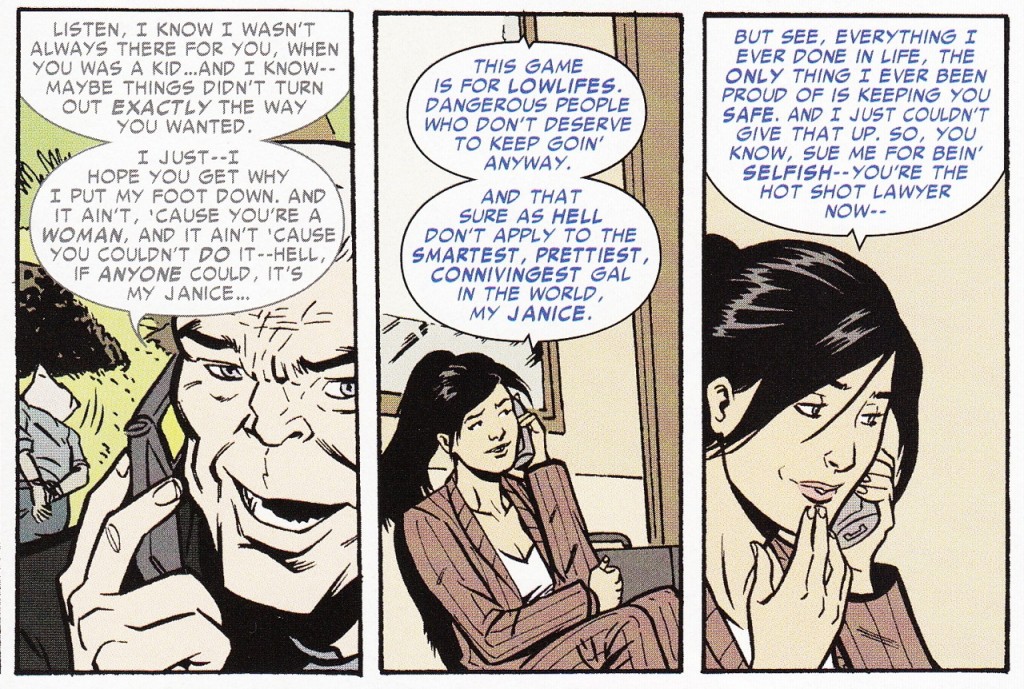 Superior Foes #7 unquestionably lacks the comedic spark that come with the six earlier Boomerang issues, but it does deliver some genuinely funny moments (though very few laugh out loud ones). And most of them come courtesy of two of Marvel’s long-time stalwarts of villainy in the Fixer and Baron Zemo. The meta-ish argument about “creator rights” is particularly funny, as is Zemo complaining about how Captain America is able to forgive Bucky for being a brainwashed hired KGB gun, while he continues to be labeled as a Nazi bad guy.

Also, Lieber’s art has become such a part of the Superior Foes experience, that even with Ellis doing his best to fill in and imitate the aesthetic of the previous six issues, the change of pace makes it hard for me to settle in and enjoy the book. I know it’s pretty demanding for me to expect the same artist out there month after month, but there are certain series where the art is as essential to the story as the script, and Superior Foes is one of those series. 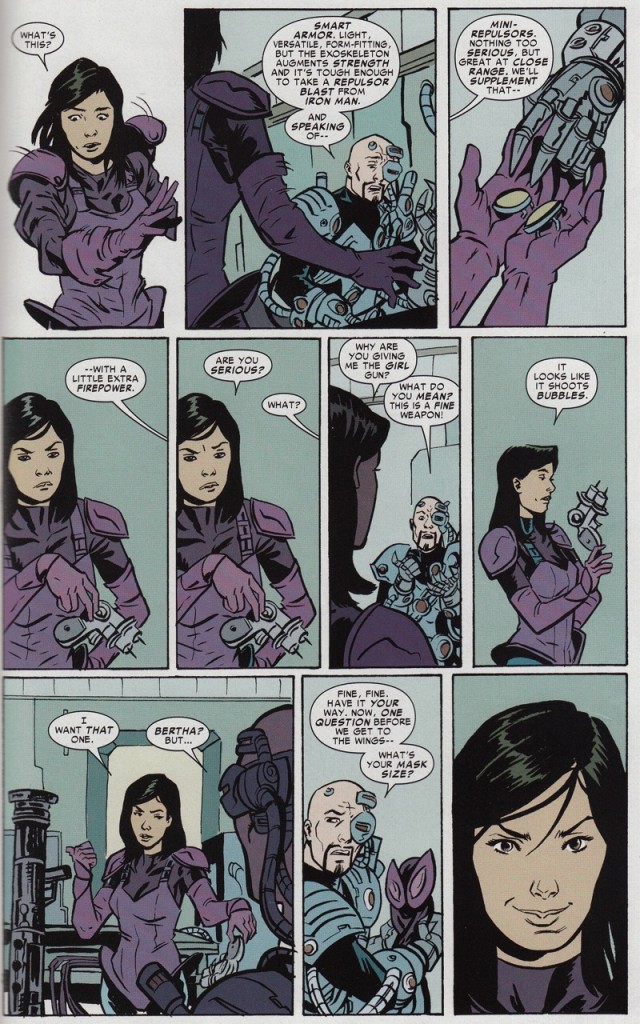 Perhaps my biggest issue with this comic is its sequential placement in the series. While I understand that the Tombstone reveal last month begs some questions about Janice’s backstory, we’re also all smack in the middle of this great Silvermane head/Doom portrait heist that was just starting to pick up some serious momentum the past two issues. Traditionally, standalone, cool down issues have been deployed in-between major arcs. I imagine next issue the focus is going to return to Boomerang and the heist. If Spencer is serious about giving all of his “foes” a chance to shine, I would recommend that he inserts these one-and-done stories at the end of an arc, or if he gives his characters a few consecutive issues to tell a story from their perspective.