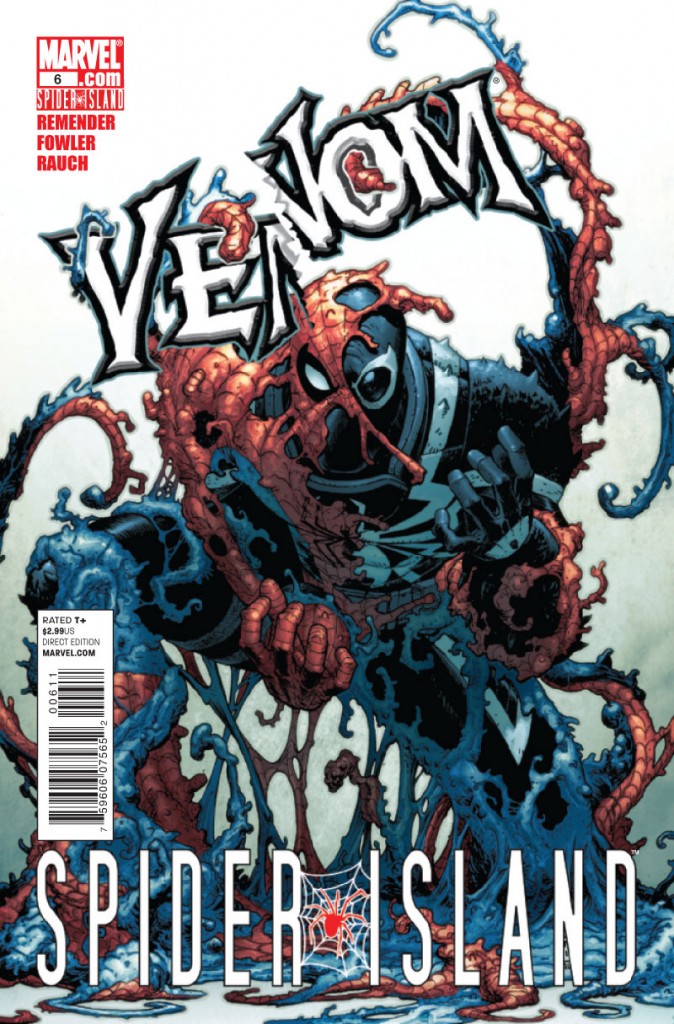 The past three issues of Marvel’s new Venom series have unexpectedly gotten me hooked, so I’m not ashamed to say I was looking forward to seeing how the comic was going to be tied-in to the greater Spider-Island storyline. After reading Venom #6, I came away thinking that the new series, being driven by old-school Spidey supporting character Flash Thompson wearing the symbiotic suit, is going to be a critical crossover and required reading for the duration of Spider Island. 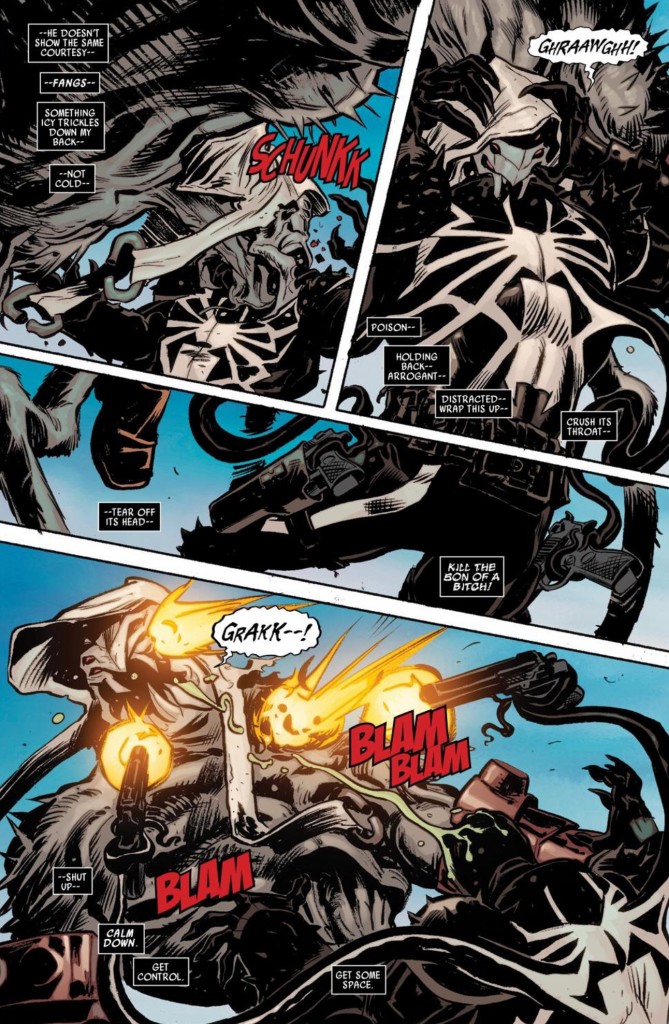 The Venom series is also a great example of how the changing dynamics of comic book publishing can be a good thing for creative teams trying to bring supporting characters into a major core title’s storyline (a point I’ll probably end up repeating when I get to the Deadly Hands of Kung-Fu Spider Island issue later this week). Back in the 1990s, Marvel tried to stuff as many guest appearances and plot as possible into the 14-part Maximum Carnage, but the end result was quite flabby and uninteresting because all of the storytelling took place strictly within the confines of Spider-Man comic books. The best example of missed opportunity during Carnage came with Venom. At that point, Venom was Eddie Brock, a man with a lifelong grudge against Spider-Man but who aligned himself with the hero in order to fight off a greater threat, Carnage. At that point in history, Venom’s alliance with Spider-Man was the first case of him clearly playing the hero, yet a lot of potential characterization was lost because the focus was still very clearly on Peter Parker/Spider-Man. Perhaps if Venom had his own series that tied-in to Maximum Carnage, or even a three-part miniseries, like we’ve see with Cloak and Dagger and Spider-Girl, his role in the crossover could have had more substance. Instead, Venom became more of a caricature that has taken years of new writers and artists to undo. 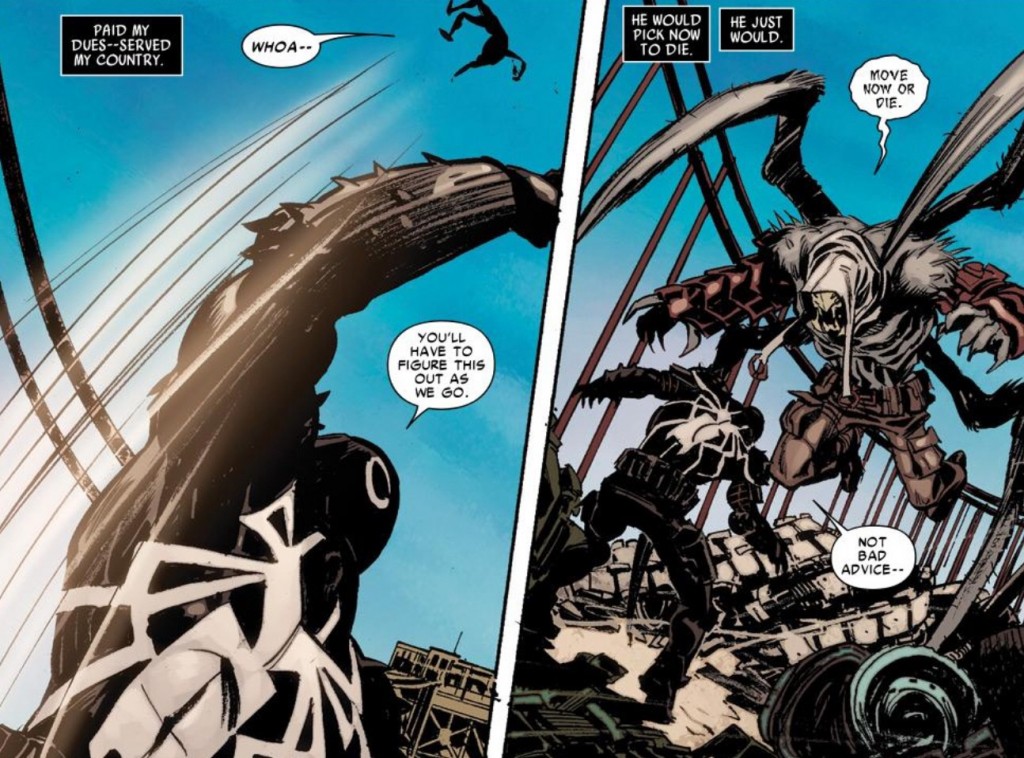 And while Rick Remender’s Venom series does have a bit of a Michael Bay-feel to it, complete with big explosions and violent firefights, the creative team does a fair amount of characterization with Flash that still makes for a reason to come back each issue. I’ve really bought into the “Flash as Venom” story for many reasons, primarily: 1) Flash’s own complicated history with Peter Parker/Spider-Man physically combined with the symbiote’s hatred for Spidey makes for good drama. 2) Flash’s complicated relationships (in non-hero form) with girlfriend Betty Brant and his deadbeat alcoholic father keep finding their way into the comic. 3) Because his missions as Venom are covert government operations, there’s a nice conflict each issue based on the fact that Flash thinks he’s doing good, and Spider-Man, unaware of why Venom is back and who is wearing the suit, doesn’t know what to make of the situation, but is inclined to be distrustful. Those are three pretty significant subplots, so I can only imagine the difficult of trying to break those in just within the confines of two Amazing Spider-Man’s every month.

So how is the Venom symbiote going to react in a New York City that’s overrun with Spider-Man imposters? And how is Flash, a relatively weak person mentally/emotionally going to cope with the violent, potentially homicidal urges from his super-powered alien costume? While Venom #6 dealt with Flash’s battle against a giant spider creature that actually was a mutated version of Steve Rogers (aka Captain America), I suspect that character-driven question is going to ultimately be the pivotal plot-point throughout this tie-in. And whereas some of the Spider Island miniseries will see chapter about those respective characters come to an end by the conclusion of Spider Island, it seems as if Venom will go strong for at least a few more issues beyond Spider Island. Perhaps only Spider-Man himself will have more fallout to contend with when this storyline is over, and it’s great to see some of Marvel’s “B-List” titles get that kind of attention during a big mega-crossover. 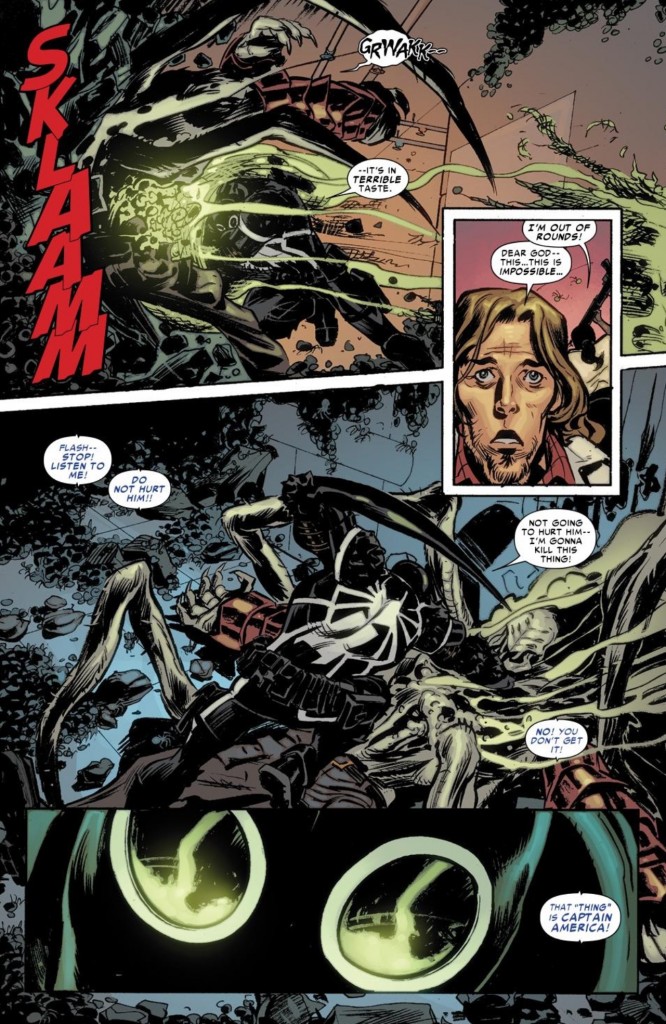